A worthy successor to the Samsung Gear Sport that boasts an attractive design and handy new features for the price.

What is the Samsung Galaxy Watch Active?

When a company releases an “active” watch or phone, we anticipate something that looks rugged or chunky. Samsung has turned this concept on its head with the Galaxy Watch Active.

It has exercise tracking features like GPS and a heart rate sensor, but is actually much smaller and slicker than the standard Galaxy Watch, and we definitely think it looks better. If you want a round version of an Apple Watch 4, the Galaxy Watch Active gets close. However, it also loses out on two of the key appeals of Samsung’s Galaxy watches – the battery doesn’t last anywhere near as along and there’s no rotating control dial.

We miss those physical features, but despite that the Samsung Galaxy Watch Active is still a successful, likeable wearable. 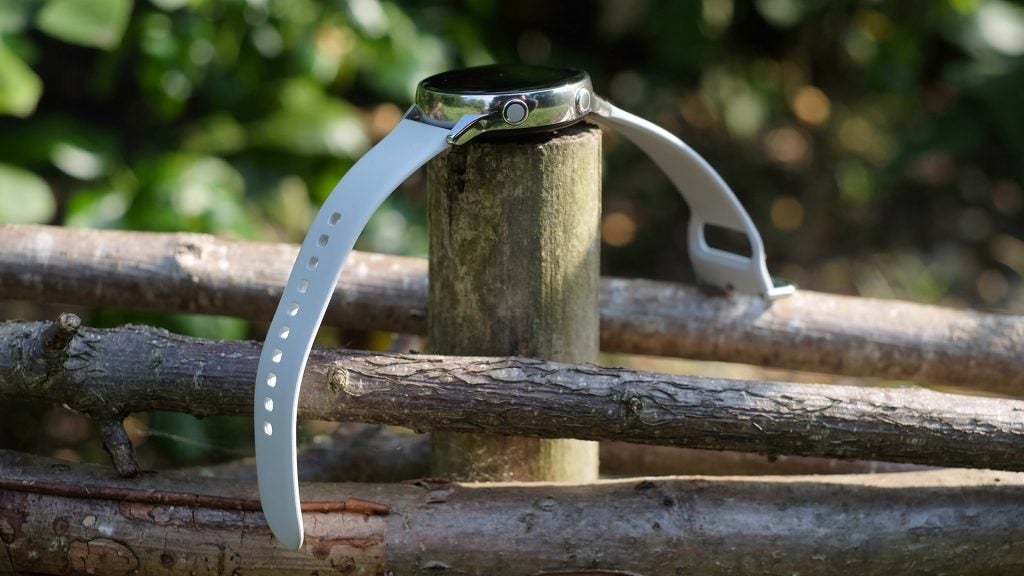 Most Samsung watch-like wearables are quite masculine. They have big faces, chunky bezels, and they mimic the style of traditional watches.

The Samsung Galaxy Watch Active is different. Its design inspiration seems to be the Apple Watch rather than a crusty chronometer.

There are no numbers around its sides, just a roughly 7mm border beyond the display and then a sliver of metal. Most non-Apple makers tend to favour steel when making the shell of a smartwatch like this, but the Galaxy Watch Active is aluminium. 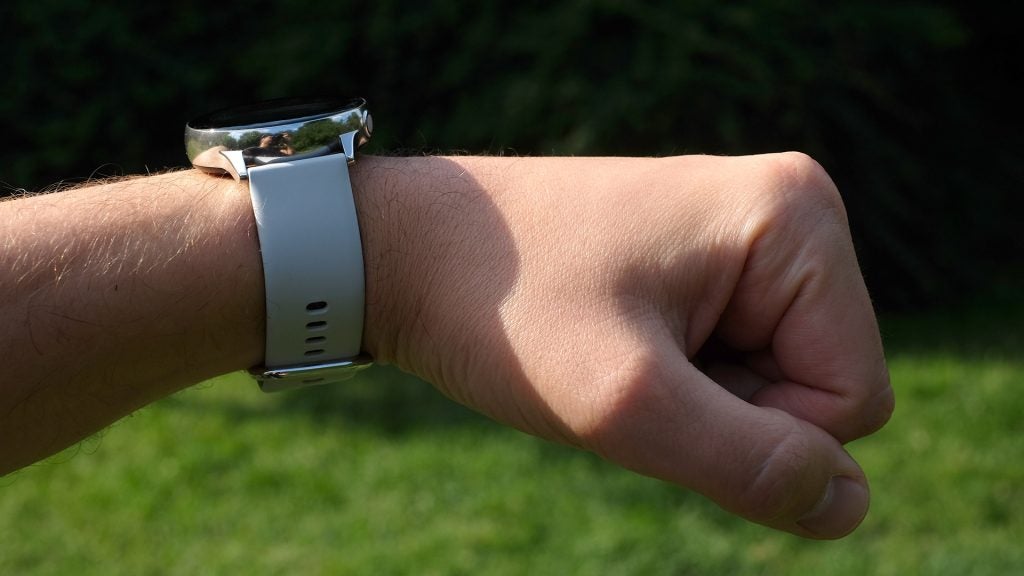 Steel is harder and less likely to scratch, but aluminium is more lightweight. Samsung probably uses aluminium primarily to lower the cost rather than the weight. But for now at least, my Galaxy Watch Active still looks as good as new. There are no visible scratches after a couple of weeks’ use.

However, I have mixed feelings on the strap. You can easily remove it from the Watch Active’s, as it’s held in place with 20mm standard bar fixtures and the default strap is made of soft-touch silicone. It’s not the stretchiest, but looks great.

But I’m not at all convinced by the style of strap clasp Samsung seems to want to use in all of its new wearables. 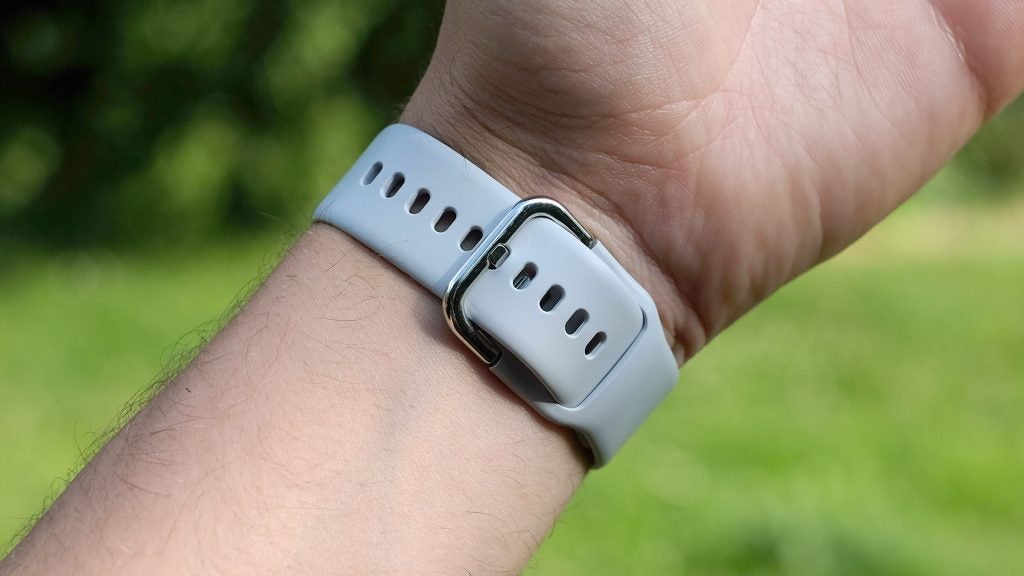 In one sense it’s much like a normal watch strap, but you have to tuck the loose end underneath the other half. It may look neat, but is more fiddly and less comfortable than a conventional style.

If I was planning on wearing the Galaxy Watch Active for the next year, I’d serious consider replacing that strap.

In general, the design certainly has its benefits. As it’s far smaller than something like the Garmin Fenix 5 Plus, the Active doesn’t move about as much when you go for a run. It feels more at home on your wrist. As different as the general look and feel are, the control style is arguably the biggest difference between the Active and standard Samsung Galaxy Watch. The “original” has a clicking rotating bezel used to navigate through the interface. The Active just has a touchscreen and a couple of buttons.

Here’s the issue; the software still looks like it has been made with the bezel control in mind. App icons form a ring around the edge of the screen, and animations still turn clockwise or counterclockwise, even though you now swipe left or right rather than around. The shape of the screen bears little relation to the workings of the interface, and that’s a shame. 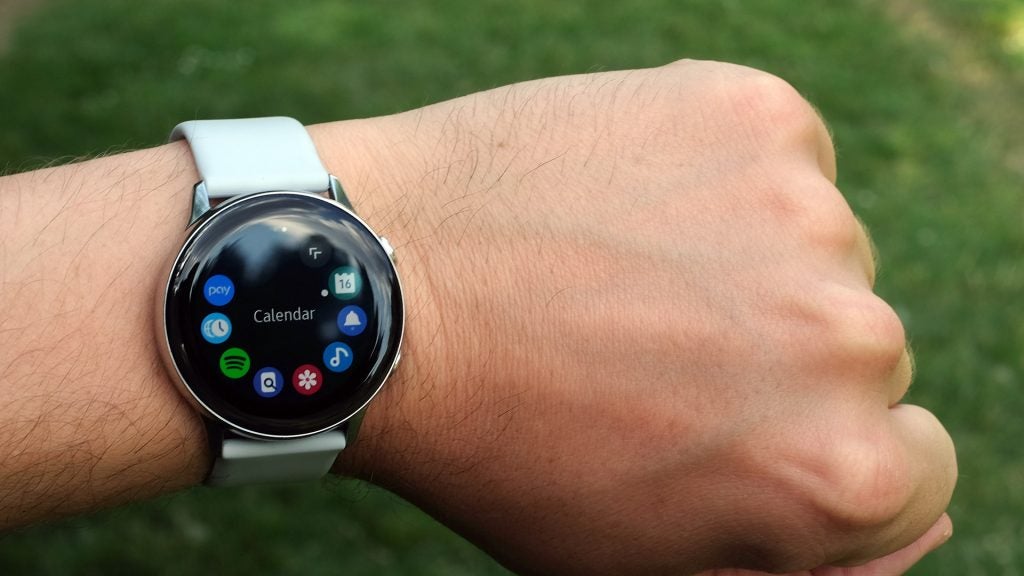 I do find operating the watch a little fiddly. The Galaxy Watch Active’s screen is also a little smaller than the standard Galaxy Watch’s, at 1.1 inches (versus 1.2 or 1.3 inches depending on the model), but the resolution is the same 360 x 360 pixels. That’s a lot of punch for such a small screen, so the display appears sharp unless you peer very closely.

Brightness is brilliant too, and this is more important. You can set the brightness yourself manually, but there’s also a mode that effectively adjusts it automatically in different light conditions. When maxed out, the Watch Active looks extremely clear even under bright sunlight. At this price, only a transflective display like a Garmin Vivoctive 3‘s will look clearer during the day. The Samsung Galaxy Watch Active has great fitness tracking hardware. There’s built-in full GPS, so you can go for a run without your phone and not lose out on any data, and there’s a heart rate sensor on the back of the watch. It even has a barometric altimeter, which works out how many flights of stairs you walk up each day when passively tracking.

This watch is wasted if you simply treat it like a basic tracker, though. The Watch Active really shows off its true worth once you manually start a tracked exercise. 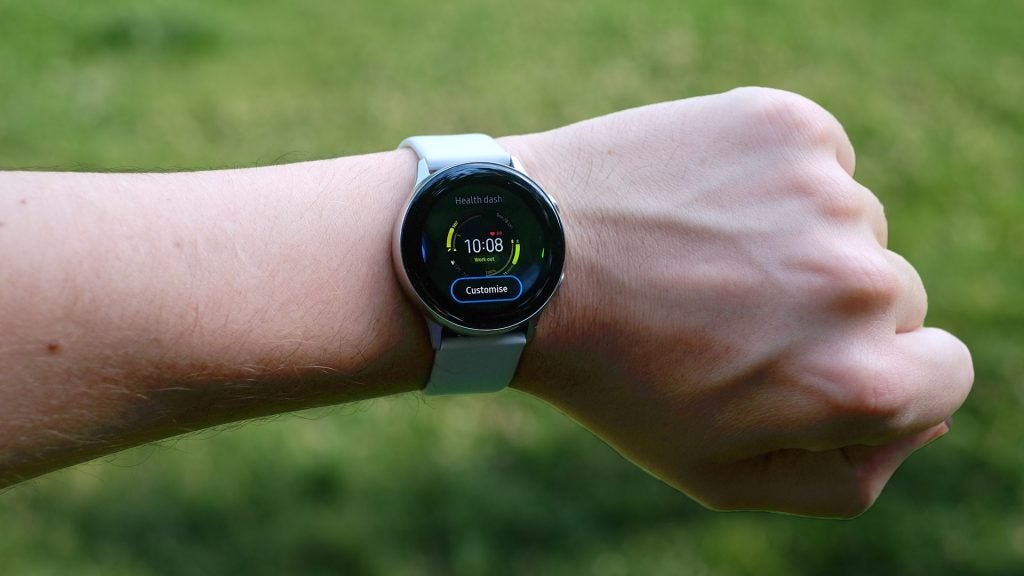 As standard you have to swipe right to left three times from the homescreen to reach the display that lets you start your run (for example). However, you can move these widget screens around to be more convenient by using the Galaxy Wearable app on your phone.

While you run, the Watch Active shows the usual bunch of GPS runner’s watch stats, like pace, heart rate, distance and calories. Just flick on the touchscreen to move through these stat pages. I didn’t miss the rotating bezel in this case, as those swipes feel natural enough.

The watch automatically pauses should you stop for a rest too, and fires up again should you start moving once more. 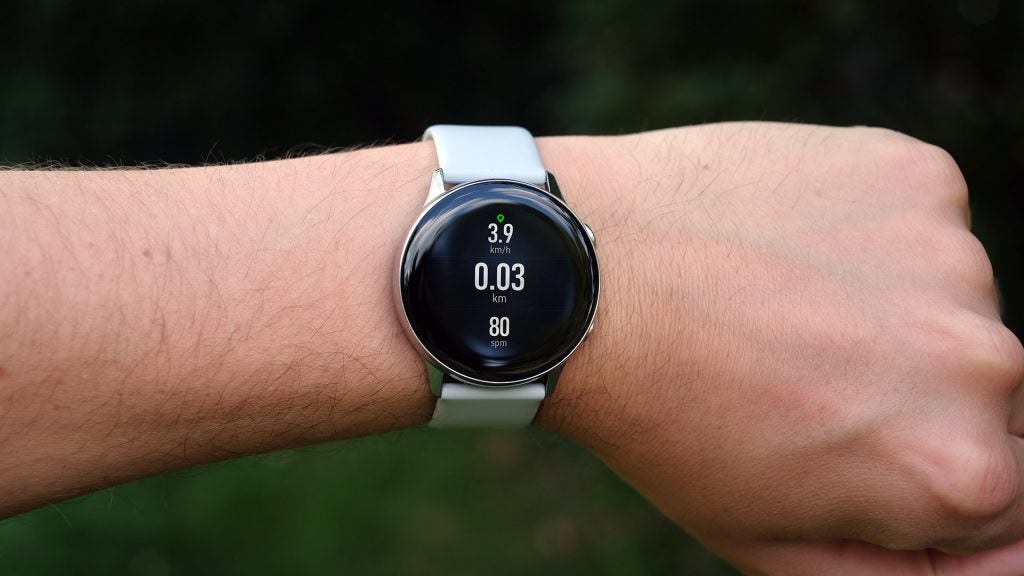 All the data from your exercise ends up in the Samsung Health app, and both location and heart rate tracking are reassuringly accurate. Heart rate readings are similar to the much more expensive Garmin Fenix 5 Plus, and GPS-tracked maps were also spot-on, without “black spots” in the readings; the map you end up with has a thick blue line representing the tracked route, which helps to hide any slight wobbles or off-mark readings.

There’s a huge list of activities that it can track aside from running, but most of the outdoors ones can rely on the same metrics: distance, speed and heart rate. Swimming is a little different, as it uses the sensors to determine the number of lengths, and overall distance. 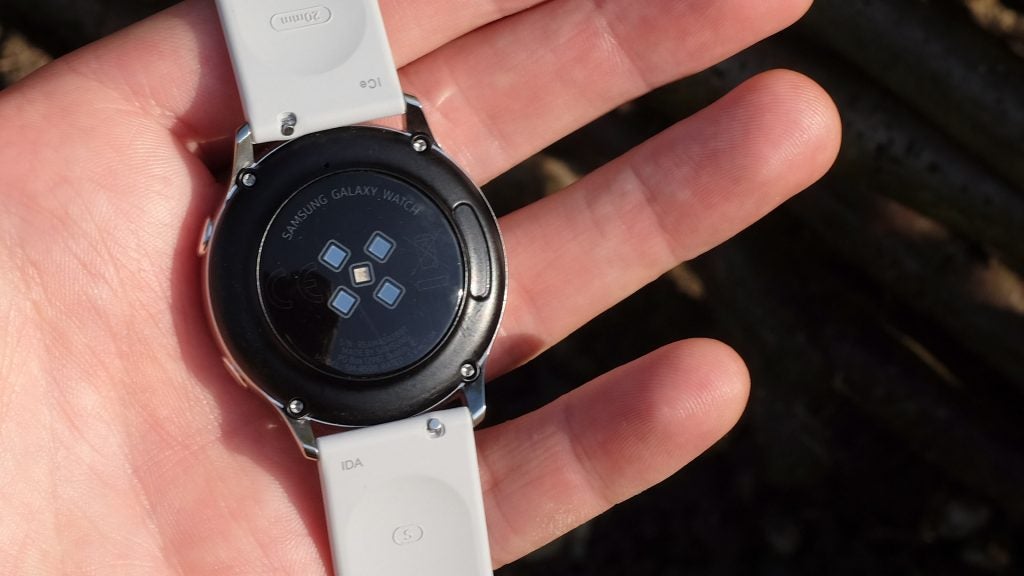 The Samsung Galaxy Watch Active is water resistant to 5ATM, so you can wear it in the swimming pool as well as the shower.

I’d class this as a great tracker for regular exercise. But if you’re more serious about your fitness, a Garmin is likely a better choice. That’s not because of the accuracy of the data, but Garmin’s handling of it. The Garmin Connect app lets you dig deep into the data more easily, and the higher-end Garmin Forerunners series offer useful stats like mid-exercise relative performance scores and heart rate recovery figures.

You are also mostly tied to Samsung Health with a Galaxy Watch Active; the app only lets you link up automatically with Strava.

There’s another impressive extra to the Active: it lets you store music on the watch itself, and connect directly to a pair of Bluetooth headphones to play it.

You only end up with 1.5GB space from the initial 4GB, but it’s better than nothing. GPS and music (or podcasts, if that’s your preference) playback mean this is really a watch that lets you run without a phone.

The Samsung Galaxy Watch Active is a smartwatch too, but not one with all that many apps. You can install additional apps from the Galaxy Wearable app on your phone (or directly on your watch). There are more than you’ll find for a Fitbit Versa, but the question is whether many, or any, are likely to be that useful. 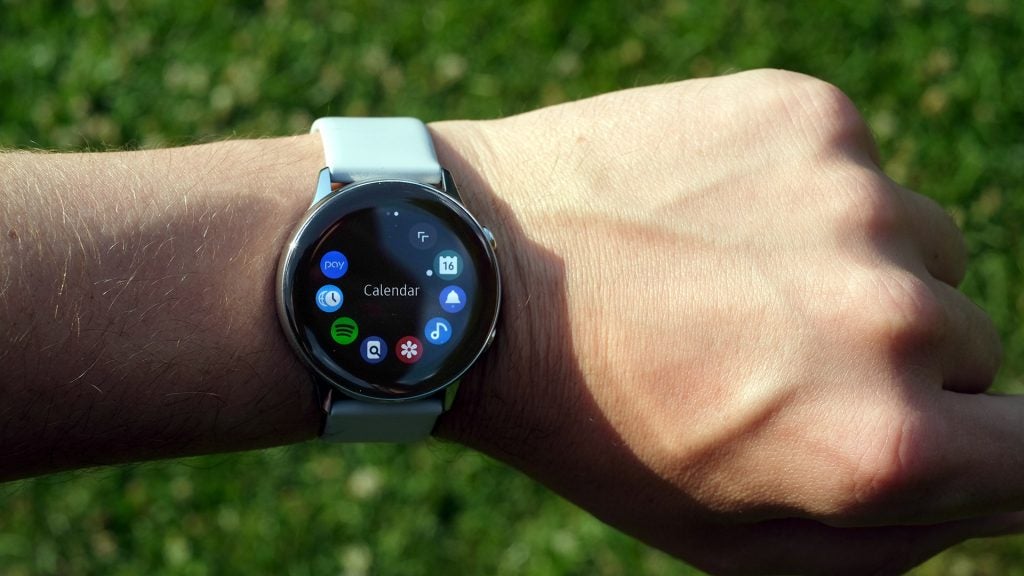 There are controller apps for Philips Hue lights, for your Nest thermostat and a few maps apps. But I’m not sure there’s anything I’d use long-term. There’s just nothing that useful here beyond some pre-installed apps like Spotify and weather.

Samsung does at least show some commitment to making the Galaxy Watch series feel like a smartwatch platform rather than a tracker with some added fluff. The Active has a mic and the Bixby digital assistant. This is pretty much the worst digital assistant around, but you can still use it for some handy things on a watch such as asking for the weather, to set an alarm, or to text someone.

It needs to be connected to your phone to work, but speech recognition is solid enough to make the experience pleasant. A quick double tap of the lower side button activates Bixby.

The Samsung Galaxy Watch also has Samsung Pay, which you wake up by long-pressing the upper button. You link your card to Pay, and can then use the watch to pay for items, just as you would with a contactless card. However, fewer UK banks support it than Google Pay or Apple Pay. At time of writing, Nationwide, the Co-op and HSBC are in, but Barclays, Halifax and Lloyds aren’t. Check the Samsung Pay website for the latest supported banks.

The watch can, of course, receive notifications. These let you retweet right from the watch face, see whole chains of WhatsApp messages, and reply to them with pre-set messages or emojis. It’s a pretty solid handling of notifications – a big step ahead of simpler trackers like the Fitbit Inspire HR.

The Samsung Galaxy Watch Active does everything I need or want a smartwatch to do, although that may not be true for everyone. 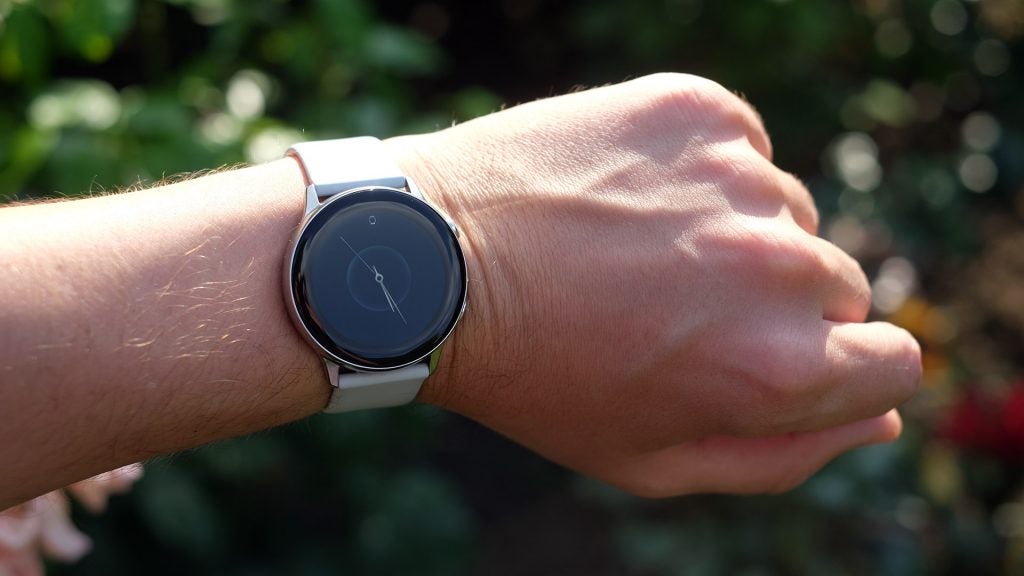 Ready for some bad news? The Active only has a 230mAh battery, smaller than the 270mAh of the 42mm Galaxy Watch, and in another league to the 472mAh of the 46mm version.

Around five days of real-world battery life was one of my favourite parts of the 46mm Galaxy Watch. The Samsung Galaxy Watch Active lasts for around two days before needing a recharge.

Judging by my experience of using it as a run tracker, it should last long enough for a four-hour marathon.

Battery life is OK, but we’re too close to standard smartwatch territory for my liking. The Samsung Galaxy Watch Active also takes a long time to charge up, more than two hours.

It uses a little charger pad that sits on its underside, without any real grip beyond a magnet. I’ve disliked this style in the past as too often the watch is prone to slip off. However, here the magnet seems strong enough to keep it in place, even if it’s not on a flat surface. 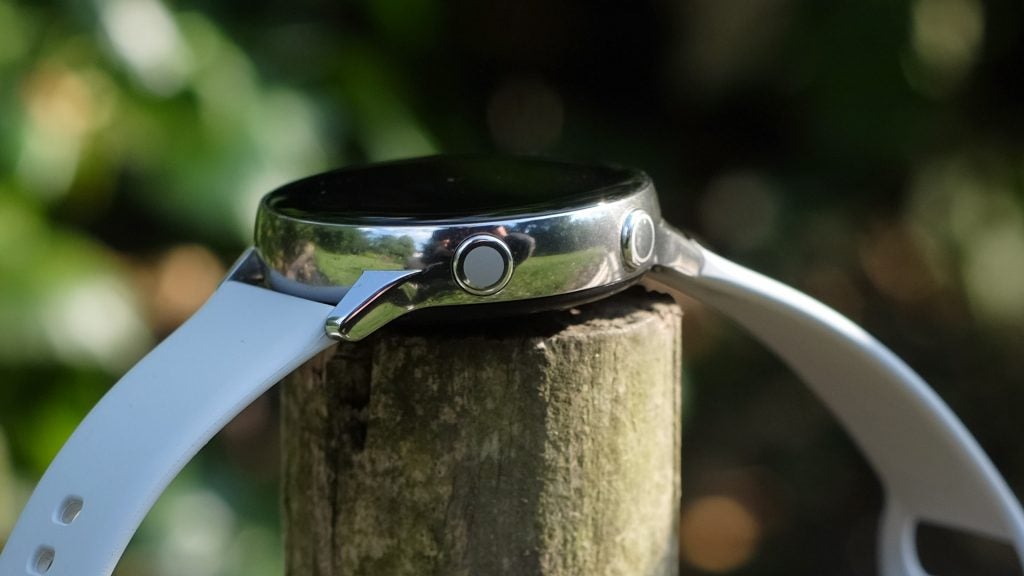 Should I buy the Samsung Galaxy Watch Active?

The Samsung Galaxy Watch Active misses out on two of our favourite bits from the original Watch. It doesn’t have a rotating bezel and its battery life is only OK.

But it’s by no means an instant failure – anything but. It’s probably the most attractive Samsung watch to date, but has kept the same key features as the bigger models while costing up to £100 less.

Sure, it’s higher maintenance and a bit more fiddly to operate than a standard Galaxy Watch, but it’s a great rival to any Android Wear watch or Fitbit Versa series band.

It may miss two of the Galaxy Watch’s best bits, but the Active is still a charming fitness and smartwatch hybrid.