The Galaxy Watch 3 isn’t the Apple Watch-killer Android fans have been waiting for, but it’s still a top notch wearable that ticks nearly all the right boxes.

The Galaxy Watch 3 is the latest flagship wearable from Samsung. Like its main rival, the Apple Watch 5, it aims to offer consumers an all-in-one wearable that can be used for everything from fitness tracking to controlling your smart home tech.

The device was unveiled alongside the Galaxy Note 20 and Galaxy Buds Live and available in 41mm and 45mm (tested) variants, both of which come with optional LTE connectivity.

If you look at its spec sheet, it seems like a modest upgrade on Samsung’s previous Galaxy Watches, adding a smattering of new features rather than reworking the firm’s wearable offering. Highlights include fall detection, the ability to offer blood oxygen estimates and a few small design tweaks.

This doesn’t make the Galaxy Watch 3 the most exciting wearable around, especially given the rumours we’ve heard about the Apple Watch 6. But as before, given the weak state of Android Wear, the Galaxy Watch 3 gets enough right to earn a place as one of the best smartwatches on the market. 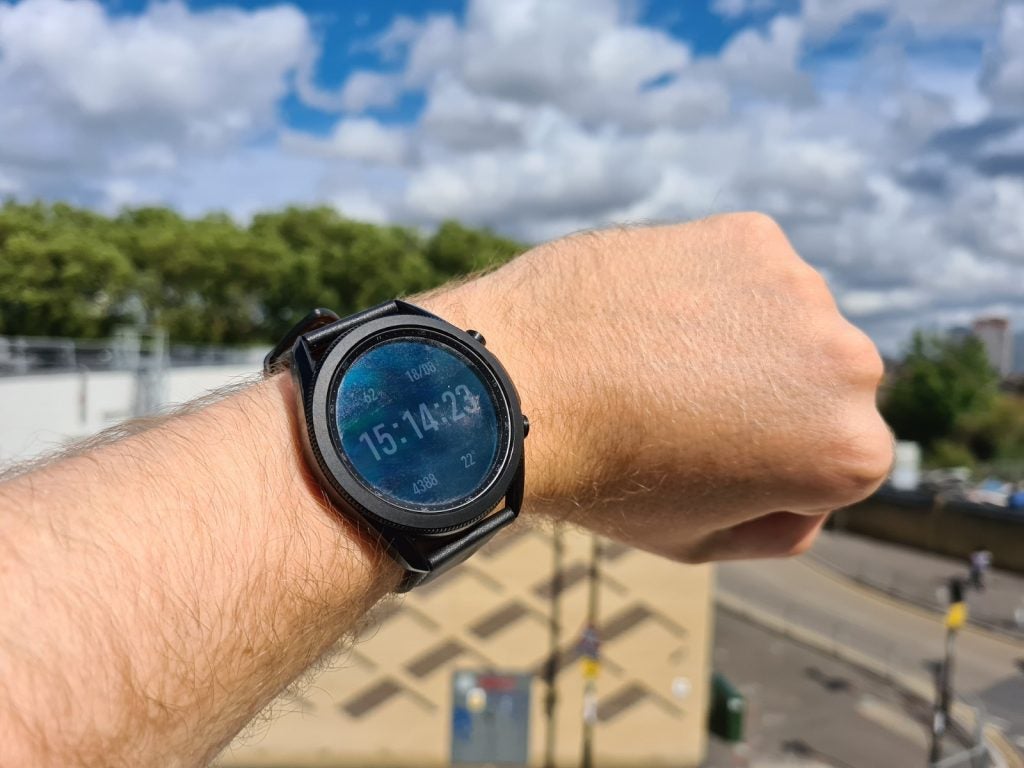 The Galaxy Watch 3 has an Apple Watch rivalling design

The key selling point for Samsung Galaxy Watches has always been the fact they actually look like timepieces. Unlike the square Apple Watch – which has always looked a bit too much like a Blake’s 7 or Star Trek communicator for my liking – the Galaxy Watch 3 has a spherical touch screen design that, were it not for the OLED panel, looks like a normal wristwatch.

Specifically, the Galaxy Watch 3 has a circular 360 x 360 resolution OLED touchscreen that’s housed inside a metallic rotating bezel. Outside of this it has a metal main frame and two side facing physical buttons on its right side. The interface is one of the most intuitive available.

Those who wish to can interact with the watch using purely touch commands, but I generally prefer using a mix of the watch’s touch controls and physical inputs. The top right button acts as the start/stop, select key, while the bottom is the back/home input. The rotating bezel lets you switch between menu screens from the home screen and then scroll through lists once you’ve selected the feature you’re after in a similar way to the Apple Watch’s crown.

The design also feels wonderfully premium and makes the Galaxy Watch 3 one of a select few wearables I’d say matches, if not beats the Apple Watch on aesthetic allure. 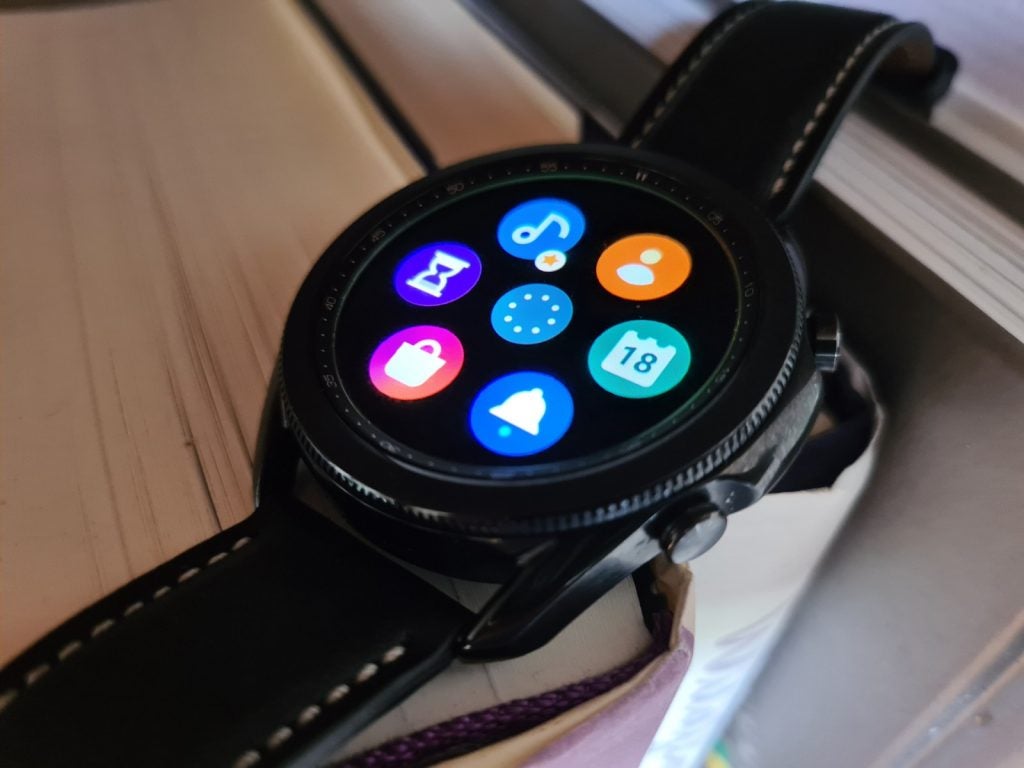 What’s more impressive is how thin the watch is considering the number of sensor’s Samsung’s jammed into it. The device comes with all the sensors you’ll need to keep tabs on your fitness. These include a basic accelerometer, barometer, gyro sensor, light and optical heart rate sensors plus inbuilt support for the GPS/Galileo/GLONASS/Beidou satellite positioning systems and NFC. Add this to the 8GB of on board storage and its spec sheet starts to read more like a Garmin fitness tracker than your average smartwatch.

Despite this, the watch remains suitably thin and light to be comfortably worn 24/7 and, featuring an IP68 rating, can withstand sweat and water alongside many trips to the gym.

My only minor quibble is that, while the screen is wonderfully sharp and vibrant, it still falls behind the Apple Watch in one key area: refresh rate. The Apple Watch 5 was the first wearable to dabble with variable refresh rate tech. Specifically, Apple set it up to be able to intelligently switch between 1-60Hz depending on what it’s doing.

This means that it can jump to 60Hz if you’re in an app or navigating menus and need a smoother high refresh rate, and drop to 1Hz if it’s just telling you the time. This radically lengthens the battery and is a key feature I’d like to see more wearables adopt. This is especially true for the Galaxy Watch 3 given its high price. 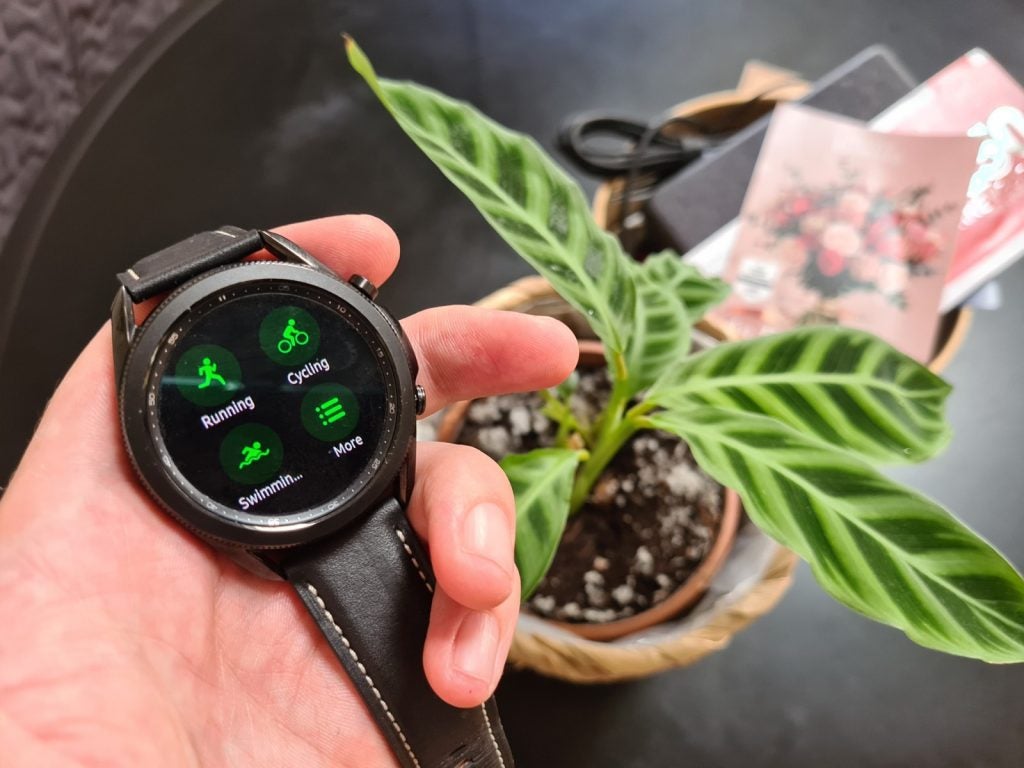 Solid software and decent tracking, but it needs more apps

Galaxy Watches are pretty much the only wearables on the market to run Samsung’s Tizen software. This is the same core operating system you’ll find on Samsung’s TVs and select smart devices. This means that you get apps from the Samsung Galaxy Store.

You’d think this would put it behind most rivals when it comes to apps and services, but given the sorry state of Google’s Wear OS it’s far from the worst out there. To be clear, app support is nowhere near Apple Watch levels. But on Tizen there’s apps for everything from getting directions and the local weather to versions of Tetris and Snake. The watch also supports all the core music services you’d expect, including Spotify. Samsung Pay also makes it quick and easy to make NFC payments using the watch, if you sign up.

The only real downside is that getting local music and maps/routes onto the Watch can be a bit of a faff. Moving files isn’t a simple case of just plugging the watch into your computer. You have to do it via the Galaxy Wearable app. This entails a long winded process of downloading the files to your computer, then manually loading them onto your phone and “sending” them to the Galaxy Watch via the app. It’s as big of a faff as it sounds, especially as it doesn’t recognise mobile downloads direct from YouTube Music or Google Play.

Tracking-wise the Galaxy Watch 3 is also fairly capable. It doesn’t feature any of the top end tracking metrics or extended activity list seen on similarly priced Garmin Forerunner watches, but as a device that’s being marketed as a smartwatch first, that’s not surprising. 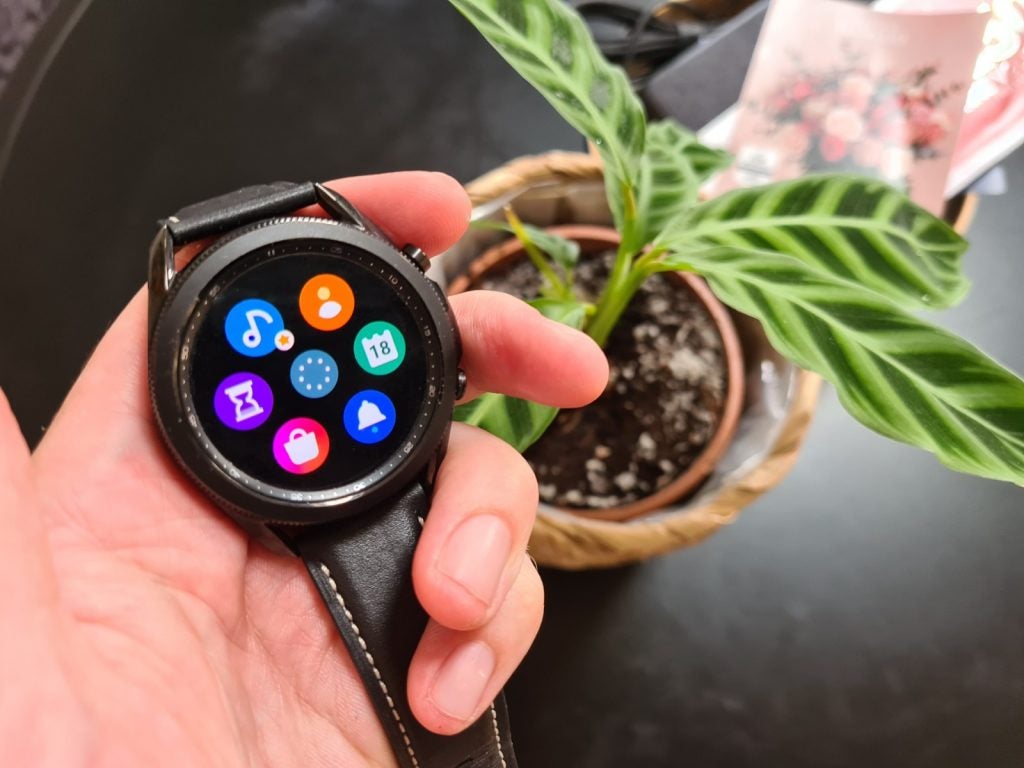 Out of the box it has options to track all the basics: running, cycling (indoor/outdoor), swimming, weightlifting, etc. But it also has a few nifty coaching features. These include a run coach that will offer advice to you mid-run using past workout’s performance data, and guided workouts for specific exercises like free weights.

The running feature will be useful for people new to jogging as they offer key advice like “raise your shoulders” or “take longer strides” when it spots repeating issues with your cadence. The services aren’t as detailed or intensive as what you’ll find on Fitbit Premium or a Garmin Fenix device, but they’re a good entry point for more casual users/gym goers.

Performance data is a similar story. Post workout data is presented in a clear easy to read format that makes Garmin’s look like a VCR manual. You’ll get info on your heart rate zones, distance traveled, calories burned, and estimated blood oxygen level. The latter is a particularly important metric that can be used to spot early signs of medical problems, also offering a general gauge of respiratory health.

I’d put its fitness tracking on par as what you’ll get using a mid-tier Fitbit. The trade off is that it’s not quite as detailed as the information you’ll get on a more specialised, and expensive, tracker like the Garmin Fenix 6 Solar. But that’s hardly surprising given the Galaxy Watch 3’s focus.

It also makes up for this by coming with a few “wellness” and health tracking services – the biggest being fall detection. This works the same way as it does on the Apple Watch and is designed to let the Galaxy Watch 3 tell emergency contacts when you’ve fallen and need help. This is a particularly useful service for people at high risk, or with ongoing health issues. 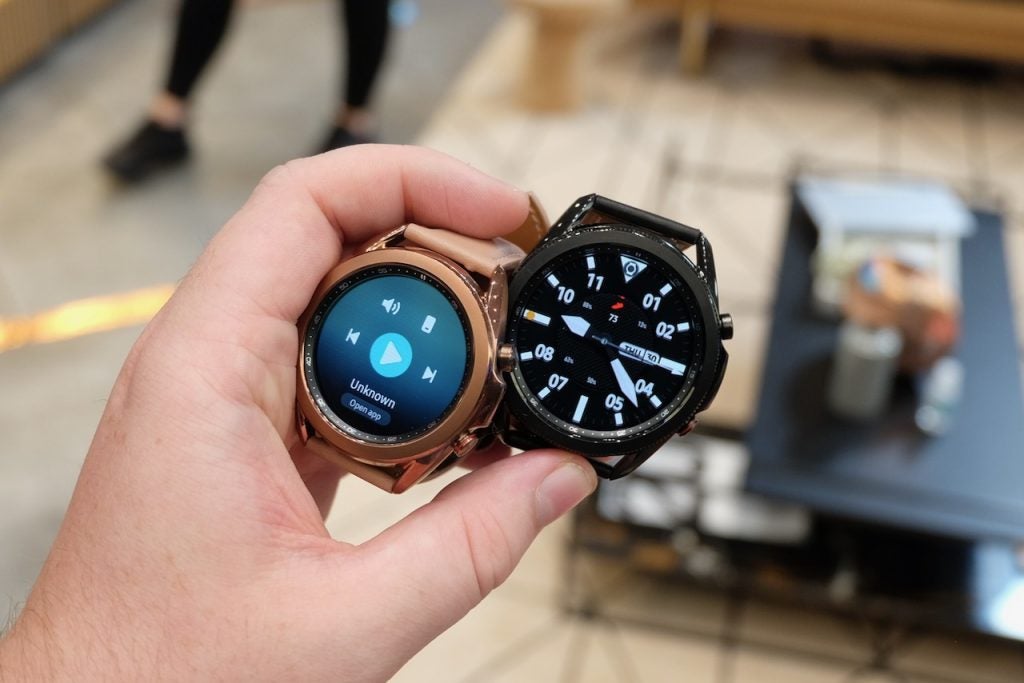 The software’s combined features make the Galaxy Watch 3 feel like one of the most developed smartwatches on the market and one of a select few valid alternatives to the ruling Apple Watch.

The only area it doesn’t match its arch-rival is a big one however. Battery life isn’t stellar, particularly if you plan to use the GPS for regular fitness tracking. Using the 45mm variant, which comes with a 340mAh cell, I found I generally got around 2-2.5 days use if I just used it as a smartwatch with the always-on screen option off.

But when I started using it to track my daily lunch run, the battery life dropped markedly. Using the GPS to track a daily 5km the watch shed as much as 15% of its charge at a time, radically lowering its longevity. By today’s standards that’s pretty poor, even by Wear OS smartwatch standards, which are traditionally the worst of the lot when it comes to stamina.

The only positive is that topping up the Watch 3’s battery is fairly easy thanks to the addition of wireless charging. As an added perk, Samsung’s also offering the Charger Duo wireless pad free with pre-orders of the 45mm Galaxy Watch 3. 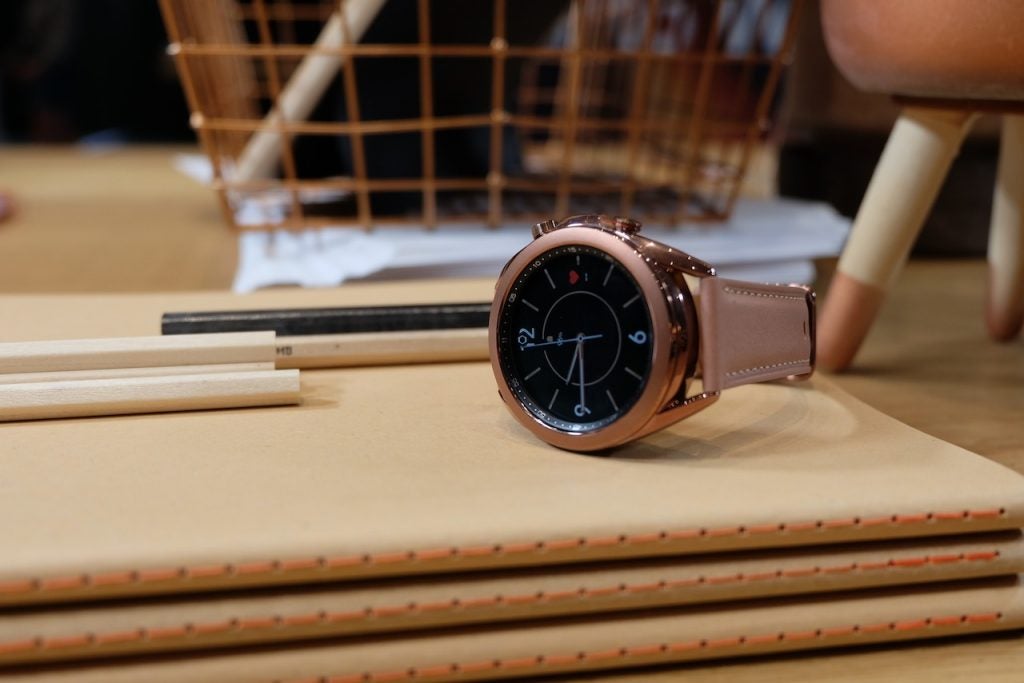 Should I buy a Samsung Galaxy Watch 3?

If you’re after a smartwatch-come-fitness-tracker but don’t fancy the Apple Watch, then the Galaxy Watch 3 is one of the best options on the market.

It offers reliable smartwatch functionality, app support for nearly all the services you’d expect and comes with a surprisingly robust set of health and activity tracking features.

The only downside is that the lack of a variable refresh rate screen, like the Apple Watch 5’s, means its battery life is a little on the short side.