What is the Samsung Galaxy Tab Pro 10.1?

Despite the Pro tag, these are largely just upmarket versions of the previous Tab-series tablets, now with better build quality and a few business-centric apps. This particular 10.1 in model is not quite as exciting as the Sony Xperia Z2 Tablet, but it is better in some core respects, including being £70 cheaper. 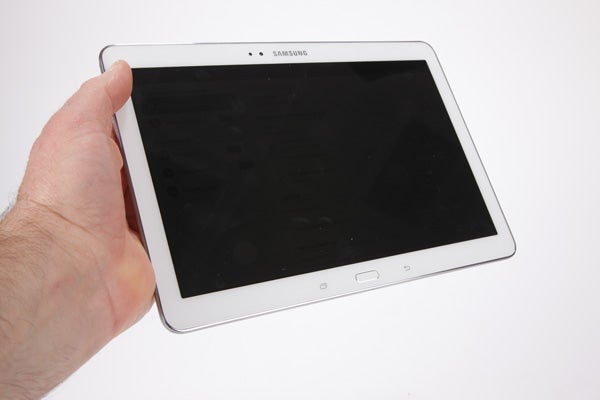 The Samsung Galaxy Tab Pro 10.1 is a 10.1-inch tablet that fits the Samsung mould perfectly. Like most high-end Samsung phones and tablets since late 2013, it has a leather effect backplate that features stitching on its edges, while the sides have a smoky metallic finish.

It’s all fake, though – the back is plastic and the stitching is just an embossed design. So the look is very suspect, but the Tab Pro 10.1’s back is nice and grippy making it easy to get a firm hold on the tablet.

The Samsung Galaxy Tab Pro 10.1 comes in two colours – black and white. The black version has a slightly softer finish that feels a bit better, so go with that one if you’re not too bothered about the colour.

In either shade, it doesn’t have the cool look of the Sony Xperia Z2 Tablet. The fake leather/metal posturing do not a tablet style guru make. 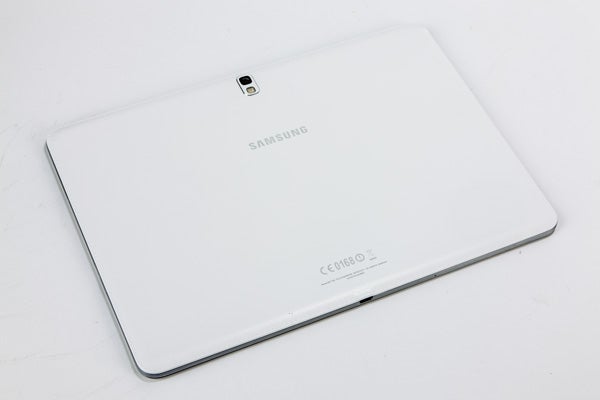 However, the design is relatively modern. The bezel has been slimmed down significantly compared to the older Tab-series models, and the look is almost identical to that of the Samsung Note 10.1 2014 Edition.

It does feature just about all of the hardware bonuses and drawbacks of any 10.1-inch tablet, though. By giving the Tab Pro 10.1 larger bezel areas above and below the screen – smaller ones to the left and right – Samsung has managed to mitigate the widescreen display aspect (‘widescreen’ tablets tend to feel unwieldy), but it’s still a bit big and heavy to be considered ultra-portable. 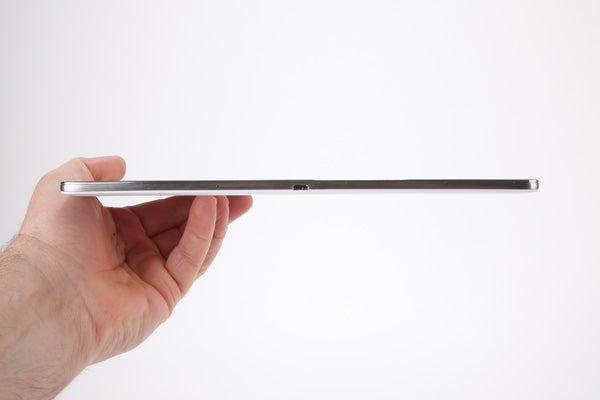 The Samsung Galaxy Tab Pro 10.1 weighs 469g and is 24cm long. That’s not too far off the iPad Air, which in itself is pretty impressive, but we’d recommend considering the Tab Pro 8.4 if you want a super-portable tablet.

Unlike the iPad Air, the Tab Pro 10.1 is intended primarily for landscape use, something which is suggested by the placement of the irksome physical home button and soft keys (Android has moved on, Samsung, and so should you), as well as the logo orientation.

Some of Samsung’s top-end tablets feature a USB 3.0 port but that isn’t the case here, with the Tab Pro 10.1 using the standard USB 2.0 kind. However, it’s no great loss. USB 3.0 offers faster data transfer rates and faster charging from a USB socket, but it is probably not something on which you should base your buying decision. Charging benefits disappear when you get a proper wall charger involved, and while the roughly 13MB/sec data transfer rates aren’t stellar (a 700MB file takes 52 secs to transfer), it’s far from the worst we’ve seen in a tablet. 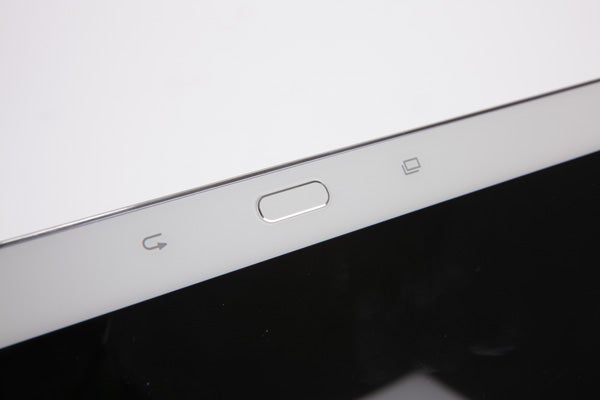 Another reason not to worry is that the Samsung Galaxy Tab Pro 10.1 has a microSD card slot, which gives you another way to move data around. It sits behind a plastic flap on the right edge.

There’s no waterproofing here, but the largely sealed body should be able to handle a light rain shower with no worries anyway.

Specs-wise the Samsung Galaxy Tab Pro 10.1 screen sounds pretty great. It’s a 2,560 x 1,600 pixel display of 10.1 inches, giving pixel density of 299ppi. That’s not all that high compared with the top phones, but is excellent for a tablet. It’s also a good deal higher than the iPad Air’s 264ppi.

It’s a pretty great screen in most respects, but a couple of issues stop it from reaching the heights of the iPad Air, despite its seemingly superior specs. 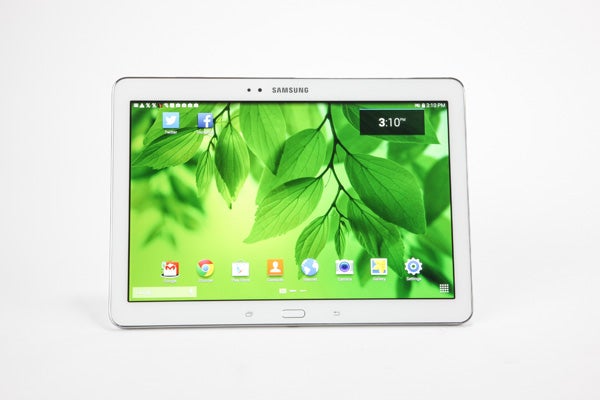 One of them is a direct result of a decision made by Samsung – to use an RGBW screen matrix instead of an RGB one. With an extra subpixel to upset the regularity of a normal LCD screen, there’s a very slight fuzziness to the display – areas of block colour are the worst affected. You do need keen eyes to notice this, but it is something to consider if you’re considering the Tab Pro 10.1 because it appears to have a ‘next gen’ screen.  Sharpness is great, but not flawless.

Why has Samsung used an RGBW matrix? It’s part of the PenTile family of screen types, which Samsung owns the intellectual property of, so it’s ‘in-house’. It also improves battery efficiency when ramping up the brightness as the pure white light isn’t being dimmed by passing through a colour filter. Nonetheless, all told we’d prefer a standard RGB screen.

Another point of note is that there is some IPS glow to the Tab Pro 10.1, which is where the screen backlight’s luminescence becomes overly visible at an angle. It’s a common enough occurrence but some screen deal with it better than others. 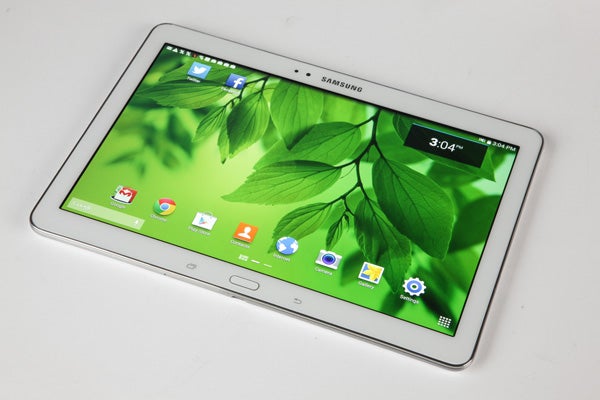 We haven’t been too kind to the Galaxy Tab Pro 10.1 screen yet, but it is generally a very satisfying display. Colours are a lot more relaxed than those seen on some of Samsung’s AMOLED devices, like the Galaxy S3, and Samsung gives you some control over the tone of the screen too.

You can pick between Dynamic, Standard and Movie modes, as well as the adaptive setting that alters display characteristics depending on what you’re doing with the tablet. The tone of the Movie mode is a little warmer than the rest, while Dynamic tries to boost contrast – much like the dynamic mode of a TV. We’d be happy with either the Standard or Movie modes, both of which offer pretty good colour accuracy.

You might expect searing brightness from a tablet whose screen architecture is based around supplying good backlight efficiency. But top brightness is merely ‘good’ – enough for 95 per cent of uses.