What is the Samsung Galaxy Tab Pro 8.4?

The Samsung Galaxy Tab Pro 8.4 is currently the smallest of the Tab Pro tablets. It’s an Android alternative to the iPad mini with Retina display. At £330 it costs a fair bit more than some of its Android rivals like the LG G Pad 8.3 and Nexus 7, but is a quality tablet with some higher-end features than those models. 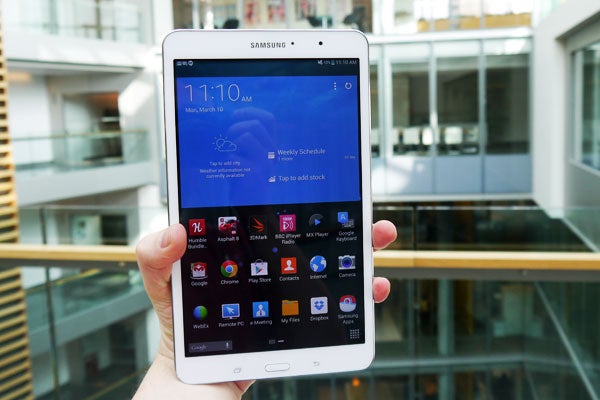 The Samsung Galaxy Tab Pro 8.4 sticks to the design established with 2013 Galaxy phones and tablets like the Galaxy Note 3. Its back is matt textured plastic, rather than the glossy black plastic that was for years a Samsung Galaxy staple.

It has a fake leather effect – complete with fake stitching – and isn’t our idea of class, especially compared with the iPad mini’s smooth metal rear. However, it does offer extra grip and a less tacky finish than glossy plastic.

The sides of the tablet are plastic too, but made up to look like brushed metal. They don’t look too bad, but lack the cool feel of the aluminium sides of the LG G Pad 8.3 and iPad mini. We can’t fault the Tab Pro 8.4’s construction, though. It feels dense, strong – and while we don’t love the design, it is consistent. 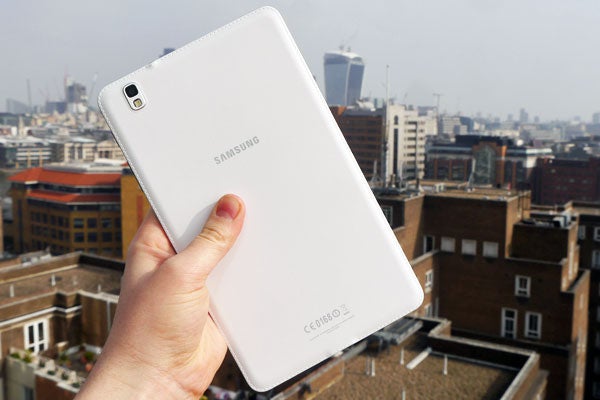 Thanks to its mid-size screen, the Samsung Galaxy Tab Pro 8.4 is highly portable. It weighs just 331g and its 7.2mm thickness makes it easy to slip into a bag. It’s not a device you’d want to operate in one hand, but is light enough to use while standing up on the train on the way to work – from the Tab Pro range, this is the one to pick for that sort of task.

The Samsung Galaxy Tab Pro 8.4’s portability isn’t quite as good as an iPad mini, though. This is a taller, thinner tablet than Apple’s one, and the difference in weight distribution makes it slightly less sure to hold – especially in one hand.

It’s all down to the screen aspect: the Galaxy Tab Pro 8.4 has a 16:10 screen, the iPad mini a 4:3 one. However, it’s a minor point, and something that affects almost all Android tablets. 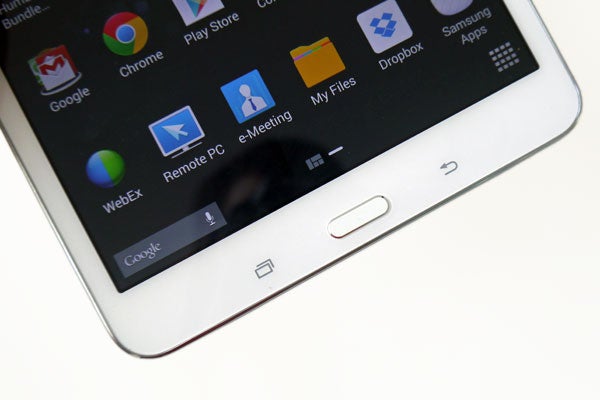 Some of Samsung’s recent tablets have used a micro USB 3.0 port (see Galaxy Note 3, Note Pro 12.2) rather than a normal one, but the Samsung Galaxy Tab Pro 8.4 has a standard micro USB socket. It’s no great loss, though, and the port sensibly sits at the centre of the bottom edge of the tablet.

On the right edge is a little black plastic blip that covers the IR blaster. This lets you control your TV and other home entertainment devices using the Samsung Galaxy Tab Pro 8.4, and is something missing from most lower-end Android tablets. However, as the cheaper LG G Pad 8.3 also has one of these, it doesn’t afford the tablet serious bragging rights. 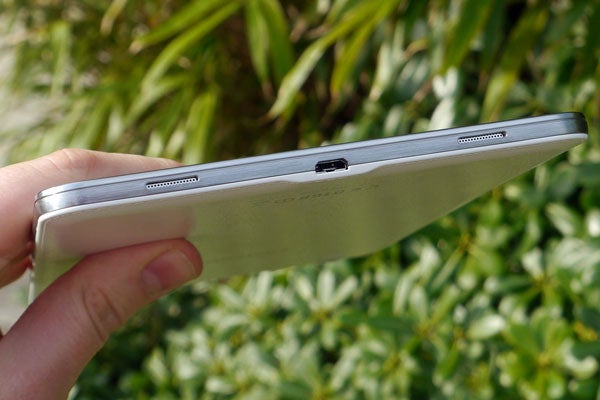 In common with almost all Galaxy-series devices, there’s a microSD card slot on the left edge, covered by a flap. This makes adding to the 16GB or 32GB of internal memory both easy and cheap. However, unlike the Samsung Galaxy S5, none of the tablet’s ports are sealed – the Samsung Galaxy Tab Pro 8.4 is not waterproof or dustproof.

Missing extras like this tell you the Samsung Galaxy Tab Pro 8.4 is a mid-range device in the Galaxy range. However, it is relatively high-end in the 8-inch tablet space. Smaller Android tablets generally try to keep their prices fairly low.