As with the Galaxy Note 3, the Samsung Galaxy Note 10.1 2014 employs a Samsung S-Pen and a Wacom digitiser layer in the screen to offer the stylus functionality that’s still relatively rare in Android tablets.

It’s hardware execution is great. The pen is light, with a triangle-shaped barrel to fit your grip, and it slots into the tablet itself for easy stowing.

As with any stylus, we found it terribly easy to put the S-Pen down and forget to pick up. Unlike the Note 3, the Note 10.1 2014 edition doesn’t seem to have the S Pen Keeper software, which alerts you when you walk away with the device without the stylus attached (we imagine this is because it’s a tablet, not a phone). 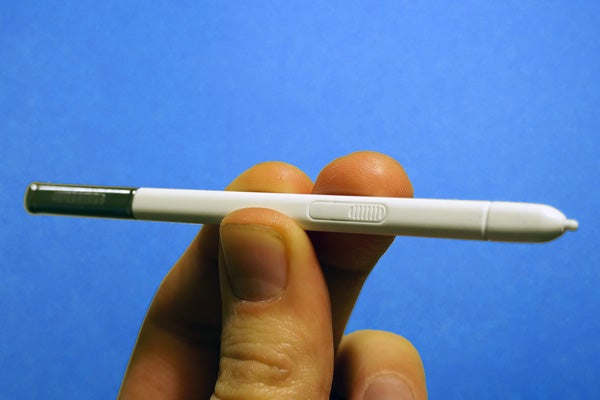 The rubber nib gives a nice level of resistance when you’re writing on the Gorilla Glass screen, and it simply feels far more natural and accurate than the capacitive styluses we’ve tried. It doesn’t feel like writing with a pen on paper, but it’s not a universe apart either.  The stylus also works with the touch sensitive keys, letting you operate the tablet fully using the stylus.

Palm rejection – turning off the capacitive layer when you’re using the stylus – tops off the really quite excellent stylus basics. We’ll look at what you can actually do with it a little later.

Although a little lower than the pixel density of high-end phones, sharpness is nevertheless strong. That said, look up close and you can see a slight fuzziness – particularly in block white areas and in borders between high-contrast colour changes. This is the visible underlying pixel structure in action.

It is caused by the rather unusual screen type used in the Samsung Galaxy Note 10.1 2014. Rather than IPS, PLS or AMOLED, the tablet has a ‘Super LCD’ display. This uses a different pixel structure, featuring a square block of red, green, blue and white sub-pixels – rather than the RGB array of a ‘normal’ LCD panel. This causes the fuzziness we see when looking really close-up.

Is it a serious problem? Absolutely not, but in these days of near-perfect phone and tablet screen we’ve learned to become very critical. If we were being mean we’d call it just-sub-‘Retina’, although this is something of a bastardisation of Apple’s terminology as it’s not apparent from normal viewing distances. 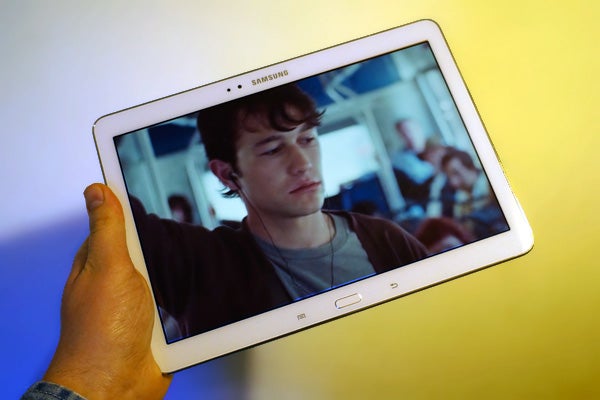 In attempting to gain parity with AMOLED Galaxy phones, colours are quite intense and vivid, but you also have some control over the tone of the screen. There’s a Screen Mode option in the Setting section that offers four display modes – dynamic (oversaturated colours), standard (good), Movie (good, with a warm-skewed colour temperature), and Adapt.

Adapt alters the display quality depending on the app running. The gallery, camera app, ebook reader, web browser and video player all have different settings – but it doesn’t try to alter settings for other apps, which is a sensible move.

In all the modes there’s a slight yellow/warm cast to whites that stops the Samsung Galaxy Note 10.1 2014 from achieving perfect colour accuracy, but it’s very pleasant to look at regardless. It’s an excellent screen that only pedants like us would criticise.