The Samsung Galaxy Note 10.1 2014 runs Android 4.3 Jelly Bean with the TouchWiz interface (not often just referred to as the ‘Samsung UI’) used on just about every Galaxy phone and tablet. Note devices benefit from the feature-packed TouchWiz more than others thanks to the interface’s often-clever stylus integration.

However, TouchWiz isn’t the best-looking UI we’ve seen. In the past we’ve called it colourful, jolly and a little toy-like, but it’s not a look that sits 100 per cent happily with the Samsung Galaxy Note 10.1 2014’s style. 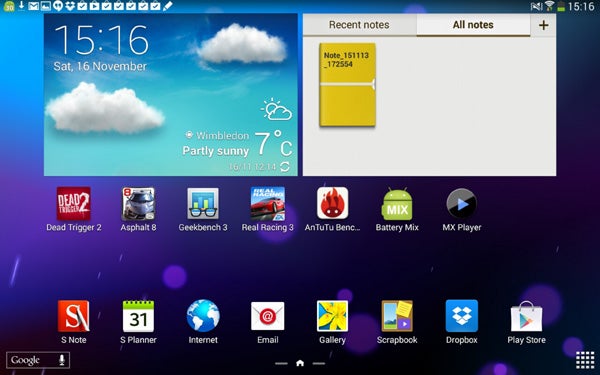 Several oversized interface elements just don’t look that good, such as the oversized green feature switches of the drop down notifications menu. They don’t fit in well with the blue used elsewhere in the Settings menu, and generally don’t look good.

TouchWiz has been added to and added to over the years, and that shows in its visuals. It’s not particularly coherent or cohesive. It’s particularly evident now that we’ve experienced the pure and simple style of vanilla Android 4.4 KitKat in the Nexus 5. 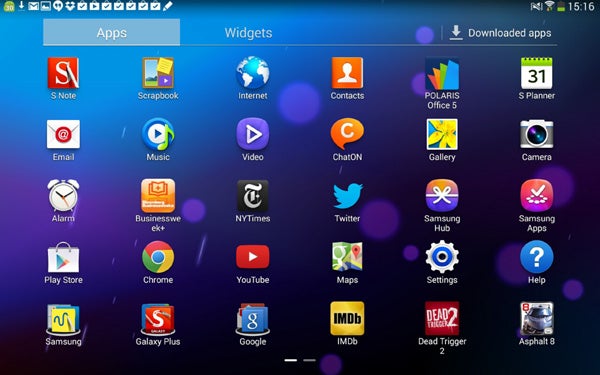 Like the visual issues we had with the hardware, you can get used to the look of of the Samsung Galaxy Note 10.1 2014’s TouchWiz – it just takes a little more effort and patience than some rivals. It’s mostly down to having to learn how to use the immense wealth of features on offer here. We’ll do our best to detail a few of them without boring you to tears –

My Magazine is a very deep, custom integration of the popular newsreader app Flipboard. Just swipe up from the bottom of a home screen and you’re taken to a magazine-style interface of updates from your favourite sources. It’s not hugely different from the normal Flipbook app, but it’s deep rooted into the system.

Multi Window is a feature shared with many other Samsung Android products, but it’s particularly useful in the Samsung Galaxy Note 10.1 2014. It lets you run two apps on-screen at once, by dragging them from a sidebar. Not all apps can be used like this, but there are a few obvious uses. The most likely – we think – is opening two web pages alongside each other. However, you can only run one instance of an app, so to do that you’ll need to use both the Chrome and Android browsers (continued use of dual web browsers is another sign of the overcomplicated nature of TouchWiz). 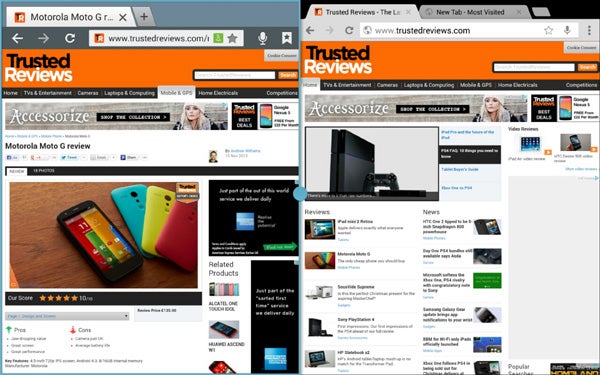 Multi Window lets you read two of our reviews at once

Smart Stay is a little feature that keeps the backlight on when the screen senses your eyes looking at the screen. The idea is that you’ll be able to read an article on the Samsung Galaxy Note 10.1 2014 without having to worry about it switching the screen off. In typical Samsung fashion, it alerts you with a notification whenever it thinks you’ve moved away, making it less invisible than it would be is executed by some other manufacturers. This is really the sort of feature that should work in the background silently.

Blocking Mode lets you turn off notifications during certain hours, ensuring the Samsung Galaxy Note 10.1 2014 doesn’t wake you up. These are just a few of the many extra features in the tablet. And they vary between being extremely useful and things that simply complicate matters.

All the extra bloat doesn’t seem to help performance either. Despite being extremely powerful, the Samsung Galaxy Note 10.1 2014 is not entirely lag-free. There are fairly common stuttery moments when navigating through the system. This shouldn’t happen in a tablet with specs like the Note 10.1’s – it certainly wouldn’t be like this with vanilla Android 4.3 or 4.4. We did notice a few glitches too, particularly in the camera app, which
booted us out to the home screen on a number of occasions.

The Samsung Galaxy Note 10.1 2014 processor varies depending on whether you’re using the 4G, 3G or Wi-Fi only model. We’re looking at the Wi-Fi edition, which has the Octo-core Exynos chip first seen in the Samsung Galaxy S4 (not the UK model, though). 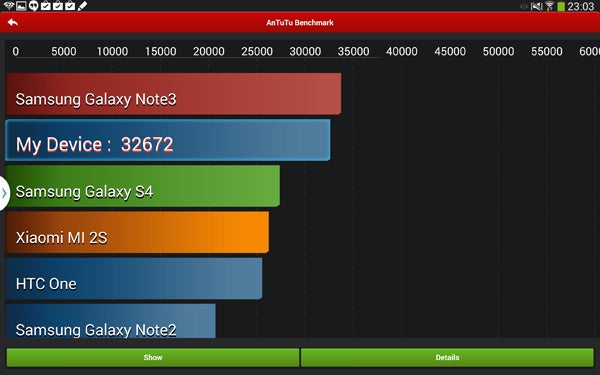 It’s a very interesting chip that employs four 1.9GHz Cortex-A15 cores and four lower-power Cortex-A7 cores, used when full power is overkill. The Samsung Galaxy Note 10.1 2014 also has 3GB of RAM, an extra gigabyte over most other top-end Android devices (which makes the performance glitches all the more unfathomable). Benchmarks show that the tablet has roughly the same power on tap as a Tegra 4 or Snapdragon 800 tablet, though.