As well as plenty of features, the Samsung Galaxy Note 10.1 2014 is generously equipped with apps. It’s not just the usual Google stuff, either.

S Note is a Note-series staple, an advanced note-taking app that lets you add audio, images, charts and even maps to your notes. It’s the first-party app that’s most well-optimised for the S Pen stylus.

It’s not the best if you want art rather than note-taking, though. That honour belongs to SketchBook, an excellent art app that features support for the Samsung Galaxy Note 10.1 2014’s pressure sensitivity. It supports layers, loads of different virtual brush types and plenty of customisation for those brushes. It’s fab. 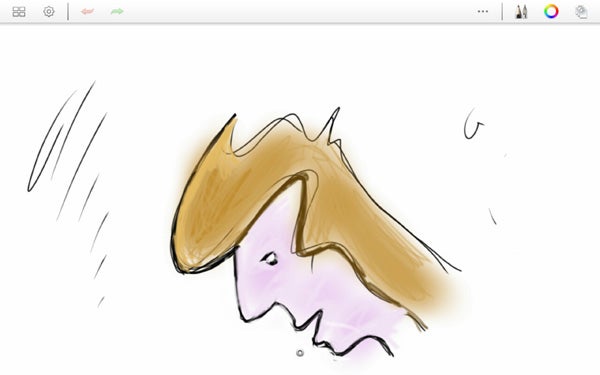 Action Memo is another slightly more practical app to make use of the stylus. It’s another note-taking app, but a simpler one that uses hand-writing recognition to make sense of your scribbes. So you can, for example, write down a phone number or place then add it as a Calendar event.

There are plenty of other stylus optimisations too. Like the Galaxy Note 3, the Samsung Galaxy Note 10.1 2014 uses the Air Command menu to give the stylus even better control. It pops up when you press the S Pen button while it’s hovering over a home screen, and brings up a circle of shortcuts to stylus-friendly apps.

The best thing for non-arty uses of the stylus, though, is that the hand-writing recognition can be used whenever a keyboard would normally pop-up. It’s pretty accurate as long as your handwriting isn’t terrible.

The stylus is one of the Samsung Galaxy Note 10.1 2014’s best bits, but there are bundled apps that aren’t stylus-focused too. Knox is all about business. It’s probably the best security solution available on Android, letting devices integrate with high-security work networks. It’s not for the average user, but Samsung deserves some kudos for putting the effort in here.

WatchOn is an app that lets you use the tablet as a TV guide, and even a universal remote using the integrated IR transmitter. It’s a bit of a pain to setup, but is worth using if the Note 10.1 2014 is going to more-or-less live in your lounge. The IR transmitter is one of the positive results of Samsung’s ‘everything but the kitchen sink’ approach to features.

The Samsung Galaxy Note 10.1 2014 also has its own video player – traditionally something Samsung has done very well. However, these days the Samsung video player is quite a lot like Google’s own, in that it pushes Samsung’s online TV and Movie store rather than just letting you play your own files. Codec support remains well above average, though. It supports DivX, Xvid, MKV, but not AC3. Those looking to play somewhat-suspect libraries of downloaded movies will still need to use a third-party video player app. 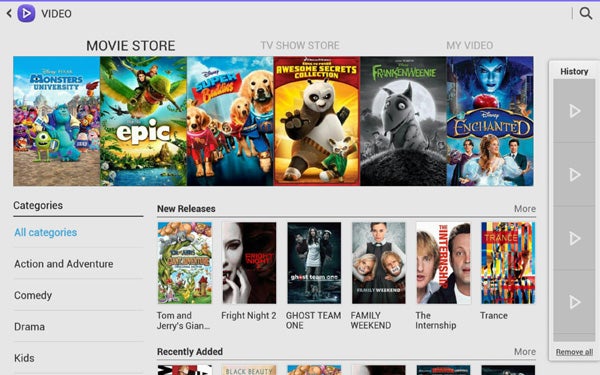 Samsung’s obsession with offering non-Google alternatives whenever possible continues with the Samsung Galaxy Note 10.1 2014’s office suite. Google now offers its own Quickoffice, which comes pre-installed with Android 4.4, but the tablet features Polaris Office 5 instead.