The Samsung Galaxy Note 10.1 2014 is the new version of the 10.1-inch tablet Samsung launched in 2012. Its key selling point remains the same – a digitiser stylus pen that’s fully pressure sensitive.

At £450 you do pay a little for this extra functionality, but this is a powerful, flexible tablet that’s worth considering if a tablet that doubles as a drawing pad appeals. 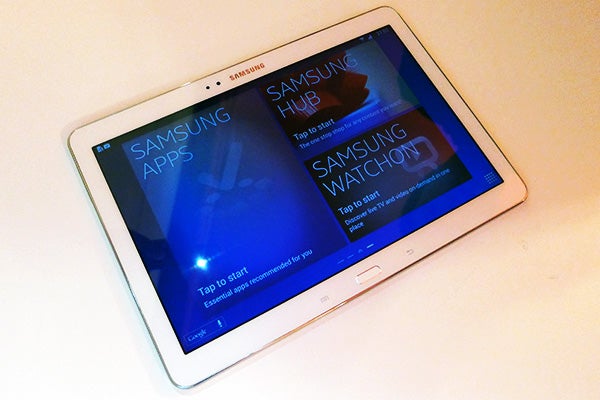 The Galaxy Note 10.1 2014 is a ‘full-size’ tablet just like the previous edition. There are two main changes to the bodywork – one is great, the other pretty questionable.

Starting with the good, Samsung has reduced the screen bezel, making the 2014 edition significantly smaller than the last one. It’s 243mm wide, down from 262mm last year. That’s a full centimetre cut off each side.

Making the tablet less wide makes the Samsung Galaxy Note 10.1 2014 easier to handle. There’s still easily enough space to each side of the screen to rest a thumb on, and the squarer shape feels much better in the hand. This is still a widescreen tablet,  but its actual shape is a little closer to the 4:3 aspect iPad Air. It’s an improvement. 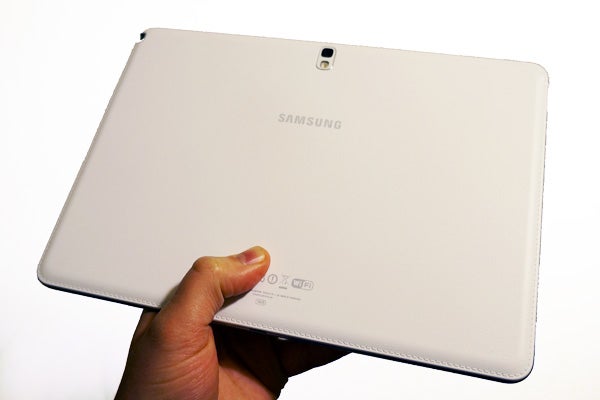 What we’re a little less keen on is the style Samsung has adopted for its newest high-end Galaxy-series devices. Where before they were finished with glossy, smooth plastic, the Samsung Galaxy Note 10.1 2014 has a faux-leather effect on its rear, complete with fake stitching. It is plastic. All plastic.

The feel on your fingers is better than the old glossy plastic, and it offers a little more grip. However, it is quite naff. It’s a real case of personal preference, but a straw poll of the TrustedReviews team discovered no fans of the new style. 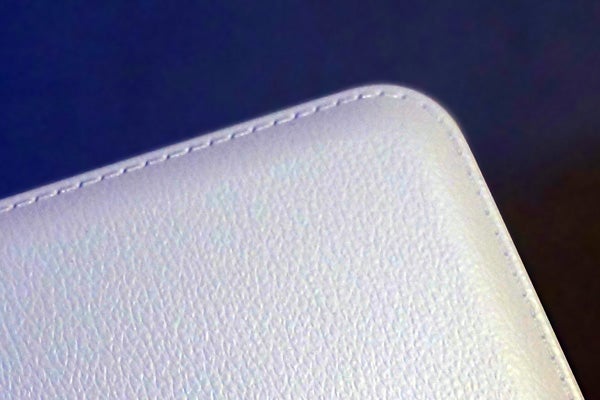 Like the Note 3, the Samsung Galaxy Note 10.1 2014 has ridged silver sides that look a bit like metal, but are – you guessed it – plastic. The Note 10.1’s build quality is solid, and the tablet feels much stronger than the last model, but the change of design direction lacks class.

At the launch of the Lumia 925 phone, Nokia stressed that its aim was to make something where if a material looked like metal, plastic, whatever – it would be made of that substance. It’s an admirable design doctrine. Samsung takes the opposite approach. Even the box features a wood-style texture. Suffice to say, it is not wood (much as paper/cardboard may be made from trees). 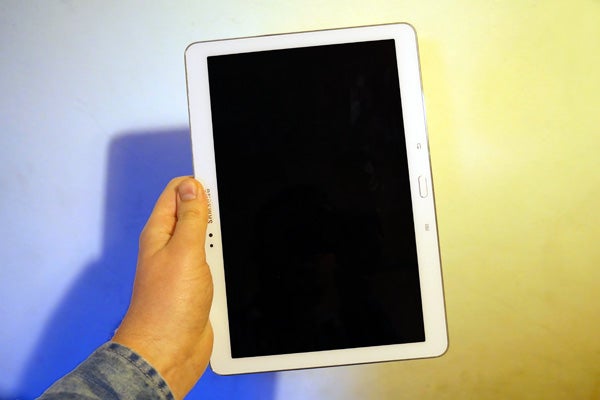 Down as we are on the Samsung Galaxy Note 10.1 2014’s finishing elements, they’re the sort of things you’ll get used to quickly. In more practical terms, the design is solid. At 540g it’s light for a 10.1-inch tablet, and it’s thin too at 7.9mm thick.

It’s on the cusp of being a tablet light enough to use one-handed, but we still think this is primarily a two-handed tablet. Of course, the orientation of the logo and soft keys implies this anyway.

Like just about every Galaxy phone, the Samsung Galaxy Note 10.1 2014 has a clicky central Home button and a pair of touch sensitive ‘back’ and ‘menu’ buttons. These were missing from the 2013 Note 10.1. They’re real practicality wins for the tablet, and like a Galaxy S4‘s touch sensitive keys, the back and menu buttons light up. They’re handy, if a little little unusual in a tablet. 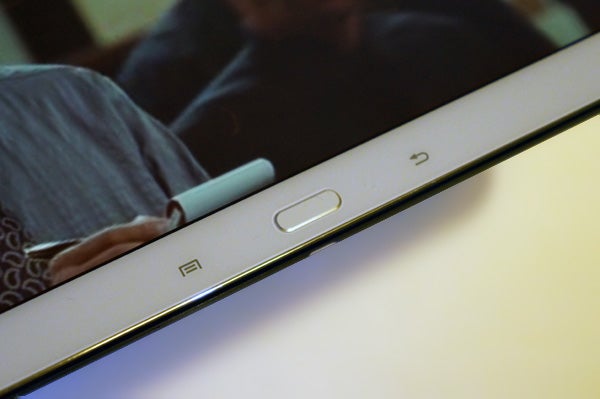 Like the 2013 Note 10.1, the 2014 Edition is not a beauty. However, despite all the criticisms we’ve made, it’s still a significant improvement over last year’s model – in both looks, build and usability.