What is the Samsung Galaxy Gear?

With an inbuilt camera and the ability to
make and receive calls direct from your wrist, the Samsung Galaxy Gear
is attempting to satisfy many needs, but is this enough to justify the
hefty £300 price tag? 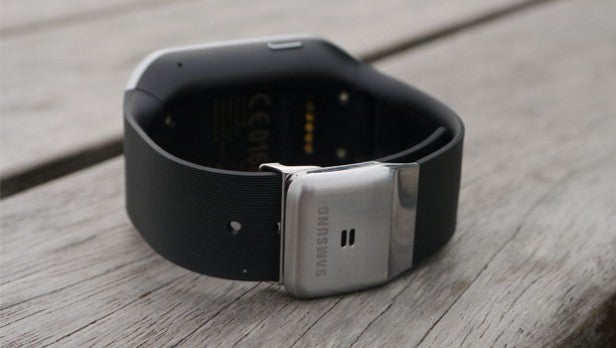 With the Samsung Galaxy Gear, Samsung’s design team has managed what it failed with both the Samsung Galaxy S4 and Galaxy Note 3
– a device that looks both appealing and high-end. With a stainless
steel face and buckle, the Gear’s premium design looks and feels the
part, but, at more than twice the price of its closest rival, it had to
really.

The textured plastic strap can be easily adjusted and the
buckle is secure and at no danger of coming loose when fastened. The
watch looks bulky when compared with a standard timepiece, but when on
your wrist it feels light and comfortable. At just 73.8g in weight it is
not particularly heavy and causes no discomfort after a day’s use.
What’s more, with the body of the watch just 11.1mm thick, it is barely
any chunkier than your phone.

The stainless steel on the Gear
give it a sturdy look. Unfortunately within a week of collecting it, the
buckle is covered with scuffs and scratches that ruin the overall
finish. What’s more concerning is that the damage has been caused by the
buckle rubbing on a desk. We expect more durability from a £300 device.

Scuffing
issues aside, the Samsung Galaxy Gear’s has quite a restrained design. A
single sleep/power button on the smartwatch’s right side makes it look
sophisticated and, well, watch-like. With a pair of noise cancelling
microphones and a single speaker built elegantly into the watch’s
buckle, the Gear’s only major design blemish is its strap mounted
camera. It looks like an awkward bulge and does detract from the slim, sleek appearance somewhat.

In a move
that continues Samsung’s push into more fashionable designs it has
launched a range of Galaxy Gear colours. The Samsung Galaxy Gear is
available in Black, Mocha Grey, Wild Orange, Rose Gold, Lime Green and the tastily named Oatmeal Beige. 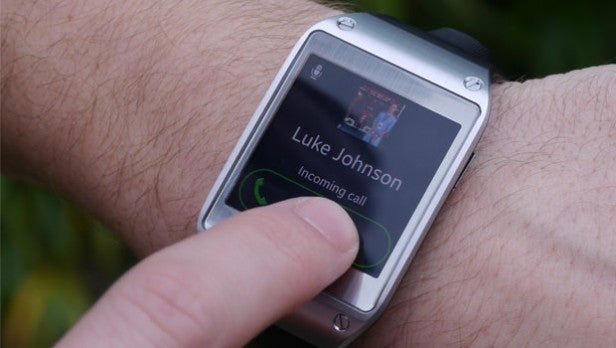 The
Samsung Galaxy Gear has come about due to the rapid growth of
smartphone screen sizes and so, as you would expect, it features a
relatively compact display. The Samsung Galaxy Gear’s 1.63-inch screen
actually feels quite refreshing, doing its job without overpowering.
Although it features just a 320 x 320 pixel resolution, this is more
than enough to give the small  Super AMOLED panel detailed and sharp
visuals. The 275 PPI (pixels per inch) is actually similar to full-HD 7-inch tablets.

Although
small the Samsung Galaxy Gear supports all of the touch commands you
would expect from the smartphone it is connected to. The swipe-based
interface is swift and easy to navigate and two-finger pinch to zoom can
be used within the photo gallery. Being able to analyse pictures in
closer detail direct from the watch further highlights the potential of
the smartwatch as a standalone device is a handy addition.

With
Samsung’s phones and tablets renowned for their impressive displays, the
Samsung Galaxy Gear’s screen has continued a trend, with good viewing
angles, in particular, proving useful on the wearable device.

Next
Features, Performance and Apps Review