The Samsung Galaxy Gear is powered by an 800MHz single-core processor and this is more than ample to handle the tasks required of it, for the most part. Partnered with 512MB of RAM, the watch runs smoothly, although load times for some features and applications (such as contacts and call logs) are lengthier than we would have liked.

Unlike the Sony SmartWatch 2, the Samsung Galaxy Gear is limited to being compatible only with Samsung’s own branded phones. Further restricting the it is that, at the time of writing, it only works with the Samsung Galaxy Note 3. Samsung has confirmed that it will work with the 2014 Samsung Galaxy Tab 10.1 when it hits the UK, while compatibility with the Samsung Galaxy S4 has been promised for later this month. For now, however, it’s a party of one. This renders the Gear essentially useless for anyone but a Note 3 owner. 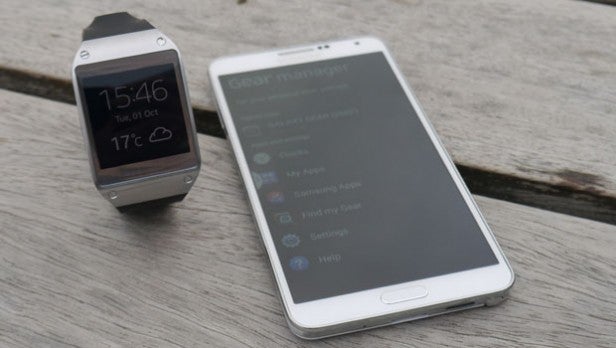 Disappointingly, and somewhat fatally, a selection of the Samsung Galaxy Gear’s key features are not as fluid or effortless as they should be.

Although you can receive email and Twitter alerts direct to your wrist, you can’t read the full messages on the Galaxy Gear. Instead the watch offers you the option to open the message on the parent device using Smart Relay. While it is useful to know when emails and social alerts are inbound, the lack of further access from the Gear renders the watch close to redundant. You can, however, read text messages on the Gear.

Another disappointing Samsung Galaxy Gear feature is the incorporated S Voice command options. They supposedly let you make calls and send texts simply by speaking to the watch, but in practice the service is glitchy and struggles to understand what is being asked of it. Annoyingly, the most common reaction is ‘We couldn’t understand…”. It’s far from the time saving option it is supposed to be as attempting to use S Voice often takes longer than simply performing the task manually.

Making and receiving calls direct from the Galaxy Gear is a good addition and audio quality is pretty impressive. The touch screen ensures making and answering calls is seamless and, in terms of performance, the Gear’s calling options work well. What is less enticing, though, is how much of a berk you look making calls, talking to your wrist like a 1980’s TV spy. During testing we felt too embarrassed to answer calls on the watch in busy areas on more than one occasion. 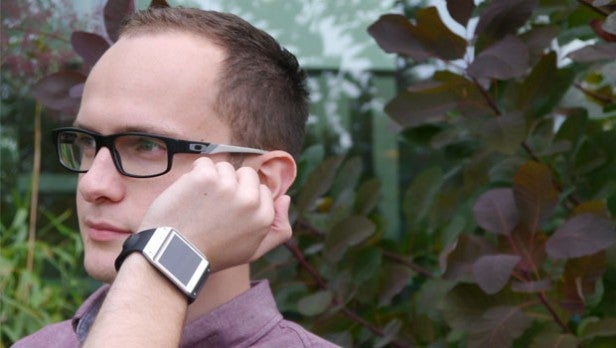 One area where the Samsung Galaxy Gear does shine, is a as a fitness tracker, with the integrated accelerometer and gyro-sensor turning the watch into your own pedometer. Communicating with the parent device and the integrated Samsung S Health app, the watch lets you track your daily step counts and set personal targets and conduct pre-set training sessions. Although a suitable all-in-one replacement to the likes of the Nike FuelBand, this is not a big enough redeeming quality to overshadow all of the Gear’s negative points.

On overall performance, the Samsung Galaxy Gear shows faint glimmers of brilliance but comes up short on far too many occasions. Getting email and Twitter alerts would be far more useful if you could actually read the darn things, and while you can read text messages, we would like to see the option to reply direct from your wrist on future iterations. 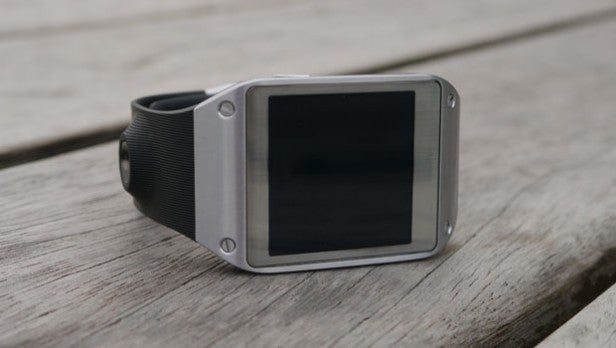 At the time of writing, the collection of available Samsung Galaxy Gear apps makes the Windows Phone Marketplace look like it’s bursting at the seams. Less than 100 Galaxy Gear apps available and, sadly, this isn’t a case of quality over quantity. Many of the applications are pointless and bring little to the party, such as dreadful ‘mini games’ like spin the bottle and roll the dice.

One of the few gems on the Galaxy Gear app store is Evernote, with shopping lists and notes able to be accessed directly from the watch. But solitary useful apps like this are the exception rather than the rule and do little justify the high price tag. Fundamentally, the Galaxy Gear doesn’t do a great deal of anything.