What is the Russell Hobbs Glass Line?

The Russell Hobbs Glass Line is a mid-priced, glass-fronted toaster with one long slot, so it can toast two slices at a time. The glass looks nice, but sadly the toaster’s performance is disappointing, with uneven browning and clunky controls.

It’s very evident which way round this toaster is designed to go. The controls are all on one of the long sides, plus this side is glass-fronted.

The rear wall isn’t transparent, unlike pricier glass toasters like the Morphy Richards Redefine Glass Toaster, so you can’t place it on an island and see all the way through it. And the design is a little spoiled by having a visible metal cage to grip the toast.

But the design is great for maintenance and cleaning. The inner glass slides out granting access to its single crumb tray. I was also pleasantly surprised to find the glass doesn’t get too fingerprinty, which is a regular issue on toasters with a similar design. 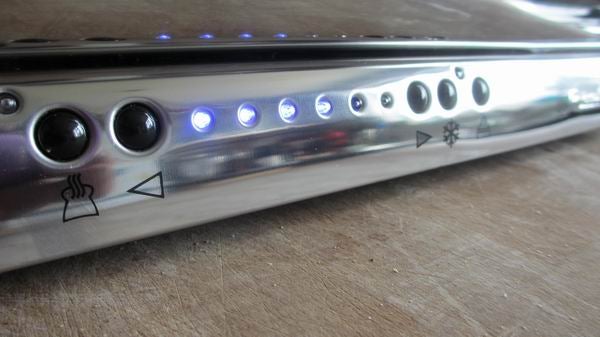 There are buttons across the bottom to reheat, defrost and cancel, plus left/right buttons to select from six browning levels. A series of six LEDs count down the toasting time.

Cable lengths are a bugbear of mine and this one is not good. It’s 65cm but that’s measured from the back-right. From the back-left you get just 45cm. There’s cable management underneath to store any excess. 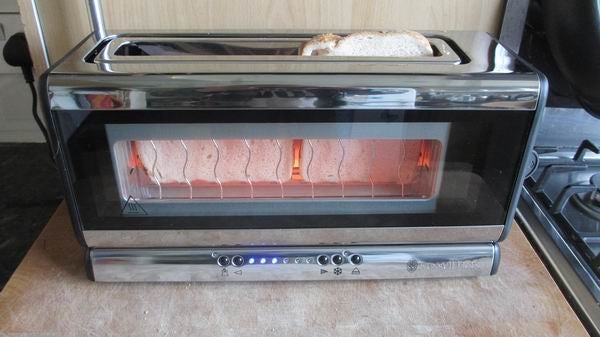 Russell Hobbs Glass Line – What’s it like to use?

I toasted two slices of white bread in its long single slot. It won’t quite fit two slices horizontally so I had to put one vertically, but the top was blatantly sticking up and unlikely to brown.

Getting started was annoying as it took several pushes of the lever to get the toast to stay down. I had this problem repeatedly: the lever was clunky to use and this lends the whole machine a cheap feel. 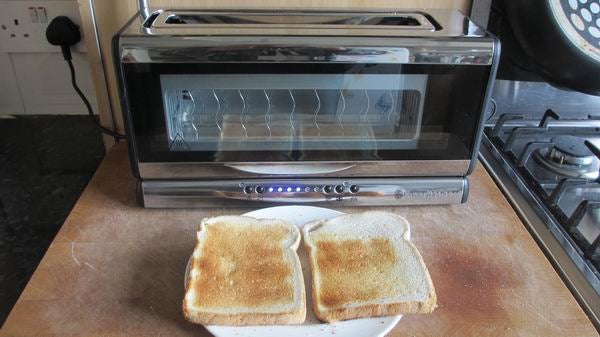 Using browning level 6, which took a fairly fast 1 minute and 50 seconds, the results were disapointing. There was a 4cm gap at the top of the vertical slice and 2cm on the right-hand side that wasn’t browned. The other slice was not so bad, so I could see myself using this as a one-slice toaster.

When I tried crumpets performance was again sub-standard. Browning was fairly even but by the time the top of the crumpet was toasted enough, the underside was overdone. 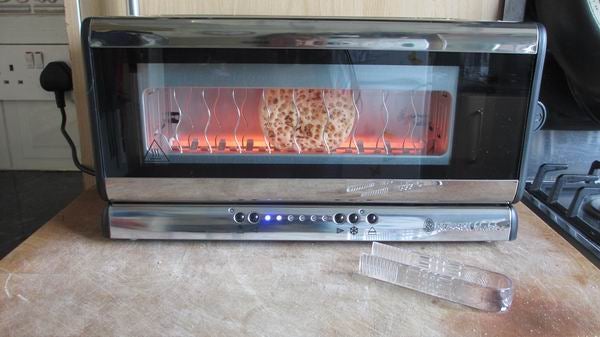 The Russell Hobbs’ lever only lifts your toastables by an extra 1.5cm, so it’s not great for grabbing crumpets. Perhaps for this reason, the toaster comes with a small pair of clear plastic tongs. The outside of the toaster gets fairly hot, but not so much that it will burn you. 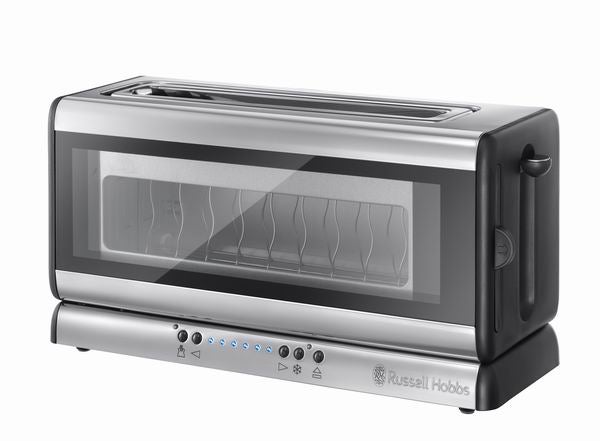 Should I buy the Russell Hobbs Glass Line?

No. Its performance is disappointing. There are better toasters and better glass toasters out there. The best two-slot (two slice) toaster we’ve tested is the KitchenAid Artisan, but it’s very pricey. A good in-between option is the Sage A Bit More 2 Slice. And if you’re open to the idea of a four-slot toaster then the Dualit 4 Slot Lite or the Hotpoint TT 44E UP0 are my favourites. If you love the idea of a glass toaster, the Morphy Richards Redefine Glass Toaster 228000 is pricier but better.

The glass front gives you a good view… of the Russell Hobbs’ disappointing performance.