What is the Morphy Richards Redefine Glass Toaster?

The Morphy Richards Redefine Glass Toaster is an unusual but stunning-looking toaster that’s made of glass – clear glass. This means you can watch your toast as it browns.

The toaster has a single slot that’s long enough to hold two slices side by side. It also includes a tonne of flash features. It’s perhaps the only toaster on the market to come with bragging rights. 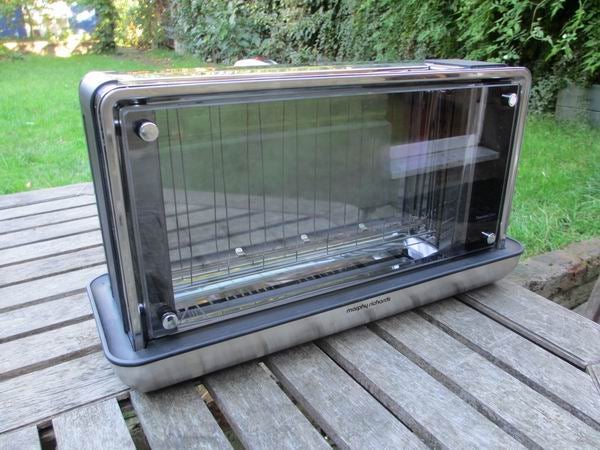 Most immediately noticeable about the Morphy Richards’ design is its glass walls, which look simply stunning. It’s difficult to take a photo that does the unit justice. You can literally see through the toaster, so it would be ideal placed on an island kitchen unit.

The toaster is made up of four layers of glass. The outer two panels provide an insulating layer, while the inner have a thermoglass coating that generates heat: the inner glass sheets are the elements.

The downside of four layers of glass is that the appliance weighs a tonne – although this isn’t really a problem since toasters rarely get moved around. 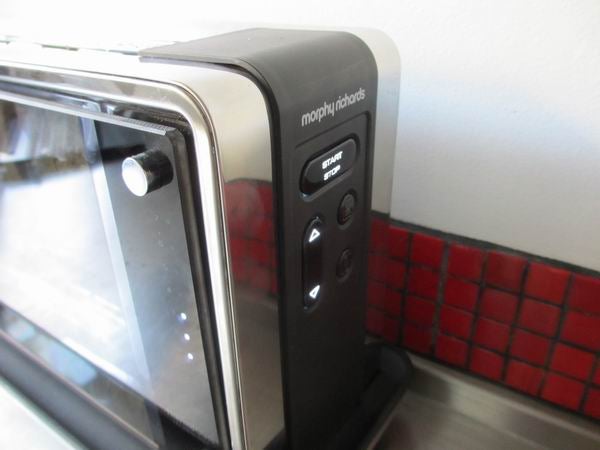 There’s no cable tidy beneath the unit, but this isn’t a huge concern since the cable is a little short at 65cm.

The toaster’s controls are on the left-hand end. With up and down buttons you select your desired browning level from 1-7, which is displayed on the front. Plus there’s a start/stop button for using the toaster’s motorised lift, and controls for reheating toast and for defrosting/toasting bread straight from frozen. The buttons are responsive but a little difficult to see, in keeping with the minimalist design.

The single long slot measuring 28 x 15 x 2.5cmmeans the Morphy Richards handles only two slices of toast at a time. I found that it was possible to fit in a 3cm doorstep though, by sliding out the adjustable wire cages that hold in the bread tightly. 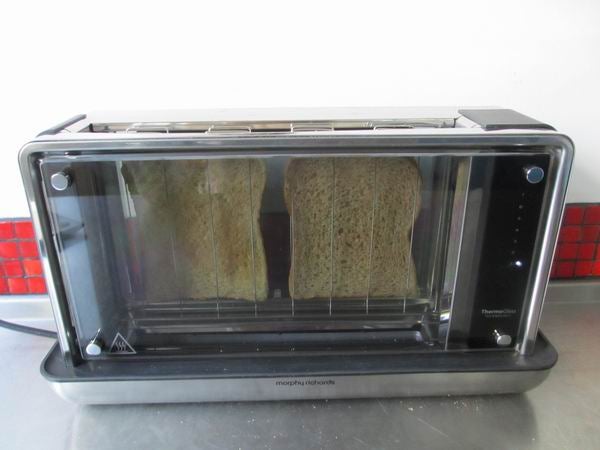 Morphy Richards Redefine Glass Toaster – What’s it like to use?

In short: impressive. It’s great fun having a see-through toaster, watching your bread as it browns. The motorised lift, too, is brilliantly flashy. Pop in your bread, select the browning level and then hit “go” – the toast slides down smoothly all by itself and then toasts before your eyes; the browning indicator numbers give you an idea of progress.

When the toast is done, it sounds twice and then rises automatically… like a toaster from the future. It’s lifted to a good height, so reaching smaller items such as muffins and crumpets isn’t a problem. 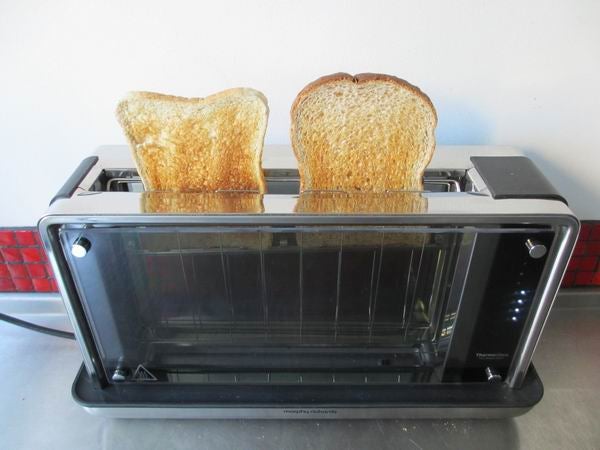 The toast is superb. It’s evenly cooked, as you’d hope for with such an expensive toaster. Still, it goes to show that the Morphy Richards’ design touches aren’t only gimmicks. Just as long as you don’t want to squeeze in wide stuff like bagels and really thick doorsteps.

The glass finish is prone to picking up fingerprints, though, as is the polished steel top. The glass finish also reflects light – so if you have bright lights on in the kitchen and a dark background it will seem a bit less transparent.

Interestingly, the toaster is supplied with a special scraper to clean crumbs from the inside of the glass, to help keep your view clear. It would be a real shame for the glass to get filthy. 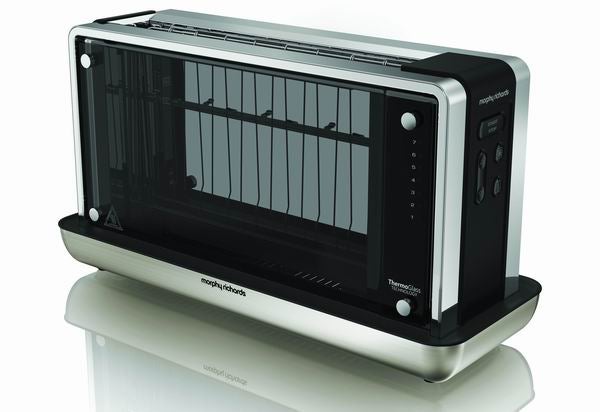 Should I buy the Morphy Richards Redefine Glass Toaster?

Maybe. As far as toasting it concerned, the results are on a par with the excellent Dualit Brushed Architect Four-Slice Toaster. But of course, the Morphy Richards costs twice as much and can handle only two slices of toast, not the four of the Dualit.

However, you can’t put a price on the flash design flourishes it offers – and if you love beautifully engineered gadgetry then this toaster will be right up your street. Or consider the minimalist Graef TO100.

If you’re after a bargain alternative then look at the Dualit Brushed Architect Four-Slice Toaster or the Hotpoint TT44EAX0: both toast four slices for half the price.

This beautifully engineered glass toaster does a brilliant job, but it’s costly for a two-slice toaster.