What is the KitchenAid Artisan Toaster?

The KitchenAid Artisan Toaster is a striking-looking two-slot toaster with a bold, curvaceous design that’s available in a range of bright colours. It’s also very expensive.

Before testing, I feared this toaster would be style over substance, but in fact you get both. Your money buys solid build quality and impressive performance as well as looks. It’s hard to justify spending this much on a toaster… but it’s tempting nonetheless. 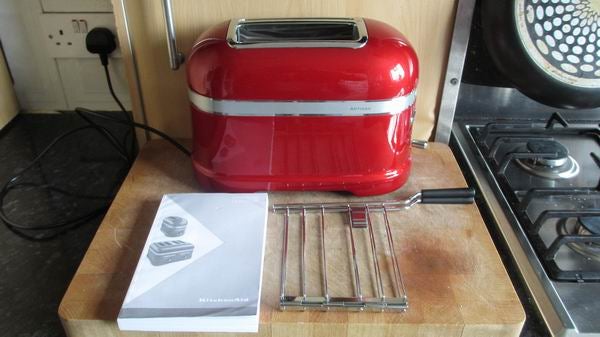 It’s solidly built, very heavy and takes up a lot of space for a two-slot toaster.

Controls are on one end, so it’s ideally placed with those facing you, but you could turn it sideways on. The power cable is an outstanding 145cm long from the back and there’s cable management underneath to store any excess.

There’s a slider to select browning level, from 1 to 7 and anywhere in between, then four buttons: bagel, defrost, sandwich and toast/cancel. There is no lever to start or finish toasting – you press this button and the bread is mechanically lowered or lifted.

It comes with a sandwich cage and an instruction manual bigger than the one you’d get with most cars. Thankfully it’s in 17 languages, so there are only 16 pages to digest in English. 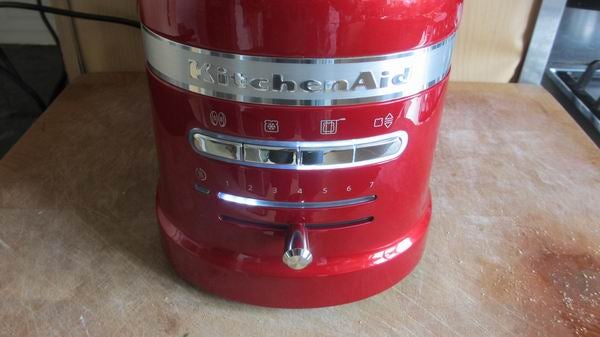 It’s not just the KitchenAid’s looks that will turn heads, the features will wow too. For example, put bread in the slots and the toaster automatically senses them, lowers them and starts toasting. This worked just fine for me, but if your toastables are so light that this doesn’t trigger you can hit the toast/cancel button.

When your toast is done, the KitchenAid lifts it up in the slot… but if it’s not removed within 45 seconds it automatically lowers and goes on a keep warm cycle for 3 minutes.

So far, so many bragging rights, but what about the results? I toasted one slice of white bread vertically and one horizontally to test evenness. It beeps at the start and finish, sounds like an elevator reaching its desired floor. Which seems fitting, as the bread is lifted up and down.

The toast emerged after just 1 minute 40 seconds, which is very quick, and browning was perfect and impressively even, the best on test. The top of the vertical slice had some stripes on it, but it was still browned perfectly, all the way to the top.

Its 3cm side slots (narrowing to 1cm when clamping toast) held crumpets well. Again toasting was even and the keep-warm function was much appreciated. With no lever, there’s no high lift, though, which means you can only just reach your hot crumpet. And inspecting toast means pressing cancel then waiting a few seconds for the motorised lift. This is an automated toaster that’s designed for the time-poor but it’s not for the impatient. 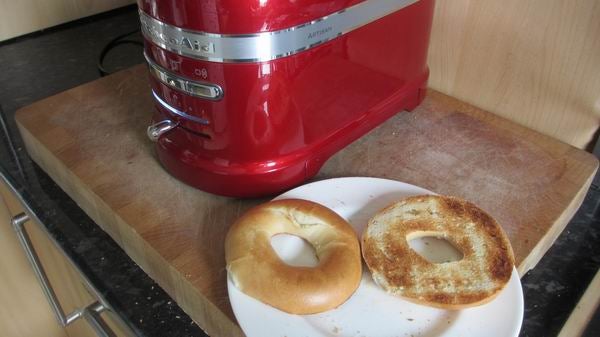 Bagels were cooked nicely on one side, with slightly uneven browning but better than most. And sandwiches were delicious and easy to handle in the sandwich cage. At 1 minute 40 seconds bread seemed a little underdone and browning was more towards the bottom. But it tasted great: melt-in-the-mouth cheese, lots of soft crumb but crispy on the outside. Next time I’d turn up the browning slightly.

The sides of the toaster get warm but certainly not hot enough to burn. And its crumb tray is accessed from the right-hand side and is sturdy but shallow, it won’t hold much. 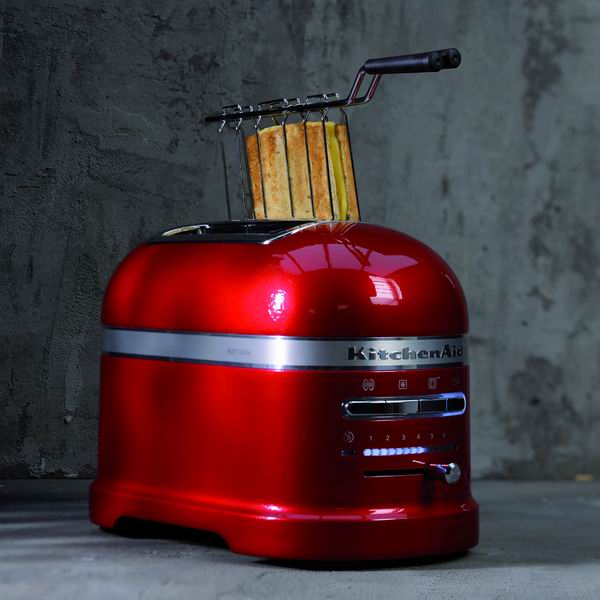 Should I buy the KitchenAid Artisan Toaster?

If money’s no object then buy this. It’s beautiful, performance is impressive and the motorised lift and keep-warm function make it good for the time-poor.

But it costs a lot and only has two slots. There is a four-slot Artisan toaster but it’s less beautiful and even pricier. For a great toaster at half the price, consider the Dualit 4 Slot Lite or the Hotpoint TT 44E UP0. If you’re on a budget, consider the Morphy Richards Rose Gold Toaster. Keen on a two-slice toaster? Check out the Sage A Bit More 2 Slice.

Stunning looking, superb performance, but very pricey – one for the wedding list?