What is the Dualit 4 Slot Lite?

It also impresses through its performance, with very even browning and intelligent controls which get more consistent results by reducing toasting time if the Dualit is already hot. 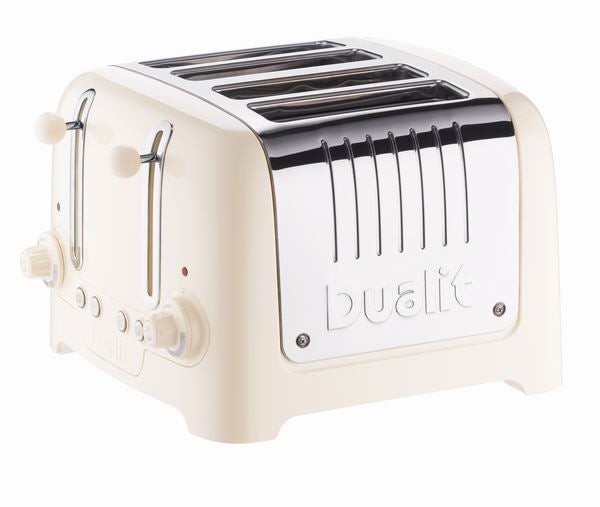 I tested the Dualit in canvas white, but it’s available in five other colours: black gloss, gloss cream, metallic red, gloss red and metallic red. At the time of testing, John Lewis had an exclusive deal, selling it with a free warming rack. As an optional extra accessory you can buy sandwich cages, and at around £11 for two they’re surprisingly affordable.

The high-gloss finish and curvaceous design feels timeless. It would look equally good in a contemporary or retro-styled kitchen.

Improvements on older toaster designs include extra-wide (36mm) slots, Defrost and Bagel buttons, and a dial to control browning (from 1 to 8 and anywhere in between). The cancel button is in the middle of the browning dial. Plus Dualit’s ‘Peek & Pop’ function lets you check on progress without cancelling the toasting cycle.

Cable lengths are a bugbear of mine. This one is good, not great, at 90cm – but that’s measured from the front right. From the back you get 62-67cm. There’s cable management underneath to store any excess. 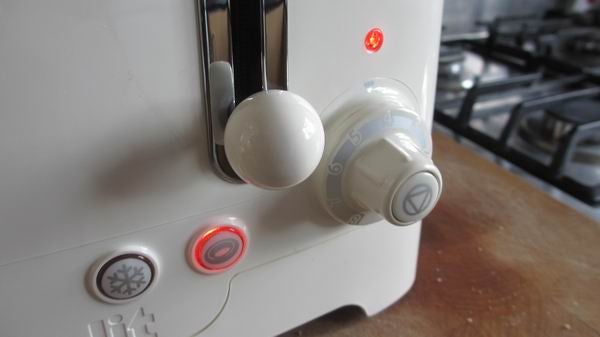 I toasted two slices of white bread vertically and two horizontally (these only just fitted in the slots) to test evenness. There are eight browning levels controlled by dials, with five clicks between each number, so you have lots of control over the level.

You push down the lever(s) to start toasting and then toast pops up automatically when done. The levers are attractive, with a bobble on the end that feels well made, not cheap and plasticky.

Both sides popped up after 2 minutes 15 seconds, and results were exceedingly even, whether toasted horizontally or vertically. There weren’t even many stripes. 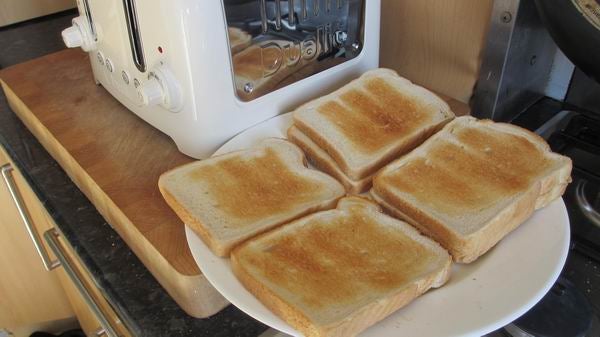 One of the Dualit’s most compelling features – with the fanciful and patented name of ‘Perfect Toast Technology’ – is built-in intelligence. Toasting time is based on the ambient temperature and the temperature of the toaster, so every slice is consistent. So the minute toast popped, I put in another two slices, again on a browning level of 4. Lo and behold, this time it only cooked for 1 minute 50 seconds and the results matched the previous batch perfectly. Very impressive.

Slots are an impressive 36mm wide and narrow to 15mm to hold the bread. Crumpets need more cooking than toast and I found a browning level of 6 was perfect. You can lift the Dualit’s lever at any time to take a peek at progress, without cancelling the browning cycle. After it’s popped, lifting the lever raises your toastable item by 1.5cm, which is just enough to grab a crumpet. 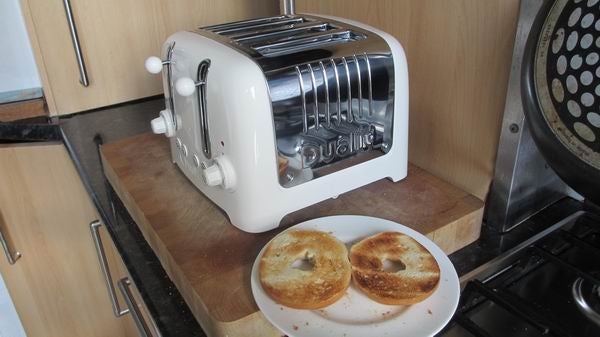 To toast a bagel, first begin toasting then press the Bagel button. A circle around the button lights up to reassure you that your toaster is following orders. Results were very even and a browning setting of 4 was about right. And it’s the middle elements in the pair of slots that warm up – so if you place a sliced bagel in there with the cut sides facing each other, it’s the cut sides that get toasted.

The toaster looks great and the coloured body doesn’t gather fingerprints. The area around the slots is polished chrome and does get a bit fingerprinty, but this is on the top and looks fine. A pair of crumb trays, joined together, pull out from the rear. 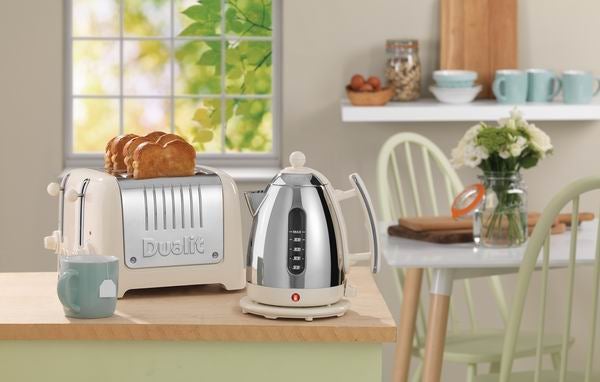 Should I buy the Dualit 4 Slot Lite?

It’s a bit pricey, but it performs brilliantly. Browning is even, slots are extra wide and built-in intelligence makes for consistent results by fine-tuning toasting times.

The other toaster worth considering at a similar price is the Hotpoint TT 44E UP0. If you’re on a budget, maybe consider the Morphy Richards Rose Gold Toaster. And if money’s no object then the KitchenAid Artisan Toaster is rather lovely.