The Hotpoint TT 44E UP0 is a four-slice toaster with digital controls and warming racks on the top. It has modes for toasting bagels and sandwiches.

Its intelligent controls are great, automatically reducing toasting time if the Hotpoint is already hot, for more consistent results. 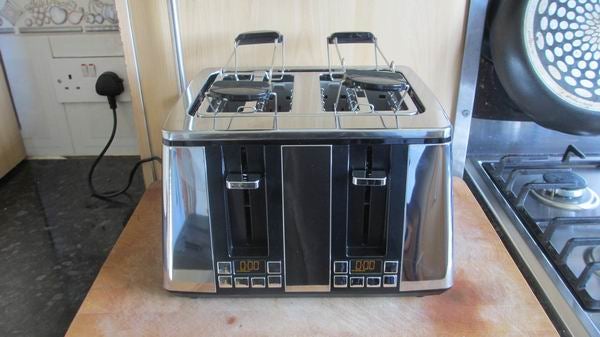 The Hotpoint is big but not ugly: its polished chrome body has clean lines. It’s a bit art deco. I didn’t like the flimsy warming racks, though – they fold up well for storage but look wonky on top of the toaster.

Controls are digital. One set for each pair of slots. Defrost, reheat, sandwich/bagel, and cancel buttons along with plus and minus buttons to select from eight levels of browning. LED displays on each side count down the remaining time as well as indicating the browning level and functions.

Cable length is good rather than great at 95cm, but that’s measured from the front right. From the back you get 60-70cm. There’s cable management underneath to store excess. 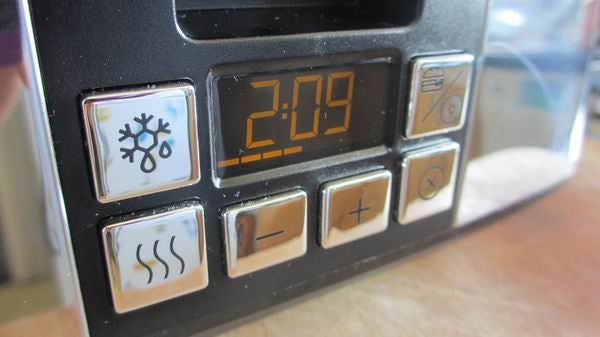 I toasted two slices of white bread vertically and two horizontally to test evenness. Select the browning level and then push down the lever(s) and the toaster starts. The default was to toast for 2 minutes 27 seconds. This turned out pleasantly even toast. The two slices that sat horizontally were evenly browned, just a bit stripy. The two vertical ones had just a 1cm strip at the top that wasn’t browned. Also the outside side of the very right-hand slice was a bit underdone. 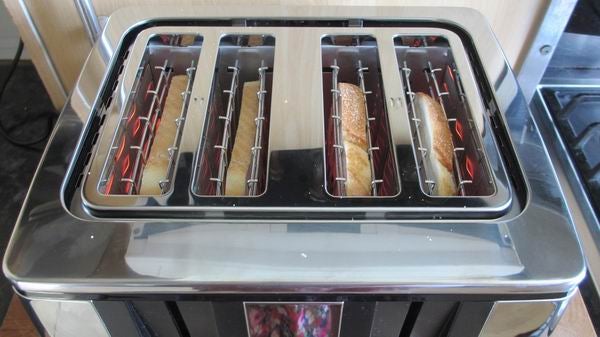 Most impressive, though, is that if you go to put on more toast straight away, the timer is automatically set for a bit less time, to account for the fact that the elements are already warm. This intelligence leads to much more consistent performance.

The slots are 3cm wide, which is halved when gripping the bread. It was wide enough for crumpets and more. Pull the lever up to lift your toastables by an extra 2.5cm, which is enough to grab smaller items. 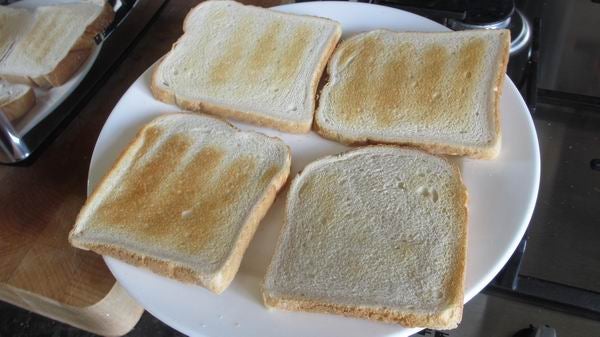 There’s a single button to set the Hotpoint to bagel or sandwich mode: press it once for bagel, a second time for sandwich and a third to return to regular toasting. Like the defrost and reheat buttons, you have to press this before you push the lever down to start the toasting. And again there’s a reassuring icon on the display, so you know you have it in the right mode.

The bagel mode, which toasts on one side only, worked well but was counter-intuitive because it toasts the outside of the two halves of cut bagel. To toast the insides you’d need to put the two halves back-to-back. The mode does the job, though, and is also handy if, like an Englishman in New York, you like your toast done on one side. 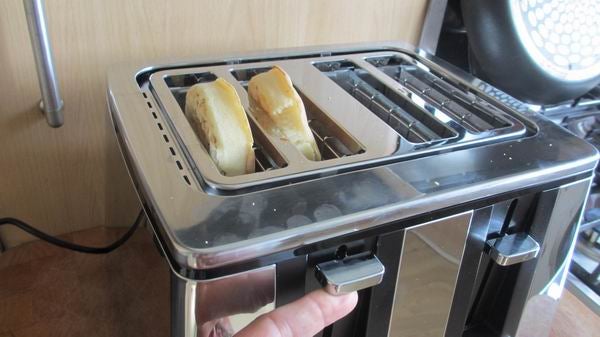 I wasn’t a fan of the warming racks. They’re big enough to fit four pastries but they’re flimsy and look wonky. But then I’m not a fan of warming racks anyway. I had to put the toaster on twice for croissants, flipping them over after the first cycle, and still the results weren’t a patch on using an oven. I like that the racks fold up, so they take up less space in the cupboard… but that’s where they should stay.

The sandwich mode was well judged, melting the filling without burning the bread. The 3cm slots are wide enough for the job, just as long as you don’t try to make a doorstop toastie.

Throughout the test, the outsides of the machine remained cool and safe to touch. The polished chrome finish is very susceptible to greasy fingerprints, though, so beware butter fingers. The two crumb trays are slim and accessed from the rear of the toaster. 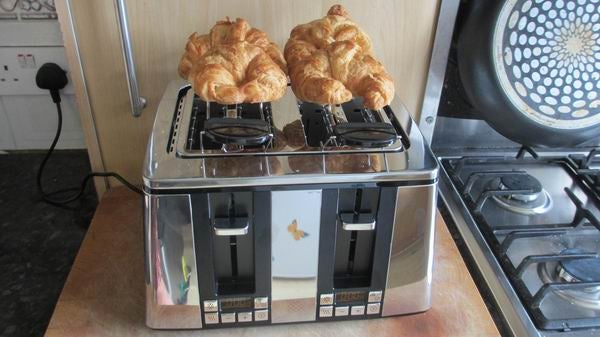 Should I buy the Hotpoint TT 44E UP0?

It’s quite chunky, but if you have the worktop space then the Hotpoint is a solid workhorse that turns out consistent results. It’s therefore good for families who want to churn out batch after batch of a morning.

The only toaster that trumps it at a similar price is the Dualit 4 Slot Lite. If you’re on a budget, maybe consider the Morphy Richards Rose Gold Toaster. And if money’s no object then the KitchenAid Artisan Toaster is rather lovely.

The Hotpoint’s intelligent controls turn out batch after batch of consistent toast, perfect for big families.