What is the Sage A Bit More 2 Slice?

The Sage A Bit More 2 Slice is a boxy two-slice toaster with a couple of cute fancy features. You can peek at progress, pop it back on to toast for a bit more time and it beeps when it’s done.

The results are very tasty and evenly cooked, but it doesn’t automatically adjust toasting time when the toaster is already hot – a feature offered by some other premium toasters.

The Sage has a boxy design in brushed stainless steel. The lines are clean and a bit industrial. It looks like it means business.

Browning controls are a slider, from 1-5 and anywhere in between. These apparently translate to 12 different levels of browning. The strip of lights above the give a visual indicator of how much time is left.

Above this are four buttons: A Bit More, Crumpet/Fruit Loaf that promises extra heat to the middle elements, Frozen, Cancel. There’s no button for reheating toast.

You can push the lever up at any time to inspect, without halting toasting, and there’s a high lift for reaching small stuff.

The power cable is an excellent 1m long from the back and there’s cable management underneath to store any excess.

There’s an audible alert when your toast is done. This can be set to high or low volume or muted. 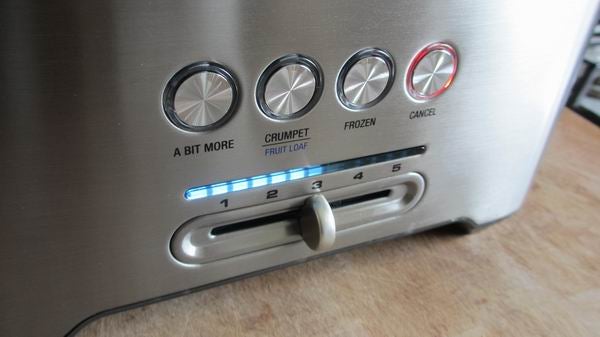 I toasted one slice of white bread vertically and one horizontally to test evenness, on a middling browning setting of 3.

The Quick Look feature is handy because you don’t need to cancel and reset the toaster and risk burning your toast by putting it on a second time. It doesn’t feel like a hi-tech feature, though – it’s more reminiscent of an old-school Dualit. 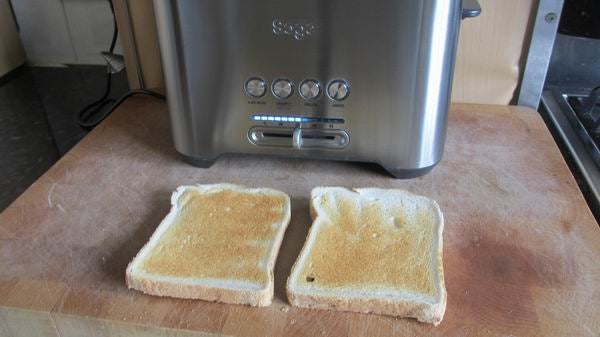 Toast took 2 minutes 40 seconds and was cooked perfectly, very even. The vertical slice was great too, with less than 1cm at the top only slightly underdone. Toast texture was perfect: crisp on the outside but not dried out

Slots are an impressive 4cm wide, narrowing to less than 2cm to grip toast. The Crumpet/Fruit Loaf button seems to be equivalent to everyone else’s bagel button. Has Sage done focus groups and decided that crumpets and fruit loaf are more popular? It heats just the middle elements.

Again crumpets were very well cooked, a sense of crispness on the outside but softness inside. Impressive. 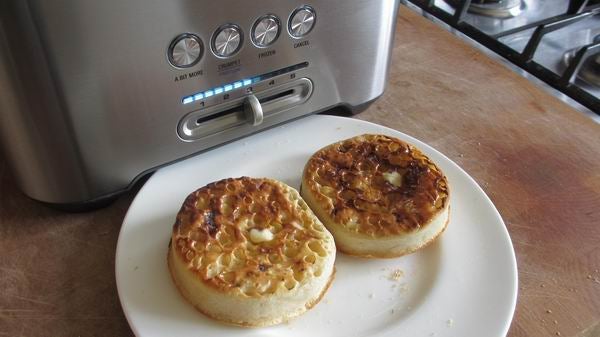 The Quick Look idea is good, because you don’t need to stop the toasting cycle. Conversely, if your toast is underdone then Sage’s signature A Bit More button does exactly what you’d wish for: popping it back on for a short time to finish the job.

The high lift isn’t great, though – it only brings your toastables 1.5cm higher. This is fine for grabbing small stuff, but not high enough to properly see how toasting is progressing when you do a Quick Look. 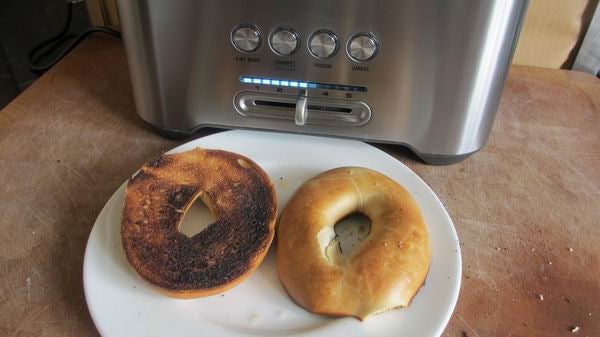 I tried a bagel using the Crumpet/Fruit Loaf button too, immediately after the crumpet. They were definitely cooked on one side only, but overdone. The Sage doesn’t take temperature into account and reduce cooking times for consistent results. Also because the toast isn’t ejected very high when done, it sits there beside the still-hot elements and continues to brown if you don’t remove it promptly.

The beep at the end of the toasting cycle is handy but it happens at the exact same time as the toast popping up, so the sound is masked. It would be better if it beeped a second earlier or later.

The brushed steel finish is pleasantly impervious to fingerprints and a good, wide crumb tray comes out of left-hand side. The outside walls remain very cool after toasting. 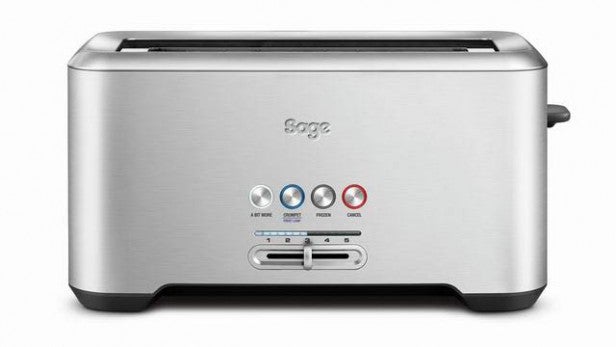 Should I buy the Sage A Bit More 2 Slice?

This is a decent toaster that boasts some clever features. But there are other toasters like the Dualit 4 Slot Lite and Hotpoint TT 44E UP0 with built-in intelligence that perform even better by reducing toasting time if the toaster is already hot.

The best two-slot toaster we’ve tested is the KitchenAid Artisan, but it’s very pricey. If you’re open to the idea of a four-slot toaster than the Dualit and Hotpoint are our favourites, or maybe the Morphy Richards Rose Gold Toaster if you’re on a budget.

The Sage has some clever features and makes very tasty toast.