What is the Razer Turret?

The Razer Turret is one of those gadgets that you never envisaged wanting – until you see it, that is.

It’s basically a keyboard with a fold-out mousepad, which lets you control a computer from the comfort of your sofa. It might sound simple, and it really is.

Yet the Razer Turret fills a hugely underserved niche: gamers who want to escape their desks and chairs. While £150 may appear an expensive price to pay, it’s a product for which some gamers will have been waiting for decades.

Fortunately, I think the Razer Turret is a great bit of kit, although there are a few downsides that need to be addressed.

Video: Hands-on with the Razer Turret

The Razer Turret is a product that hinges on comfort and ergonomics, so design is key.

The Turret is classic Razer design: black with green trimmings. The actual keyboard is a typical chiclet-key affair, but with two bonus Android buttons (home and back) for pairing with a smartphone or tablet. The button action is as decent as you’d expect from chiclet keys, and the spacing is mostly good; it’s about the same size as a MacBook Air keyboard. 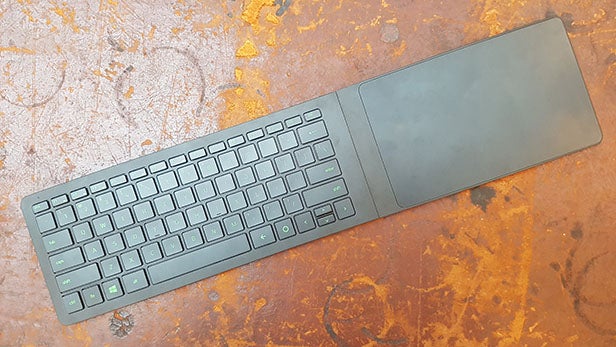 The mousemat folds out to the right of the keyboard – lefties need not apply. It’s fairly compact, similar in size to that of two-and-a-half drink coasters. But that’s sufficient space for the sweeping motions required by video games.

Better still, the mousemat is slightly magnetised, which means the bundled Razer Orochi mouse – which is also magnetised – won’t slide off the surface. I found this really useful when playing on the sofa, as the Turret tends to sit at a tilt. Using a normal mouse (the Logitech G900, for reference) proved frustrating, but the sticky Orochi stayed glued to the mat.

The underside of the Turret is coated in a grippy rubber to ensure that it doesn’t slip off your lap. The hinge that joins the keyboard and mousemat is fairly rigid; it didn’t flap or bend at all during play.

Also included in the box is a small 2.4GHz Bluetooth adapter. This can be plugged into the USB port of a laptop for instant connectivity. The Turret can also pair via a standard Bluetooth connection, which means you can sync it to your smartphone. 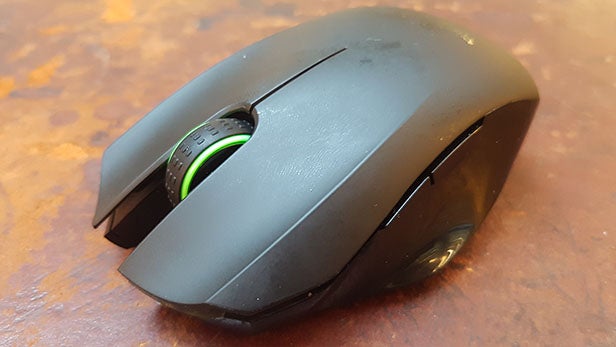 Perhaps the best thing about the Turret is its compact design: it’s small, thin and light, which is fantastic. However, that same compact design also has a few drawbacks.

For a start, the keyboard doesn’t feature any extra buttons. Most gaming keyboards come with additional keys that can be mapped to functions in-game – they’re often called “G” keys. But the Turret’s keyboard has none, which limits its use.

The same goes for the mouse: the Razer Orochi is a minimalist mobile mouse. As such, there are just seven programmable buttons. The Orochi is also notably small, by market standards. If you’re accustomed to wrangling with hefty mice – think the Roccat Nyth or the Logitech G900 – then switching to the Orochi will be like moving from a bazooka to a slingshot.

The coolest thing about the Razer Turret is its charging dock, which comes bundled for free. It enables you to charge both the keyboard and Orochi mouse at the same time, and it looks really nice. 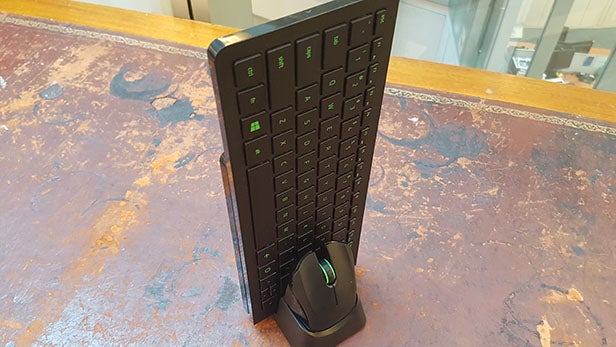 Razer claims that the Orochi mouse offers a 40-hour battery life based on continuous usage. The keyboard, meanwhile, is estimated to last four months on a single charge, although this will obviously vary according to your level of usage.

I used the Turret as I’d normally use a mouse and keyboard: multi-hour sessions with overnight charging. Neither the keyboard or mouse gave out on me. And for good measure, I did attempt three days without charging either device, to great success.

Just like all Razer products, the Turret is designed to work with the company’s custom-built Synapse software suite. It’s the same package across all Razer devices, so if you own one then you’ll already have it installed.

I’ve always been fond of Synapse; it’s versatile, offers plenty of functionality, looks good, and isn’t overly intrusive. It’s there when you need it, and it’s hidden when you don’t.

Synapse isn’t particularly useful with the Turret, but that’s mainly because neither the keyboard nor mouse have an abundance of features. After all, the keyboard has zero lighting, which usually makes up a big part of Razer’s keyboard proposition, and the mouse has a limited roster of buttons, which means you won’t have a use for the macro functions. 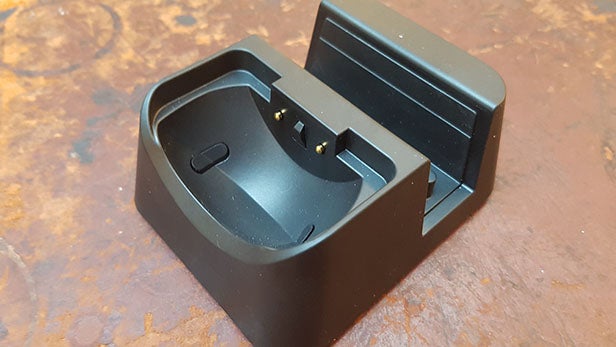 Still, you can use Synapse to do all the usual things you’d expect, such as changing the polling rate and DPI settings for the Orochi, or tracking your key presses using a heat map. Don’t forget that Synapse will also load settings based on the game you’re playing, so you don’t suffer the headache of quickly editing settings each time you start up a new title.

Other than its magnetised base, the mouse is a standard Razer Orochi. As such, you can read more about the device in my full Razer Orochi review. If, however, clicking that link is too much effort, then in short I gave the Orochi an 8/10 score, praising its portability, tracking and design, but was disappointed by its small size.

In terms of performance, the Orochi is a solid device. It comes equipped with Razer’s 4G sensor – a little old, but still good – and has a maximum DPI (read: sensitivity) of 3,500 (down from the normal 8,200). That’s not huge by 2016’s standards, but 3,500DPI should be plenty for most gamers using a Full HD monitor or lower.

Higher sensitivity is effectively useless for us mere mortals, because your cursor will be too difficult to control – unless you’re using a 4K monitor, maybe. 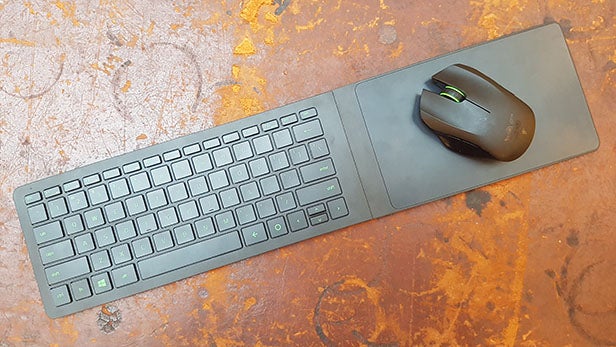 Perhaps the biggest problem is the drop-off in performance when using the Orochi in wireless mode, which you almost certainly will be. The response time plunges from 1ms to 8ms, and the polling rate – how often the mouse reports its location to the computer – slides from a maximum 1,000Hz to a lowly 125Hz.

This isn’t ideal, so if you have an important tournament coming up, don’t bring the Turret along with you. But if you’re just crashing out on the couch for a quick stint of Uncharted 4, you’ll be fine.

Both the mouse and keyboard maintained their connections well; I didn’t notice any cursor juttering, but a couple of my key presses didn’t register. That said, it happened only two or three times during several weeks of use, so don’t worry too much about this. 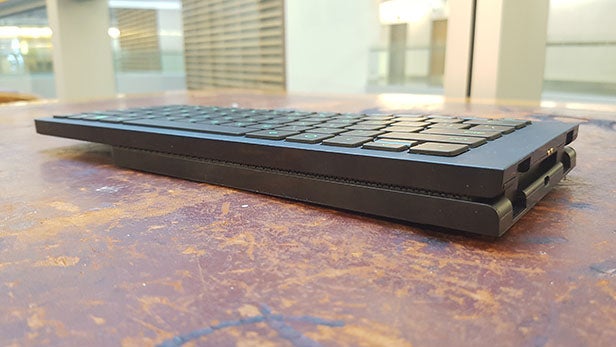 I want this to be very clear: you’re highly unlikely to experience significant performance issues with the Turret. Pro gamers won’t use it, since any latency is too much latency. But even in wireless mode, the Orochi is sufficiently nippy – don’t fear the milliseconds, folks.

What games work best with the Razer Turret?

With a keyboard and mouse, you can play pretty much anything. But in the way that racing games are better played with a steering wheel, certain game genres suit specific types of mice and keyboards.

With the Orochi, the biggest limitation is the low number of buttons. There are seven programmable keys, but you’ll only really be re-mapping two to four of these – depending on how much you value DPI switchers.

So if you’re keen to play hotkey-dependent games such as World of Warcraft, the Orochi isn’t ideal. By contrast, the Orochi’s simplicity and lightweight body makes it great for twitchy games – think MOBAs (League of Legends, Dota 2) or first-person shooters (CounterStrike, Call of Duty). 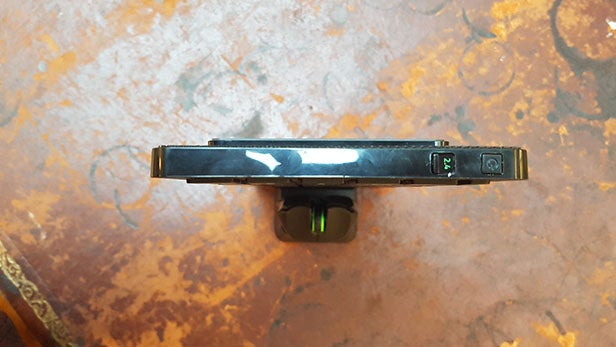 The keyboard is, of course, similarly minimalist. As previously mentioned, there are no remappable “G” keys. So when setting up keybinds, you’re limited to the standard QWERTY keyboard, plus the usual modifiers (Ctrl, Alt, Shift). For those reasons, again, the Turret isn’t ideal for hotkey-heavy games such as MMORPGs.

It’s also worth noting that the arrow buttons are a little small, particularly the up and down keys. This won’t matter for the majority of games, but I’m quite fond of Flash Flash Revolution – a browser-based dance mat clone – and here it definitely felt finicky trying to bust a move with the dinky keys.

Should I buy the Razer Turret?

There’s no denying that the Razer Turret is expensive at £150. But consider that for the money you’re getting a wireless mouse (worth £65 alone), a wireless keyboard, and a magnetised mousemat. Plus the fact that it serves a unique function, because there’s very little else like it on the market.

The biggest issues with the Turret are first, the mouse is small, and second, you’ll almost certainly be using a wireless mouse, which equals a slip in performance. But if you can look past these negatives (since you’re not trying to play to a professional standard), then the Turret functions just fine.

? Theobvious choice is the Roccat Sova ($149) – but it’s huge, wired, and doesn’t seem nearly as refined as the Turret. It also isn’t on sale yet (incoming Q3 2016, apparently). As such, I’ll have to wait for a review model before I can make a proper comparison.

Also an option is the Corsair Lapdog. It’s smaller than the Sova, but still much bigger – and far thicker – than the Razer Turret, so its size may actually put off many. In addition, its mousemat is non-magnetic; the slipping mouse will soon become frustrating. It’s available from OCUK for £109, making it cheaper than the Turret. But while it is a solution, I’m not convinced it’s the solution.

The Razer Turret isn’t perfect, but it works well – and, more importantly, it’s easily the best solution for couch-gamers I’ve seen to date.