What is the Roccat Nyth?

It’s a tricky business to buy high-end gaming mice, because most are designed to cater for a select demographic. Mouse X is great for MMO gamers, while Mouse Y suits those who tend towards shooters.

Then there’s the Roccat Nyth, a mouse that aims to be all things to all people. This highly customisable mouse is a pricey bit of kit at £90, but it’s built to be as versatile as they come.

For the unaware, Roccat is an increasingly popular peripheral manufacturer that, while not as well known as Razer or Steelseries, has plenty of solid products to its name.

The Roccat Nyth is one of its most recent entrants, arriving to the market in 2015. But in its effort to please all, does the Roccat Nyth tick any of the right boxes? 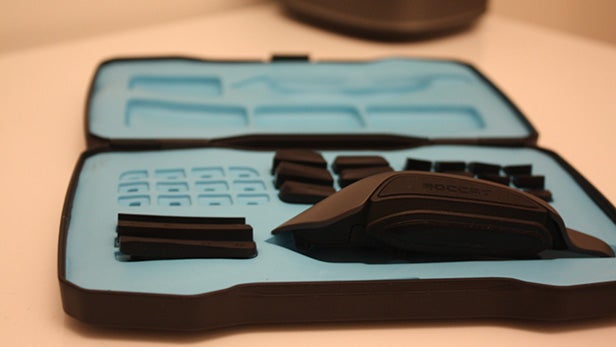 The Roccat Nyth is a difficult beast to accurately describe, because its design can vary wildly depending on how you choose to customise it.

There are some constants however, namely its hulking chassis that feels more hand-tank than gaming mouse. The body of the device is a smooth, matte plastic that’s sufficiently grippy for comfortable use. The Nyth’s curvature is subtle because it’s spread over a long body. But its substantial width means it’s very comfortable to hold, unlike the awkwardly thin Razer Diamondback.

I’ve always been partial to larger gaming mice; you’re using these devices for extended periods of time, so you need them to be as ergonomic as possible. Thankfully, the Roccat Nyth is one of the most comfortable mice I’ve ever used, and ranks alongside the Razer Mamba (2015) – a personal favourite – for well-considered design.

Aesthetically, the Roccat Nyth is an obvious gaming mouse. It has prominent buttons, some harsh angles, and a fearsome presence that means you won’t mistake it for an ordinary desk mouse. I prefer the more refined approach generally taken by Steelseries and Razer, which look a a bit more subtle on the mouse mat. But it’s down to preference; if you like big, pointy mice and scaring little children with your peripherals, the Roccat Nyth is perfect. 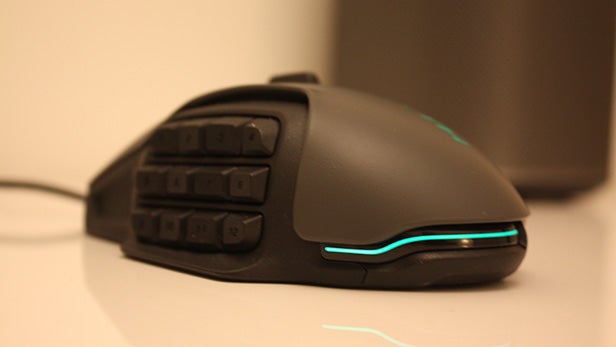 In terms of buttons, you’ve got plenty of choice. On the left side of the device, there are a total of 12 programmable buttons. On the top, there’s another button, a textured, rubber scroll wheel (clickable, of course), and a flick switch that you knock from side to side with the knuckles of your index and middle finger knuckles. It’s a slightly awkward motion to get used to, but it’s placement means it’s hard to accidentally knock. All of these are reprogrammable – but wait, there’s more.

The Roccat Nyth lets you remove every single button on the left panel, and comes with a wide roster of spares. Overall, you have access to 12 standard buttons, 12 curved buttons, six larger buttons, and three ‘dumb’ panels that render the button rows useless. The buttons are unlocked from their position using a release slider on the underside of the mouse, so don’t worry about knocking any of them out mid-game.

These side buttons are a little small, which makes them tough to hit accurately. And worse still, they all rest directly under the thumb; if you squeeze very slightly while making quick motions, it’s very easy to accidentally hit a key. Letting your thumb drop to the very bottom of the mouse is a simple workaround for this, mind.

It’s also worth noting that the buttons are made entirely from plastic, so Roccat recommends particularly adventurous users 3D print their own for optimum performance. I think that sounds like unnecessary faffing around, but it’s entirely up to you.

On the right side of the mouse, you’ve got a side panel that’s entirely detachable. The Roccat Nyth arrives with two panel inserts. One is large and gives your pinky finger somewhere to rest for palm grip, while the other is very nearly flat, to keep the mouse svelte for claw grip. These panels attach magnetically, and pop in and out with ease.

The buttons and the side-panels all arrive packaged in a neat little carry case. It’s a welcome addition, as having them all loose in a bag or desk drawer would be an absolute nightmare. Roccat aimed for impressive customisability with the Nyth, and it’s hit the nail right on the head. 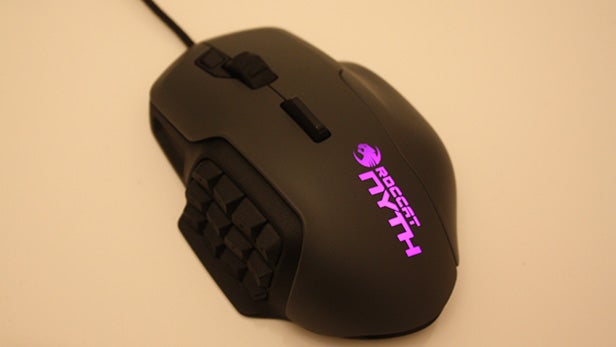 Most gaming mouse manufacturers have a corollary software suite they peddle with their wares – in this case, it’s Roccat Swarm.

Roccat is still green to the mouse game, and Swarm feels a little unrefined at present. It doesn’t offer some features available on rival platform Razer Synapse – like heatmapping, for instance. What’s more, I found that changes I made to button layouts and DPI settings would sometimes inexplicably revert. Simple bugs are easy to iron out however, and it’s likely that Roccat Swarm will improve over time.

What’s more, the Roccat Swarm has all of the features you’d expect at a minimum. I’m talking about the core stuff like sensitivity adjustment, settings profiles that load based on the program running, lighting colour customisation, and adjustable lift-off distance. Most users will find plenty to tinker with in Roccat Swarm, even if you’re not getting the depth offered by Razer Synapse.

Overall, Roccat Swarm isn’t perfect just yet, but it’s a commendable effort for a company still taking its first steps in the industry. 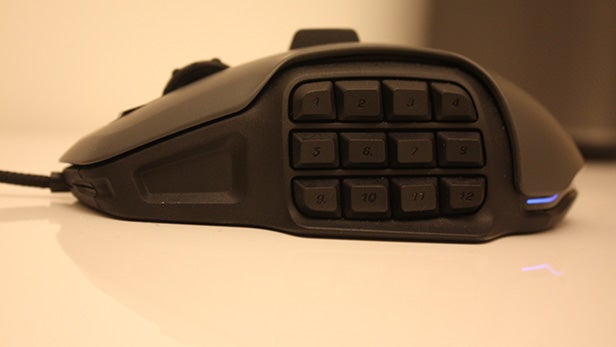 All of this fancy design is no good if the Roccat Nyth doesn’t actually work well as a mouse, right? Fortunately, it performed excellently when tested over well north of 20 hours of gaming.

The Roccat Nyth uses a twin-tech R1 laser sensor with a maximum DPI (dots-per-inch) of 12,000. The sensor tracked very accurately, although I still experienced a smoother ride with the 5G sensor featured on the Razer Diamondback and Razer Mamba (2015). I used the Nyth on several gaming mouse mats and (very occasionally) experienced slight cursor jumps. I’d say the Nyth’s sensor is more on par with the 4G sensor on the Razer Orochi – by all means an excellent bit of kit. This is all enhanced by a top-end reponse time of 1ms, and a polling rate of 1,000Hz – more than you’ll ever likely need.

The Roccat Nyth’s DPI – effectively sensitivity – is high enough to satisfy gamers of all ilks, bottoming out at 200, and capped at a lofty 12,000. Most gamers with Full HD displays won’t be treading too far beyond 3,000, but users with 4K/UHD panels will get good use out of the wider DPI range.

Overall, the Roccat Nyth’s performance as a gaming mouse is excellent, and is only let down by an occasional misplaced prod of a button on the left-hand panel. 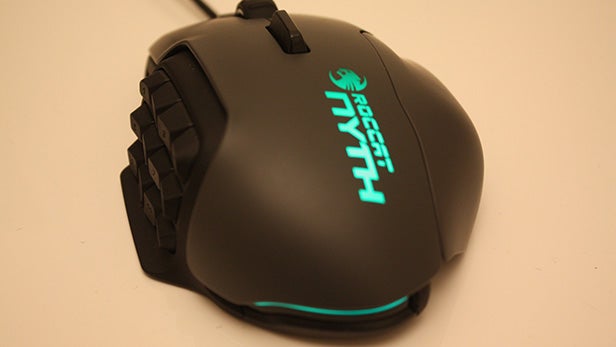 Roccat Nyth – What games work best with this mouse?

This section is easy; the Roccat Nyth will suit anything you want to play. Roccat went to great lengths to ensure gamers who play a variety of genres won’t need to look beyond this mouse.

When it comes to RPGs and MMOs, which are a usual sticking point for gaming mice, the Nyth excelled. Its wide array of buttons, combined with the impressive customisability, means the Nyth is a formidable opponent versus a market leader like the Razer Naga. Similarly, eschew some (or all) of the buttons and you’ll have no problem playing low-hotkey games like shooters, MOBAs, and action titles.

In summary, if you plan on playing anything at all, the Roccat Nyth probably has a setup that’ll suit your style. 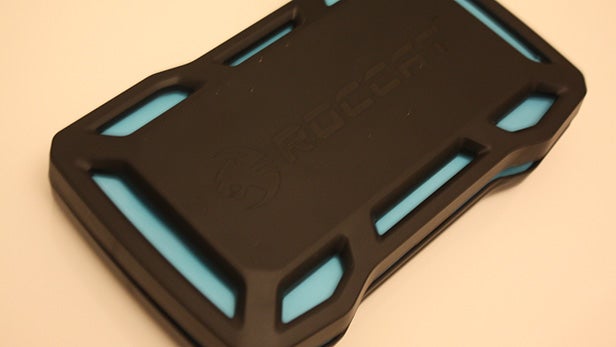 Should I buy the Roccat Nyth?

The Roccat Nyth is a great choice for gamers who enjoy playing a very wide range of genres. It’s an accurate mouse with fantastic hardware and a well-considered design that makes it one of the most versatile mice on the market.

That said, it misses the mark in a few ways. In an effort to promote customisability, Roccat failed to make the Nyth look very beautiful. The left-side buttons are easy to accidentally press. And occasional – and bewildering – tracking/software errors can be frustrating.

At £90, it’s an expensive mouse, but some retailers are peddling it at a discounted £70 rate. That’s not so bad, but the Logitech G602 (now around £50) is still a better pick if you’re cash-conscious.

And if you’re not bothered about customisability, the Razer Mamba Tournament Edition (£70-90) is prettier, more consistent, and ships with tried-and-tested software.

A spatter of mistakes showcase Roccat’s infancy in the market, but the Roccat Nyth is a true feat of customisability. The Nyth is versatile, comfortable, and performs well – all at a reasonable price.