Razer has shown interest in on-the-go gaming with the svelte Razer Blade and Razer Blade Stealth laptops, but mobile gamers also need a mouse to pair with their luggable rigs.

Enter the Razer Orochi (2015), a small, wireless mouse that’s designed to be carted between LAN parties with relative ease.

The Razer Orochi isn’t a new entry to the company’s peripheral line-up; this is a direct sequel to 2014’s Orochi mobile gaming mouse.

But with its efforts to minimise the form factor, has Razer still been able to maximise performance? 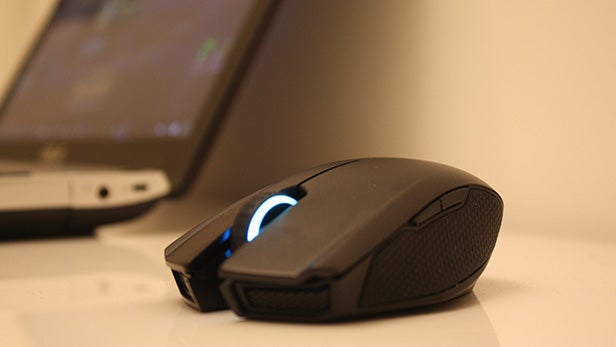 I’ve used plenty of gaming mice – Razer or otherwise – in my time, and the striking thing about the Orochi is its diminutive size.

The new Razer Orochi retains the pint-sized dimensions of its predecessor, and is about half as big as the Razer Mamba (2015). It probably won’t be too shocking to non-gamers however, who’ll find its form factor akin to Apple’s Magic Mouse. For the must-knows, the exact dimensions are 99mm x 67mm x 35mm.

As such, the Razer Orochi is also lighter than many of its contemporaries, although the battery – and high-spec innards – give the device a very welcome central heft. Small mice often seem like they’re about to be yanked off the mat with every gesture, but the Orochi is plenty substantial and stays glued to any given surface. 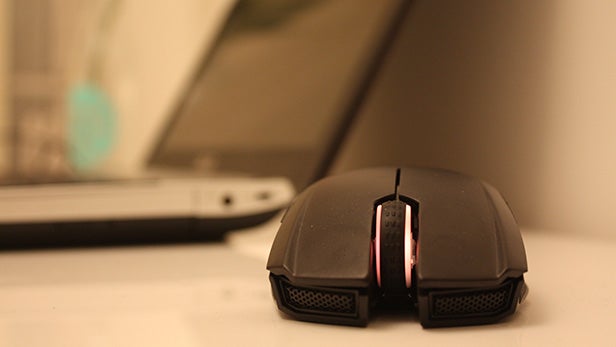 The Razer Orochi is nice enough to hold, although I personally find small mice awkward; it’s definitely too small for effective palm-gripping, though toddlers, hamsters, and Frodo Baggins may disagree. The mouse has a smooth, curved plastic body, with textured rubber sides for added grip.

The sides are indented, which mean your thumb and pinky fingers aren’t being dragged across the mousemat – chafing, begone. The scroll wheel is also rubberised and textured, thankfully. The bottom side of the device could be smoother; the more expensive Razer Mamba 2015 glides far easier, but that’s double the price.

Overall, the Razer Orochi ticks all boxes when it comes to developing a small, light, easy-to-lug gaming mouse intended for multiple users. It’s even got a neat carry case that has room for a cable. I can’t complain, really – it’s got the classically slick Razer aesthetic. Other than my design niggle about small gaming mice feeling a bit rubbish, the Orochi is a solid, well-conceived mouse. 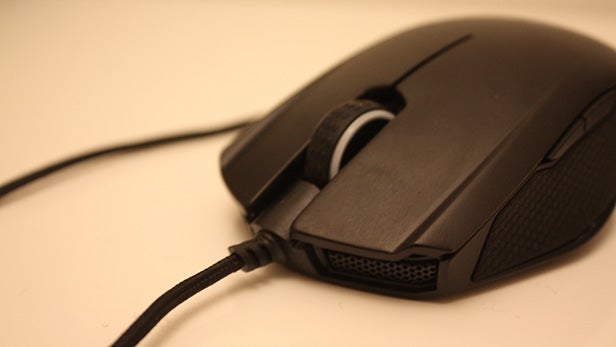 Right, so what does the Orochi have on offer that sets it apart from standard office fare? No gaming mouse would be complete without reprogrammable buttons, of which the Razer Orochi has a total seven. Two of these are left- and right-clickers, one is the scroll wheel, two are DPI-switchers, and two are free to map. Of course, they’re all customisable and will do whatever you like.

The Razer Orochi also packs a 4G laser sensor – a grade below the company’s latest 5G fare. However, it’s still a high-quality sensor, and features a maximum DPI (dots-per-inch) of 8,200. DPI effectively equates to mouse sensitivity, and 8,200 is more than enough; most won’t venture far beyond 2,000-3,000. However, for those with high-resolution displays and nerves of steel, 8,200 could be a winner.

Then there’s the wireless connectivity, which is another big seller when it comes to the portability of this mouse. The Razer Orochi takes two AA batteries, and connects to your rig via Bluetooth. Wireless mice are oft-derided in the gaming community for their sub-par performance, but there’s no reason why you can’t just connect the Orochi to your rig using the USB cable supplied when duty calls.

The final standout feature is Chroma, a tickbox increasingly checked with Razer products. Chroma is Razer’s custom-built lighting software that makes the company’s peripherals rank amongst the best-looking devices on the market. Chroma gives users access to 16.8 million colours, which can be lorded over using the Razer Synapse software suite. Unfortunately, Chroma does feel a little wasted on the Razer Orochi, as only the scroll wheel lights up. Nevertheless, a mouse that glows a little bit is always better than one that never glows at all.

Related: How much does it cost to get your PC Oculus Rift Ready? 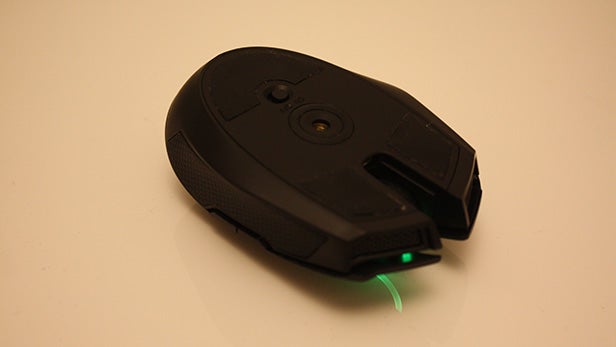 One of the best perks of using a Razer mouse is the corollary software that goes with it. Razer Synapse is the company’s gaming suite, and gives users access to a wide selection of game-enhancing features. The software works across Razer’s entire range of peripherals, so you’ll only need to download it once no matter which mice or keyboards you buy from the company.

That synchronisation also means you can do cool things like match up lighting on Razer devices. That means you could have your keyboard and Orochi both “breathing” green or cycling through colours in perfect harmony.

Through Synapse, you’ll also get access to gaming-specific features like game-specific profile settings, the ability to change mouse sensitivity, button macro creation, and more. Game profiles are particularly interesting; you can have dedicated settings load as soon as a particular game is booted up. Of course, you’ll need to be signed into the Synapse cloud to use this feature; Razer still doesn’t offer on-mouse storage.

The Razer Synapse suite offers plenty of tinker-ability for those looking to maximise performance – heat-map movement tracking, for instance – so the Orochi gets a thumbs-up on the software front. 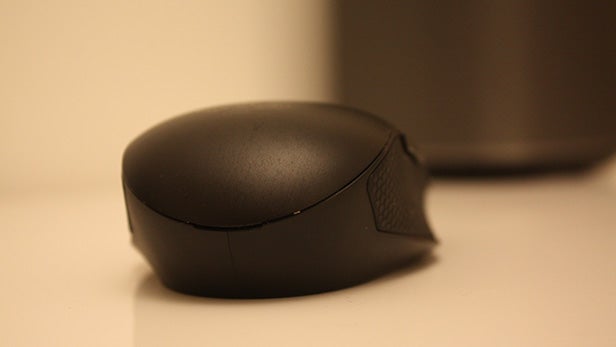 So design and software are on (mostly) on point; is the performance up to scratch? In brief: The Razer Orochi is pretty damn good, but it’s not the best on the market.

As mentioned, the Orochi comes equipped with a 4G laser sensor. That sensor has already been usurped, so it seems odd that Razer opted to use the 4G one instead of the 5G kit featured on 2015’s Diamondback and Mamba. As a regular user of the new Mamba, the Orochi does feel less smooth in use – but then there is a significant pricing difference. Nevertheless, the Orochi performs very well, and has excellent tracking for a mouse in its price bracket. The maximum DPI – 8,200 – is also fairly middling by 2016’s standards, but anything higher is generally considered to be going beyond necessity.

Unfortunately – and unsurprisingly – there is a drop-off in performance when using the Razer Orochi in wireless mode. The response time drops from 1ms to 8ms, and the polling rate falls from 1,000Hz to a lowly 125Hz. Both are fine for casual PC use, but you’ll want to be using a wired connection to ensure maximum performance. The 8ms ping might not sound like a lot, but couple that with poor network latency and bad server response time and suddenly the milliseconds rack up.

Finally, there’s the battery life. The Razer Orochi is a wireless mouse and, while it can be used in wired-mode, the device’s charge is a key metric. Razer boasts that the Orochi will last for seven months by its usage estimations; that actually equates to around 60 hours of continuous gaming. I didn’t have a chance to test it to its limits, but it didn’t die on me with about 25-30 hours of use. Whatever the case, the Razer Orochi uses common AA batteries, so it’s easy enough to switch them out. And if you’re caught on zero charge without spare batteries at a clutch moment, it’s simple enough to switch back to wired. 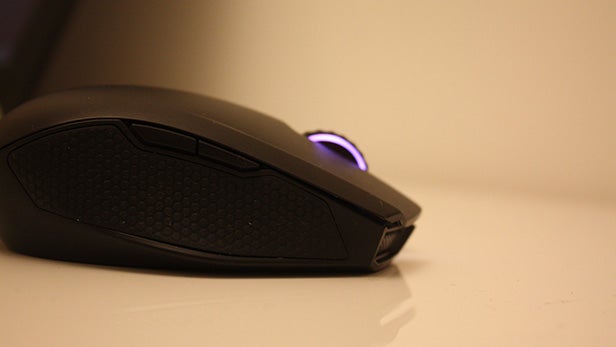 Razer Orochi 2015 – What games work best with this mouse?

The Razer Orochi is a pretty versatile mouse; it’s lightweight, accurate, and will suit gamers who move their kit between locations often.

That said, the Orochi is better for some game genres than others. It’s advertised as having seven programmable buttons, but really you’ll only be re-mapping between two and four of these – depending on how much you value DPI switchers. As such, this isn’t a great mouse for playing hotkey-heavy games like World of Warcraft; players used to a multi-button beast like the Razer Naga will find it a little frustrating.

You’ll find the Orochi’s real worth in games with a low number of commands, and that benefit from quick mouse actions – think MOBAs or first-person shooters.

In any case, if you’re playing competitively, you’ll want to have this mouse wired. As mentioned earlier, it’s tough to recommend the Orochi for high-tier multiplayer gaming when it’s off-USB. But plug it in, and you should have no issues tearing up Counter Strike or your twitchy shooter of choice. 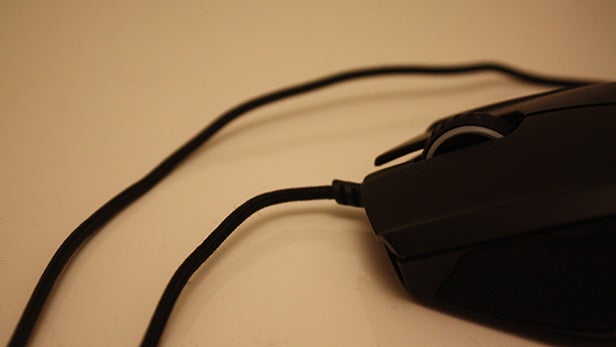 The Razer Orochi is great little mouse that will suit its target demographic just fine. It’s a tad expensive at a penny shy of £65, but other manufacturers of small mice will struggle to match the attractive design of the Orochi. The software is great, the tracking is excellent, and you’ve got Synapse to back it up. Minor downsides like the outdated sensor and the diminutive size are easy to overlook.

That said, the Orochi is an awkward mouse to recommend, because it’s a very niche pick. Fortunately, Razer – and the peripheral industry at large – have plenty of alternatives on offer, so you’ll only want the Orochi if you fit its narrow use-case. If you’re someone who wants a mouse to use in multiple locations, hates cumbersome, desk-hogging peripherals, and values aesthetics, the Orochi is a great pick.

But what are the alternatives? With a more sizable chassis, the Logitech G602 is my preferred wireless mouse at this price point. If money is no object, the Razer Mamba 2015 is a clear winner. But if you’re smitten with Razer, and you don’t have serious cash to burn, you won’t be disappointed with the Orochi.

It’s a little small and a little expensive, but the Razer Orochi is one of the best wireless mobile gaming mice on the market.