What is the Logitech G900 Chaos Spectrum?

As a result, it’s pretty expensive at £134.99, but it packs in incredible hardware for that price. From a technology standpoint, the G900 is unparallelled as far as wireless mice are concerned, and its design, too, is as slick as they come.

Nevertheless, the Logitech G900 faces stiff competition from its formidable rival, the Razer Mamba (2015). And the real question is this: can you ever truly justify spending £135 on a mouse? Read on to find out why you definitely should. 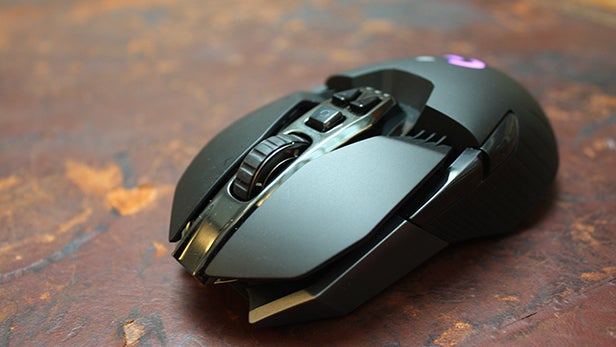 For a long time, it appeared that Logitech was reluctant to follow the gaming peripheral industry’s trend of big and bold design. That’s in the past: the Logitech G900 will dominate a desk with its big, pointy, glowy looks. If you’re looking for a device with desk appeal, you won’t be disappointed.

When I first held the Logitech G900, my immediate thought was that it was empty. It’s super-light, weighing only 107g, which is incredible for a wireless mouse. The Razer Mamba – not particularly heavy, by any means – weighs around a fifth more. Logitech’s weight-saving strategy is so exteme, even the scroll wheel has been hollowed out and its innards replaced with a “spoked” design to help trim the fat.

The Logitech G900’s body is curved, with hard edges. It’s ambidextrous, so you can use it whether you’re left- or right-handed. And this isn’t achieved at the expense of comfort; it feels fine in either hand, and works with both palm and claw grip. 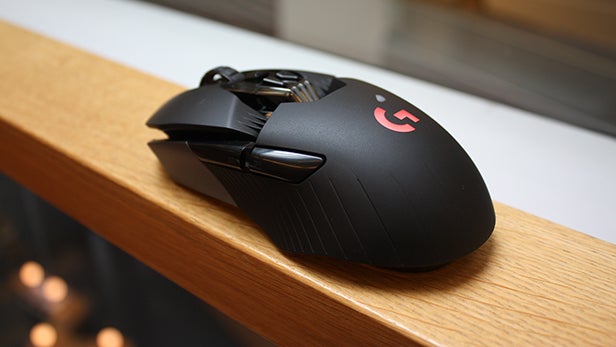 The left- and right-clicking buttons feel solid, and the actuation distance is low; the time between your finger moving and the switch clicking is very short.

The mouse also has two buttons on the left of the device, positioned perfectly under the thumb. If you’re a lefty, fear not; the buttons magnetically detach, and can be moved to the right side instead. You can also have all four buttons attached to both sides if your gaming style needs more macros.

On the top of the device you’ll find the scroll wheel, which is coated in textured rubber. Behind this is a switch that unlocks the wheel bearing, so rather than clicking in increments, it will just spin freely. This is surprisingly satisfying and is great fow when you’re in work mode, scrolling through massive documents. If that’s more your gig, the Logitech MX Master is a better bet, with its adaptive scrolling that combines freewheeling and notched scrolling. Behind that are two buttons for toggling through your DPI presets – that’s shorthand for mouse-sensitivity settings. Finally, on the underside of the mouse is a power button.

Despite its light weight, the Logitech G900 feels like well made. Apparently the device is rated for 250km of travel and the switches have been tested with 20 million presses by the quality assurance department.

With all good gaming mice come a healthy roster of features to boot, and the Logitech G900 is no different. First stop: lighting.

The Logitech G900 is branded ‘Spectrum’, which is marketing speak for glowing LED strips. If that concept seems familiar, it’s because it’s basically identical to Razer’s ‘Chroma’ in every way but name. Apparently gamers now expect their mice to glow, and in increasingly elaborate ways, so we can’t blame Logitech for mirroring the concept. 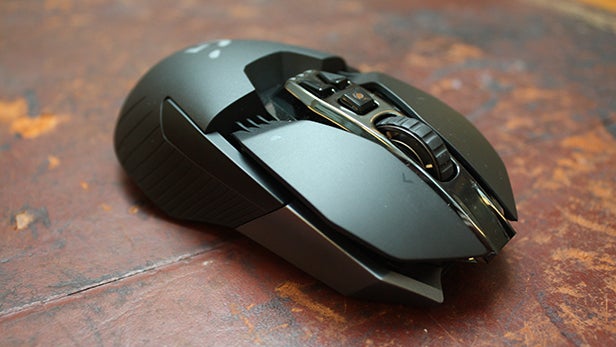 There are 16.8 million colours at your disposal, any one of which can be selected for the G900’s lighting through Logitech’s software. There are also lighting patterns available – Breathing, for example, makes the light fade in and out in a soothing fashion.

Like Razer, Logitech has its own software for configuring the G900’s many options. For instance, you can adjust the DPI presets so you’re using the buttons only to switch between comfortable levels of sensitivity. You can also modify the polling rate – how often the mouse pings the computer – to 125Hz, 250Hz, 500Hz, and 1,000Hz. This feature is fairly niche, but handy if your PC’s processor isn’t up to the task of handling 1,000 inputs every second.

You can adjust lighting for the mouse too. You can save lighting profiles – and your other defaults – to the G900’s on-board memory, making it easy to use the mouse on different computers without having to adjust the settings each time. 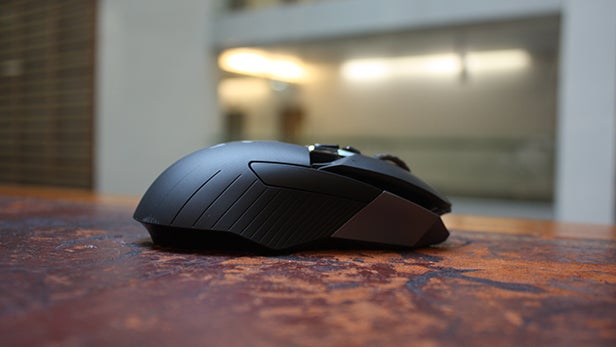 It is also possible to set up macros and reassign buttons to various tasks. And if you like using different setups for different games, Logitech accounts for that too. You can assign mouse profiles to specific titles, so when a game loads, the Logitech G900 will automatically adopt the right settings. At this price I’d expect nothing less.

Performance is where the Logitech G900 really shines. I was hugely impressed by the accuracy of its tracking. I didn’t experience a single cursor jump, despite using the mouse on several surfaces – wood, plastic, and a SteelSeries mousepad.

For a wireless mouse, this is no mean feat. Logitech has made a big song and dance about the G900’s ability to counteract the fear that wireless mice are prone to lag caused by interference, and while it’s very difficult to test in real-world conditions, it looks like it’s worked a treat.

This success is partly thanks to the G900’s ability to dynamically switch to less noisy frequency channels, ensuring that the mouse is always operating under the most ideal RF conditions at any given time.

But that’s not all. The Logitech G900 can track at 40G acceleration, and up to speeds of 300 inches per second. That’s faster than your hands will ever move, so rest assured that the G900 will cope admirably with twitch gameplay. 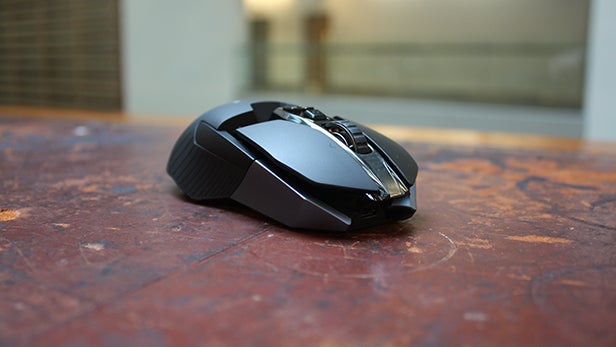 However, what’s more exciting than the tracking is the Logitech G900’s low latency. Logitech claims a speedy 1ms report rate in both wired and wireless modes. That’s important, because wireless mice are considered by some to be too laggy to rely on in tournament gaming.

Part of the G900’s speed comes courtesy of its support for 2.4GHz wireless connection, and the high-end PMW3366 sensor – a favourite among gaming mouse enthusiasts.

On the matter of sensors, it’s important to note that the Logitech G900 has a DPI range of between 200 and 12,000. Realistically, most users will never venture past 3,000. Those with high-resolution monitors – QHD or UHD – may venture higher, but it’s unlikely anyone will be playing at 12,000.

The Razer Mamba goes all the way up to 16,000, although I can’t imagine this will be a deal breaker for anybody but the twitchiest gamer but is worth noting all the same. 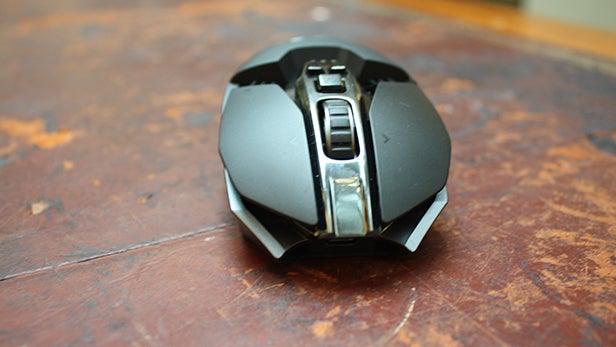 The final point is battery life. Logitech claims a respectable 32 hours of continuous gameplay per charge, although this drops to 24 hours if you have the mouse lit up. I didn’t have a chance to test the G900 to lifelessness, but it never died on me even in ridiculous, 12-hour sessions, and I kept it charged nightly. I do wonder whether Logitech could have upped the weight ever so slightly and bolstered its stamina just a little, especially when you consider that Logitech doesn’t ship the mouse with a dock, which seems a bit stingy given the price and when you consider that Razer does supply one with the Mamba.

To fully charge the mouse from empty takes about two hours, which is reasonably quick. But the likelihood is that many users will probably have the mouse plugged in overnight anyway, so charge time won’t be an issue. You can also play in wired mode if the Logitech G900 runs out of juice mid-game. 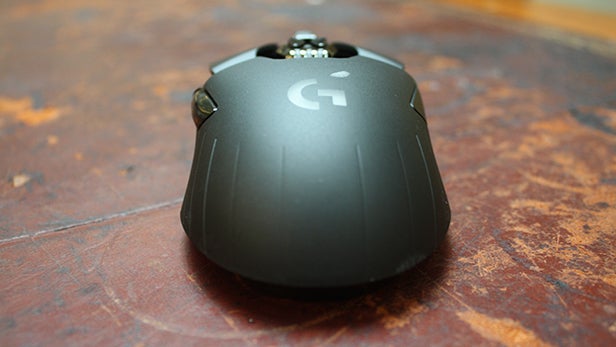 I tried the Logitech G900 on a number of games, including World of Warcraft, League of Legends, Left 4 Dead 2, and Counter-Strike: Global Offensive.

For L4D2 and CSGO, the Logitech G900 performed excellently. The low latency and accurate tracking made tearing off the heads of zombies and terrorists alike a breeze. It’s certainly the best mouse I’ve ever used for first-person-shooter gaming, so if you’re a hardcore FPS gamer, the G900 is a fantastic buy.

The G900 proved a great all-rounder, too, working just fine in League of Legends (MOBA) and World of Warcraft (MMORPG). The fact that the G900 isn’t bogged down by hardware faff makes it easy to play any game without much setting up. What’s more, the light build and comfortable design meant that I was able to play League of Legends for hours on end with very little fatigue. And I click a lot. 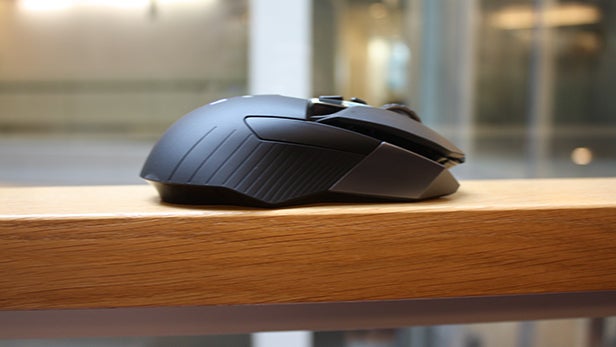 Perhaps one of the few downsides of the Logitech G900 is that it doesn’t have many buttons. That won’t annoy everyone, but some MMO players that are used to 18-button spreads might find the minimalism frustrating. Still, the performance is better than alternatives, so it’s a trade-off I think such MMO gamers will be willing to make.

All in all, the Logitech G900 will suit most game genres, but it won’t suffice for those who prefer to map 20 different keys to their mouse.

Should I buy the Logitech G900?

The Logitech G900’s performance is excellent, and I daresay class-leading and the design is among the most sensible and refined that I’ve ever come across in a gaming mouse.

What you probably want to know is whether you should opt for this or the Razer Mamba (2015). After all, they’re the same price, they’re effectively the same proposition, and they’re both damned good products.

For me, the Logitech G900 edges out, if only slightly, over the Mamba. The performance – in terms of tracking, latency, and connectivity – is simply superior to the Mamba, although not by a long way. I’d still argue that the Razer Mamba (2015) sits a little more naturally in the hand if you’re a righty, but Logitech wins out on hardware overall.

In all honesty, both mice are excellent, and you won’t regret buying either one of them. I personally prefer the Logitech in terms of feel, although the Razer Mamba is better value with its dock and customisable hardware.

The Logitech G900 is the best gaming mouse I’ve ever used, and while £135 is a massive premium to pay, if you’re after the best in class for gaming mice, you can’t go wrong.