What is the Pure Jongo T2?

The Pure Jongo T2 is a the lowest-end of the Jongo speakers. It’s not the smallest, an honor that belongs to the Jongo S3, but this one costs less money, selling for £130 rather than £170.

We’re on-board with what Pure is trying to do with Jongo – make a wireless speaker that offers the sleekness of the Sonos system with the flexibility of a Bluetooth speaker – but the Jongo T2 doesn’t really sound good enough to satisfy.

The Jongo T2 is a fairly small and light wireless speaker. It’s not designed to be portable – there’s no integrated battery and no space in which to put one – and the use of a fabric grille means it’s not rugged either. This speaker wants to stay at home, on a shelf or worktop.

Style-wise, it’s entirely on-brand. While there are black and white Jongo speakers, the range also offers a bunch of brightly-coloured grilles too – green, yellow and orange. 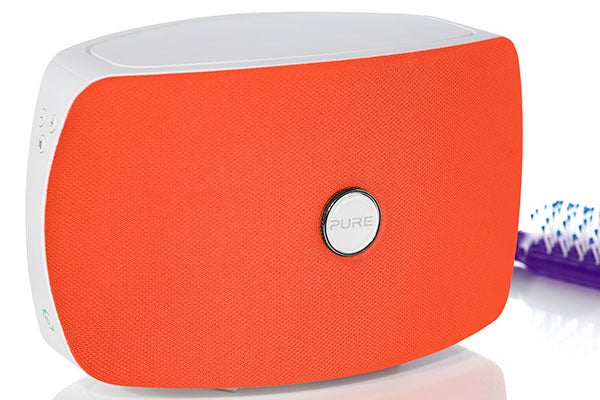 In the larger Jongo speakers, the colourful grilles can look a little like something that belongs in a child’s playroom, but the small Jongo T2 can just about get away with it.

The Jongo T2 is 25cm wide, and 12cm deep, making it pretty easy to squeeze onto a bookshelf. It’s also designed to sit either ‘lengthways’, or upright on a stand (which is not included). There’s a threaded stand port on the back, and the Jongo logo that’s part of the grille can be rotated to match the orientation.

It’s a simple, smart design, but build-wise the Jongo T2 is not going to make any jaws drop. It’s a moulded white plastic enclosure that doesn’t have a great deal of weight to it given it includes an amplifier.

Although the Jongo speakers can be considered a rival to the long-established range of Sonos multi-room wireless speakers, Pure’s range is a bit more flexible. There’s a Wi-Fi-based wireless system that lets you control a bunch of speakers from a smartphone, but you also get a wired input and Bluetooth streaming.

On the back is a 3.5mm stereo input, and Bluetooth lets new devices get hooked up to the Jongo T2 without having to worry about installing an app or any elongated setup procedure.

There is a bit of work involved in getting the Pure Jongo T2 hooked up to your home Wi-Fi, though.  It requires pushing certain buttons for several seconds, visiting the Jongo’s own Wi-Fi hotspot and entering your home network’s Wi-Fi password through a web browser. It’s a common setup for devices like this, but we found it trickier than usual because the Jongo T2 didn’t always behave as the manual suggested it would – the nightmare of any tech novice.

At one point the Jongo T2 even started asking for a mystery password in order to connect. Performance was also patchy during our testing, at times leaving the sound phasing in and out rapidly – likely due to wireless interference, but it was particularly bad in this case. 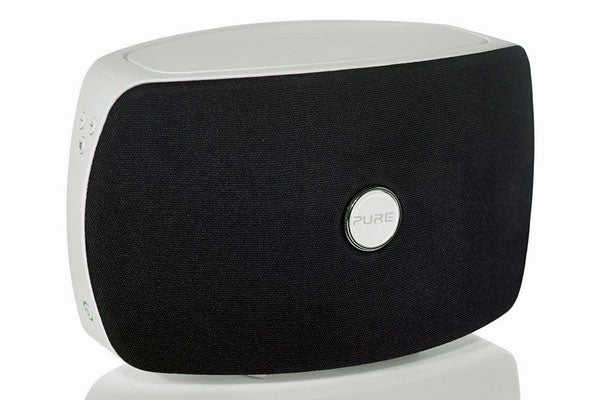 To get music to play using the Jongo T2’s Wi-Fi connection, you need to use the Pure Connect app. It’s much better than the radio connection apps of old, but there are some significant limitations.

It’s fairly slick and feels right, with the sort of gesture-based control that feels right when used with a smartphone. However, it’s only useful if you’re happy to be stuck with your own music and Pure’s streaming services.

You get Pure Music, Pure Sounds and internet radio, but no Spotify, no Last.fm, no Rdio and no bloom.fm. The Pure Jongo T2 hardware may be more versatile than Sonos equivalent, but its software is significantly more restrictive.

Pure Music is the main event here – a Spotify equivalent that costs just £4.99 a month. This is the cheapest ‘all you can eat’ mobile music streaming service we’ve seen. And while there is a £9.99 premium subscription that lets you download tracks for offline listening, the £4.99 sub remains a bit of a bargain. Streaming quality is relatively low, though – 128kbps where rivals like Spotify go all the way up to 320kbps.

Ultra-high sound quality is not Pure Music’s forte, and it’s not the Jongo T2’s, either.

The speaker uses two fairly small 3-inch cone drivers, the same size used in radios like the Pure One Elite. Our issue with the Pure Jongo T2 is that while it offers greater scale and volume than a kitchen radio, fidelity isn’t really much better.

The Jongo T2 has worse treble definition than the Evoke F4 – and, more significantly, also much worse than the Sonos Play:One, the new ‘low-cost’ Sonos wireless speaker. Bass depth is also quite poor, making this feel like a box that Pure has simply stuck some off-the-shelf driver units into, rather than thinking more carefully about how to get the best performance out of a box this size.

For a speaker to provide you with music in the kitchen or bedroom, the Jongo T2 is sufficient, but we wouldn’t advise attempting to make a hi-fi using them. Its pretty unimpressive, boxy and hemmed-in sound just isn’t up to the task – you can make them into a stereo pair, but that won’t solve the tonal issues here.

Should I buy the Pure Jongo T2?

Initially, the Pure Jongo T2 seems like it might be a bit of a bargain. It’s cheaper than the Jongo S3, but offers worse sound quality – if slightly larger-scale output.

Pure has clearly tried pretty hard to get the price down to this level, while having to squeeze in Bluetooth and Wi-Fi. However, sound quality has suffered, and annoying performance and reliability issues only make the Jongo T2 harder to recommend.

If you need multi-room audio, we recommend spending a little more on the Sonos Play:One. And if you’re happy to live with a solo wireless speaker, the Creative D3xm is a sweeter-sounding speaker at just £10 more that also makes a decent soundbar.

The Pure Jongo T2 is designed to be an accessible entry point to the world of multi-room and wireless audio. However, ropey sound quality and performance issues are more likely to put you off in the long run.

Next, read our round-up of the best portable speakers