What is the Creative D3xm?

The Creative D3xm is a wireless speaker, one that uses the Bluetooth standard rather than Wi-Fi. This is nothing new, but the D3xm has an interesting extra – it can also pair with other Creative D-series speakers to intelligently beef-up the sound. These other speakers include the slightly larger D5xm and the DSxm subwoofer. However, at £150 the Creative D3xm sounds good enough to consider without any of that pairing fanciness. 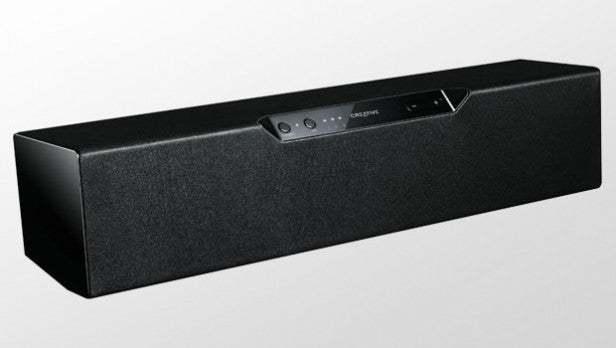 The Creative D3xm looks a lot like a small soundbar. A chunky rectangle that’s 41cm long, it’ll happily sit under most TVs. However, unlike some soundbars, the Creative D3xm doesn’t have any wall-mounting options. It’s designed to sit on a surface, on its little rubber feet.

Aside from its glossy plastic side panels and a small control panel on the front, the D3xm is almost completely covered by speaker grille fabric. This isn’t a speaker that’s out to pull focus – it’s pretty innocuous-looking.

It also doesn’t try to pack-in too many ‘core’ features. You get Bluetooth and a 3.5mm jack input (which lets you use this as a TV speaker as well as a wireless speaker), but there’s no Wi-Fi and no battery. This isn’t a speaker that tries to do everything.

If you look for extras they are there, though. There’s an app you can download to control various aspects of the Creative D3xm – it’s available for Android and iOS.

Aside from altering the EQ, with modes for quiet (night-time) listening and movie-watching among others, you can alter how multiple Creative D-series speakers play with each other. It’ll only work with current-gen Creative speakers (not the D-series Bluetooth speakers from a few years ago) but you can treat them rather like a surround system.

Of course, with a stereo jack and stereo Bluetooth streaming to use, no number of speakers is going to make the setup a true surround one. It’s limited to 3.1, and it’ll be derived from a standard stereo signal.

You can also calibrate the Creative D5xm for your room, using an integrated microphone. Like the multi-speaker pairing, this has a whiff of home cinema about it. 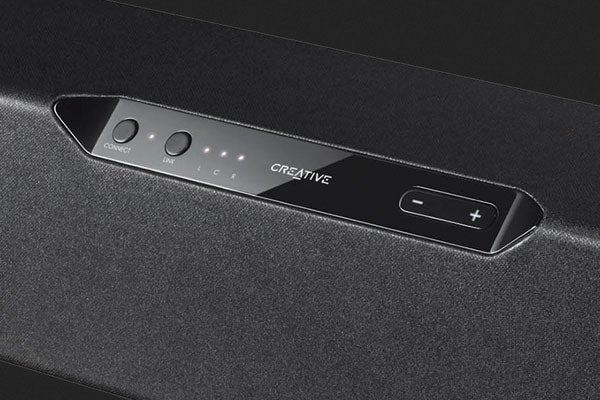 We primarily tested the Creative D3xm on its own rather than hooked up to a subwoofer and additional speakers. And for the price, we think it’s great.

It’s tonally balanced, much less sonically compromised than the smaller portable speakers you can buy at the price, and offers good detail and clarity. Creative appears to have improved treble response since the earlier D3 Bluetooth speaker, making the D3xm an excellent second hi-fi or bedroom speaker.

The one obvious limitation is that bass depth is limited. Creative hasn’t published any details about the exact specs of the driver array in the D3xm, but physics means they can’t be particularly big. The sound is in no way thin and weedy, but the speaker is incapable of reproducing low sub-bass, and switching between this and a larger speaker, the limited bass was fairly obvious. The model up, the D5xm, solves this problem and is only slightly larger. But it’s also £100 more expensive.

This is only a particularly serious consideration if you want the D3xm to act as a movie soundbar – in which case we’d recommend looking at the Creative Dsxm subwooder, which costs a additional £160. Hardly pocket change. We’ll look to bring you a review of that subwoofer soon.

Should I buy the Creative D3xm?

The xm range brings clever linking and sound optimisation features to Creative’s long-running series of Bluetooth speakers. They’re neat, but what we like most about the Creative D3xm is what we’ve always liked about these speakers. They offer a great sound quality for the price and a carefully-judged sound signature.

If you want a simple wireless speaker that’ll work with just about anything, and that can also function as a TV speaker, you can’t go far wrong with the Creative D3xm.