If you enjoy music and live anywhere more upscale than a grim bedsit, there’s a good chance your house or flat is littered with speakers of certain kinds. A hi-fi? The kitchen DAB radio? Your alarm clock?

Now imagine if you could control what each was playing with your phone. It’s this sort of concept that’s behind the Pure Jongo series – making multi-room audio accessible. The Pure Jongo S3 is the baby of the Jongo family. This wireless speaker is under 15cm tall, happy to be jammed in a corner, and it costs £170.

It’s reassuringly expensive given its size, but isn’t half flexible. 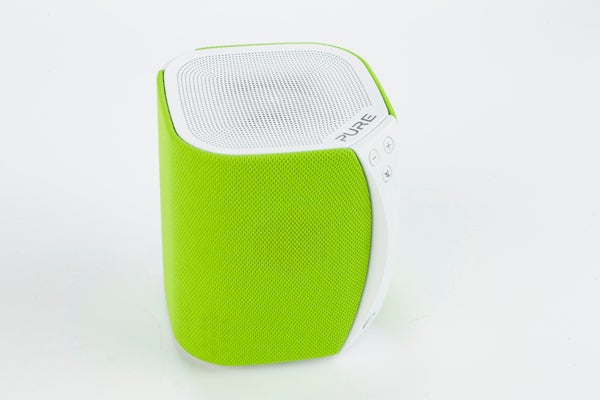 Pure wants to lower the barrier for entry into the world of multi-room audio. To kick things off, the Pure Jongo S3 tries to be as accessible as possible, in three main ways.

Point one: It hardly takes up any room. Adult-sized hands can grasp the thing in one mitt, its footprint is small and its rounded-off square-ish edges mean it can be bunged into corners of rooms easily. 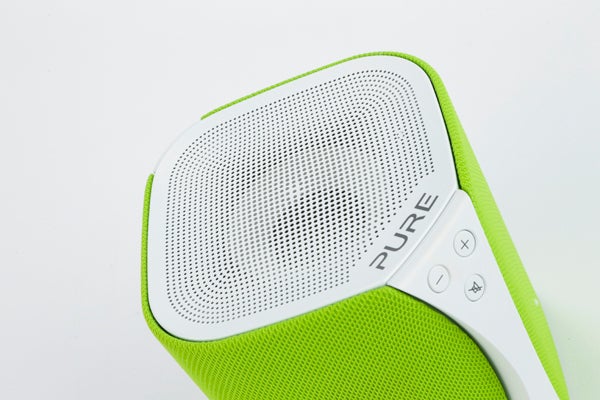 Point two: Although Pure really wants you to use the Jongo S3 within Pure’s own wireless infrastructure – the thing that allows Jongo multi-room to work – you don’t have to. The speaker also has Bluetooth, thanks to an unfortunately clumsy dongle plugged into the rear USB port. 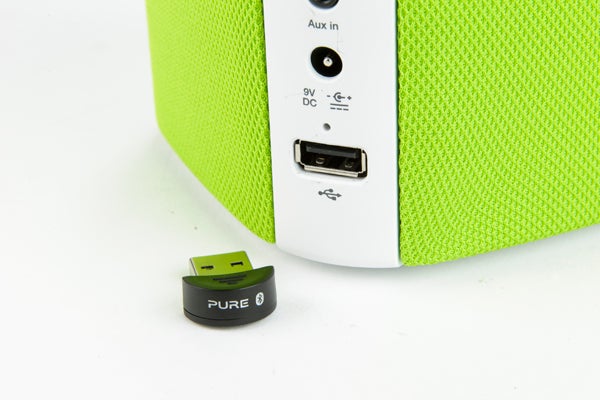 There’s also an aux 3.5mm input for those who want to hook up a… minidisc player or something similarly archaic. As it packs these connections and a 10-hour internal battery, the Jongo S3 is far, far more flexible than the Sonos equivalent, the Play:3. 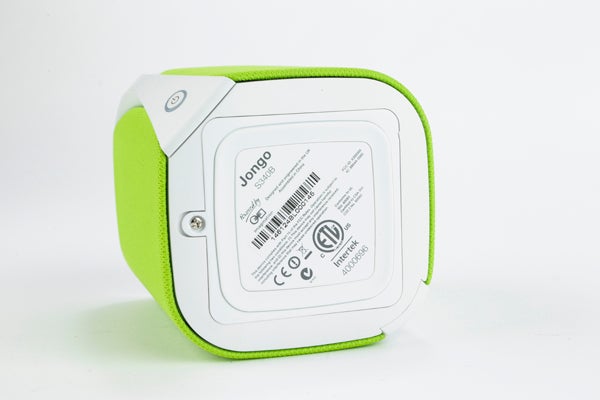 The battery lives under the trap door.

The Pure Jongo S3 has removable fabric-covered grilles that cover its sides. They’re available in array of bright shades that currently includes yellow, green, red and black. Without them the S3 is as ugly as a shaved cat. With them applied, it’s jolly – if not quite beautiful.

The Pure Jongo S3 does its best to be easy to use, but there are a few steps to go through to get the speaker hooked up to wireless. Its primary connection is Wi-Fi, which means you need to get it linked up with your router.

Although the setup process is guaranteed to terrify technophobic grans, it is simple. The Jongo starts pumping out its own Wi-Fi network once the Wi-Fi button on the back is pressed. Connect to this with a phone (or tablet), head to a specific page in the browser and enter your router’s security key – then you’re done. From then on it’ll automatically connect to your home network. 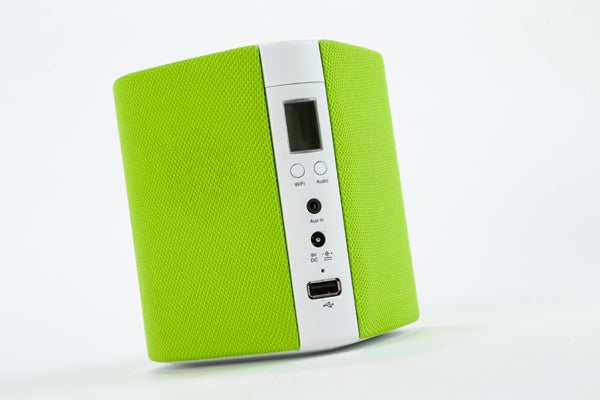 When hooking up to the Pure Jongo S3 over Wi-Fi you need to use the Pure Connect app, available for iOS and Android. This gives you access to your device’s own tunes, internet radio and Pure Music, the company’s own Spotify-like music streaming service. It costs just a fiver a month and grants access to millions of tracks.

In the past we’ve complained about the quality of Pure’s mobile app. But these days it’s pretty good. It’s clear, it’s swish and it’s pretty reliable. 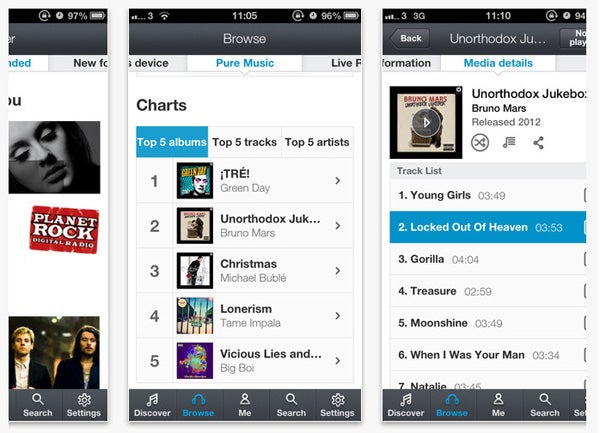 Much like Sonos’s multi-room system though, you’re locked into this app while using Wi-Fi. And unlike Sonos, Pure doesn’t give you access to Spotify, Deezer, Rdio and other streaming services – just Pure’s portals.

To connect to Spotify, you’ll need to use Bluetooth instead of Wi-Fi, which will send all audio from your device to the Jongo, including things like messaging alerts. Bluetooth performance was flawless, which it is not in all Bluetooth speakers.

As well as wireless control with a phone or tablet, there are small volume up/down and mute buttons on the Jongo S3’s front. 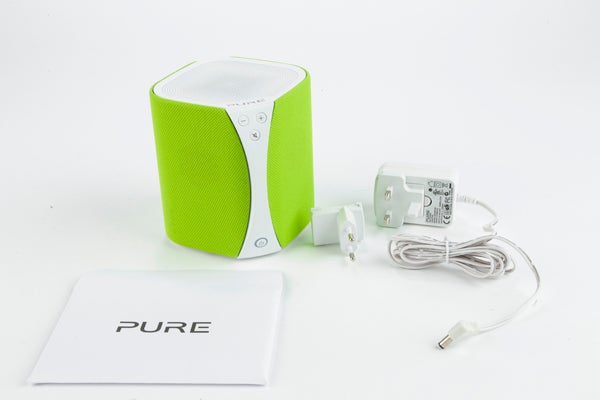 The Pure Jongo S3’s speaker drivers are built for ease and versatility. There are five drivers on this little box, four dealing with the treble and one larger speaker the bass/mids.

A 1-inch tweeter sits on each face of the S3, firing outwards. High-frequency sound is the most positional of all, and this 360-degree strategy gives the widest sound dispersal possible. The 3-inch “bass” driver sits on the top, firing upward through a coated metal grille. This makes the Jongo almost entirely flexible about where it is positioned. 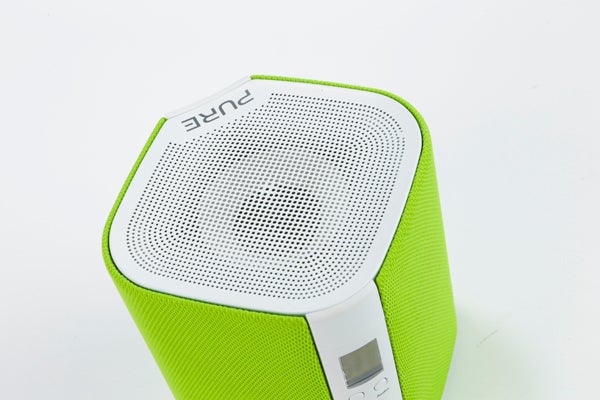 You have some control over the tweeters’ output too. On the Pure Jongo S3’s back is an Audio button and little LCD display – nearby the power socket and Aux input. Presses on the Audio button cycle between using the tweeters in full mono, stereo or just one stereo pair (leaving two tweeters dormant).

There’s also an outdoors mode that bolsters the mid-range to help the Jongo cope better with outdoors noise – although it can sound harsh when cranked up indoors.

How does the Pure Jongo S3 sound? It’s quite a departure from Pure’s house sound, which we’ve gotten to know over years of using Pure DAB radios. 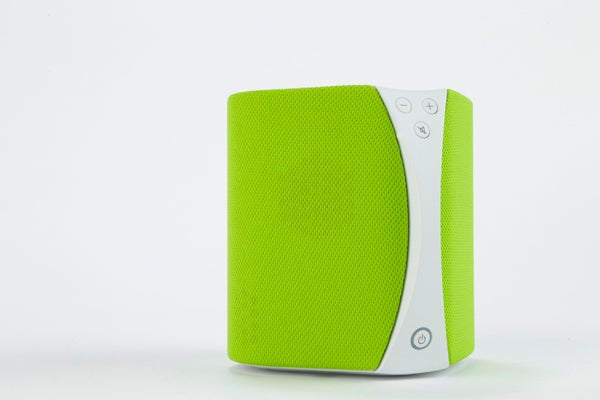 Rather than being warm and bassy like those sets, the Pure Jongo S3 is more delicate and detailed, without sounding too thin. That is what you get from using a quartet of tweeters and a bass driver.

At low volumes, the tone is impressive and satisfying, with greater fidelity than we expect from a speaker this size. If you want a dinky speaker to listen to streamed music on while cooking, the Jongo S3 is a class act. Thanks to its internal battery and small stature, it’s also right on the money for BBQs and picnics (although the grilles are vulnerable to damage and dirt). 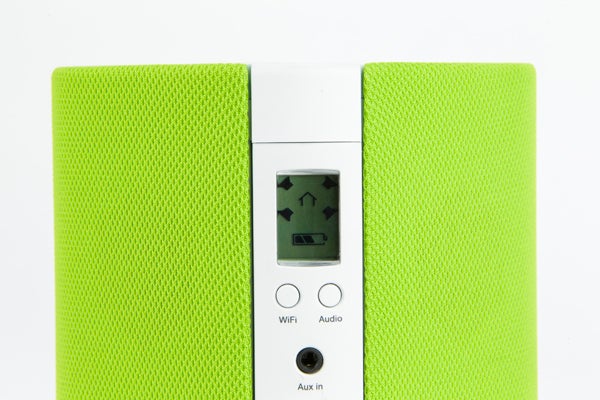 However, there are some issues. The mids sound constrained and while the bass is punchy, bass depth is limited at all volumes.  These are all symptoms of what we think of as “small speaker syndrome”, and they leave vocals sounding boxed-in and rob kick drums of the impact they’d make with a larger speaker enclosure. At high volumes, the mids can become strained too, giving the Jongo S3 sound a grating, hard edge.

In a sub-£100 wireless speaker, we wouldn’t feel the need to focus on these negatives. At that price it’d get seven thumbs up.

It is not small change, and we’re not yet convinced the inclusion of Wi-Fi and really merits pushing the Jongo into these big leagues when we found ourselves using Bluetooth most of the time anyway. We’ll have to wait to hear the Jongo S3’s bigger brother, the Jongo T6, to see if the Jongo system is really worth basing your home audio around.

The Pure Jongo S3 is a versatile wireless speaker that’s portable, and technologically advanced in some respects. It’s also cheaper than its self-appointed rival, the Sonos Play:3. However, the Pure infrastructure is not hugely attractive as it’s limited to Pure services and, setting wireless tech aside, we find the sound quality-to-price ratio hard to stomach. It sounds great for a small speaker, but it still sounds like a small speaker.