What is the Pure Evoke F4?

The days of the plain and simple DAB radios are numbered. The Pure Evoke F4 DAB/FM radio has all the functions and style of the company’s classic DAB Evoke range, but adds-in Bluetooth, Wi-Fi and multi-room capabilities.

At £180, it is not quite a bargain – the simpler Wi-Fi-enabled Evoke Flow is now available for under £100 – but this is one of the best small radios money can buy. If you can live with a few usability niggles, that is. 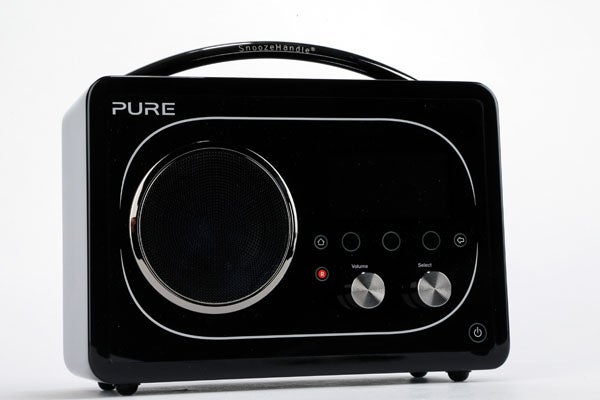 The Pure Evoke F4 looks almost identical to the Pure Evoke Flow, the first internet radio edition of the Evoke line-up – released back in 2008. It’s a starker, more macho look than the other wooded Evoke models. But its design has a classic quality that means the design has aged extremely well over the last five years.

Although it’s super-portable, with a metal carry handle up top, there’s a good weight to the 1.5kg Evoke F4 too. It feels like a high-quality little box, using immaculatel-finished glossy black lacquered wood rather than plastic. It’s among the classiest radios money can buy.

Unlike most of the non-internet-enabled Evoke radios, the Evoke F4 uses mostly touch sensitive buttons rather than the more old-fashioned clicky type.  These turn the box on and off and skip between menus, leaving just the most commonly-used features as more tactile knobs – the station selector and the volume knob. 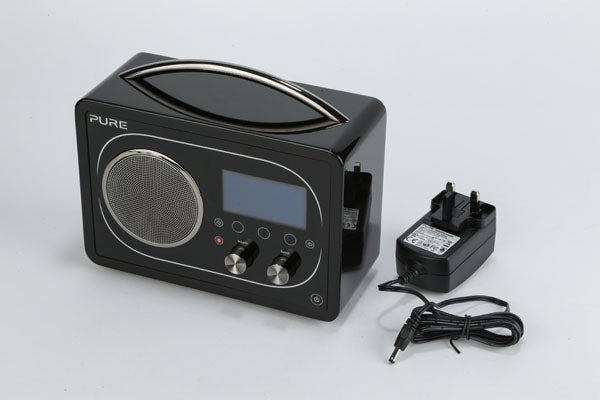 Capacitive buttons are a lot less easy to use ‘blind’ than traditional buttons, making the Evoke F4 a little harder to operate than some when in the half-awake state you’ll be in when using the F4 as an alarm clock.

And while there is some intelligent dimming of the screen, we found its lowest brightness still a little distracting at bed time, and some in-menu fiddling is needed to make the screen time out altogether after a period of inactivity.

A shade more finickety and attention-grabbing than some, it’s not quite a perfect bedside radio, then. But it remains one of the best because of a traditional Evoke-series feature – the snooze arm. This is the carry handle that doubles as a capacitive sensor to ‘hit snooze’ with a sleepy whack of an arm. 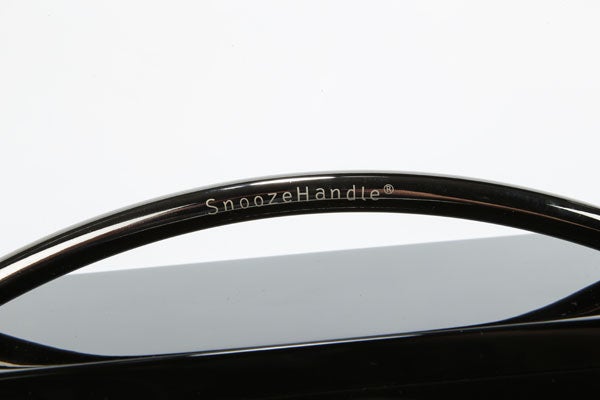 Snooze Handle… I think I love you

Comparing the old Evoke Flow and Evoke F4 reveals some of the radio’s new features. There’s now a record button, letting you save snippets of radio to a USB stick – a USB port sits on the back panel. There is scheduling of recordings, but it is a little awkward to use, and it’s not that attractive an option when on-demand content is easier to access. 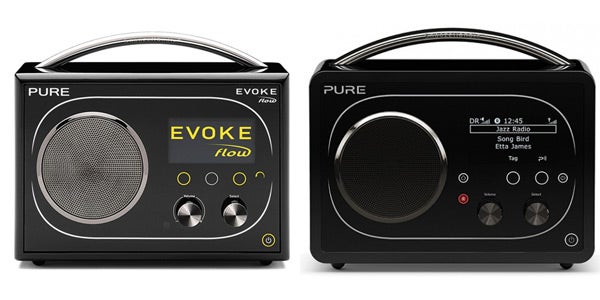 The display colour has also changed. Where the old Evoke Flow model had a yellow OLED screen, the Evoke F4 has a crisper white OLED display. It’s clear and bright – even a little too bright in some situations.

The rear of the F4 features an 3.5mm input, an output for an extra speaker and a removable plate that covers the battery compartment. You don’t get a battery pack for your £180, but you can buy the required proprietary one for around £30 – reasonable.

By far the most important new features of the Evoke F4 are ones that you won’t find on its surface, though. Its wireless credentials means it is ready to be enrolled into the Jongo family – Pure’s new low-cost multi-room audio speakers.

Hook the Evoke F4 up to your home Wi-Fi network and you can control the radio with Pure’s mobile app, send tunes to it from the Pure Music Spotify-a-like streaming service (£4.99 a month subscription) and even control the volume of other linked Jongo speakers.

It does all this with relative stealth – most onlookers would mistake it for a simple DAB radio. 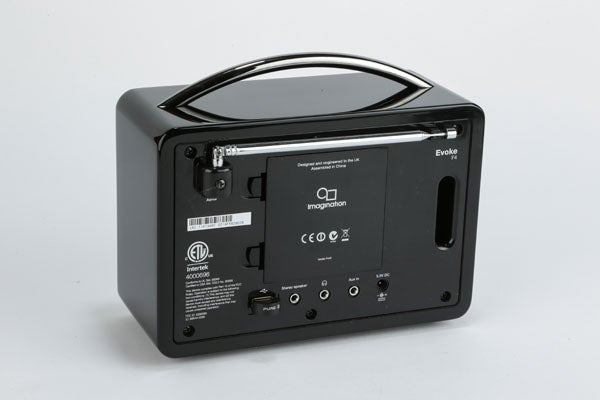 There are downsides to this approach. Navigating through the thousands of internet radio stations available to the Pure Evoke F4 on the radio itself is a pain, too slow to satisfy when tablets and phones have made us impatient of such faffing.

Pure’s Wi-Fi-based streaming tech is also proprietary. So while it lets you perform multi-room tricks on the (relative) cheap, you can’t stream from any old phone app – you can’t use Spotify over Wi-Fi, for example.

That’s why Pure has also equipped the Evoke F4 with Bluetooth. This relatively ‘dumb’ wireless connection will let you plug those gaps. Having to switch between Wi-Fi and Bluetooth feels slightly inelegant, though. As does supplying Bluetooth with a small USB dongle, rather than fitting it into the box itself. 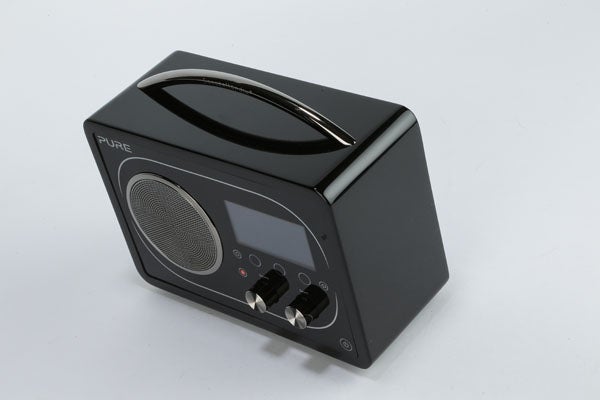 Most of Pure’s kitchen top-sized radios use 3-inch drivers. But this generation has been given a slight upgrade.

The Pure Evoke F4 has a 3.5-inch full-range driver, and the Pure sound has been tweaked a bit. Most of the Pure radios we’ve heard have had fairly warm, slightly soft sound that is very forgiving of the limitations of the DAB radio signal – many stations use very low-quality streams.

As a radio that’ll often be treated to higher quality source material, Pure has allowed the Evoke F4 a more critical sound. A Pure representative told us, the sound has been “further refined for the streaming generation with significantly increased detail retrieval, focus and resolution.”

It’s a well-balanced sound with much better treble than you get with most radios this size – notable including the still-popular, still-pricey (and still gorgeous) Roberts Revival RD60. However, as with any radio this size, the sound has its limits.

Its 3.5-inch driver can’t kick out tunes with real oomph at higher volumes, its sound is – obviously – mono and if you’re willing to forego all the tech that goes into the Evoke F4, you can get a much better-sounding speaker dock for less money. However, here you’re buying into the form as much as anything else. 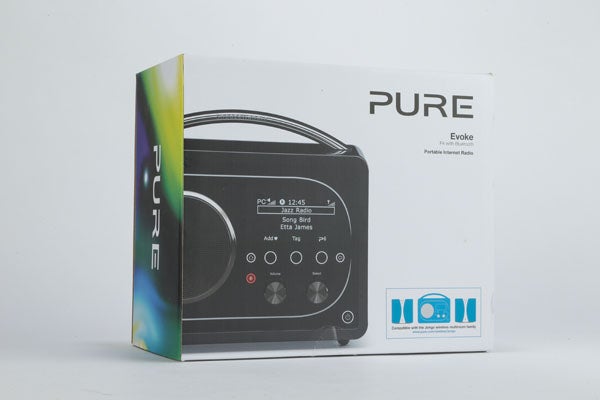 Should I Buy the Evoke F4?

The Pure Evoke F4 is a handy little radio in a wide variety of situations. In the kitchen or bedroom it excels as a box that skips between roles as a traditional DAB radio and as a more advanced casual-listening streaming speaker.

Pair it with a Pure battery pack and there are few more versatile audio gadgets out there.

However, it does feel a little expensive and not all of its wireless skills sit happily with its slightly old fashioned menu system. It is the most feature-complete Evoke radio to date, but make sure you need the additional features offered over the Evoke Flow, which costs up to £70 less.

The Pure Evoke F4 bears many of the benefits of the best Pure radios. It looks good, it feels good and it sounds good among its peers. However, it is quite expensive and its more advanced features are often a little tricky to use.