There’s a space between your personal MP3 player and your Hi-Fi system. It’s a space where there’s plenty of room for radios, iPod docks and DAB-enabled alarm clocks. This is where the Pure One Elite Series II lives, and it’s great at filling with sound those parts of your house where your main Hi-Fi isn’t.

Although it bears the Elite tag, the Pure One Elite Series II isn’t really a top-end model in Pure’s line-up, at least in feature and price terms. It doesn’t have internet radio, doesn’t use the high-end materials of an Evoke or Mio model and sells for well under a hundred pounds. However, the great thing about this model is that it has the dual-speaker setup of Pure’s top models, giving it full stereo sound. 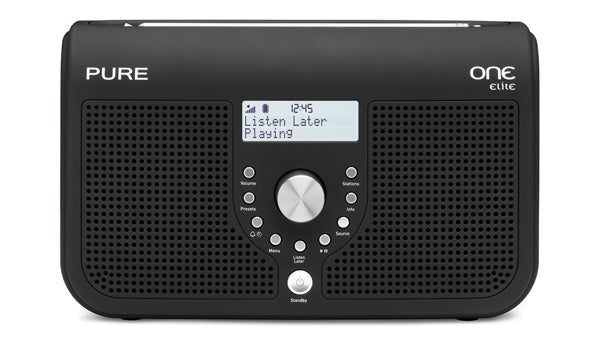 Like all the other Pure One models, the Elite Series II is made of plastic. It has a matt soft touch finish to stop it looking too cheap and tacky, but it’s functional rather than luxurious. There’s a hint of retro to its curves and giant speaker grills, and it’s a little more rounded than its dinky brother the One Classic Series II.

Other than the second speaker and the bigger bod, the Elite radio is very similar to the smaller Classic in its features and connectivity. It has two tuners, one DAB and one FM, an auxiliary input to let you plug in an MP3 player or smartphone, and can be powered by a battery rather than the supplied 12V adapter. 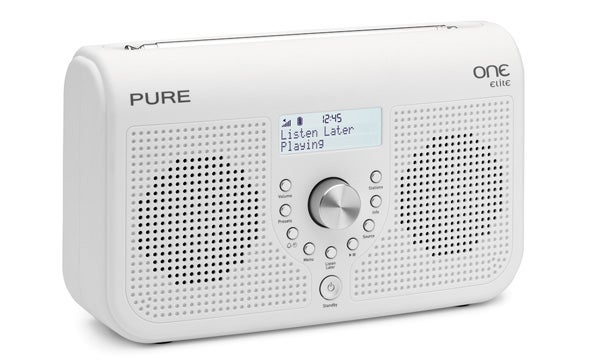 The One Elite Series II is also available in white

A significant chunk of the Elite Series II’s body is taken up by an empty battery compartment, covered by a hinged plastic flap on the back. The battery doesn’t come with the radio as standard, but splash out the £30 for a ChargePAK C6L battery and the unit’s versatility is boosted massively. Using this rechargeable pack, you’ll get a full day’s listening – perfect for picnics, BBQs and the like. Pity it’s November, eh? Alternatively, it also accepts C-size batteries, although you’ll need six of them to power the radio.

The Pure One Elite also has a 3.5mm headphone jack and a miniUSB slot. This won’t let you play MP3s from a USB stick or external hard drive, though. It’s there to let you update the firmware on the device down the line. These sockets, along with the auxiliary input, sit on the right edge of the radio, kept handily out of view when viewed front-on.

There’s a nice sense of symmetry to the design of the Elite Series II, the circle of central controls surrounded by the large speaker grills. To our eyes, it’s more attractive than the lower-cost offerings from Roberts, perhaps Pure’s biggest rivals in the UK. And oddly, the simple looks of the One series translate well to this larger size, where the Evoke range can look somewhat oversized in its larger iterations.

The Pure One Elite Series II isn’t a huge step up from its predecessor, the original Pure One Elite. It sports a very similar design and doesn’t make the leap into the world of connected radio, sticking with DAB and FM. This limits the amount of content available to you, but this isn’t necessarily a bad thing.

Not having thousands of radio stations to sift through makes the Elite very easy and quick to use, and also means that the 2-line monochrome display doesn’t feel too antiquated. It lets Pure give many of the radio’s main functions their own physical buttons.

The only regular need you’ll have for the menu system proper is to flick between radio stations – and as that involves simply turning the dial rather than laboriously typing-in names, as you sometimes have to on an internet connected radio, it’s no hardship. To simplify things further, the Elite offers up to 25 preset stations for each tuner (DAB and FM).

As with the previous generation, you can use the small amount of internal memory the Elite has to pause live radio – for up to 15 minutes, perfect for making a cuppa or a visit to the toilet. The one new feature that this second-generation model brings is Listen Later. This lets you record one programme to come back to later, predictably enough.

There’s no proper EPG-like function involved, though. You have to manually set the time, duration and station to record – distinctly retro. Only one recording can be held, so any subsequent recording will wipe off the previous one. What we found more restrictive was the recording limit. As there’s just a small amount of internal memory available on the radio, any decent-quality station will fill it up within 45 minutes.

If you merely want to record The Archers every day (which we imagine being a common usage), the Elite Series II can do it, no problem. But it can’t record a whole 3-hour DJ set, not nearly. Programming-in a recurring recording slot is easy enough, and you can set it to record daily or once every week, but this limit makes it pretty useless for recording on a music station where programmes tend to last two or three hours rather than a half-hour.

Few portable DAB radios offer a decent recording function, but it’s not beasue of a technological development barrier – one of the best was the Pure Evoke-3, and that was released way back in 2008.

The Pure Evoke Elite Series II only falls down on these more advanced elements – it has the basics covered. And yes, there is of course an alarm feature.

The Listen Later function of the Pure Elite Series II is being marketed as a big deal because it’s the newest arrival within the range. But the real reason to buy this unit is that, unlike the majority of Pure DAB radios, it has two speaker units rather than one.

The second 3in speaker cone naturally allows the radio to play proper 2-channel stereo, but it also has a huge effect on sound quality. This box is much louder and much more powerful than its smaller cousin, the One Classic Series II.

Pure’s single-driver radios sound pretty good considering all of their mojo is pumped out through a single 3in cone, but they still sound distinctly small. In comparison, the Elite sounds huge – more like the sound scale you’d expect from a mini system than what this still effectively is, a kitchentop radio. 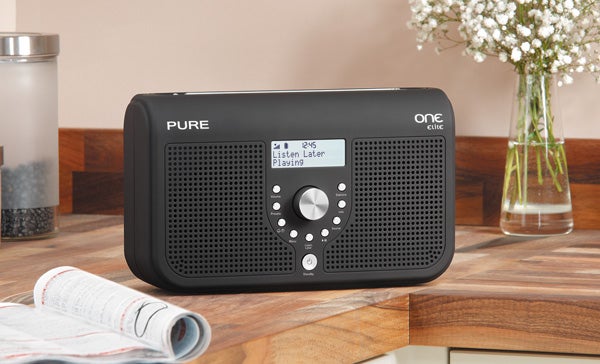 The sound signature is classic Pure – it’s warm, bassy and forgiving of the limitations of the DAB signal. As many DAB radio stations are broadcast at appalling quality, digital artefacts are often clearly audible, especially when listening to music, as opposed to spoken-word programmes. This isn’t down to the quality of reception, but the quality stations are broadcast at – so there’s no getting around it.

Stick to higher-quality stations like the BBCs (even these are broadcast at a depressingly low 128kbps) and the Elite Series II sounds pretty great. It’s powerful, loud and bassy. There are basic customisable settings for the bass and treble too, useful if you find the bassy sound signature a little too warm.

If you have the extra room the Elite demands, and don’t mind the £20 premium it commands over the Classic, this is well worth the upgrade. Bigger, louder and more satisfying than the dinky mono radios in Pure’s various ranges, it’s one of the best-sounding portable DAB radios money can buy.

That £20 premium could also get you a different kind of upgrade, though – to the Pure One Flow. The Flow offers oodles more features, including thousands of online stations, podcasts, music streaming from your computer and – in time – Pure’s own music streaming service. It’s a lot to lose out on, but if all you’re after is a simple unit to play UK radio stations on, we think the sound quality upgrade is a worthy alternative.

The Pure One Elite Series II is not a cutting edge radio. It doesn’t offer connected features, won’t give you access to Pure’s upcoming music streaming service, and the recording feature is very basic. What it does bring is supreme ease of use, cracking sound quality and plenty of portable potential. If you care more about sound than having thousands of hours of content on tap, this is one of the very best sub-£100 radios.