Pokémon: Let’s Go, Pikachu and Let’s Go, Eevee are a great duo of titles that blend the iconic pocket monster RPG with ample innovations from its mobile counterpart.

Pokémon GO is a global phenomenon. Niantic’s vision of the pocket monsters on mobile finally allowed us to live out trainer fantasies once locked behind childhood dreams. Stumbling across a Pikachu in the local car park was oddly magical, the appeal of which is proven by millions of players who continue to engage with it years after its release.

The impact is undeniable, and now this influence has burrowed into the core series with Pokémon: Let’s Go, Pikachu and Let’s Go, Eevee. Hallmarks of the mobile hit have been spliced with the original RPG as a way of morphing newcomers into converts of the beloved, long-running series.

And, it just might work. What is essentially a remake of Pokémon Red, Blue and Yellow is revitalised with some brave mechanical innovations that do away with series staples while remaining true to the core formula.

Very little has been dumbed down in the process, and franchise veterans needn’t worry about the removal of features once thought integral to the experience. Pokémon GO is far from a detriment here, instead adding something meaningful to nearly everything you do. 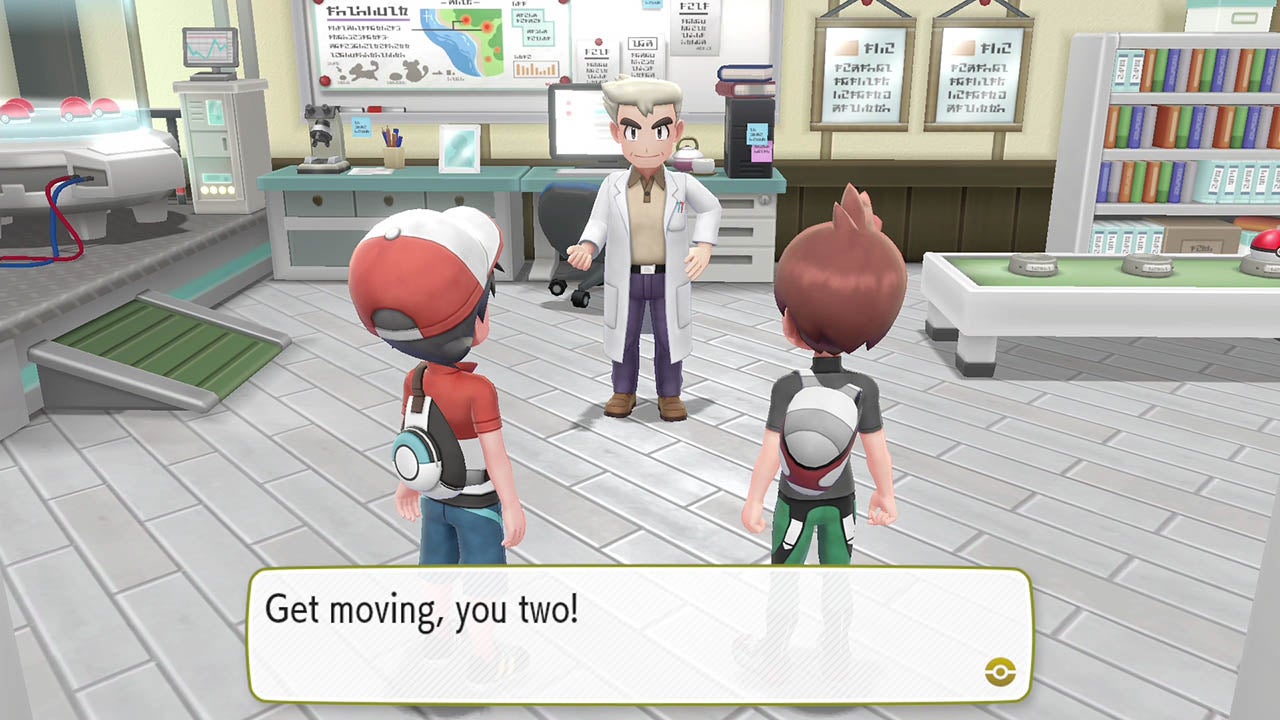 Pallet Town is an old haunt to Pokémon fans at this point, and it’s where things begin in Pokémon: Let’s Go.

You’re the new kid on the polygonal block, and within minutes you stumble across Professor Oak and your friendly neighborhood rival before picking between two potential starter Pokémon. Depending on the version of the game you’re playing, this will be Pikachu or Eevee.

I went for the latter, and will happily die on the hill of Eevee after spending dozens of hours with the absurdly adorable fella. Seriously, Pokémon: Let’s Go is so cute it should be illegal. After bonding with your starter Pokémon, Let’s Go is a routine entry in the RPG series with regards to structural pacing.

You’ll travel the Kanto region in pursuit of defeating gym leaders, eventually puncturing the Pokémon League. It’s a tried-and-true adventure that’s been engineered for a new generation of players, yet it never forgets about where it all began. 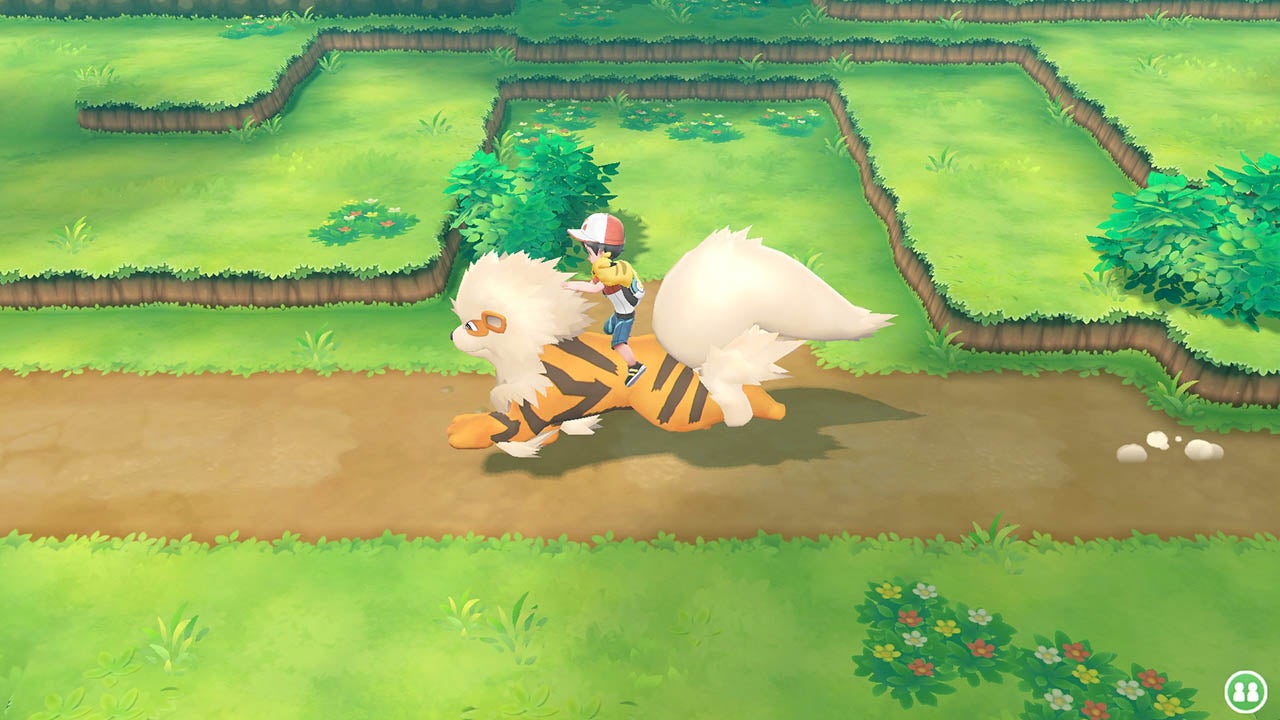 The biggest and, arguably, most polarizing change is the removal of random encounters. Wandering through caves or finding yourself knee-deep in the tall grass will no longer lead to Pokémon getting the jump on you. Instead, creatures will spawn randomly in the aforementioned locations, happy for you to approach them (or vice versa) to engage in a catch encounter.

This is where the biggest inspiration from Pokémon GO surfaces. The act of catching is exactly  as it is in the mobile release, mimicking the circular reticule surrounding Pokémon as you rhythmically hurl balls at them. If successful, they’ll join your party or be stuffed into the Pokémon Box. Unused, they can be sent back to Professor Oak in exchange for candies, which when used now act as permanent stat boosts to Pokémon.

You can even feed Pokémon fruit to make catching easier, adding a light layer of strategy to something that, while simplistic, remained engaging throughout the entire journey. In fact, I’d argue they’re far superior to wild battles. You choose to initiate encounters, and catching countless Pokémon is almost therapeutic as you grind for experience points before taking on a challenging gym battle.

The methods of throwing Pokéballs are also unexpectedly varied. You can use touch controls, face buttons or opt for motion controls with the Joy-Con or Poké Ball Plus, the latter a new peripheral available alongside Pokémon: Let’s Go.

Coming in at £49.99, it’s a spherical controller inspired by the balls you’ll be constantly flinging around. I love it, having played the majority of Let’s Go, Eevee with it in my hands. 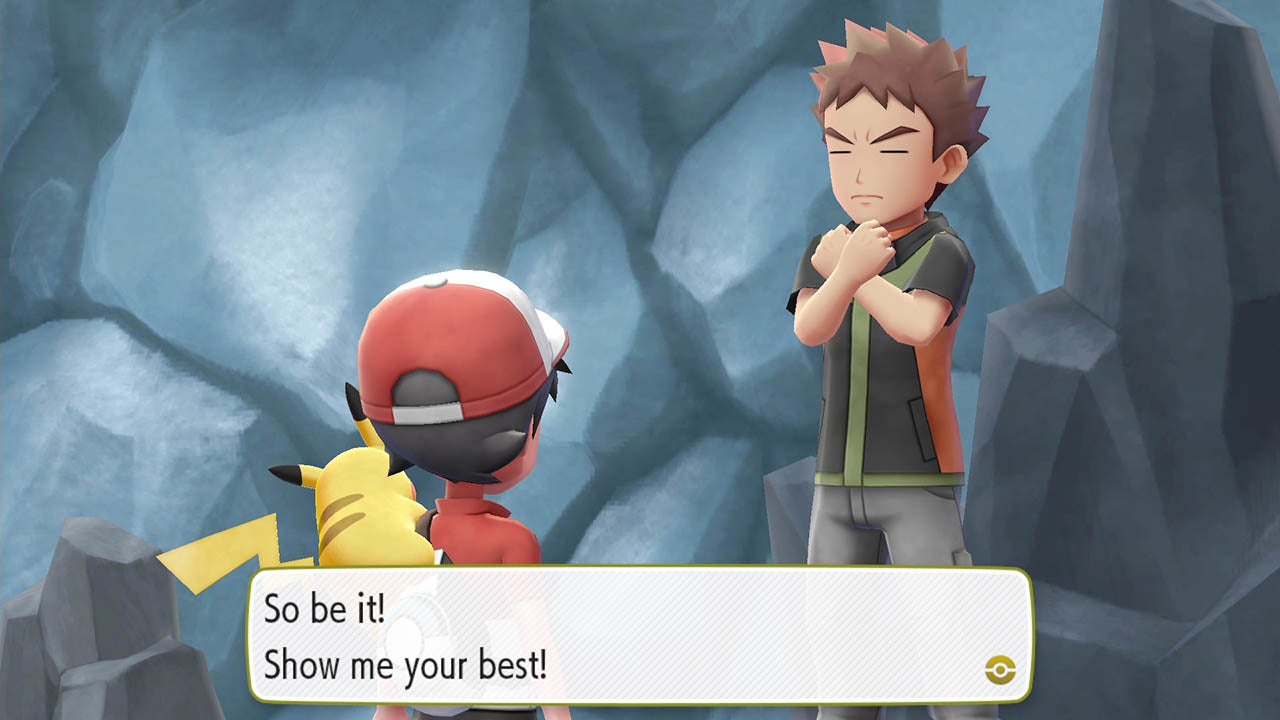 Aside from the new catching mechanics, this is the Pokémon RPG we’ve come to expect from the past two decades, albeit with a few welcome twists and turns along the way. The turn-based battle system is nothing new – and, arguably, a little stale at this point. It’s easy to fall victim to repetition in some areas, as you grind through an endless gauntlet of trainers.

Lavender Town’s Pokémon Tower is especially guilty of this. I must have spent the best part of an hour dispatching Ghastly and Haunter combos using the same tired combination of moves. I wanted the string of battles to be over after a certain point, far more interested in exploring this new vision of Kanto instead of fighting through systems with which I’m far too familiar.

However, it’s important to consider the audience Nintendo is aiming for here. Players who have only had experience with Pokémon GO, and remain strangers to the core series, will likely appreciate the simplicity on display here. Despite this, to a veteran of the Pokémon world, it’s undeniably mundane, although levelling up your party and seeing them evolve remains a wonderful reason to see things through.

It’s perfectly serviceable but lacks the innovation found elsewhere. Fortunately, the connection I had with Eevee helped circumvent a lot of these archaic frustrations. To put it simply, we’re best friends forever.

Your partner Pokémon is always riding atop your head, looking both fly and adorable as you explore the sprawling fields of Kanto. At any moment, with a press of the Y button, they’ll pop onto the screen, waiting to be showered with attention. 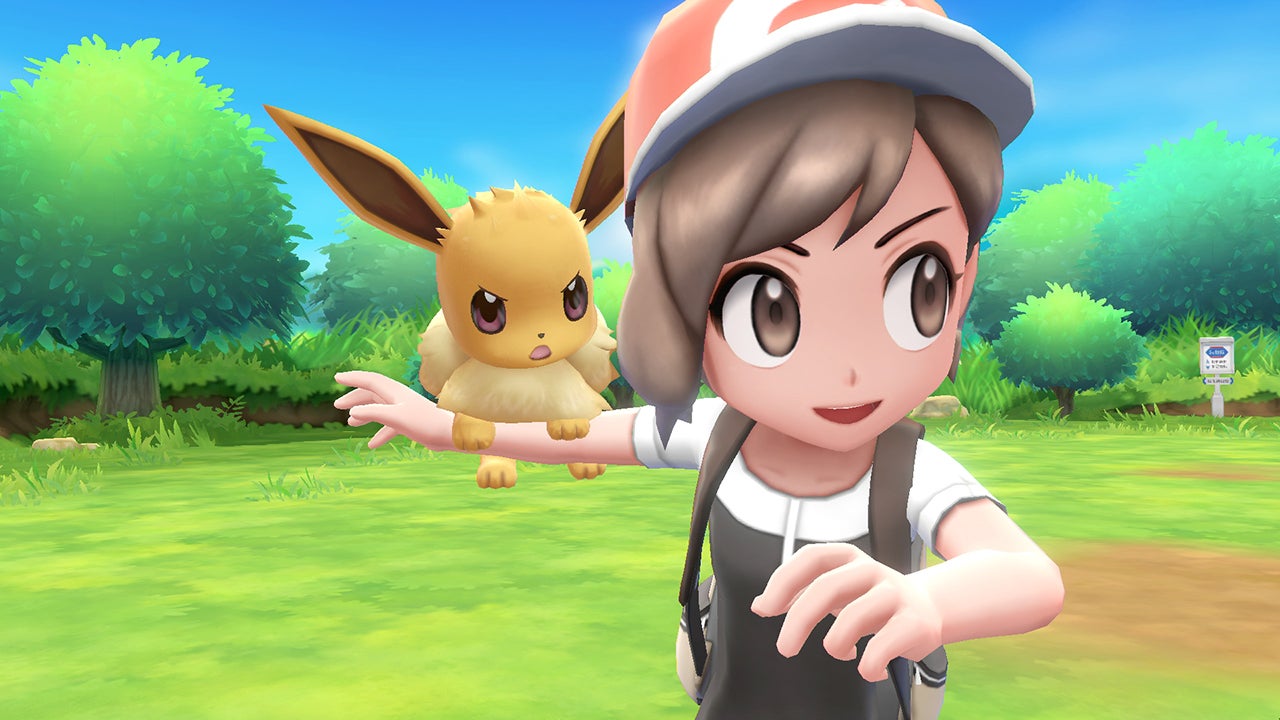 Rewarding Eevee with countless headpats and tail pokes isn’t just an adorable side activity. It has noticeable repercussions during a battle that makes things much easier. One example comes with status effects, such as poison or paralysis.

At times, Eevee will power through the pain so they won’t worry you, or avoid attacks because you’ve warned them ahead of time. It’s cute and clever, giving your relationship substance beyond mere artificiality.

Nearly every Pokémon in your party can accompany you when exploring Kanto, each coming with their own animations and oftentimes hilarious riding stance. Snorlax is an obvious highlight, as you and Eevee cling clumsily to their belly while rushing through town.

I have to mention the delightful customisation options for you and your partner. You’ll stumble upon countless outfits and accessories that you can equip yourself with for maximum fashion points. Glasses, ribbons, haircuts, backpacks and more. You name it, and Pokémon: Let’s Go might just have it.

Pokémon: Let’s Go has found an aesthetic that really shines on Nintendo Switch, bringing the region of Kanto to life like nothing before it. Players riddled with nostalgia might be turned off with how it depicts locations such as Lavender Town – which, unfortunately, has lost the melancholic spookiness that pervades it in the Game Boy original. 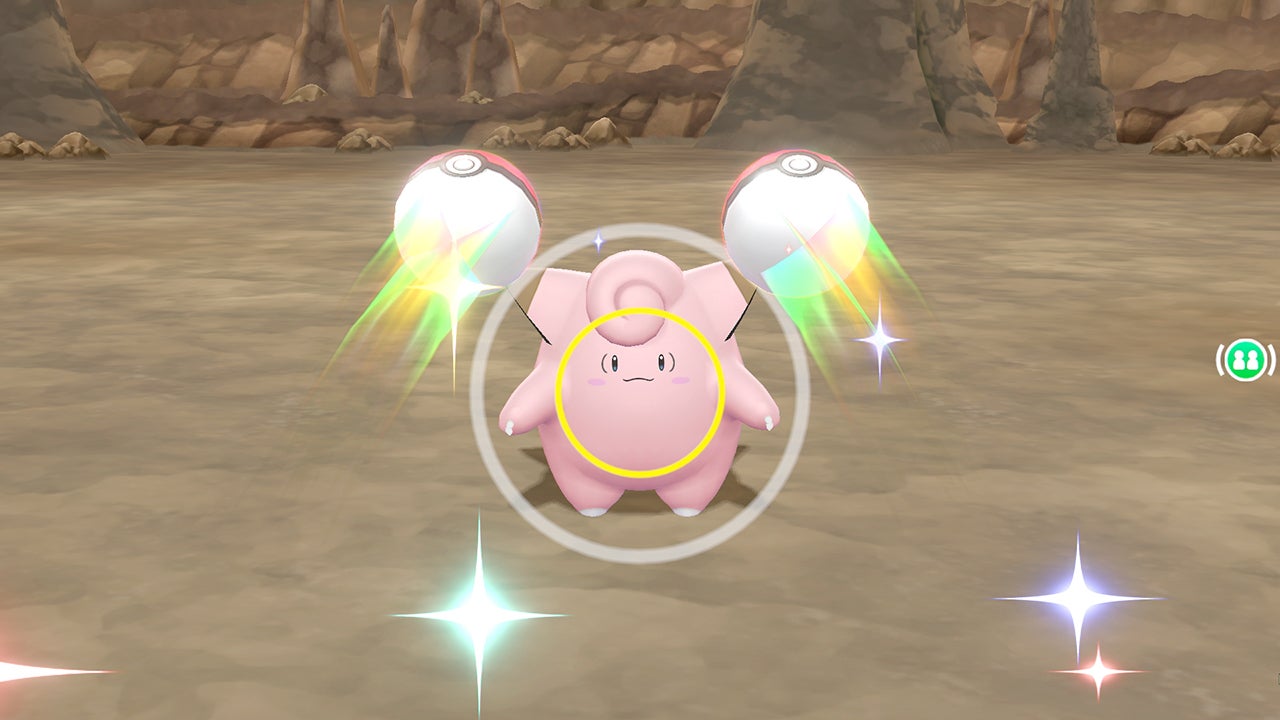 Those who have been dedicating a lot of time to Pokémon GO will find plenty to love in Let’s Go, mainly because you’re able to transfer all of your First Generation Pokémon after reaching a certain point in the narrative. So, if you’re having trouble catching or tracking something down, there’s an easy alternative. You’ll also need to trade with friends to bag exclusive critters from each version.

Let’s Go still provides a suitable challenge in the later hours, although steps have definitely been taken to make it more accessible. Moves such as Cut and Flash are no longer tedious to obtain, instead discovered naturally and assigned to Eevee or Pikachu. This supersedes a bit of tedium while providing greater freedom with how your party is formed.

A friend can be summoned at any time by shaking the Joy-Con, bringing a second Pokémon into the fray, giving you the upper hand in both battles and while catching wild Pokémon. Of course, this is fully optional but feels like a welcome evolution of the formula – instead of dumbing down the difficulty in favour of new players.

Pokémon: Let’s Go, Eevee and Let’s Go, Pikachu are a great duo of titles that blend the iconic pocket monster RPG with ample innovations from its mobile counterpart.

Game Freak has pulled a Hannah Montana and found the best of both worlds here, solidifiying an experience that embraces newcomers without forgetting the hardcore that will be itching to dive in.

Acting as what is essentially a remake of Pokémon Red, Blue and Yellow prevents this from being truly groundbreaking, but the foundations established here spell an exciting future for Pokémon on Switch.