Pebble has just confirmed that it has been acquired by Fitbit and will no longer be making its own hardware. Fitbit has acquired Pebble predominantly for its software team. It’s the end of Pebble as we know it, with the company stating that it could “no longer operate as an independent entity”.

What does the acquisition mean for existing Pebble smartwatches? Pebble has stated: “functionality or service quality may be reduced down the road”. What this means exactly we can’t be sure but this is worth keeping in mind if you do decide to pick up a Pebble Time Round at this point.

Our original Pebble Time Round review continues below.

What is the Pebble Time Round?

Rather than resembling a free toy you may find in a Happy Meal box, the Time Round is just about the most “watch-like” wearable I’ve ever worn. But to achieve this, Pebble has somewhat lost what made it attractive to lots of people in the first place. It no longer lasts a week – it barely runs for a couple of days – and it won’t survive if you use it in the pool.

I’ve worn a number of smartwatches, and I can happily say that with the Pebble Time Round I don’t feel like I’m actually wearing a smartwatch. In fact, it’s almost more conspicuous than some regular watches I own.

This isn’t because of any clever ergonomics – the body of the face isn’t even curved, it’s flat – but simply due to the Pebble Time Round being so small, thin and light; it weighs a mere 28g. 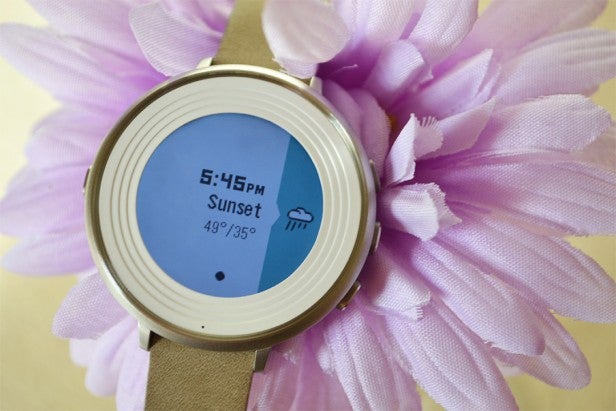 It feels good when worn. The face is metal, covered in glass, while the strap – on my review sample anyway – is a soft leather that feels much nicer to the touch than competing bands. I’ve noticed that it creases very easily, however, and wear around the corners and sides has happened quickly during my time with it. If leather isn’t for you then there’s a mesh metal band available, too, which bares a strong resemblance to a Milanese Loop.

My review sample is the smaller of the two options available – in terms of the size of the strap; not the size of the watch face. You can choose between 14mm and 20mm, with the difference mainly being a visual one. My preference is for the wider one, but those with daintier wrists may think differently.

Like every other model in the Time series, four buttons sit across the body of the Round. Three on the left for navigation and one on the right for briefly lighting up the display. Being metal, they’re far clickier and nicer to press than those on the regular Time, plus there’s more space between them too.

The Pebble Time Round is easily the best wearable the company has brought to market, not only in terms of looks but right down to the materials used and the well-engineered body.

Related: IP ratings explained – How waterproof is your tech? 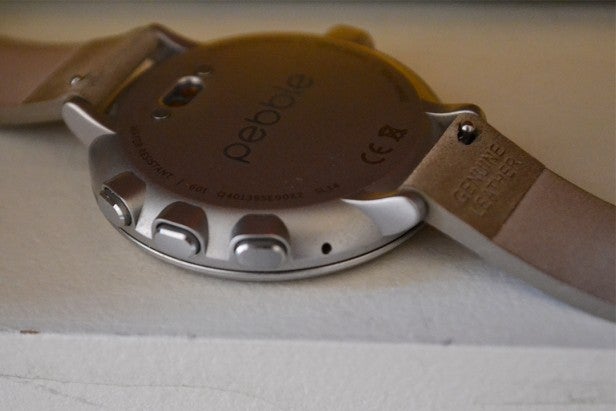 It’s not perfect, however. This smartwatch has a notable bezel. The circular portion sitting around the display is positively gargantuan, and it’s something of an eyesore on an otherwise sleek design.

Moving to such a design has also meant ditching one of the brand’s headline features; that water-resistance rating. While older Pebble watches could withstand a dip in the pool, the Time Round only holds an IPX7 rating – the same as the Apple Watch – so while it’s good for a quick shower or washing your hands, you should take it off before your morning lengths of the pool.

Tucked inside that large bezel is a rather tiny, fully circular display. It uses the same tech as the other watches in the Time series, but measures a single inch.

It sounds small, and it really is. I constantly have to squint and lean in to view what’s on the screen, and if I choose anything other than a blocky, digital watch face then I can barely read the time. The diminutive size does have its benefits though, like ensuring passers by don’t see all your messages whenever your watch goes off. This may appear an odd issue, but it really is noticeable with competing devices.

Like other Pebble watches, it uses an e-paper display (not to be confused with E Ink on the Kindle screen) and there’s a backlight too. The backlight activates with a flick of your wrist, but the brightness has to be changed manually – and it’s a lengthy process. On numerous occasions I was awoken at night because I’d accidentally moved my wrist and the whole watch would light up. 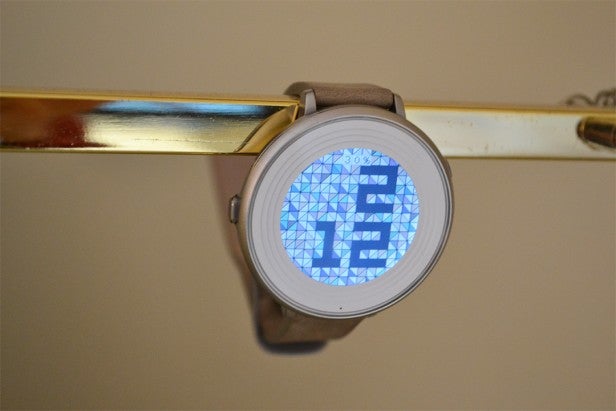 The display is of a lower resolution than other smartwatches too, but this isn’t much of an issue thanks to Pebble’s blocky, 8-bit-styled software. You won’t be looking at pictures or videos on this screen – but that’s far from the point anyway.

Covering the display is Gorilla Glass, which in theory should protect it from picking up scratches. It doesn’t do a particularly good job. I’ve used many smartwatches over the past two years and the Pebble Time Round is the first device that I’ve managed to scratch in normal day-to-day use. The screen seems very delicate, which isn’t ideal for a device that will be worn daily.

On a positive note, I am a fan of the always-on screen, which remains on whether you’re looking at it or not. This is thanks to low-power e-paper tech, and it makes the Pebble Time Round feel much like a proper watch, rather than a computer sitting on your wrist.

Pebble arguably made bigger strides in software than design when it first launched its Time series, moving to something it calls “Timeline”.

It’s a great idea; laying out your daily schedule intertwined with material from apps, weather updates and handy titbits of information. If you have the Yelp app installed, for instance, it will give you a buzz at lunchtime and suggest places near you to eat. Sports fan? It will add your favourite teams to the calendar so you can see exactly when they’re playing. 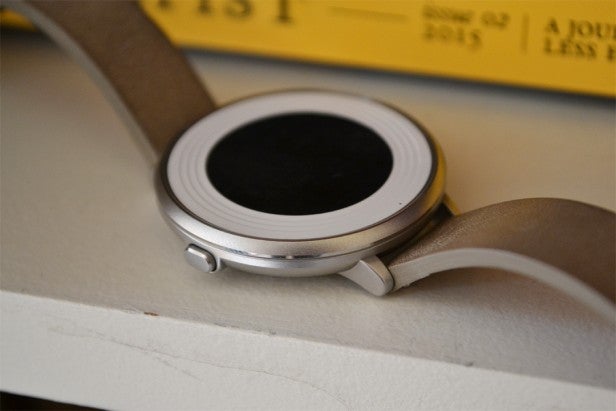 You scroll through your Timeline with the up and down buttons on the side of the watch, and the overall experience is smooth. I do wish Pebble would tone down its childish, yet initially cute, animations that make the watch seem slower than it is, though.

Time OS, just like watchOS and Android Wear, is still far from complete. The app support is dreadful and doesn’t seem to have improved much since I reviewed the Time in 2015. It means that your Timeline with mostly be filled with calendar events rather than the collection of actionable information that I assume Pebble intended.

There are a limited number of watch faces pre-installed, but a fairly hefty selection of both genuinely good-looking and novelty (hello Mario knock-off) ones are available from the Pebble Store.

Voice commands and message dictation is present, with the tiny microphone on the watch doing a surprisingly decent job of accurately picking up what I say. It’s far more limited than Google’s solution on Android Wear – you can’t ask general questions, for instance – but it still works easily for responding to text message.

What the Time does really well are notifications. They pop in and out, and you can scroll through and dismiss individual messages without taking out your phone. This is the bread and butter for a smartwatch, and the Pebble Time Round does it well. 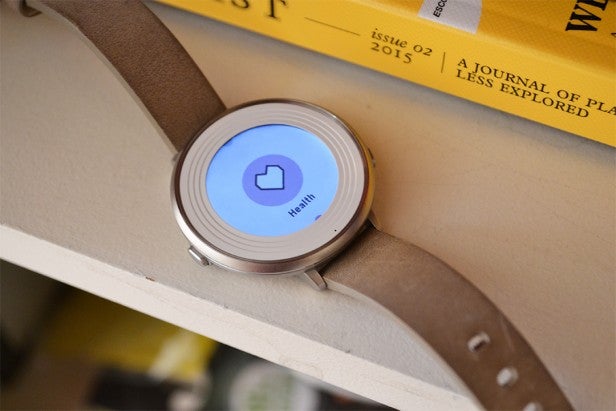 Pebble isn’t aiming to wrestle away any of the fitness market from Fitbit. As a result, there’s no GPS or heart-rate monitor – although both are a possibility if a third-party developed a capable smartstrap – and Pebble’s Health app is only a very basic way to track your steps and sleep.

Step tracking is accurate though, giving me about the same result as both an Apple Watch and Android Wear device, but it won’t let you dive down into your results or offer ways to improve.

Support for both iOS and Android remains – sorry to those 12 or so people who picked up a Windows 10 phone, but you’re out of luck.

Another once-standout feature of the Pebble series, the Time Round severely disappoints in terms of battery life. The original Pebble would last a week and the Time outdid even that, but the Time Round falls very, very short.

Throughout my time wearing the Round, it’s failed to last beyond two days. It will last from one morning until about midnight the following day, and then it goes into a sleep mode, where it doesn’t display anything but the time for around five hours.

You’re probably thinking that two days worth of battery life is the norm for a smartwatch at present? It’s about as long as the Apple Watch can last for, and the same goes for the Huawei Watch and Samsung’s Gear S2. But, each of those watches have bright displays, numerous features and are, overall, far more powerful than the dinky Time Round. Pebble has had to make a number of sacrifices to ensure the Time Round is as thin as it can be, but the lack of a decent battery really irks me.

It also uses the same annoying magnetic charging cable that clasps to the bottom of the watch. It seems an ungainly solution when competitors are bundling devices with nice-looking wireless docks. It also means that if you forget your cable, you’re out of luck; although replacements aren’t overly pricey – around £5, on Amazon. 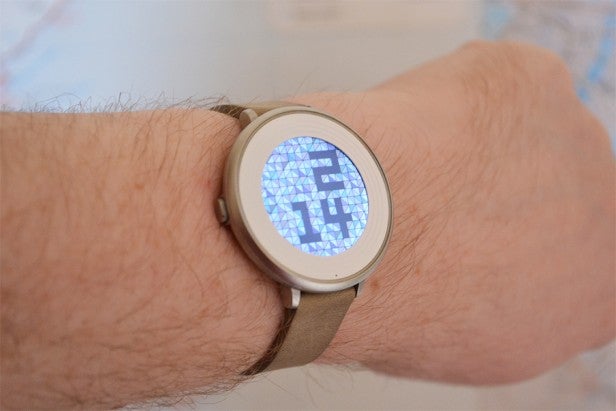 Should I buy the Pebble Time Round?

While it’s far from perfect, I do think the Time Round will appeal to quite a few people. If you want a simple smartwatch that’s great for notifications and, well, telling the time all the time while looking good, then the Time Round is a stellar option.

I still feel that Pebble has lost that spark that made it so different in the first place, though. The battery life is poor and it doesn’t have the level of  water-resistance offered on previous watches – both features that the start-up built its success on in the first place. It also lacks the rugged nature of past models.

The Pebble Time Round is pricey too. Even when considering recent reductions. With a starting price of £199, it’s only £60 cheaper than the far more functional Apple Watch and £30 cheaper than the great all-round Android Wear-toting Moto 360. There’s the Fitbit Blaze out now too, which offers far more fitness features along with notifications for £159.99.

It looks the business, but the Pebble Time Round misses the mark in a number of important areas.