Pebble has confirmed that it is being acquired by tech giant Fitbit in a buyout that will shake up the wearables industry for years to come.

Pebble revealed the news in an update to its Kickstarter page, describing the acquisition as “bittersweet”, adding that it would “miss what we’re leaving behind”. In a statement, Pebble said: “Fitbit has agreed to acquire key Pebble assets. Due to various factors, Pebble can no longer operate as an independent entity, and we have made the tough decision to shut down the company. The deal finalised today preserves as much of Pebble as possible.”

It continued: “. Much of our team and resources will join Fitbit to deliver new ‘moments of awesome’ in future Fitbit products, developer tools, and experiences. As our transition progresses, we’ll have exciting new stories to tell and milestones to celebrate.”

Pebble shot to online fame in 2012 after it raised $10.3 million through a Kickstarter campaign for the Pebble Classic smartwatch. The company began selling the watches in July the next year, and sold out within five days. By the end of 2014, Pebble had managed to sell one million smartwatches, and went on to break Kickstarter’s crowdfunding record in 2015, raising $20.3 million for the Pebble Time and Time Steel.

Fitbit, meanwhile, is a well-known fitness tracker company that’s been operating since way back in 2007. The company became publicly traded last year, but saw its stock value slump by 50% in 2016, causing CEO James Park to announce that Fitbit would transform from a “consumer electronics company” to a “digital healthcare company”. Today’s Pebble acquisition may be the first major step towards that goal. 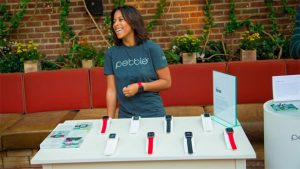 Unfortunately, it’s hard luck for Pebble owners, as it seems devices won’t be supported indefinitely. According to Pebble, device “functionality or service quality may be reduced down the road”. Pebble also suggested that it wouldn’t be releasing regular software updates or new features, and that Pebble’s reliance on cloud services would be reduced.

But the bad news doesn’t stop there: Pebble also confirmed that one-to-one Pebble support is no longer available, and that any Pebble currently “out in the wild” is no longer covered by (or eligible for) warranty exchange. If you’ve got a problem, the Pebble team recommends heading to Reddit or the Pebble forum – that’s cold. You also can’t return or exchange your Pebble if you’ve changed your mind about your purchase after buying one online, but you may able to return your device if you bought it in-store.

Pebble attempted to assuage customer concerns by confirming that backers will be refunded for any unfulfilled rewards. This affects backers of the Pebble 2, Time 2, and Pebble Core, all of which had crowdfunding campaigns that had yet to be fulfilled: “We’ve since shipped every Pebble 2 possible, but can’t say the same for the remaining rewards. Pebble Time 2, Pebble Core, and Pebble Time Round Kickstarter Editions will not go into final production.”

The eligible pledges will be refunded by March 2017, which is a fair way off for newly forlorn Pebble backers, many of whom will have been surprised by the acquisition. If you’ve received your Pebble 2 however, you won’t be eligible for a refund. And if you’ve ordered add-on Pebble devices to your Pledge Portal after the campaign closed, you may have seen a temporary authorisation charge – this will be reversed automatically within “a few days”. 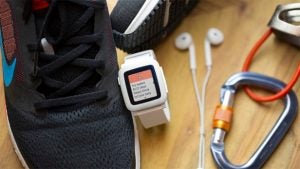 If you’re due a refund, it will be automatically issued to the card you used to place the pledge. That could be a problem if you’ve changed cards, so you’ll need to contact your bank (or whoever issued the card) to get your money back.

Interestingly, if you’re a backer from outside the United States, you’ll receive refunds equal to the to the value of dollar at current exchange rates – no adjustments will be made between the original payment and the upcoming payment. That could work to the benefit of UK buyers, for example, as the value of the pound has fallen significantly over the last six months. So if you backed a Pebble device when the pound was stronger, it should work out that the refund will be higher than the amount you paid.

Here’s what Richard Easton, Wearables Editor at TrustedReviews, had to say: “.  It makes a lot of sense to pick up Pebble’s software team as Fitbit’s already had a rather ropey start to trying to incorporate smartwatch functionality into its fitness trackers. The Blaze was one such device and there was definitely a lot of room for improvement. It’s certainly a company more associated with fitness trackers than smartwatches.”

“Personally, I’m a little sad to see Pebble as a hardware company go and I was particularly looking forward to the Core as a new product category for the company. In the end,  I can’t help but feel the company must be kicking itself not to have given more thought to some of its other suitors over the years,” he added.

It’s not yet clear how long the merger will take.

What do you think of Fitbit’s Pebble acquisition? Let us know in the comments.