What is the Samsung Gear S2?

Samsung’s back catalogue of smartwatches has been, to put it mildly, poor. The vast array of Gear-branded wearables have been bulky, ugly and running an operating system devoid of killer features and decent apps.

The Gear S2 hopes to change this. I’m happy to report that in pretty much every area it achieves this. The Gear S2, with its circular display, is the first in the series that actually looks good. Instead of simply following the crowd, Samsung’s headline rotating bezel results in a smartwatch that’s the easiest to navigate yet.

However, by failing to opt for the constantly improving Android Wear OS, and instead choosing to stick with Tizen, Samsung’s Gear S2 feels hamstrung in many areas.

Smartwatch manufacturers are no longer happy to make only a single model, instead churning out multiple varieties at varying prices. Apple started the trend, and Samsung has continued it. 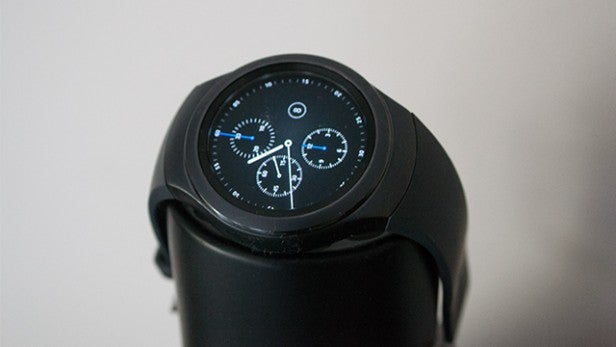 The Gear S2 is available in three versions: the standard, more sporty model that I’m using, and a slightly classier one called the Gear S2 Classic; a 3G enabled smartwatch will arrive later.

I can’t comment on the pricier Classic (£299), but the standard model (£249) looks and feels superb. It isn’t in the same league as Huawei’s Watch, but it’s one of the better smartwatches on the market.

The circular display is surrounded by a metal bezel, with two clicky buttons. There’s one for jumping back a step and another for heading to the homescreen. Both buttons sit on either side of a microphone on one side of the smartwatch. The Gear 2 isn’t overly thick either, sitting only 11.3mm off my wrist. 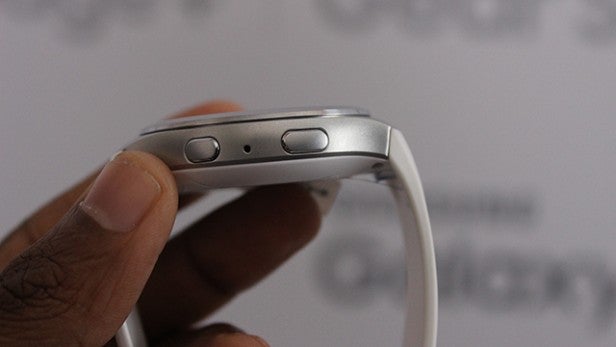 While the Classic model has a standard 22mm watch strap, this version uses a proprietary connection, so it’s unlikely that you’ll be able to swap out the rubber strap for one your own.

I like the strap, and it fits in with the more sporty look of the watch. It doesn’t become overly hot and sweaty during extended workouts and it’s comfortable enough to wear for extended periods. Unfortunately, it isn’t particularly durable: mine has already picked up a small tear.

The overall look of the Gear 2 is certainly more fitness watch than one you’d match with a suit, but this isn’t necessarily a bad thing. 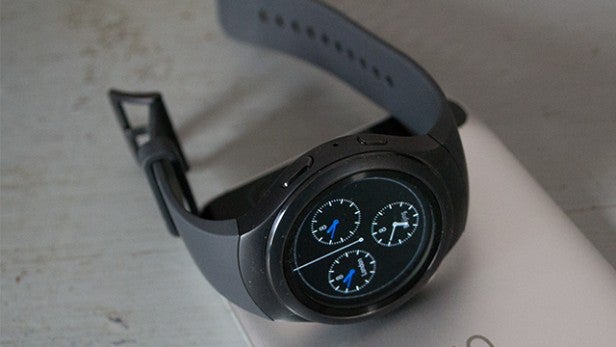 The most notable design feature on the Samsung Gear 2, however, is the rotating bezel. This is the main method by which you navigate the Tizen OS, and in my opinion it’s truly fantastic – it’s easily the best way I’ve found so far to jump around menus on a wearable.

It turns smoothly as you twist it around, providing a satisfying click instead of just spinning endlessly.

Both Apple with its Digital Crown and Android Wear makers with their touchscreen-lead approach should take note.

It isn’t perfect, though. You can’t press down on the bezel to select an item – even though naturally it really feels like you should be able too – so you still have to use the touchscreen for that.

Samsung’s smartphone panels are the best in the business, so it shouldn’t really be a surprise to find that the AMOLED display used here is probably the best on a smartwatch to date. 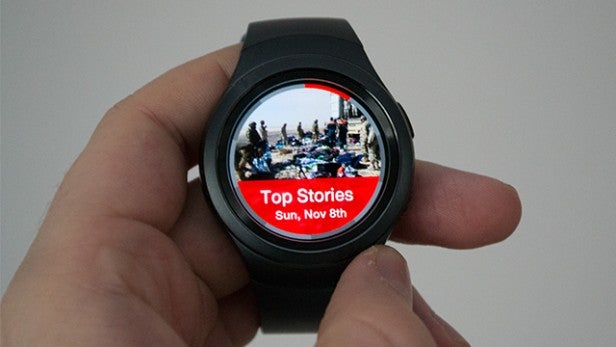 It’s 1.2-inches in size, with a 360 x 360 resolution that makes it hard to pick out individual pixels unless you get up really close.

Colours are rich and vivid, while the black backgrounds are inky and blend nicely into the bezel. Viewing angles are great too, but outdoor visibility could be better.

Being an AMOLED panel, it can be put into an ambient mode. This means it will continue to  display the time and only burst into life when you flip your wrist and look directly at it. An always-on clock is a vital feature that ensures smartwatches don’t resemble a computer on your wrist; it’s something Apple Watch severely lacks.

Brightness isn’t an issue either, but the lack of an auto-brightness setting means you’ll be constantly altering it manually. This isn’t ideal, and certainly noticeable when it’s dark and the whole watch lights up.

Thanks to the rotating bezel, you interact with the watch much less through the small touchscreen, but it’s still responsive to the touch. A couple of features short of perfect, then. 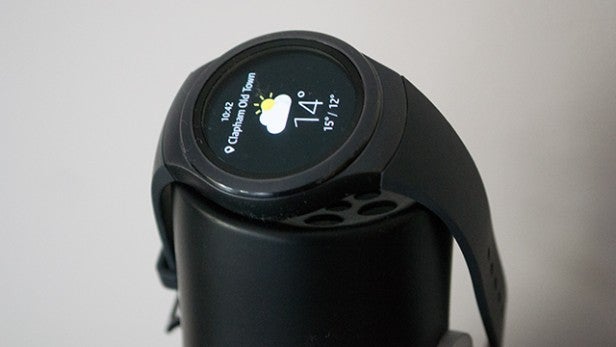 Referring to the performance of a watch can still seem slightly odd, but as proved by the first-gen Moto 360, it can be a real problem.

I can safely say it isn’t an issue on the Gear S2. The dual-core Exynos 3450 processor paired with half a gig of RAM is pretty standard on a smartwatch, and it provides plenty of oomph to keep the watch feeling smooth and fast.

Battery life, like performance, is also on a par with the majority of 2015 Android Wear devices – and slightly better than the Apple Watch. With the always-on mode turned on, the 250mAh cell can easily make it through the day and on until lunchtime the following day. Switch that off and the Gear 2 will keep going for about two full days.

Personally, I’d rather have slightly shorter battery life and always have the clock visible, but the option to turn it off is there if you want it. If you’re all about battery, I’d still recommend the Pebble Time Steel.

Charging is via the supplied wireless dock – it’s the spitting image of Motorola’s Qi cradle – and my Gear S2 can go from 0% to full in less than hour. Slightly annoying is the fact that there isn’t a way to power up the watch without the dock, but at least it’s a sleeker solution than those pesky charging adapters supplied with previous Gear watches. 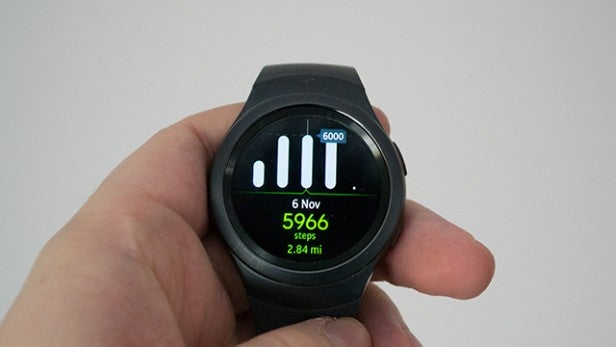 So far, things are looking pretty rosy for the Gear S2. It has a comfortable, sporty build, impressive display and performance and battery that are good – if not anything to worry the competition.

It’s a shame then that Samsung chose not to complete the package by opting for a more capable OS. Instead, the Gear S2 is severely limited by the Tizen operating system.

I’ll start with the bits I do like. For once, Samsung has made something that doesn’t disappoint in the looks department. The selection of watchfaces – which range from digital ones to those built for apps such as ESPN and Bloomberg – are attractive and customisable, and the general UI is slick.

As you scroll through your homescreens, widgets display handy information such as the current weather, your step count and current heart rate. They’re a little slow to update – the music one takes an age to show the current song I’m listening to, for example – but on the whole they’re easily accessible and handy tidbits of information that work well on a smartwatch. 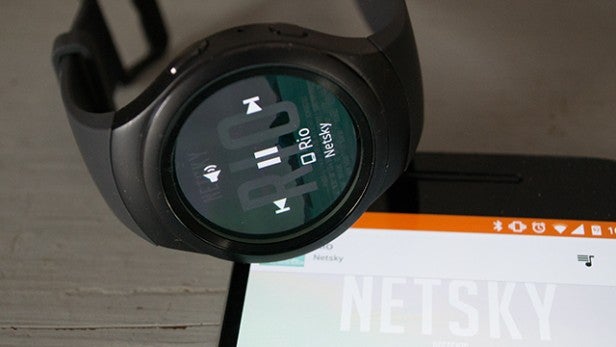 There’s also a good selection of fitness features, all tied together by Samsung’s S Health app. An accelerometer tracks your movements throughout the day, while the heart-rate sensor takes constant readings. The lack of GPS will put off those looking to ditch their dedicated running watch, though.

An IP68 rating means you’ll be able to submerge it in 1.5m of water for 30 minutes, and I’ve used it in shower without any issues.

I find the heart-rate monitor here to give much more accurate readings than Android Wear watches, which often fluctuate massively between readings, and the step-tracking is as good as a dedicated wearable such as the Misfit Shine.

The real problem with Tizen is the utter lack of apps. Now, while I don’t want apps on my smartwatch that I have to open, I do want them throwing up handy information – and to be there when it’s more convenient than whipping out my phone.

Apps such as Citymapper, Uber, Google Maps and so on make sense on a wearable, but the Gear S2 app store is a barren wasteland. Aside from an overly US-centric ESPN app, I haven’t really been able to find something that I want to download and install. Not good. 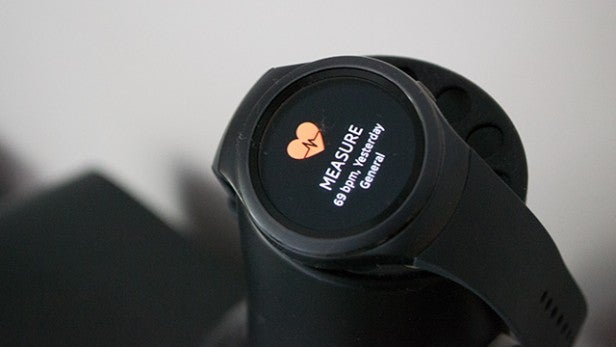 With the Gear S2 costing a pretty pricey £249, I’m not sure why developers would bother building apps for this platform rather than focusing on Watch OS and Android Wear. This could be a serious problem for the longevity of the Gear S2.

Notifications – the bread and butter of any decent smartwatch – are also hit and miss. Connected to a Nexus 6P, HTC One A9 and Moto X Style – all at different times, obviously – buzzes of new alerts were constantly a good second or so behind the phone. And when they did come in, they were too quick to disappear from the watch. I was left wondering what that last buzz was about until I headed into the notifications section.

S-Voice, Samsung’s alternative to Google voice search and Siri, is another disappointment. It’s limited in what it can do – it won’t even let me quickly create a note. When it does work – calling a contact, for instance – it’s slow.

The Tizen experience is frustrating. It looks good, but limited app support is a bleak sign for the future and the poor voice integration is a shame. If Samsung really is so against using Android Wear, it needs to find a way for developers to choose its platform instead. 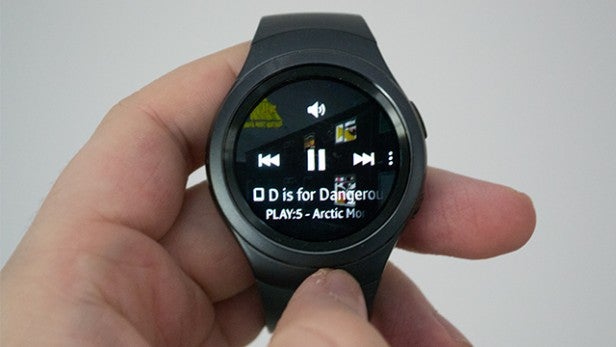 Should you buy the Samsung Gear S2?

The Gear S2 is a good smartwatch, but the limited Tizen operating system stops it from being a great one. At least Samsung didn’t make it exclusive to Galaxy handsets; the Gear 2 will work with any Android 4.4 device with 1.5GB of RAM or above.

The build, display and the fantastic rotating bezel – the cleverest input method on a watch yet – are all impressive and it’s Samsung’s best wearable, but it’s not better than anything running Android Wear. That could change if Tizen takes off, but judging by previous devices running the OS, this is unlikely to happen.

Poor voice search, the on-occasion dodgy notifications and lack of customisation on the cheaper model also make the Gear 2 more difficult to recommend.

Samsung has improved plenty with the Gear S2, but it just isn’t quite enough.

A well-built smartwatch with a great screen, but it’s let down by a lack of support and the half-baked Tizen operating system.