LG’s G3 betters it in resolution too – it has a QHD screen where the OnePlus is ‘just’ 1080p. However, the phone’s display is impressively sharp. Anyone complaining about a pixel density of 401pp when their laptop may offer under 150ppi needs to examine their priorities. 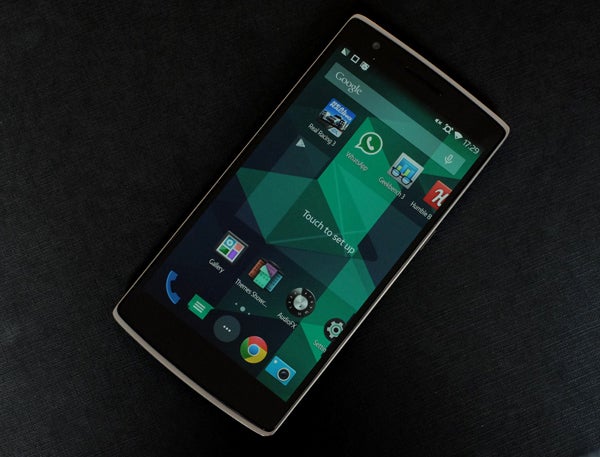 Such a large, sharp screen is great for web browsing, watching videos and playing games. The only real downside about the size is that you need to get two thumbs involved to browse or type remotely fast.

Actual screen quality is very good. The OnePlus One uses an IPS LCD screen, the same kind used by the iPhone 5S and Sony Xperia Z2.

Viewing angles are strong for an LCD, top brightness is good and, as with all good top-end screens, the display has the appearance of being right on the surface of the screen. Lesser displays often appear a bit recessed, reducing that desirable image ‘pop’.

However, there is one slightly odd calibration issue. OnePlus has chosen to give the One’s display a very warm hue, making whites appear a little yellowy.

It’s probably better than the screen appearing overly cool but is initially distracting. When browsing, the white backgrounds of pages appear slightly off-white, and the effect is pronounced enough for people not entirely screen-obsessed to notice it.

The OnePlus One does offer a screen customisation menu that lets you alter the screen’s character a little, but fiddling with the actual white balance is easier said than done.

This menu gives you control over colour saturation, contrast, intensity and hue. The latter is the only one that really affects the character of the screen’s colour, and its effect is rather too radical. You’re more likely to end up turning your reds into greens than tweaking the white balance. 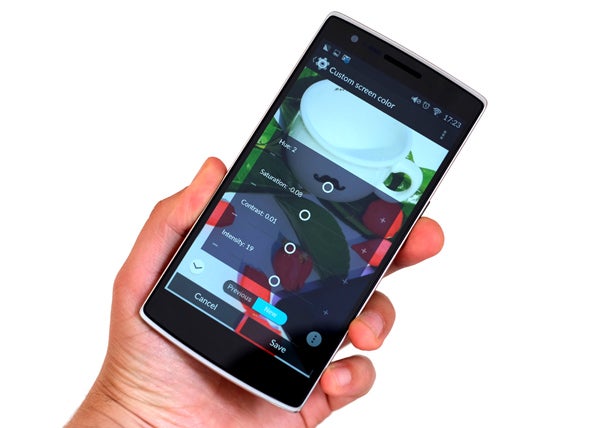 The only other real limitation of the screen is something common to all LCDs – black level and contrast aren’t quite up to the Samsung Galaxy S5‘s OLED display. However, it’ll be a while before we see LCD-based screens that can really challenge OLEDs on this front – if it ever happens.

Outdoors visibility is also not a patch on the Galaxy S5, which can offer staggering brightness when it’s really needed (not manually, though, as such brightness is too much of a burden of responsibility for you, apparently).

One early worry we had about the OnePlus One was that it would not use a proper toughened glass top screen layer – it seems an obvious place to save a few pennies/Yuan. However, the One has a top-notch Gorilla Glass 3 layer that is smooth, tough and scratch-resistance. Smiles all ’round.