One area where the specs of the OnePlus One seem to fall behind the very top phones is its camera. It has a 13-megapixel main sensor where the Galaxy S5 has a 16-megapixel sensor and the Sony Xperia Z2 a 20.7-megapixel one.

Specs are not everything, but the Galaxy S5 does manage to comfortably outperform the OnePlus One, with greater detail and sharpness. However, dynamic range is good in its class, and while there is some minor purple fringing in areas of high light contrast, it’s nowhere near as bad as it is in the HTC One M8 camera. You can take great photos with the OnePlus One.

Before we get a look at the photos we took with the OnePlus One, a bit for the spec-heads: the phone uses the Sony IMX214 sensor, the same found in the Huawei Ascend P7. It’s a 1/3.06-inch 4:3 sensor whose improvements over former Sony models (used widely) focus on colour and HDR performance.

The OnePlus One’s lens is a six-element, f/2.0 arrangement with a 35mm equivalent focal length of around 30mm, much like the iPhone 5S. 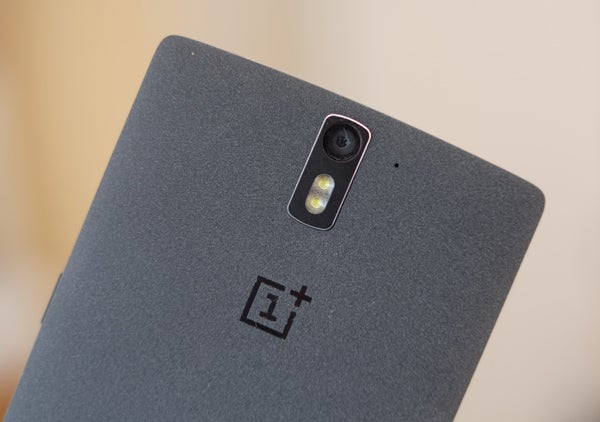 While some may do the OnePlus down for having not quite the same image quality as the very best phones on the market, it actually has one of the very best cameras at its price, one that grinds the Nexus 5 into dust. If only it had OIS, it’d be a true winner.

The one other real niggle we found when using it is that as the lens is so close to the top of the phone, it’s annoyingly easy to cover with your finger.

Next, onto the photos. 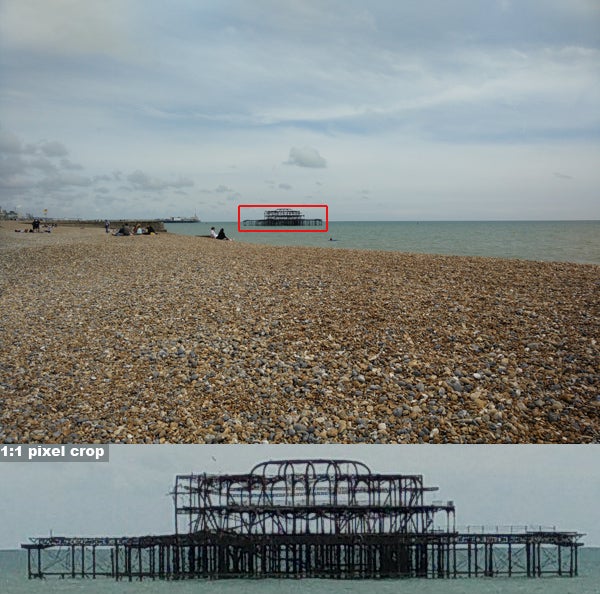 Here we see the sort of detail the OnePlus One can harvest. It’s pretty sharp, and even the finest struts of the defunct Brighton pier are well-resolved. In the crop you can see a tiny bit of purple fringing, but nothing too apparent.

Exposure is perhaps a tiny bit conservative, but if you want images with a bit more pop, you can always use the HDR mode. We’ve heard complaints about the OnePlus One’s undersaturated colours, but in our tests they appear reasonably decent. 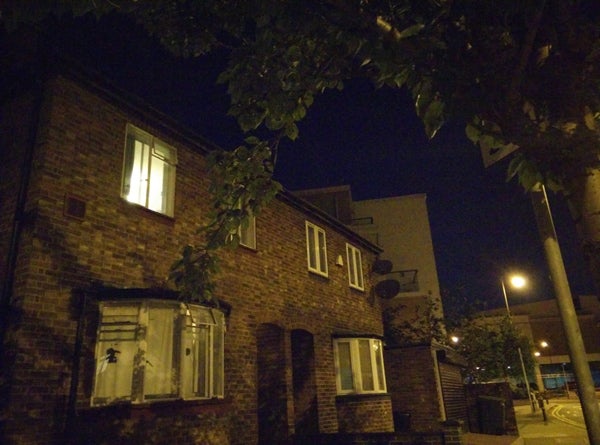 There’s more grain here than you’d get with a Galaxy S5 or Xperia Z2, but the OnePlus One has coped pretty well, making the image nice and clear without resorting to making the photo appear unnatural.

The OnePlus also has a dual-LED flash to help out in dark conditions, but it’s not a new-fangled two-tone LED to help maintain decent cololours – you get dual white LEDs. 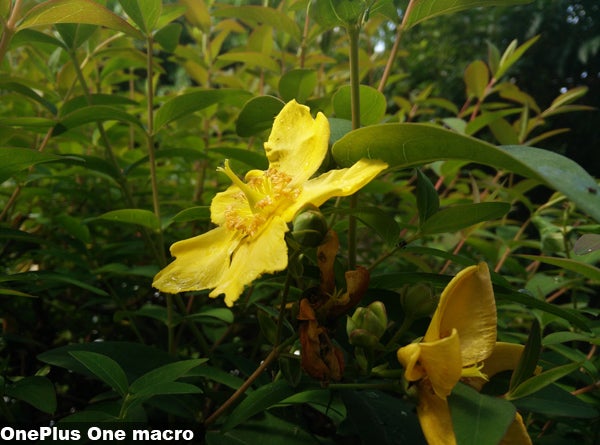 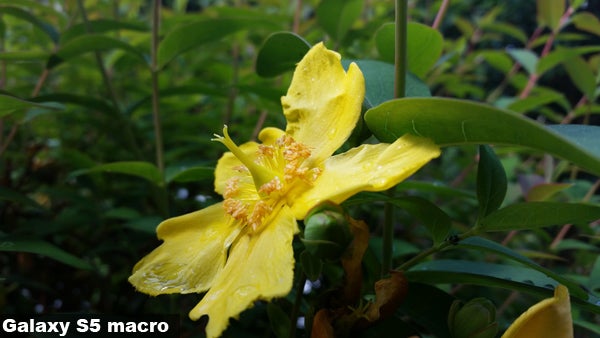 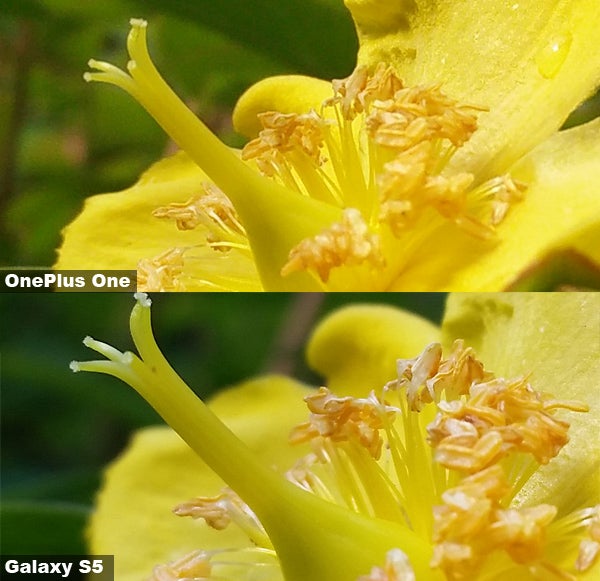 Here we tried to get as close to our subject, the flower, as possible while mainting a good focus. Note that despite the good lighting, the OnePlus One still produces a little bit of grain throughout the image — something we also saw in the Huawei Ascend P7 camera (which shares the sensor). It’s not ugly grain, though.

The OnePlus One does reasonably well, but the Samsung Galaxy S5 trumps it on several fronts: depth of field (check out the blurred background ‘bokeh’ on the Samsung), clarity of fine details and how close we were able to get to the flower. 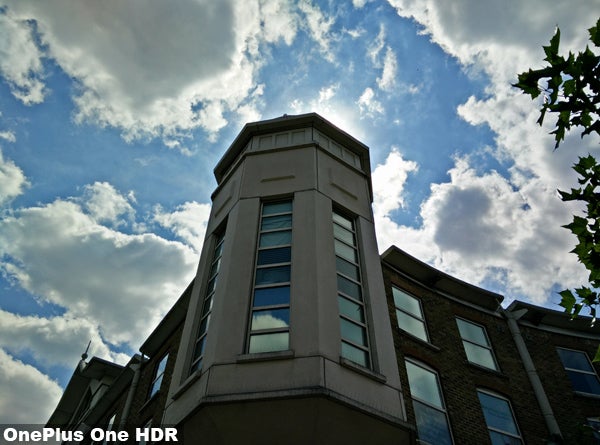 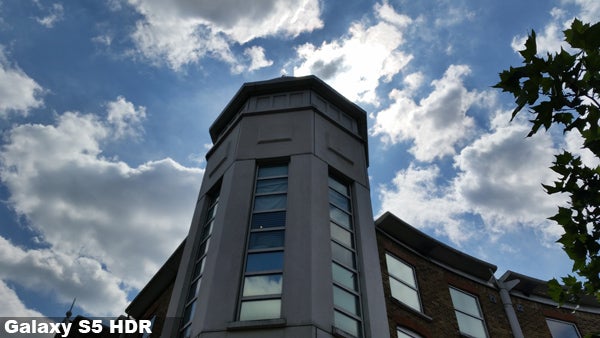 For HDR we once again bring in the Galaxy S5, which offers the best HDR mode in the business. The shot is a typical example of what HDR is good for. The sun is right behind the tower, producing the camera conundrum: exposure for the sky and make the building all-but black or exposue for the building and hugely overexpose the sky? HDR gives you a best of both worlds image by merging multiple exposures.

Both these modes are very effective, and we found the HDR mode of the One useful for perking up photos with tricky lighting conditions. However, the Galaxy S5’s mode brings more lifelike-looking images where the OnePlus One tends to go overboard a bit — it’s at the level Samsung was at about a year ago.

The OnePlus One mode is also a little on the slow side, taking a couple of seconds to process shots. Again, this is where we were at last year with Samsung.

Video
For video, the OnePlus One offers everything you could ask for at this stage. As standard it shoots at 1080p resolution, but both UHD and DCI 4K capture modes are there to use too. DCI is even higer than UHD, with 4,096 x 2,160 resolution giving you a slightly wider aspect.

Shooting in 4K clearly takes its toll on the OnePlus One as the preview window goes a bit juddery, but the feature is there for those who want it. An 18 second clip takes up 134MB, though. Ouch.

Front-facing camera
The OnePlus One has a much higher-than-average resolution front camera, with a 5-megapixel sensor. It won’t offer the image quality of a good 5-megapixel rear camera – everything gets a bit grainy zoomed-in — but you get far more detail than normal. You can see individual eyebrow (and in my case beard) hairs, for example.

The OnePlus One camera app is pretty gesture-based. You swipe up and down on the screen to select modes, rather than pressing an on-screen button as you do in most other phones.

However, there are some buttons down at the bottom of the screen that do offer a more traditional list of modes following a few button presses. 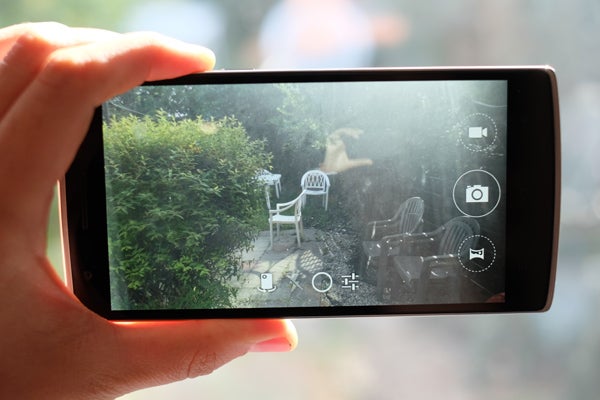 What do you get? Aside from the good HDR mode, not masses. Rather than trying to add loads of creative modes like the Sony Xperia Z2 and Samsung Galaxy S5, the OnePlus One keeps things relatively simple: