What is the Nvidia GeForce GTX 980?

The GTX 980 has been around since late 2014. Since then the market has matured, with a flood of third-party cards offering increased clock speeds and new features, and the GTX 980’s original price of £430 has come down, with some versions of the GPU now available for less than £400.

Nvidia GeForce GTX 980 – Under the Hood

The GTX 980 is one of the most powerful cards in Nvidia’s current range. For starters, it’s based on the Maxwell architecture, whose primary focus is performance while also dramatically reducing power consumption.

The GTX 980 is built from 5.2 billion transistors and 2,048 stream processors, so it clearly has the grunt to handle top-tier games. Its 1,126MHz stock speed can ramp itself up to a peak of 1,266MHz using GPU Boost, and it has 4GB of GDDR4 memory clocked to 7,010MHz. While this appears decent, the memory is accessible only using a 256-bit bus – a specification that in 2016 is looking a little long in the tooth. 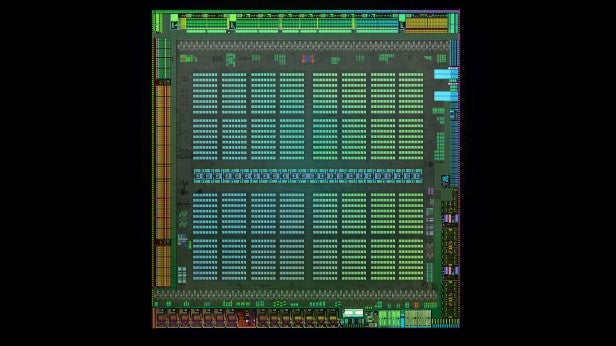 There are only two Nvidia cards that are more powerful than the GTX 980 – and the GTX 980 Ti and Titan X both use eight billion transistors and 3,072 stream processors.

The GTX 980 is a high-end chip that has to compete against a pair of AMD’s finest cards. Sitting alongside the GeForce GPU is the Radeon R9 390X, which costs between £350 and £380. It uses the Hawaii XT core that formed last year’s top-tier AMD GPUs, and it boasts 2,816 stream processors, 6.2 billion transistors and a 1,050MHz core. It doesn’t have any GPU-boosting, but its 8GB of GDDR5 memory is accessed using a 512-bit bus.

Above the GTX 980 and R9 390X is AMD’s R9 Fury. That card uses the new Fiji core and AMD’s High Bandwidth Memory, which drops memory speeds but allows 4GB of memory to be accessed using a super-wide 4,096-bit bus.

The GTX 980 has ample competition in a busy area of the market – but that’s no surprise when this card is so versatile. It’s able to blast away games at 1080p and 1440p, but also has the power to handle top titles at 4K.

This capability means it won’t struggle with games on 3,440 x 1,440 widescreen panels either, or titles run through VR headsets such as the Oculus Rift and HTC Vive. Indeed, the GTX 980 is officially ‘VR Ready’, according to Nvidia’s badging system, and both Vive and Rift both support the card.

Trusted explains: What is Virtual Reality?

1080p: There’s no question about the GTX 980’s 1080p abilities. Its poorest average frame rate came in Crysis 3, which is the toughest test game – but even so it scored a butter-smooth 73fps average with a stunning minimum of 58fps. The GTX 980’s top 1080p result was in Tomb Raider, where it hit a minimum of 128fps and an incredible 157fps average.

1440p: The GTX 980 can handle 1440p titles without breaking a sweat, but this is the first area where it’s worth comparing Nvidia’s GPU to its two rivals from AMD. 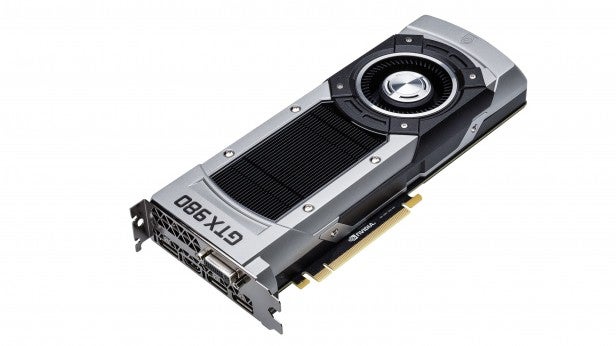 The GTX 980’s Battlefield 4 minimum and average results of 41fps and 55fps, for instance, are excellent – easily playable. But the R9 390X and R9 Fury were around five and ten frames quicker respectively in both of those tests. This pattern was repeated in Metro: Last Light, too.

Things were much more equal between the three in GTA V, Batman: Arkham Origins and Crysis 3, with the trio trading places for best average and minimum frame rates at 1440p.

The GTX 980’s best performance came in BioShock Infinite, where its 63fps minimum easily beat the AMD cards – although the R9 390X and R9 Fury’s minimums of 14fps are likely caused by a driver issue. And the Nvidia card’s average of 77fps is perfectly playable, but it’s a couple of frames slower than the R9 390X and further behind the Fury.

Nvidia’s card didn’t overhaul its rivals in any 1440p benchmarks, but it returned easily playable frame rates in every test title – which, arguably, is just as important.

4K: The GTX 980’s position behind both AMD cards continued in the 4K tests – and the increased demands of gaming at 3,840 x 2,160 also means the GeForce card wasn’t quite playable in every game.

Its Battlefield 4, minimum and average results of 20fps and 28fps, for instance, are a little sluggish, with both AMD cards proving faster. I only managed to get the GTX 980 to run the game smoothly by dropping anti-aliasing, which saw the card’s score improve to 31fps and 41fps.

The GTX 980 was better in Batman, where its 45fps minimum was bolstered by a 61fps average soundly beating the R9 390X. The Fury, though, remained faster. It was a similarly muddy situation in BioShock Infinite: the GTX 980’s 34fps minimum ensures playability and is better than both AMD cards, but both AMD cards had better average frame rates.

The GTX 980’s Crysis 3 minimum and average results of 15fps and 23fps mean that graphics settings will have to be dropped in order for the game to run smoothly; both AMD cards were faster. It’s a better bill of health in Tomb Raider, where the GTX 980’s results of 38fps and 45fps were playable, although both AMD cards remained quicker. 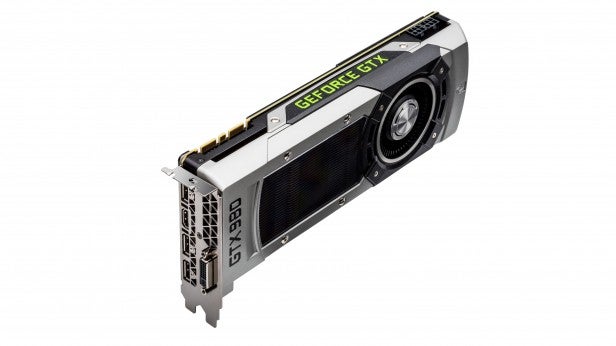 In Middle-earth: Shadow of Mordor, the GTX 980’s minimum of 30fps means the game will be playable at its Ultra settings, and that result matches the R9 390X. However, the GTX 980’s 36fps average was six frames behind the AMD card – but it’s still a reasonable performance. Nvidia’s card then hit an average of 44fps in Grand Theft Auto V – two frames ahead of the R9 390X, but undermined by a slower minimum.

The waters are certainly muddy at 4K. The GTX 980 manages to take victories in five of my tests at this resolution, but the R9 390X is a clear winner in more minimum and average frame-rate benchmarks – and the Fury is further ahead.

Nvidia’s card was similarly competitive in Unigine Heaven. The GTX 980’s 1440p result of 35.8fps was a couple of frames ahead of the R9 390X but comfortably behind the Fury, but at 4K it fell behind both cards.

It’s a mixed bag in the performance tests for the GTX 980, but there’s one area where Nvidia’s Maxwell cards always beat AMD: power consumption. With Nvidia’s card installed, my test rig required a reasonable 273W from the mains. That’s far less than the Fury-powered PC, which needed 373W – and even better than the R9 390X-powered machine, which needed 410W.

Power consumption will be a peripheral concern for many gamers, but it’s still worth bearing in mind – and not just because of its impact on your electricity bill. A card that’s cooler and more efficient can rest easier inside small-form-factor systems, and these GPUs are often quieter and more receptive to ambitious overclocks.

Not surprisingly, the highest overclocks are reserved for the priciest cards. Gigabyte’s £440 model has a 1,228MHz core, and the best tweak I found was on EVGA’s £470 model, which runs the core at 1,241MHz.

The efficiency of the Maxwell architecture means those Nvidia cards all have more impressive tweaks than AMD’s rivals. The best R9 390X I could find sees the 1,050MHz core upped to 1,100MHz – and that’s on the most expensive card. The most ambitious improvement to the Fury has the 1,000MHz core tweaked only to 1,050MHz. 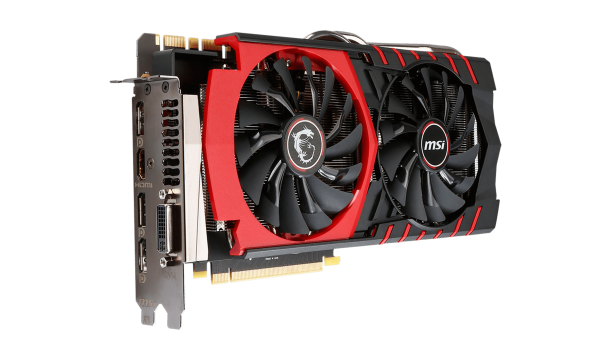 It’s a clear victory for Nvidia when it comes to overclocking, then, but it might be worth holding off a GPU purchase if you don’t need a new card immediately. That’s because Nvidia and AMD are both allegedly preparing new GPUs, with Nvidia’s Pascal architecture and AMD’s Polaris hardware almost ready for launch.

Nvidia Pascal is moving to High Bandwidth Memory and a unified memory architecture between CPU and GPU. This will sit alongside a system that will further reduce the number of stream processors inside each multiprocessor, which will allow for more granular workload management across the card.

AMD’s Polaris architecture, meanwhile, sees the firm move to a 14nm manufacturing process and a second generation of High Bandwidth Memory – both developments that will increase performance while delivering a significant efficiency improvement.

There are new cards on the way, then, but even then it could be worth keeping an eye on the GTX 980. There are still plenty out on the market and are still be amply quick, and new releases could push card prices down.

Should I Buy the Nvidia GeForce GTX 980?

The Nvidia GeForce GTX 980 is an impressive high-end graphics card. It wields the power to blitz 1080p and 1440p games, and it’s able to handle most titles at 4K – even when it can’t quite manage playable frame rates, it isn’t far off. That bodes well for widescreen and VR gaming, too.

AMD, however, offers more. The R9 390X costs a similar amount to the GTX 980 and it’s marginally faster in most tests, and the R9 Fury’s premium price is justified by significantly better benchmark results.

Nvidia’s card is fast and more efficient than its rivals, but the AMD cards are pure gaming GPUs. You won’t be disappointed with a GTX 980, but be aware that other cards are quicker.

The GTX 980 is a capable card with the grunt to handle anything at 1080p and 1440p and almost all games at 4K, too. However, AMD’s two rivals offer performance improvements for similar cash. If you want to stay green, the GTX 980 is a good option – but be aware that other GPUs are better for speed.