The Nokia Lumia 530 is the lowest-price Windows Phone mobile Nokia has produced to date. It’ll take over from the super-popular Lumia 520, and starts at an even lower price – £79.99 on pre-pay.

As with any Nokia phone, you get a reasonable base level of design and build here. But we find it hard to stomach that this is – in several ways – a step down from the Lumia 520, a phone that for now can be had for £20 less. 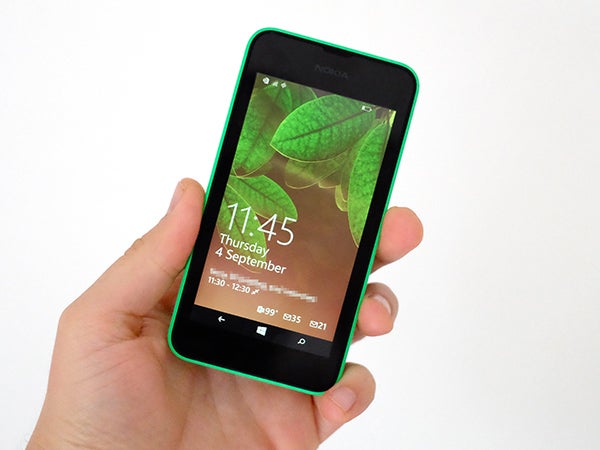 No matter how much money is stripped away from the budget, Nokia always tries to put that little bit of extra attention into the design of its phones. With the Nokia Lumia 530 there’s very little extra budget to put aside, but it’s still better-looking than some low-cost phones from the smaller names.

The back of the phone is a simple textured plastic, and there are none of the finishing touches of the slightly more expensive Lumia 630 and Lumia 635. No translucent layers to give depth to the finish, and after a few days’ use we can see where the texture of the plastic back is starting to wear to a shine a bit.

It may be a cheap suit among phone covers, but you still get
colour-matched power/volume buttons, and the characteristic Nokia option
of bright colours. The Nokia Lumia 530 comes in bright green and orange
as well as black and white. 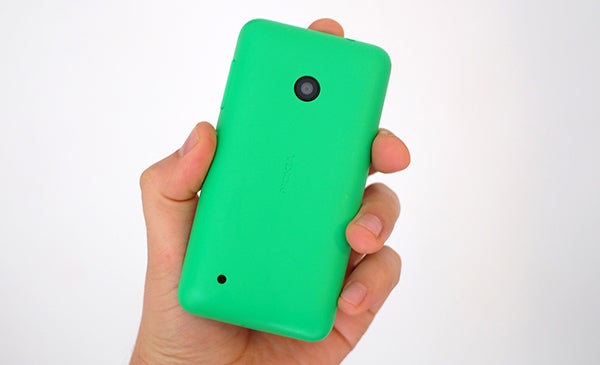 These colours seem to be all the rage over at Nokia towers this year, being the same ones on offer for the Lumia 630 and Lumia 930.

In-hand, it’s pretty obvious this is a cheaper phone. However, the smoothly curved back feels good and the 4-inch screen ensures easy handling even though the Lumia 530 is pretty chunky at 11.7mm thick. 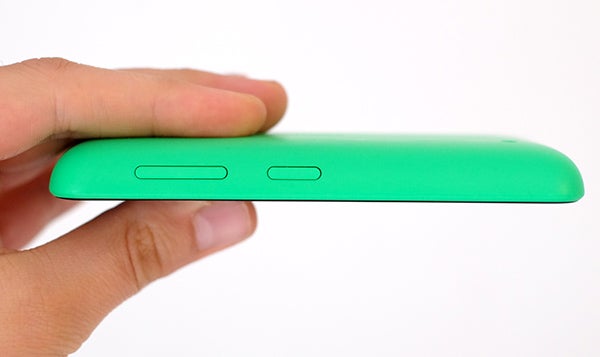 We also like that the Lumia 530 isn’t laden with seams. Oddly enough, the Lumia 930 has loads more even though traditional logic suggests the more seams something has, the scrappier it’s likely to look. Although not really a unibody phone at all, the full coverage of the back cover gives the phone the unibody look.

Pop the back off and you’ll see the microSD slot, removable battery and microSIM slot. This has become the standard complement for a budget phone, and the Lumia 530 certainly needs its memory card slot. It’s one of the first Windows phones to offer just 4GB of storage, as previous versions of Microsoft’s OS mandated at least 8GB. Storage is pretty tight once the space taken up by the default software is accounted for – this will be no travelling video collection.

Windows Phone fans may also notice another sign that this is a new-ish phone – there are no physical soft keys, and no camera button. These, and 8GB storage, are all things found in the older Lumia 520. The Lumia 530 is pretty stripped-back even in the budget Windows phone stakes. 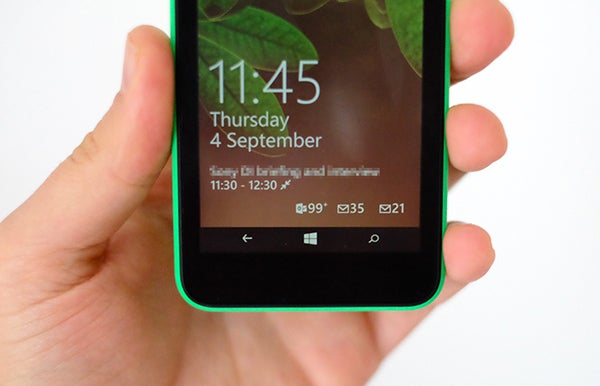 The phone also has a pretty low-end screen. It’s four inches across and 480 x 854 pixels in resolution.

It’s a small, fairly low-res display. However, much like the Lumia 520, as the screen is quite small the pixellating effects of the resolution aren’t terrible.

The Lumia 530 display offers 245ppi, which isn’t too far removed from the 256ppi of the (admittedly much better) Motorola Moto E. As long as you don’t look too close, the pixels don’t scream at you like babies crying on a long-distance flight.

Of course, that only affects the sorts of things when resolution doesn’t matter hugely. We still found browsing the web a bit of challenge. Reading articles through the combo of low resolution and small display size isn’t a great deal of fun. This sort of limitation applies to gaming too. 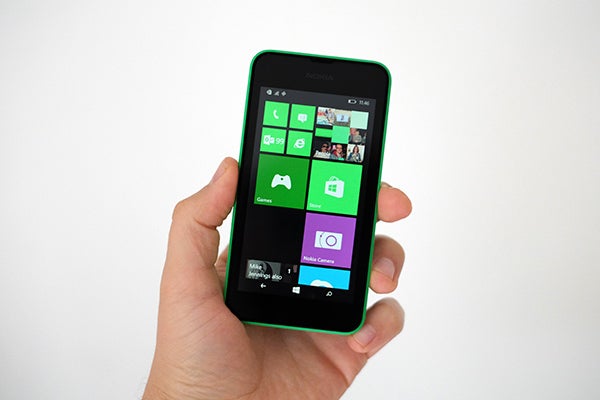 Image quality isn’t great either. The Nokia Lumia 530 uses a TN panel rather than an IPS one, and these types of screen suffer from contrast shift, which is where the character of the display changes quite radically when tilted away from the perpendicular.

Tilt the Lumia 530 left and it goes darker, tilt it right and it goes brighter and more washed-out. Turn the display more than a few degrees to the left and you get colour inversion, making the screen barely comprehensible at times.

Numerous low-end phones still use these kinds of basic screens, but the Lumia 530 is positively blown out of the water by the Motorola Moto E, which offers a 4.3-inch 950 x 530 pixel IPS screen at the same price. Even the Lumia 520 used an IPS screen, albeit a pretty low-end one.

It’s a very disappointing screen all-in, with limited black level, and contrast issues that exhibit most noticeably as hard-to-read text when the font’s white and the surround colour is bright-ish too. That may sound like an unusual situation, but it’s pretty common in Windows Phone 8.1’s Live Tiles.

The Lumia 530 is simply not that nice to look at, either. The layer of glass that sits on top of the screen has a mottling effect that spoils the look of any areas of bright, block colour. Again – Live Tiles, anyone? 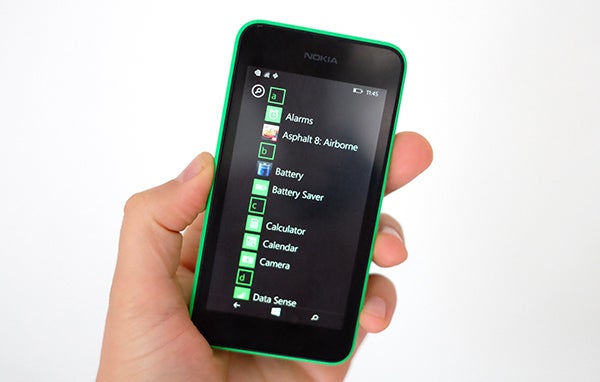 There are a few positive things to say about the screen’s construction, though. It may not use Gorilla Glass 3, but the top glass layer does still seem to be pretty tough. Weak screen coverings tend to flex pretty easily under pressure, but with the Lumia 530 you have to press just as hard as you do with Gorilla Glass to make the screen distort.

The Lumia 530 screen is not too recessed, either. This limits how badly the phone suffers from reflectivity, meaning it’s reasonably clear outdoors even though top brightness isn’t exactly eyeball-melting.

Altering brightness to cope with daylight reveals one of the Lumia 530’s most annoying traits, though. Like the Lumia 630, there’s no auto brightness setting as the phone does not have an ambient light sensor.

Most phones can automatically turn the screen’s intensity up and down to match the surrounding light conditions, but here you have to do so manually. The toggle that switches between the three low-mid-high levels is accessible from an easy-access drop-down menu, but having to flick through settings several times a day gets annoying. Especially when you press the button one time too many and end up with a barely visible screen on a sunny day.