The Nokia Lumia 530 runs Windows Phone 8.1, the latest version of Microsoft’s mobile OS at the time of writing. For those who have experience with Windows Phone 8, or even Windows Phone 7, it’ll seem very familiar.

You have your home screen of Live Tiles and the apps menu, both of which scroll vertically. It’s fairly easy to use, even though its style is actually quite different from the other two big mobile OSs: Android and iOS.

Microsoft made a bunch of important updates in the 8.1 edition that bring the system a little closer to these two, though. First, there’s now a drop-down menu of notifications and features switches.

Finally, you don’t need to head into the email app to check out the gist of your latest emails with a Windows phone. It’s an improvement. 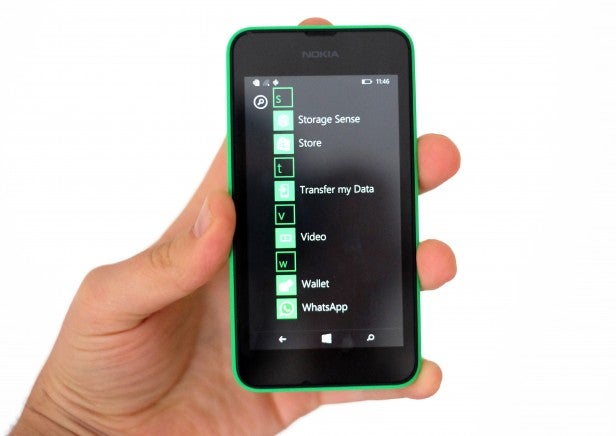 The software soft keys are new too – previously phones had to have hardware ones. Neither the drop-down nor the soft keys look quite as good as much of the Windows Phone 8 bedrock that they sit on, but it’s just a sign that Windows Phone 8.1 is really just a bit of a stop-gap release before we see Windows Phone 9 later down the line. And a bit of visual scrappiness is nothing to complain about much in a phone like the Lumia 530 that costs under £80.

What hasn’t changed much is the generally very good performance of Windows Phone. You can flick through the basic Windows interface about as fast as your fingers allow, without any of the stuttery lag you might see in some Android phones in this entry-level class.

However, this only really applies to the real core of the Windows Phone 8.1 system – the home screen and apps menu. All bets are off when you head into an app, and here we do start to see the cuts to the Lumia 530’s internals a bit.

Apps often take quite a bit longer to load than we’d like, and moving within an app is generally a lot less slick than it is in the core UI. Not disastrously so in most cases – but it’s the first impression that’s the best when it comes to the Lumia 530’s performance. Actually use it for a while and you realise: it’s not very fast. 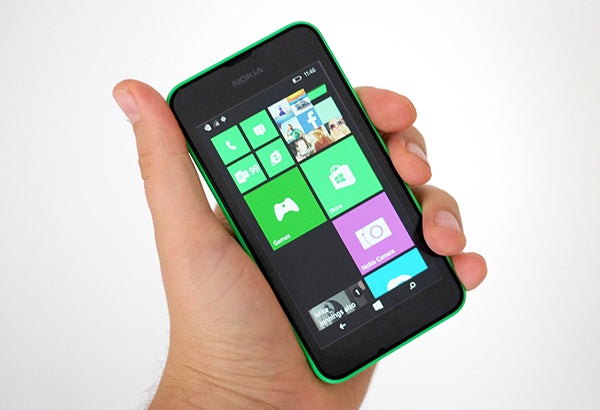 The phone uses a quad-core Snapdragon 200 1.2GHz CPU, a low-end processor with really very low-power Cortex-A5 cores. A ‘quad-core’ tag is nice to have, but we imagine the Lumia 530 might perform better with the dual-core Cortex-A7 Snapdragon 200 used in the Motorola Moto E.

The phone takes 1503ms to complete the Sunspider java benchmark, which is pretty low for a Windows phone – they’re often quick compared to Androids in the same class.

But do you really notice it in gaming? We honestly found it hard to test to start with as the Lumia 530 barely has enough storage to install the few high-end games – like Gameloft’s Asphalt 8 – that exist on Windows Phone. After taking a few photos, we had well under 1GB to play with.

Thankfully, though, the system makes it very easy to install apps to a microSD card. We tried again, this time with a 64GB microSD installed.

Asphalt 8 runs, and looks fairly good despite missing out on lots of the visual flash you’d get in a high-end phone. However, it does get quite choppy when there are a few cars on screen, and the audio is quite broken throughout – something that is actually more annoying than the frame rate issues.

The Lumia 530 also struggles with playing 720p MP4 videos, which is hardly a tricky task. In short, this is not a powerful phone.