For several years now, the HMD Global resurrected Nokia smartphone brand has been offering a certain type of no-nonsense package made up of solid build quality, pure Android software, and affordable price tags. That’s all most certainly true about the Nokia 5.4.

The Nokia 5.4 occupies one of the most competitive areas of the smartphone market – aiming to be one of the best cheap phones. At £159.99/$249.99/€189, it’s in direct competition with the likes of the Motorola Moto G30 and the Realme 7, both of which provide one or two stand-out features for a modest amount of money.

Compared to such strong rivals, the Nokia 5.4 runs the risk of blending into the background. As competent as the phone is, it fails to stand out in any meaningful way.

Nokia 5.4 design and screen  – Workmanlike in all departments

We’re well familiar with the modern Nokia design language by now. Scan through our previous reviews and you’ll probably see words such as ‘solid’, ‘dependable’ and ‘unshowy’ bandied around.

The Nokia 5.4 fits all three of those descriptions. It’s an all-plastic affair with a shiny rear panel and a matte rim, hinting at the more premium glass and metal materials you tend to get further up the market. There’s a fair amount of flex to the phone when you give it a solid twist and squeeze with both hands. 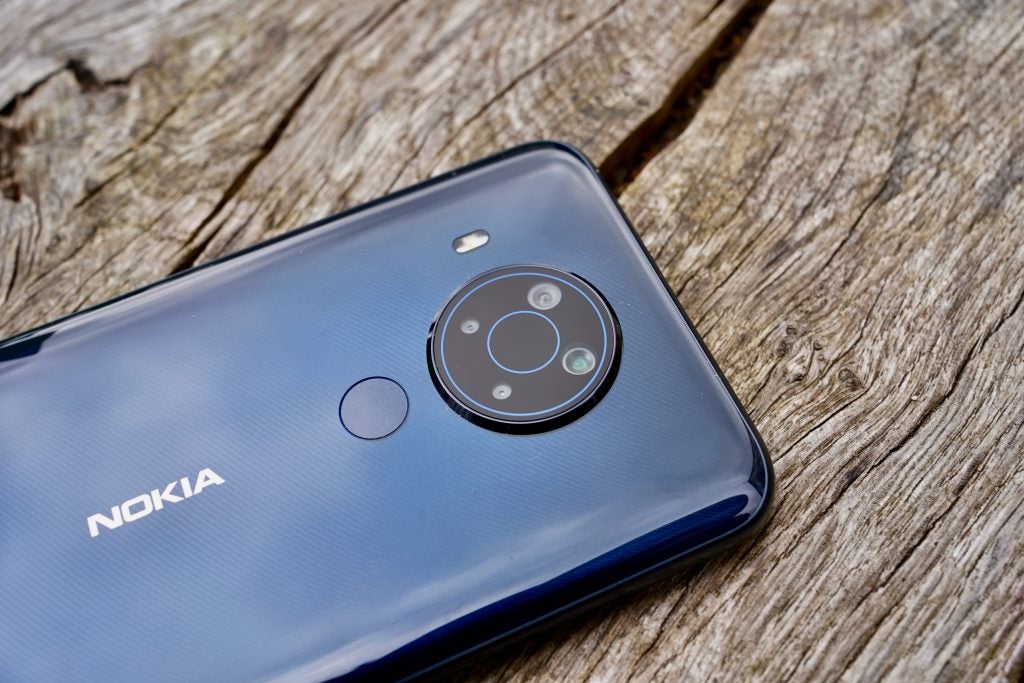 Despite the extensive use of plastic, this is a surprisingly heavy device at 181g. It’s thick, too, at 8.7mm.

It’s a perfectly fine design as cheap phones go, although I’d rather see manufacturers of cheap phones really lean into the plastic aesthetic and properly do away with the shiny metal and glass-aping finishes. They’re not fooling anyone, and it only attracts greasy fingerprints.

Talking of fingerprints, the Nokia 5.4’s biometric sensor is stashed on the back of the phone, just below a prominent centrally mounted camera module. It’s reliable enough, although it’s also quite shallow and tricky to find in a snap. It can be incredibly slow to unlock, too.

The front of the phone gives you a deeply underwhelming 6.39-inch display. It’s an LCD, and not a particularly great example at that. Colours are dim and muted, and it only gets to 400 nits of brightness.

Meanwhile, a resolution of 720 x 1560 makes video and photo content look disappointingly fuzzy. I’ve said it before, but 1080p (or FHD) really should be the bare minimum by now, certainly on devices costing £150 upwards. 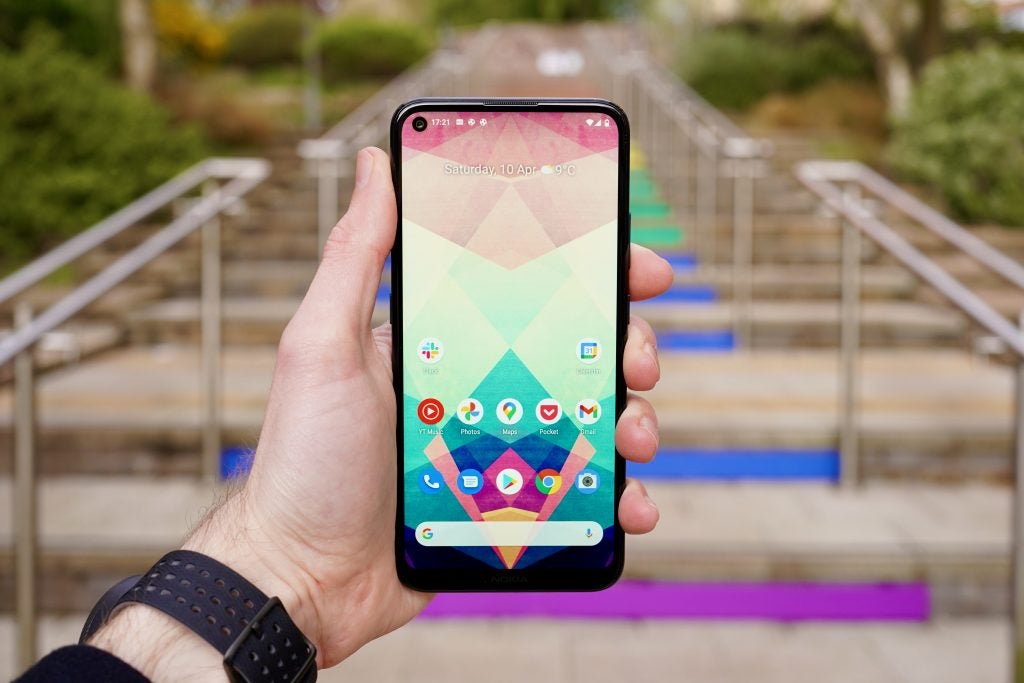 Another disappointment is the display’s bog standard 60Hz refresh rate. Yes, we’re talking about a £160 phone here. But the Motorola Moto G30 and the Realme 7 give you a 90Hz refresh rate for similar money, and the Poco X3 Pro offers the full 120Hz for not much more.

The Nokia 5.4 ostensibly features a quad-camera setup, but only the main (wide) sensor is worth a damn. It certainly isn’t one of the best camera phones around, even at this price.

Still, credit where it’s due: this 48-megapixel sensor is an upgrade over the 13-megapixel unit belonging to its predecessor, the Nokia 5.3. Paired with a wide f/1.8 aperture and PDAF (phase-detection auto focus), it’s a reasonably capable shooter in good lighting. 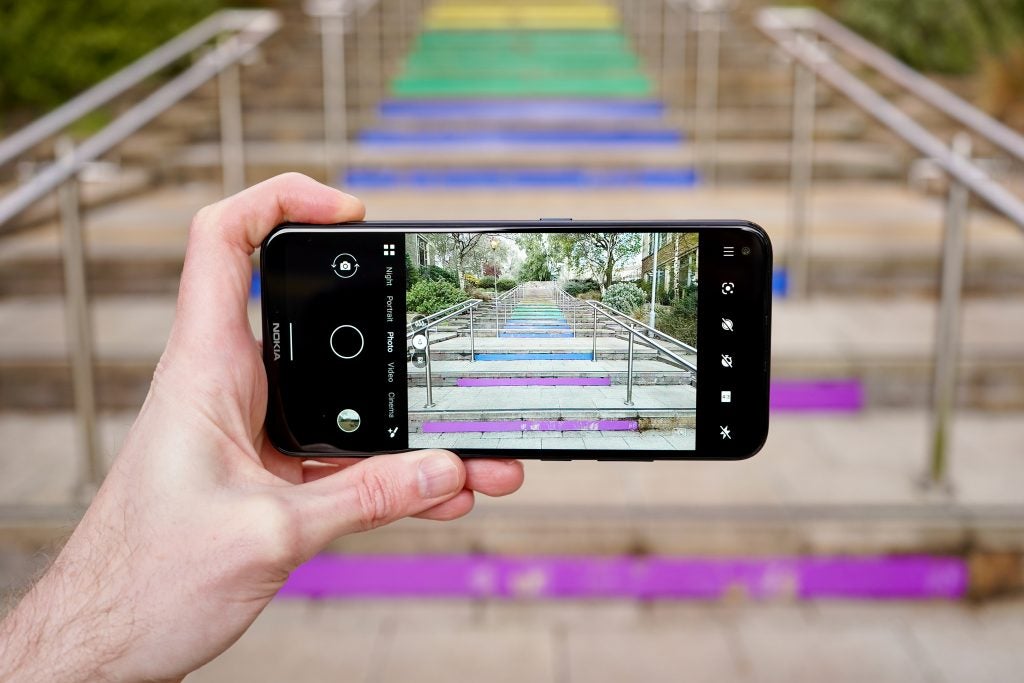 I was able to grab some surprisingly crisp and balanced shots off the bat, although there are plenty of issues. Zooming in will reveal considerable noise and over-sharpening, and any kind of pronounced movement tends to get picked up on, suggesting a sluggish shutter. It can struggle with dynamic range, too, blowing out bright skies and white T-shirts on a sunny day.

Portrait mode is able to isolate subject from background reasonably well for a cheap phone, but the bokeh effect isn’t especially convincing or appealing. Night shots, meanwhile, are a complete write-off. With no OIS, a small sensor, limited optics and modest processing power, low-light shots take ages to snap yet produce a dark, grainy mess. 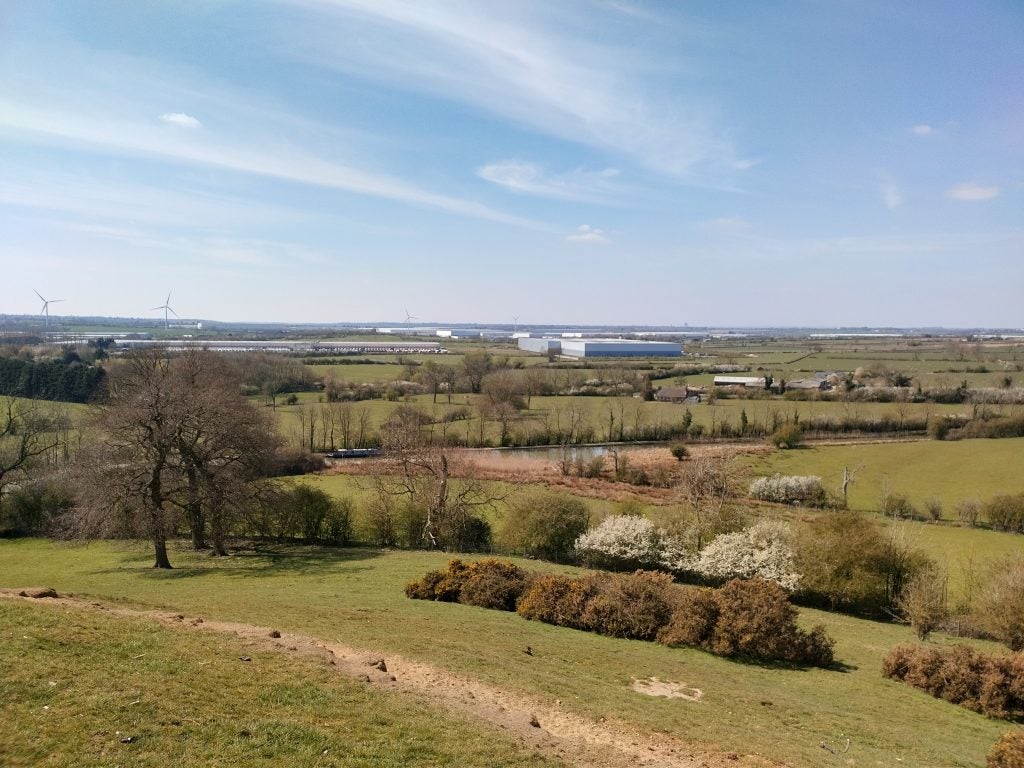 These are all complaints that could be levelled at other phones of a similar price, to varying degrees. And you’ll appreciate the work that Nokia has done with that 48-megapixel main sensor as soon as you switch to the 5-megapixel ultra-wide.

It’s truly terrible, yielding woefully soft, noisy shots even in good lighting. The edges devolve into such grainy mush that they can look like you’ve activated some dodgy art filter. It also sports a much duller, greyer colour tone compared to the main sensor. 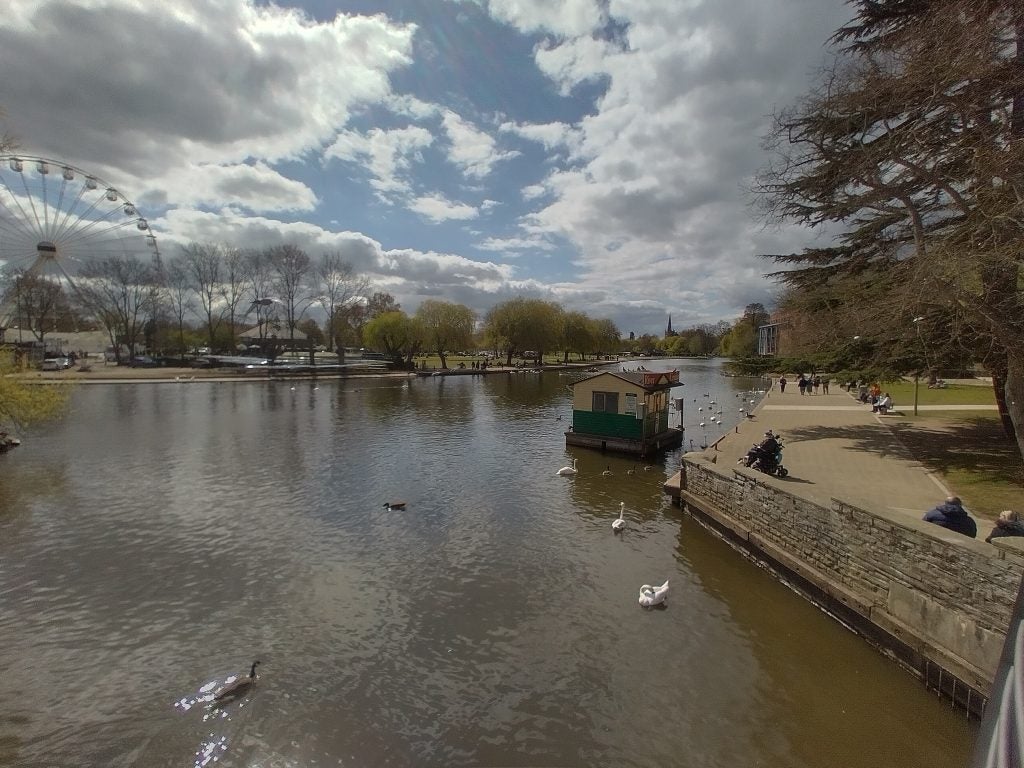 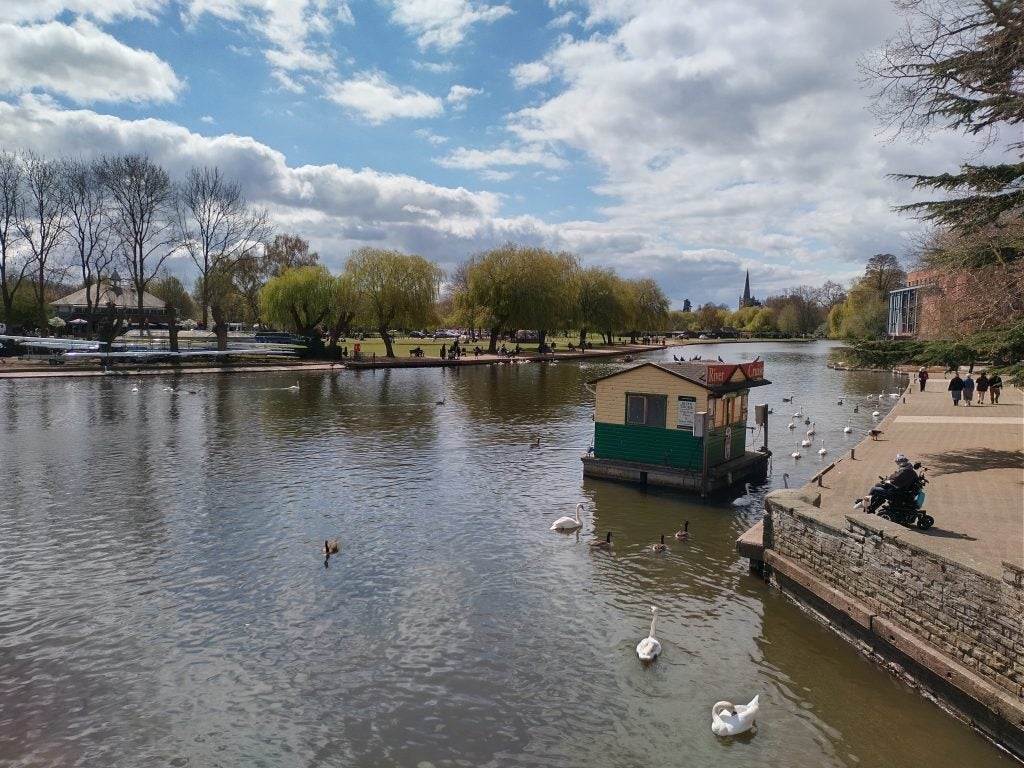 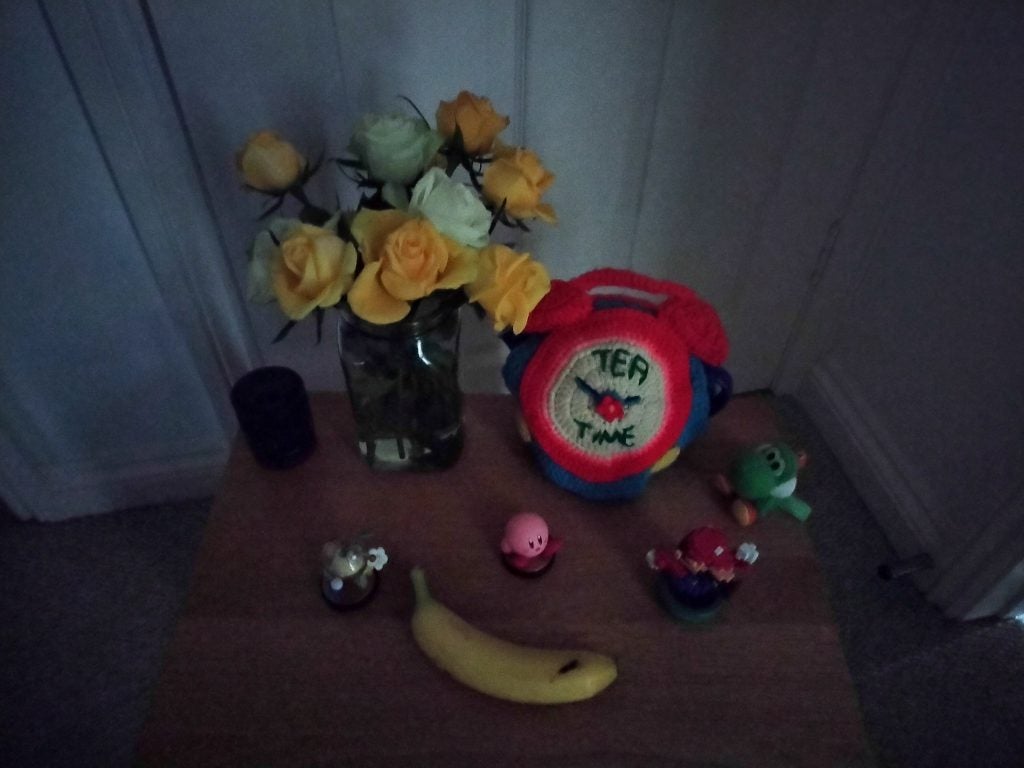 The 2-megapixel macro and depth sensors are barely worth the space they occupy, and we’re not going to waste any of your time discussing them. They’re terrible and useless, respectively.

One camera you’re far more likely to use is the Nokia 5.4’s 16-megapixel front-facing unit. Obviously it isn’t the best example of such a thing, but it’s capable of taking respectable selfies. 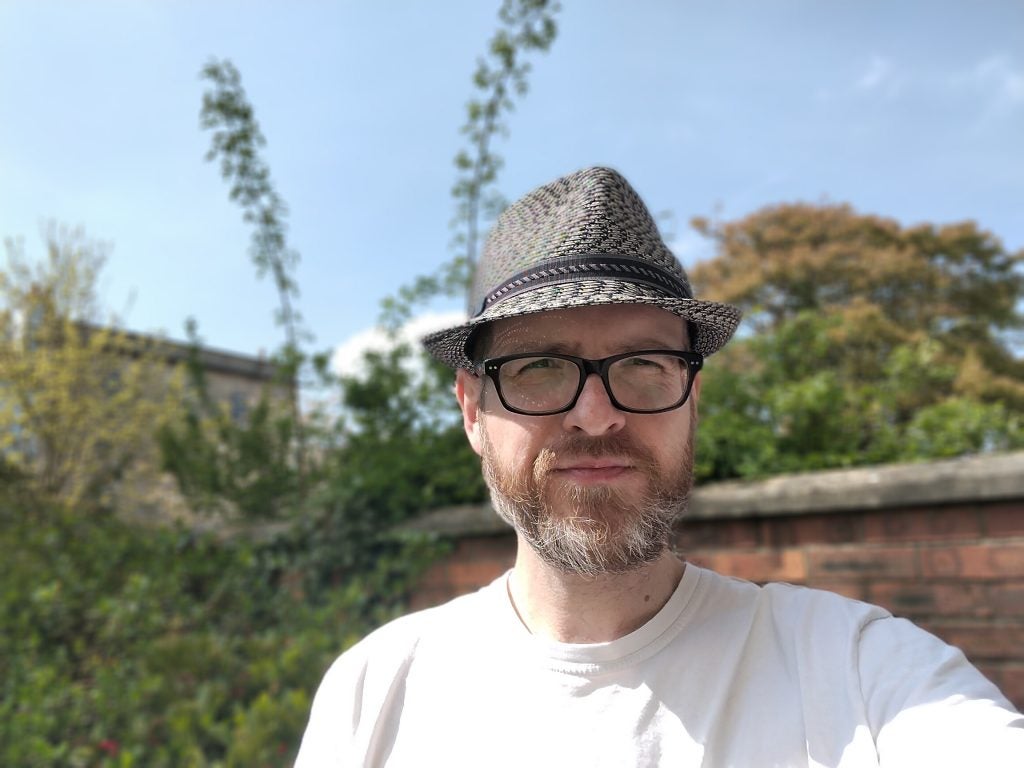 You don’t expect razor-sharp performance at this price, but we’re now at the point where the base experience of unlocking, flipping through homescreens and menus, and hopping between the usual apps needs to hit a base level of fluidity.

Unfortunately, the Nokia 5.4 just doesn’t measure up. It uses a lower-mid-range Snapdragon 662 in conjunction with 4GB of RAM, which is a modest if reasonable setup. It’s the same chip that powers the aforementioned Moto G30 and the Moto G9 Power, and it yields a comparable Geekbench 5 score.

But in the hand, everything feels a little too wallowy and stuttery. Perhaps I’ve been using too many high-refresh-rate smartphones recently, but there’s simply no flow to using this phone.

As I’ve already mentioned, unlocking it can take an age, and flicking between homescreens feels juddery and stilted. I’ve warned against completely buying into the 120Hz promise of cheap phones before – they never live up to their more expensive counterparts – but the opposite end of the spectrum is the Nokia 5.4, which doesn’t even seem to nail a solid 60Hz experience.

When it comes to PUBG, you can expect most advanced 3D games to run okay on low to medium settings. PUB Mobile will recommend the low-end resource pack when first booting up, and can then be played on Balanced/Medium – just one rung up on the graphical settings ladder. It runs fine at that modest level, if not massively fluidly. 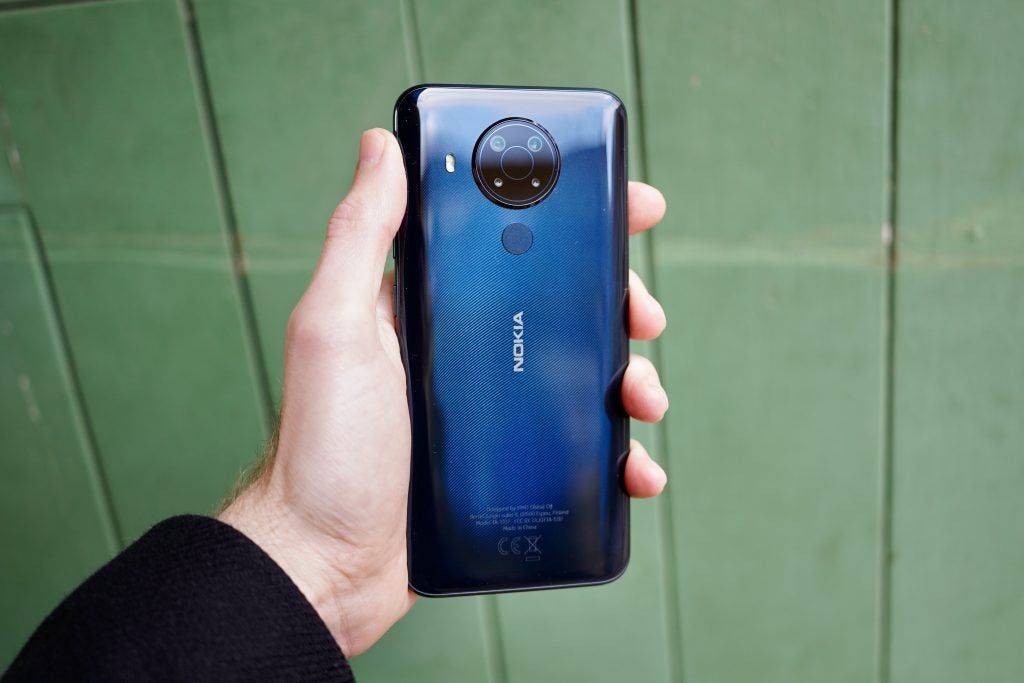 You get 64GB of storage here, which is fine for the money. Although it should be noted that many phones in the sub-£200/$300 category have started providing 128GB as standard, such as the Moto G9 Power and the Poco X3 NFC. Still, there’s at least a micro-SDXC slot here, so there is potential for expansion.

The Nokia 5.4 is powered along by a 4000mAh battery. That wouldn’t provide any great reason to celebrate in a better-specced phone, but given this handset’s modest 720p display and meagre processor, it isn’t a bad provision by any means.

It will easily survive a day of moderate use, and take you well into a second. Power users will see that figure dropping to a day, but then this really isn’t a phone for power users. Its screen and processor does no favours to video and gaming content.

Still, if you really want strong stamina at this sort of price, then the Moto G9 Power with its 6000 mAh battery is a much better bet. The Nokia 5.4 can’t even get close to this rival budget phone’s figures.

You get a modest 10W charger bundled in the box, which got me from 50% to 54% in 15 minutes, and up to 57% in 30 minutes. That really isn’t very fast – especially when the likes of the Poco X3 Pro and the Realme 7 give you significantly faster 30W+ chargers.

But that no longer feels like enough in today’s competitive budget market, where one or two stand-out features aren’t uncommon. This is a phone that completely underwhelms with its drab screen and sluggish performance, while an improved camera can still only manage acceptable wide shots in good lighting. It isn’t a bad phone by any means, but the Nokia 5.4 simply fails to shine with any of the basics.