It may not be much of a looker, but the Poco X3 NFC sure is an over-achiever. Offering class-leading performance, great stamina, and a silky 120Hz display for a scarcely believable price, it’s one of the smartphone bargains of the year.

Xiaomi’s Poco smartphone sub-brand has made a real impact with its ability to offer eyebrow-raising performance at a low price. The Poco X3 NFC continues that good work.

Earlier in 2020, the Poco F2 Pro gave off distinct early-OnePlus vibes with its mixture of flagship performance and a sub-£500 price tag. It made a number of very good Android phones look somewhat overpriced.

At just £199, the Poco X3 NFC looks to do the same for the budget brigade. Should Motorola be nervous?

While the Poco X3 NFC has a number of fine qualities, refined design isn’t one of them. It’s well built, but slightly bland to look at.

You certainly know when you’re carrying it, with a significant weight of 215g and a 9.4mm-thick chassis liable to make any pocket droop.

Nor is there an eye-catching finish to the phone’s plastic rear, of the type you get with the Xiaomi Redmi Note 9 or the Oppo Reno4 Z. Instead, there’s a fairly ugly band of diagonal lines into which a huge Poco logo is etched out.

Typically, I don’t give bundled-in cases more than a cursory glance, but you might want to consider using the clear silicon example that comes with the Poco X3 NFC. The phone sports a hugely prominent camera module, which the case mitigates with a large circular lip. Subtle it isn’t, but it should prove effective at warding off those inevitable dings. 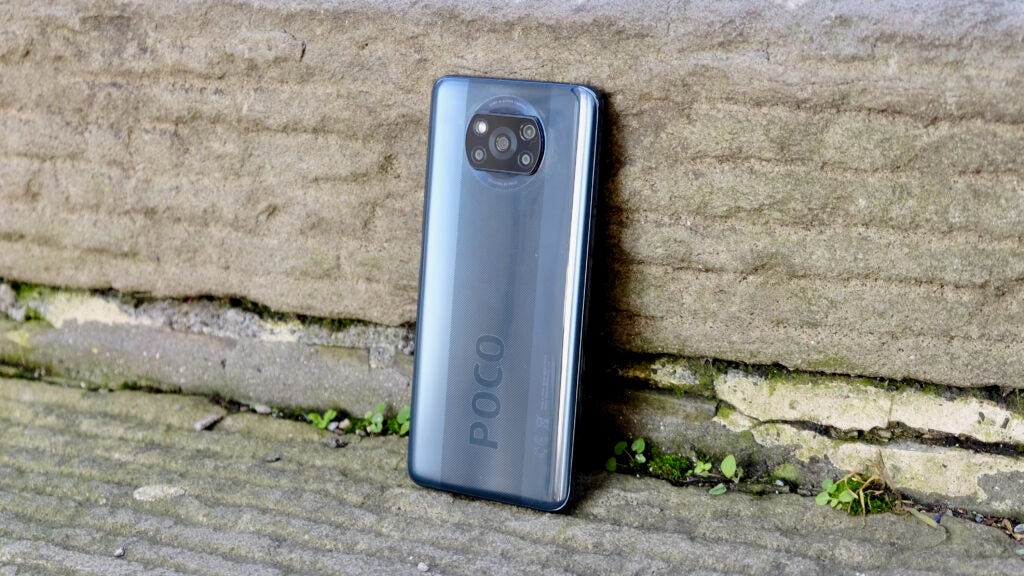 Utilitarian design aside, the Poco X3 NFC has some stand-out features for its price. It isn’t too unusual to see a side-mounted fingerprint sensor, and this one isn’t the speediest you’ll encounter. But how many phones these days have an IR blaster? This phone does, allowing you to use it to control your TV and hi-fi.

Indeed, those concerned with audio are particularly well served here, with both a 3.5mm headphone jack and stereo speakers included. The former isn’t particularly unusual in a £200 phone, but the latter most certainly is. Gamers on a budget take note.

Now, the Poco isn’t alone in offering such a spec for an affordable price. The aforementioned Oppo Reno4 Z packs one, as does the Realme 7 5G. But both of those phones are a little more expensive than the Poco X3 NFC, and it still isn’t a normal thing to see so far south of £500. 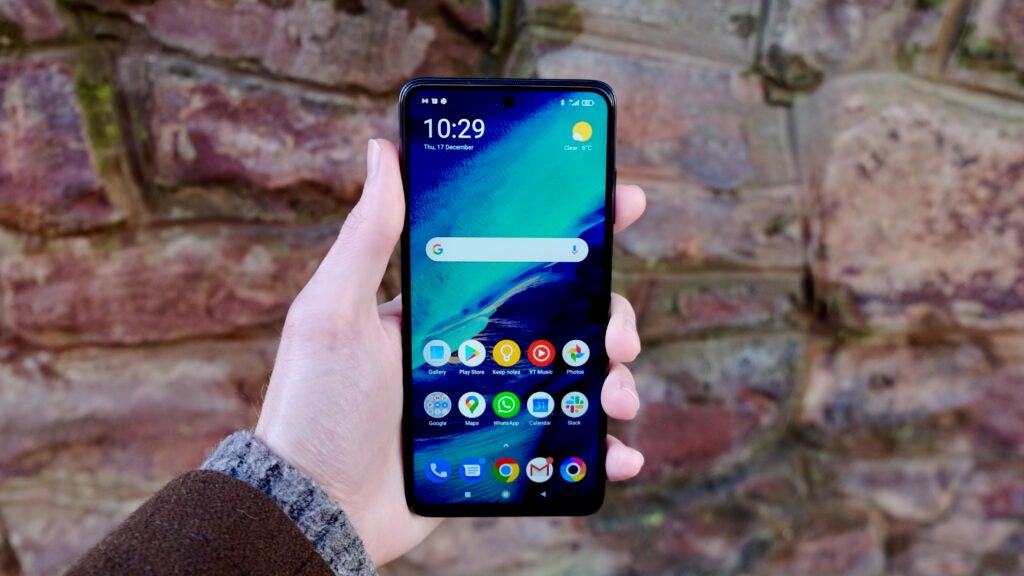 I still find that the impact of a silky-smooth 120Hz display is somewhat dulled when it’s framed and driven by more modest hardware. The extra punch of OLED will always be missed, and the limitations of the phone’s silicon will still result in slight pauses when carrying out tasks such as web browsing.

But let’s not be too churlish here. Having such a rapid display available for just £199 is a reason to celebrate, and it makes navigating through the phone’s homescreens and menus feel quite luxurious.

We’ve already hinted that the Poco X3 NFC might be well suited to gamers on a budget, and that’s a point driven home by the handset’s excellent performance.

Xiaomi has managed to include a Snapdragon 732G CPU here, which is considerably more capable than the silicon employed by rival devices. The Redmi Note 9 (from another Xiaomi sub-brand) uses the insipid MediaTek Helio G85 CPU, while the Motorola G8 runs on the lesser Snapdragon 665.

An average Geekbench 5 multi-core score of 1769 trounces both by around 400-500. This translates into smooth performance when zipping around the Poco’s menus. 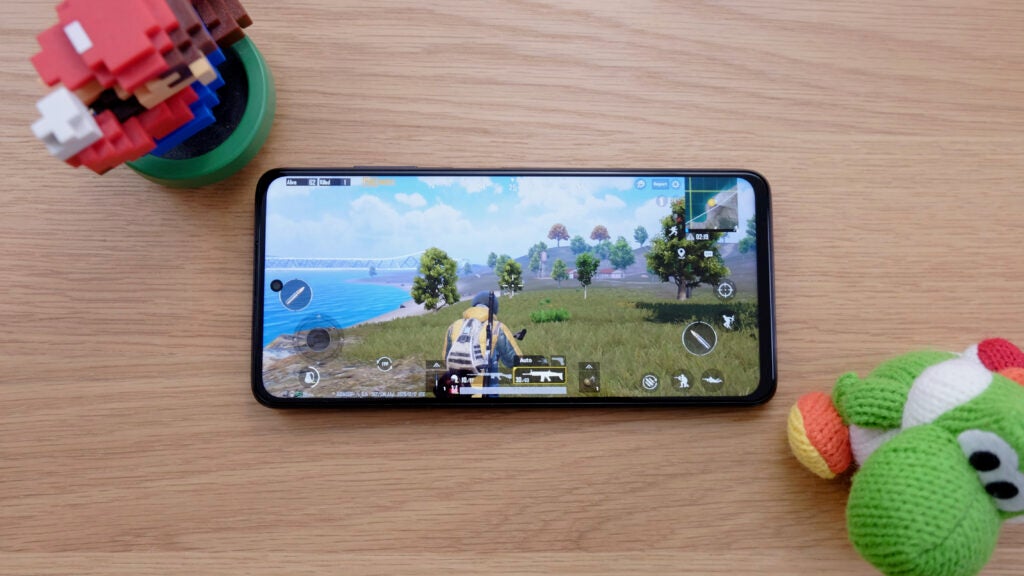 But back to those games – the Snapdragon 732G also packs a much meatier GPU than the Snapdragon 865, and that results in an all-round competent gaming experience that you don’t always get for this sort of money.

PUBG Mobile defaults to High Frame Rate and HD graphics, which is impressive for a phone at this end of the market. And it follows through on those settings with a smooth, sharp Battle Royale experience.

The Poco X3 NFC nominally packs four cameras onto the back of the phone, although as is often the case with affordable phones, there are only really two of note. 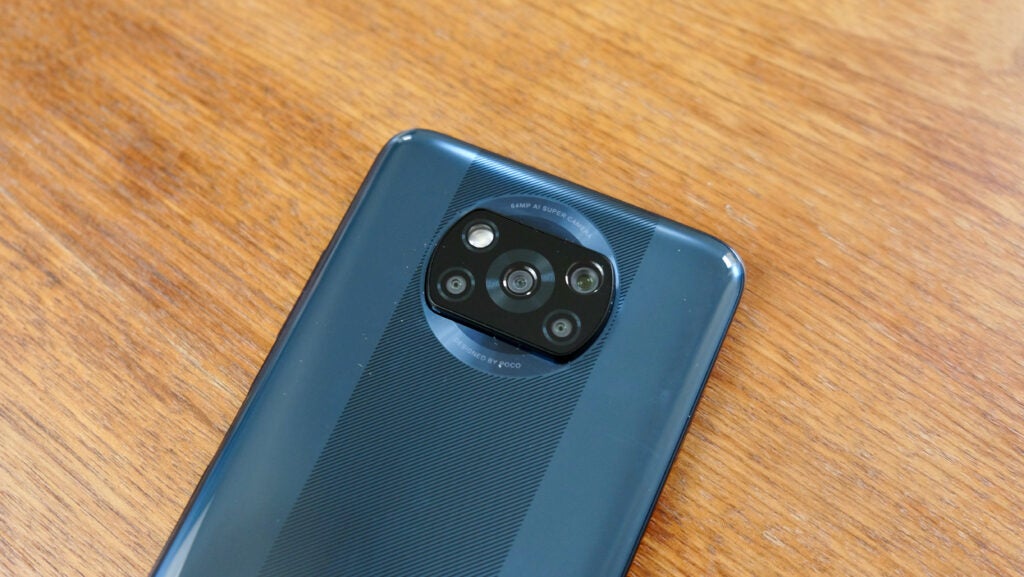 There’s really not all that much to say about the latter two, other than the fact that they’re fairly inconsequential. However, the main two sensors are quite a bit sharper than you normally get for the money.

In practice, you get nicely balanced images in good lighting from that main sensor. Ultra-wide shots show a marked drop in vibrancy and sharpness by comparison, but are more usable than those taken on many cheaper phones.

I captured a number of shots across a couple of bright winter mornings, and early evenings just before sunset, and was pleased at how the Poco handled the distinctive ambience created by the low, weak sun. 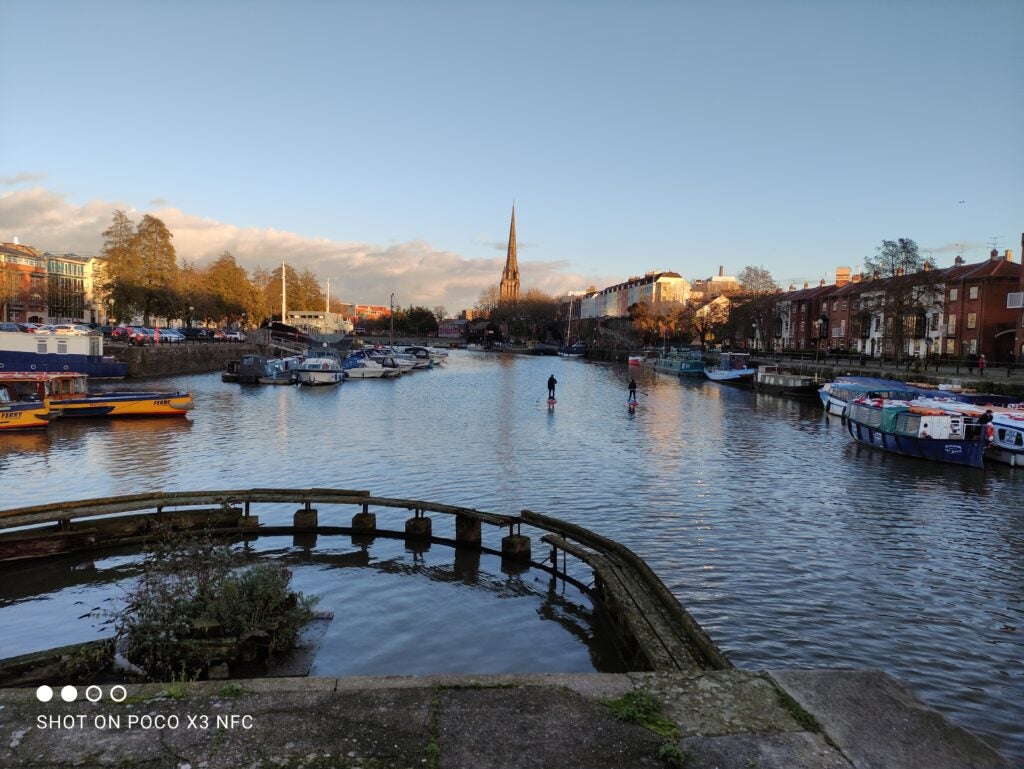 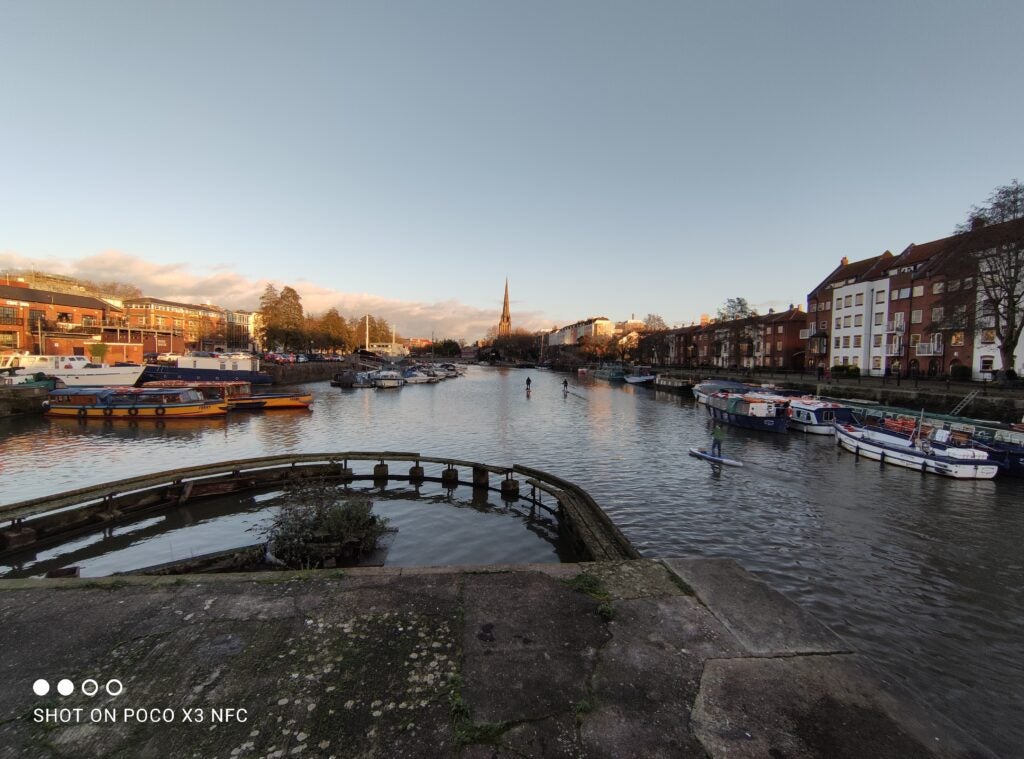 It did struggle a little with overexposing certain background elements, as is normal at this end of the market. In general, though, the results were decent.

Even 2X shots look okay here, despite the lack of a dedicated telephoto. You can thank that 64-megapixel main sensor for that, which allows the X3 NFC to crop in without too much loss in detail.

You could really pick these images apart if you zoomed right in, but we’d suggest that if you’re prepared to do so, you should perhaps be shopping a little higher in the market. The overall impression is a positive one, and the Poco X3 NFC will handle your social media posts and incidental snaps comfortably. 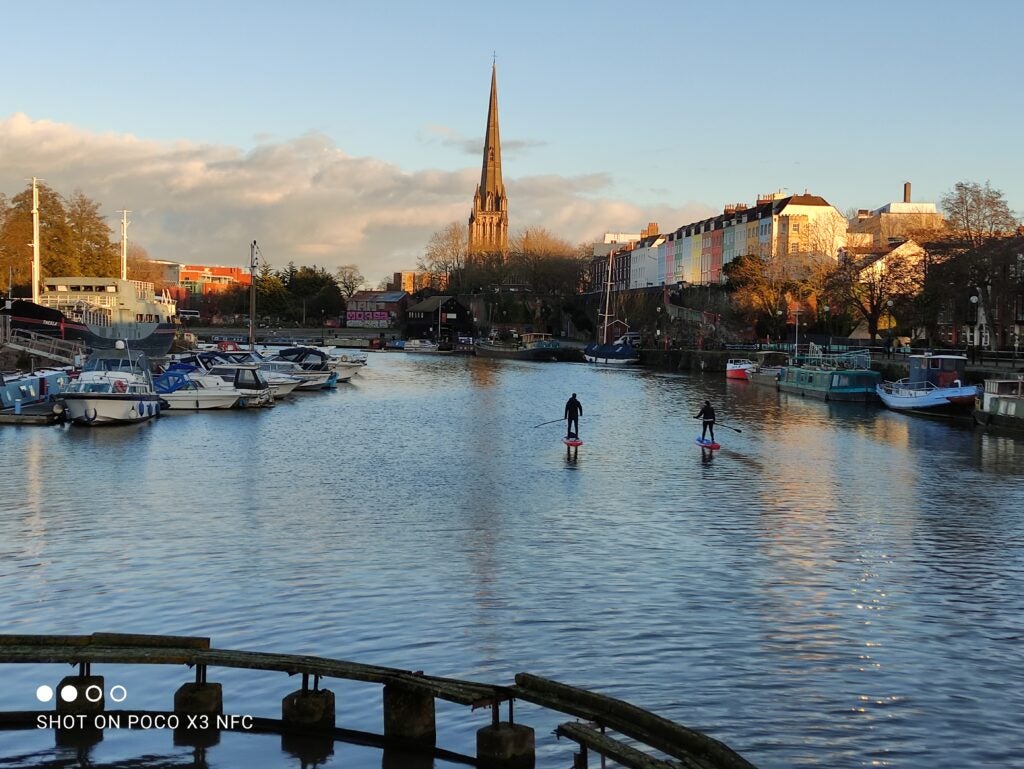 A Night mode is included, too, although without OIS these shots are rather crudely brightened affairs – and they take several seconds to process. Again, for the money, it’s a pretty effective tool, but don’t expect low-light miracles. 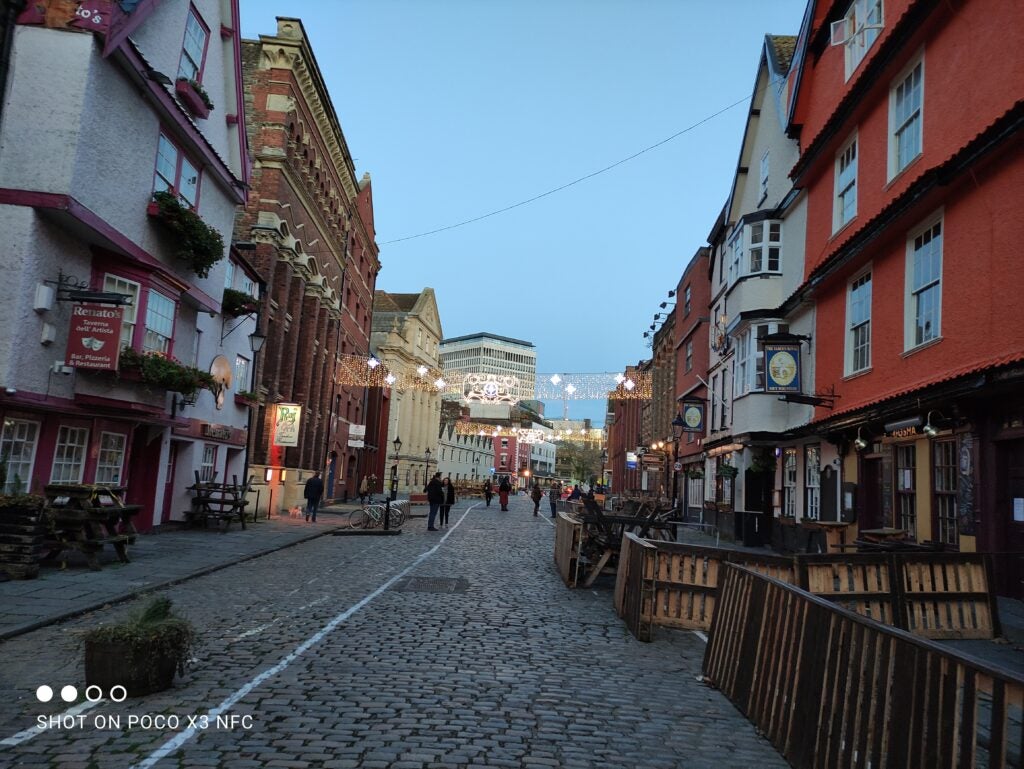 Xiaomi’s MIUI 12 runs on the Poco X3 NFC, and while it isn’t my favourite custom Android 10 skin, it’s perfectly pleasant to use day to day.

It isn’t free from bloatware, with an assortment of Xiaomi apps clogging up the homescreen. We could take or leave (preferably leave) the likes of Gallery, File Manager, Themes, Cleaner, Music, Mi Video, Weather, Notes, and Xiaomi’s own Mi Browser. The latter, of course, is completely superfluous with Google Chrome also preinstalled.

Talking of the big G, its apps are sequestered away inside a separate folder. You also get a folder with half a dozen or so third-party apps, ranging from the obvious (Facebook and Netflix) to the somewhat niche (WPS Office and LinkedIn).

MIUI’s Tools folder gives you a bunch of limited but useful single-purpose apps, such as Calculator and Clock. And in keeping with the Poco X3 NFC’s gaming capabilities, there’s a Game Turbo app that augments your gaming experience with various optimisations and do-not-disturb features. 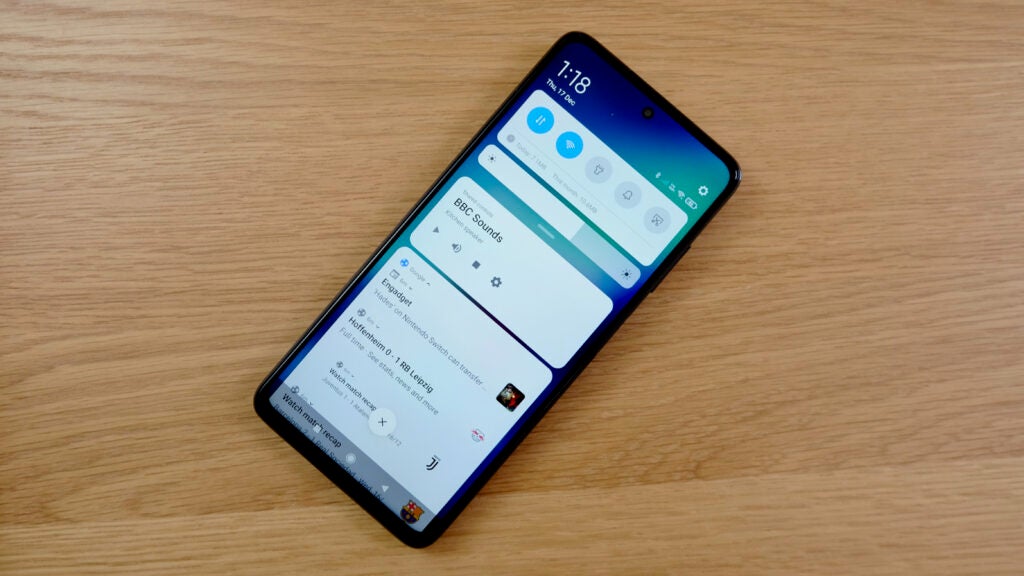 MIUI is much improved

One aspect of this UI I really didn’t like was its habit of taking you to a separate screen – complete with an ad – every time an app completes its installation. It’s highly annoying, especially when you’re in the middle of something.

Say what you will about MIUI’s slightly artless look, but it’s thoroughly customisable. You can resize and rejig the icons, adjust the layout, choose from lots of custom themes, and more. Credit to Xiaomi for not adding an ugly custom widget screen to the left of the home screen, too. It’s Google Feed all the way, just how I like it.

MIUI is also nice and fluid, except on the odd occasion where the hardware can’t quite keep up with that 120Hz display. It’s nothing drastic, and likely nothing that the software would be able to help much with, but you can tell you’re not dealing with a true flagship here.

A 5160mAh battery sees the Poco X3 NFC coping well with the day-to-day grind. If you largely restrict your use to mundane tasks such as messaging, calling, and the odd bout of web browsing, or if you drop the screen refresh rate to 60Hz, you could quite easily get two full days out of it.

Flip the switch on the 120Hz and hit the media, however, and you’ll see that battery meter drop a little quicker. An hour of Netflix, with the screen brightness set to max, drained 11-13% in my tests.

This isn’t brilliant compared to most phones at this end of the market. The Vivo Y70 – as bog standard a phone you’re likely to find – loses just 8% under similar conditions. Of course, that phone can only get you a 60Hz display refresh rate.

A better comparison would be the Realme 7 5G, which has a similar combination of low-end processor, 5000mAh battery and 120Hz display; it also loses around 11% in this test. The Oppo Reno4 Z, which pairs a 120Hz display with a much smaller 4000mAh battery, loses a whopping 15-16%. So the Poco isn’t doing all that badly within this subsection of affordable 120Hz phones.

Should you buy the Poco X3 NFC?

If there’s a sub-£200 phone that offers as potent a package as the Poco X3 NFC, we’ve yet to see it.

If you’re a gamer looking for a cheap phone, or if you want to extract every last ounce of performance and features for your £200, the Poco X3 NFC is the one.