Chunky, chinny, and notch-heavy, even with its clunky design, the Moto G30 is still a cracking low-cost smartphone for a certain type of user. Sitting alongside the Moto G9 Power and offering a slightly smaller, significantly more iridescent alternative with virtually identical innards — the fact it costs less and offers more is its saving grace.

At £160/€180/$TBC, there’s plenty of competition for Motorola’s latest plastic fantastic budget phone, the Moto G30, but hardly any of it packs 128GB storage or a 90Hz screen.

While the Moto G30’s design may be Marmite at first sight, it is certainly one of the best cheap phone options thanks to a selection of strong specs and a low price.

The G30’s main competition comes in the form of the pricier Realme 7, a faster charging option only available online in the UK, and Motorola’s own G9 Power. While the G9 Power underwhelmed us with its performance does the Moto G30 strike the right balance?

Somewhere between an oil slick and a unicorn, the G30’s design shimmers confusingly

Motorola’s budget phones have never been design leaders, and the G30’s no exception, but it definitely feels like a standout looking device. Its plastic back is fantastically fingerprint repellant, thanks to its matte sheen, but it’s also confusingly Marmite in its finish.

Iridescent, our Dark Pearl version has an oil-slick-a-like shimmer and depending on how you’re holding it, the Moto G30’s back looks either a slightly dirty pink, or a slightly dirty green, with sparkles thrown in for good measure. It’s also available in Pastel Sky for a more traditional shimmer pink look. 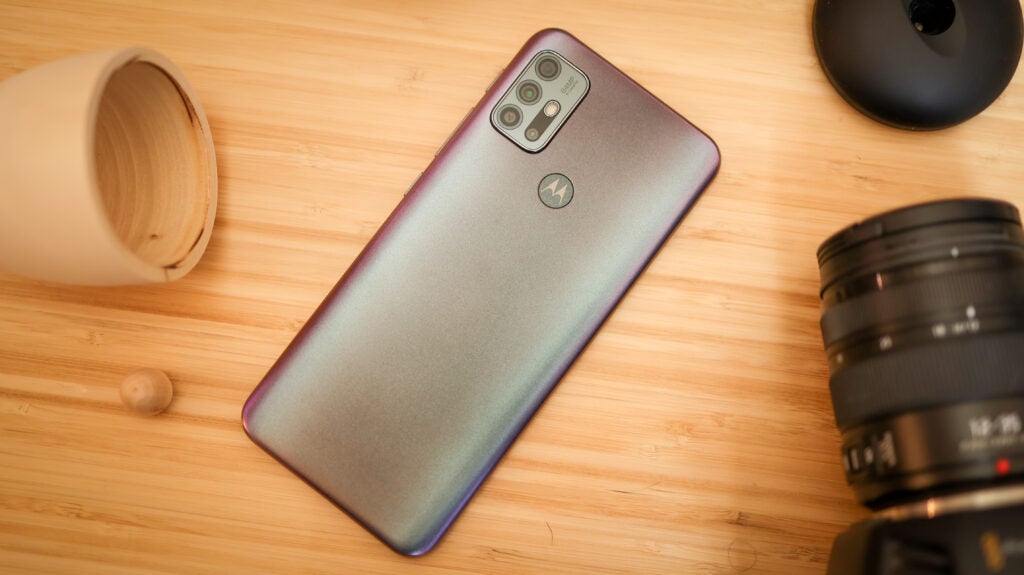 The Moto G30’s back wraps around the sides of the phone, which play host to a USB-C port and speaker at the base, a headphone jack at the top and power, volume and Google assistant buttons to the right.

The phone weighs 197g, so not quite iPhone 12 Pro Max levels of weighty, but still, substantial given there’s no glass or metal around the back weighing it down.

It’s relatively thick too, but on the plus, feels solid. With an 82.2% screen-to-bezel ratio, the Moto G30 doesn’t look bad, but its big chin and notable water droplet notch feel dated when set aside punch-hole camera competition like the cheaper Oppo A52.

While the Moto G30 can’t boast IP68 water or dust resistance, it is IP52 water repellent, and with a microSD card or second SIM slot within, and a fingerprint scanner around the back, there are some highlights dotted around its robust body.

The Moto G30 has a perfectly adequate screen with one flourish of excellence: its 90Hz refresh rate. At its £160/€180/$TBC price, we aren’t expecting OLED technology, so the IPS LCD panel stacks up well against the competition.

Punchiness is at a premium when it comes to low-cost displays, as are inky blacks, so you’ll instantly know you’re using a sub-£200 smartphone when you fire up the Moto G30, but once you get past your OLED FOMO and lean into the IPS experience, everything from Netflix to websites look as good as they need to.

Brightness levels are adequate, but won’t blow your mind, especially in sunnier scenarios. Automatic brightness is supported and a quick dive into the settings reveals a host of colour options, ranging from natural to boosted and saturated. 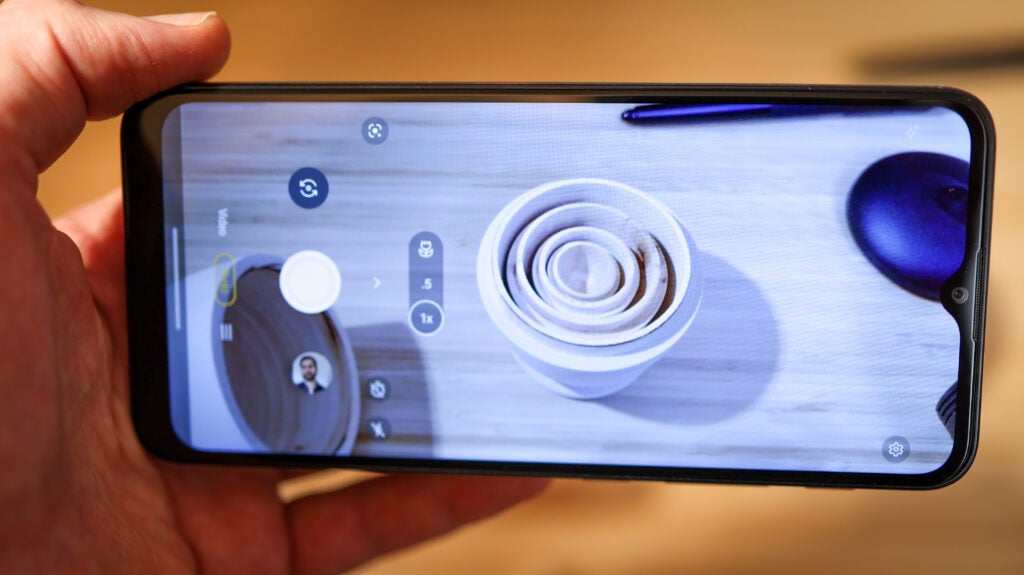 With a tall 20:9 aspect ratio, the G30’s display is well-suited to widescreen content and split-screen multitasking, but its height combined with the phone’s heft will leave your thumb stretching unless you have giant hands. In turn, small phone fans should look elsewhere.

A 90Hz refresh rate does make a difference, and the Moto G30 feels faster than the G9 Power which sports a 60Hz panel, despite the fact they feature the same innards. What’s more, the G30’s responsive to the touch, and a tad sharper than Moto’s pricier battery champ too.

Performance – For the price, the Moto G30 is as powerful as it needs to be

The Moto G30 is powered by a Qualcomm Snapdragon 662 chipset, and while it isn’t a headline grabber, for the price, it delivers a smooth experience, especially given that 90Hz display and the illusion of speed it delivers.

The G30 packs 4GB of RAM. That’s just about the minimum spec for running Android well these days, and all apps I ran operated well. There’s a bit of waiting for photo processing and occasional UI swiping as a but this never turned into force closes or failures to launch.

Gamers take note, the Moto G30 will probably run your favourite games, but not at high graphics settings. Injustice 2 gave us a throwback to PS1 levels of artefacting, and PUBG ran at Balanced/Medium graphics settings. 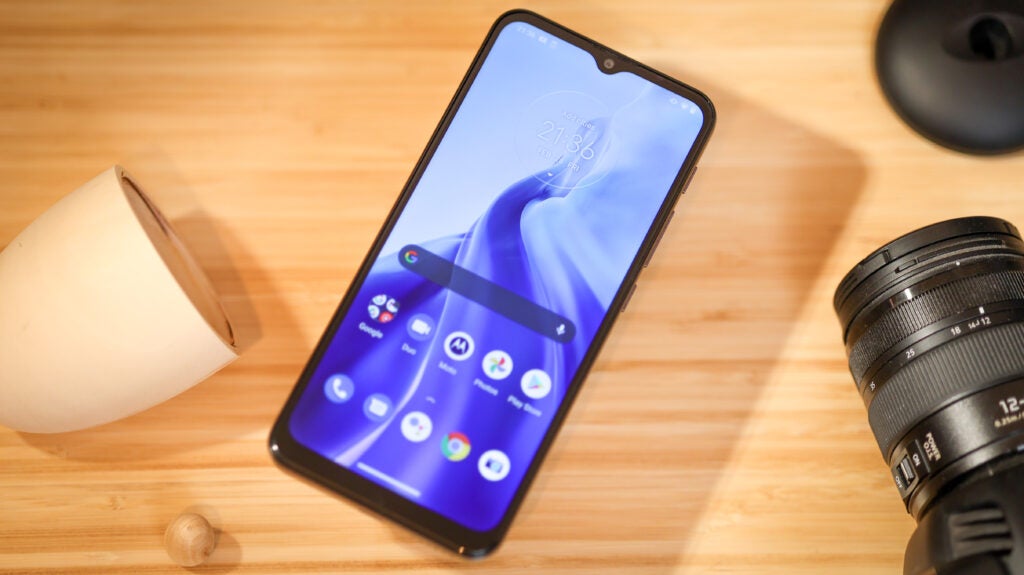 If you can handle Xiaomi’s MIUI interface, the Poco X3 NFC is amongst the best Android phones you can buy in the price region, with its 120Hz display and mightier specs, though it is a fair bit more expensive if it isn’t on offer.

The G30 does serve up 128GB of internal storage, which should be ample for most, and you can supplement it with a microSD card too.

Motorola’s crammed four cameras around the back of the G30 but you’ll only really get decent shots from one of them.

Spearheaded by a 64MP main camera with an f/1.7 lens and a 26mm wide-angle, for the price, it’s hard not to coo at big numbers like that. Second in command is an 8MP ultrawide camera with an 8MP resolution, an f/2.2 lens and a 118-degree field of view. Finally, there are two forgettable 2MP cameras, a depth sensor and a macro camera.

Shooting 16MP snaps by default, the G30 combines four pixels into one to create a sharper shot with better noise handling and dynamic range than a full-resolution photo. The results are good for the most part, especially if you don’t mind waiting a second to see your snaps.

Photos taken in well-lit scenes pack stacks of detail, dynamic range is impressive with auto HDR firing up all by itself, and it even handles notoriously tough subjects like black cats respectably. 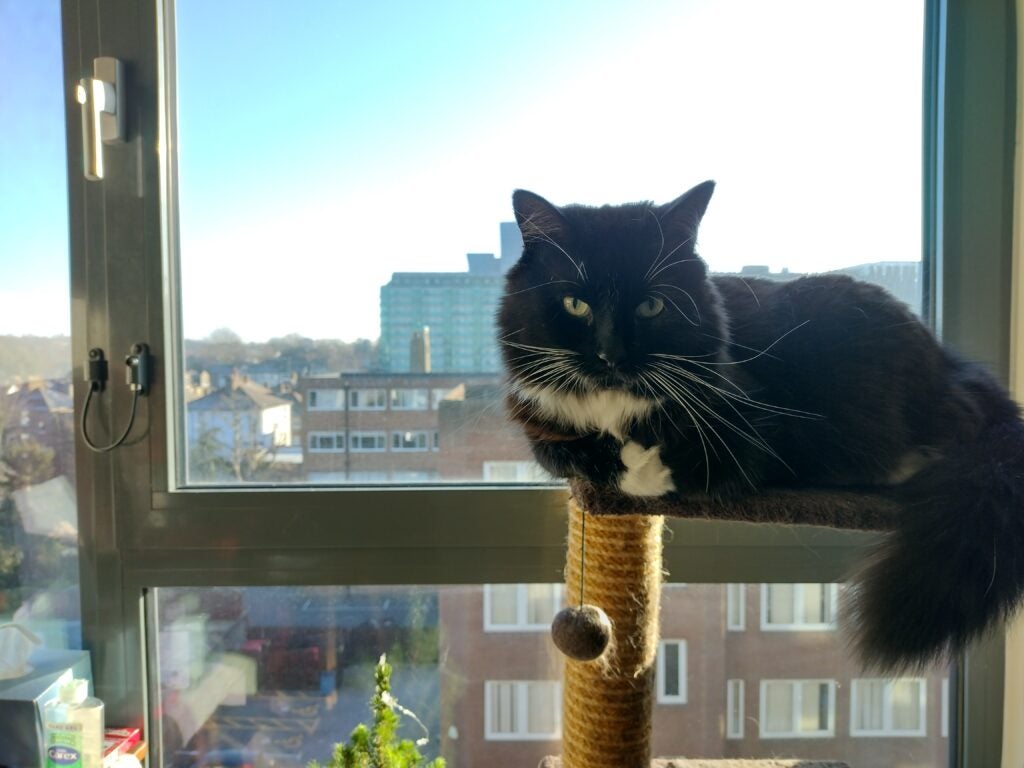 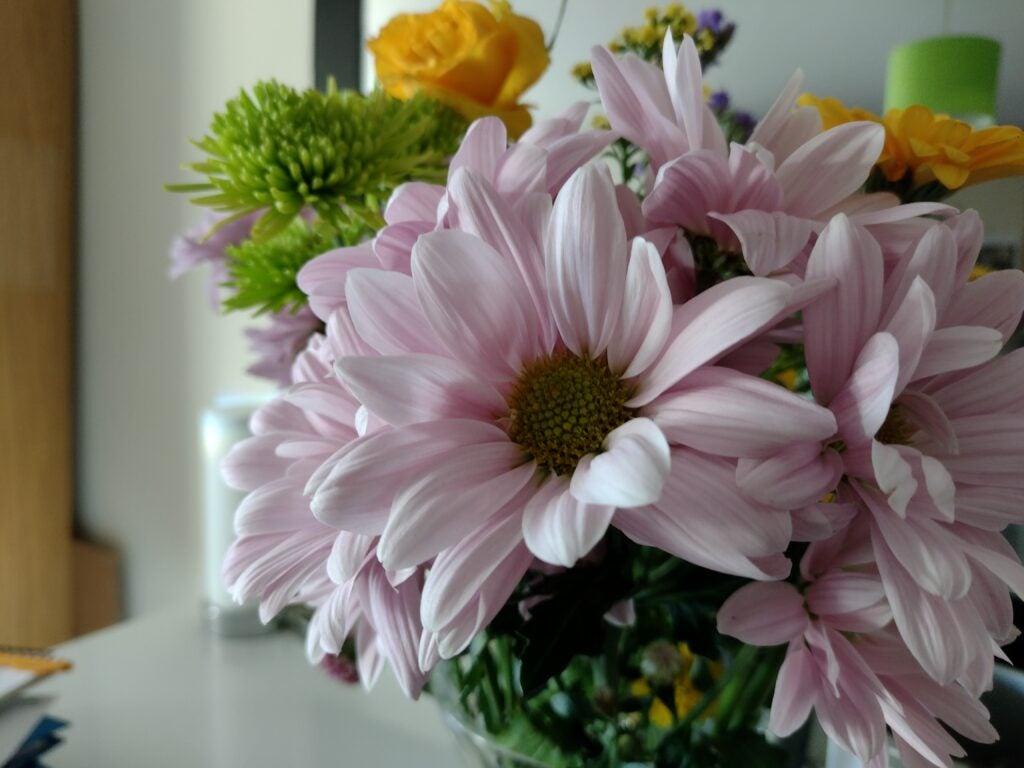 Once the lights drop, so too does clarity, with night mode resulting in softer shots, and blurry ones when hand shake or a moving subject are introduced to the mix.

Motorola’s improved its processing and photo capture algorithms, but the camera still has its weaknesses. 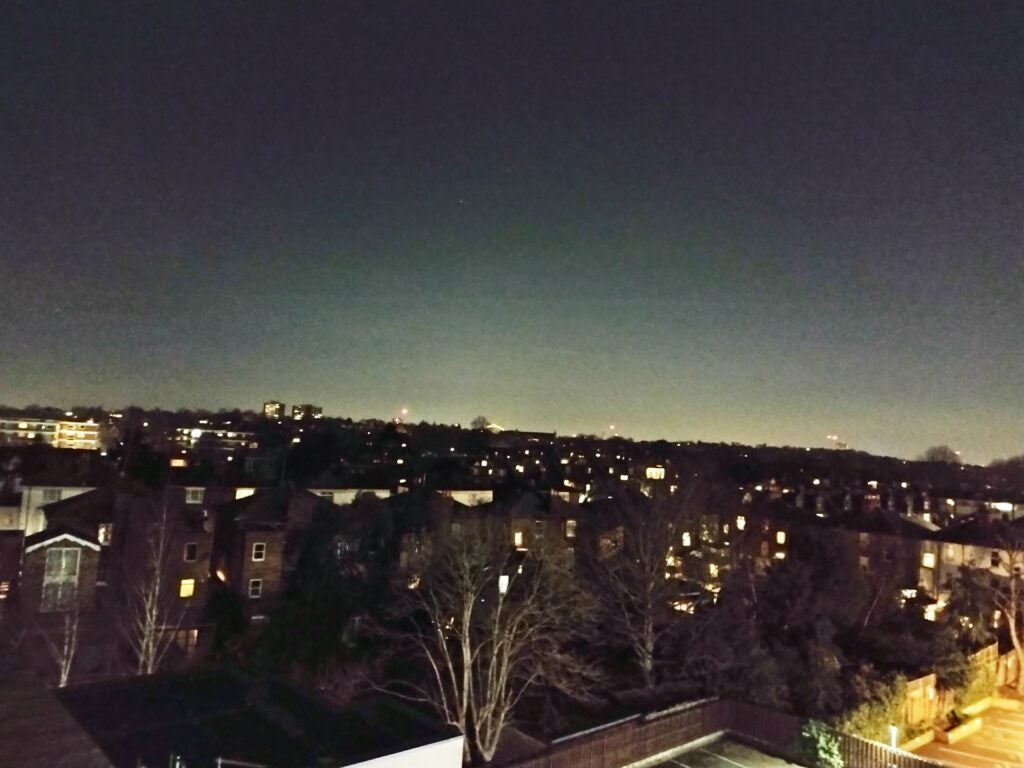 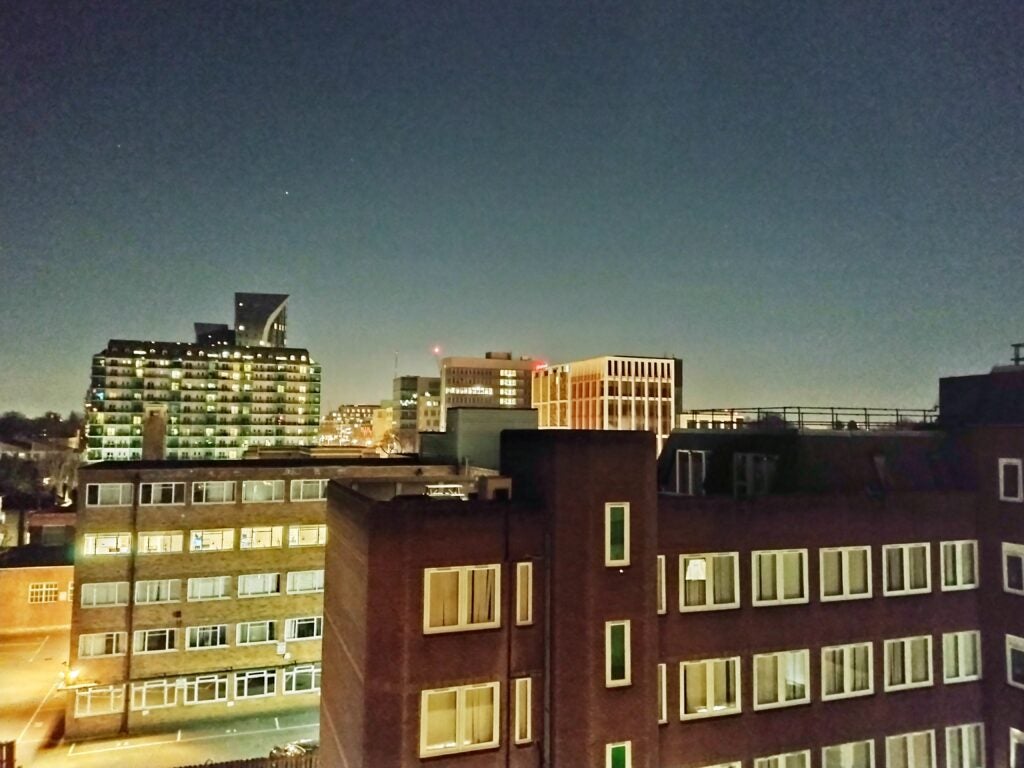 The ultrawide camera is another relative weak point, with no autofocus and middling detail. It’s very nice to have in bright scenes, but reminds us of a phone from 2012 when the lights drop. Add to that the fact it’s disabled in night mode, and it fast becomes clear, the ultrawide is a fairweather camera.

As for the macro camera, unless you clumsily fire up the flashlight, its photos will inevitably disappoint. Once you do, if you can stomach the glare an LED light spreads across a scene, it at least delivers crisp snaps for a 2MP sensor.

Wrapping up, the 13MP selfie camera performs adequately in bright scenes but poorly in even slightly low light, needing a super steady hand for a clear shot.

Video is probably one of the phones high points, captured at Full HD and stabilised nicely. Dim the lights and the quality drops, but so long as you stick with the main camera and don’t switch to the ultrawide, it’s competitive.

If a really good, versatile shooter is top of your wishlist then check out our list of the best camera phones.

With 5000mAh of battery power tucked away behind the shimmery back of the G30, it’s little wonder the phone lasts and lasts. Motorola doesn’t get specific with its claims, but simply states “Over two days of battery”, which I can attest to after using it for an extended period.

In addition to a 5000mAh cell, the Moto G30 supports fast charging at up to 15W, though strangely includes a 20W TurboPower charger in the box.

Taking around two hours to charge is anything but nippy these days, but considering it might only need a charge every couple of days takes the sting out of long charge times. 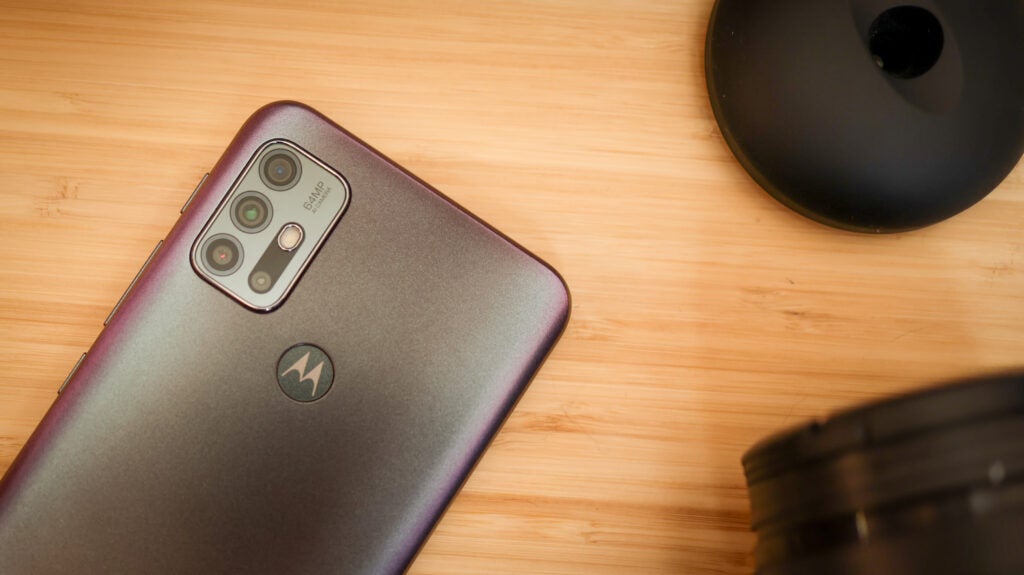 Ultimately, the Moto G30 is one of the better budget mobiles for battery life, and its imperfections can, for the most part, be argued away by its low price.

You should buy the Moto G30 if:

You shouldn’t buy the Moto G30 if