A lot cheaper than its big brother, but with the same app, control and features, the Netgear Orbi RBK752 is a more wallet-friendly entry to Wi-Fi 6 mesh systems. There's slightly less wireless power on offer, but the RBK752 is still extremely fast, offering great range, while the new RBS750 satellite could make a good (and cheaper) upgrade to the RBK852. The only disappointment here is that there are still no parental controls, although Netgear Armor security is available.

Although the first Orbi Wi-Fi 6 system, the RBK852, was powerful and well-featured, the price was enough to put off all but those with the most money and biggest desire to upgrade to Wi-Fi 6. Now the company is back with another mesh system, the more reasonably priced Netgear Orbi Wifi 6 System RBK752.

You lose some features from the top-end system, but the lower price and decent performance makes this a more reasonable system for many.

Externally, the Orbi RBK752 looks very similar to its big brother, although the router and satellite are both slightly shorter (231 x 183 x 71mm). In practice, both systems are about as easy to place as each other. The satellites are neat and unobtrusive and, in keeping with mesh systems, have integrated antennas, so there’s nothing sticking out to ruin their appearance. 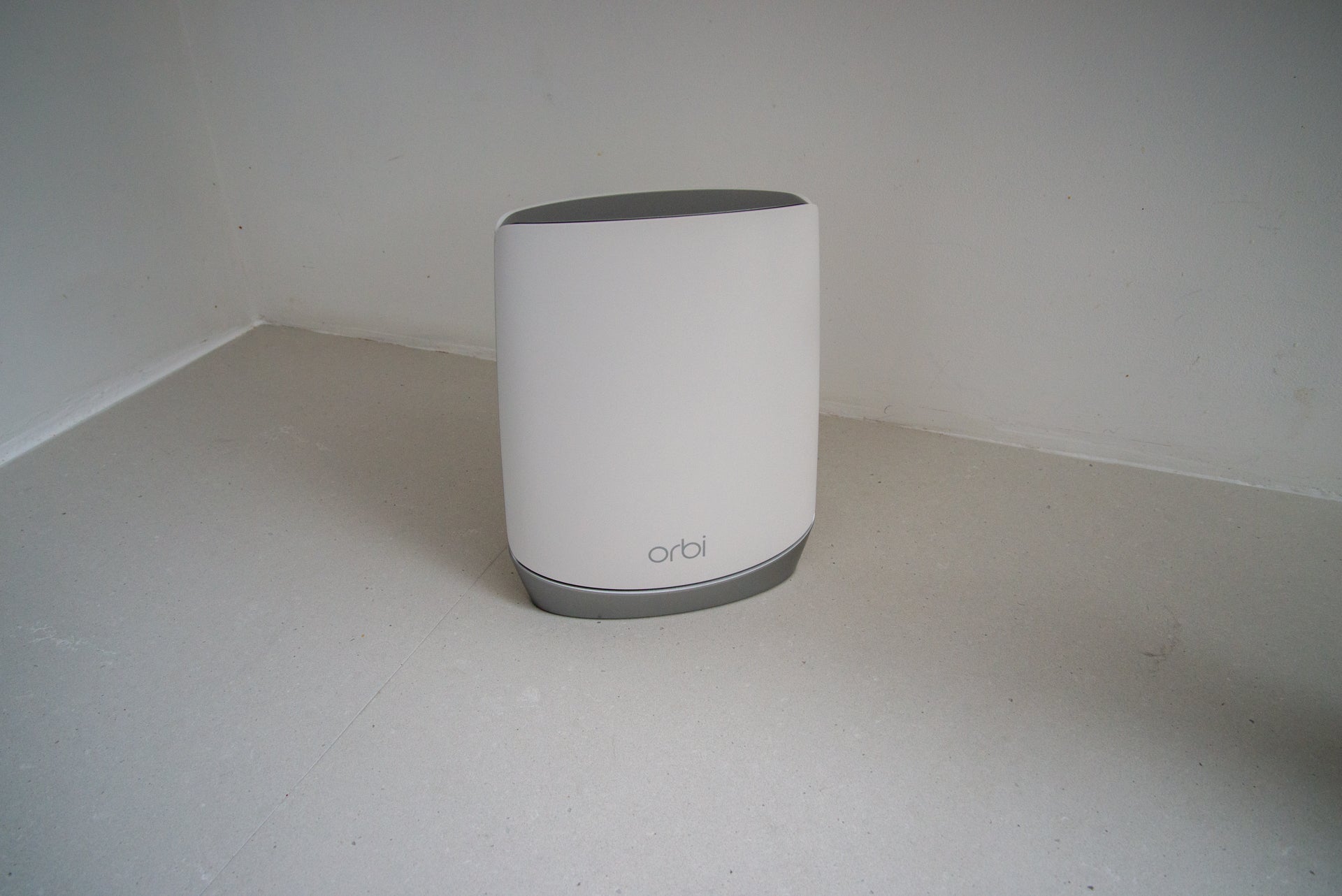 You get slightly fewer ports on this system than with its bigger brother. On the router, you get a single Gigabit Ethernet WAN port, rather than the 2.5Gb port on the bigger system. This router can still cope with the fastest internet connections available in the UK today, and you can use port aggregation with the first Gigabit Ethernet port to support internet speeds of up to 2Gbps. 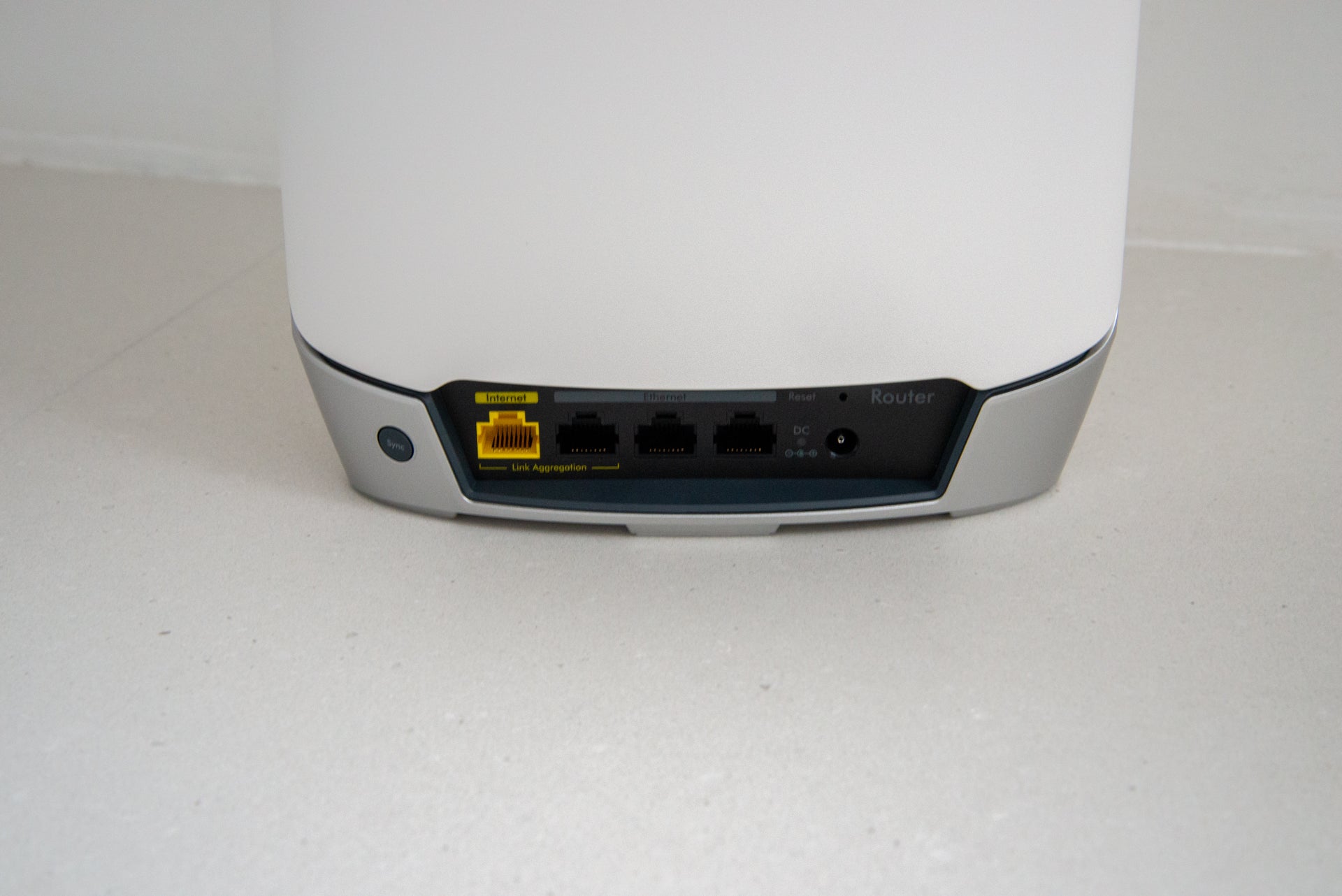 There are three Gigabit Ethernet ports for connecting wired devices, which is one less than on the Netgear Orbi RBK852. Still, this will probably do for most people and you can always add a Gigabit Ethernet switch if you need more devices.

You don’t get any USB ports for connecting external storage, although given how little this feature is used, I don’t think that it’s a huge loss.

The satellite looks identical to the router but has just two Gigabit Ethernet ports for wired devices, although you can also use one for connecting to a wired backhaul if you’re finding that the wireless connection isn’t good enough. 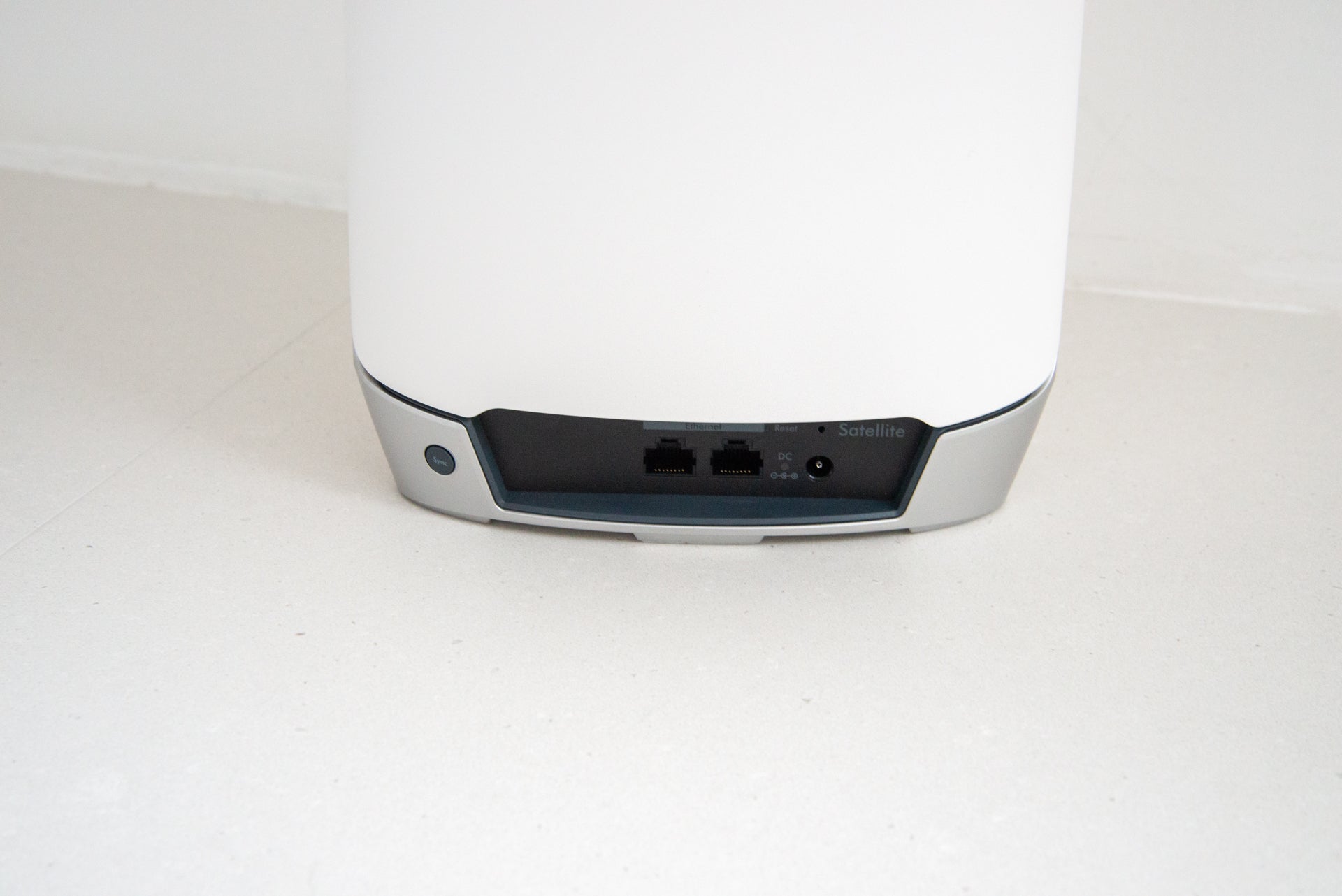 As with all Orbi products, the RBK752 is set up and configured using the Orbi app. This walks you through placing the router and satellite and configuring a secure wireless network. As with practically all mesh systems, the RBK752 presents the 2.4GHz and 5GHz networks under the same names, pushing clients to connect to the best network based on range, performance and features. 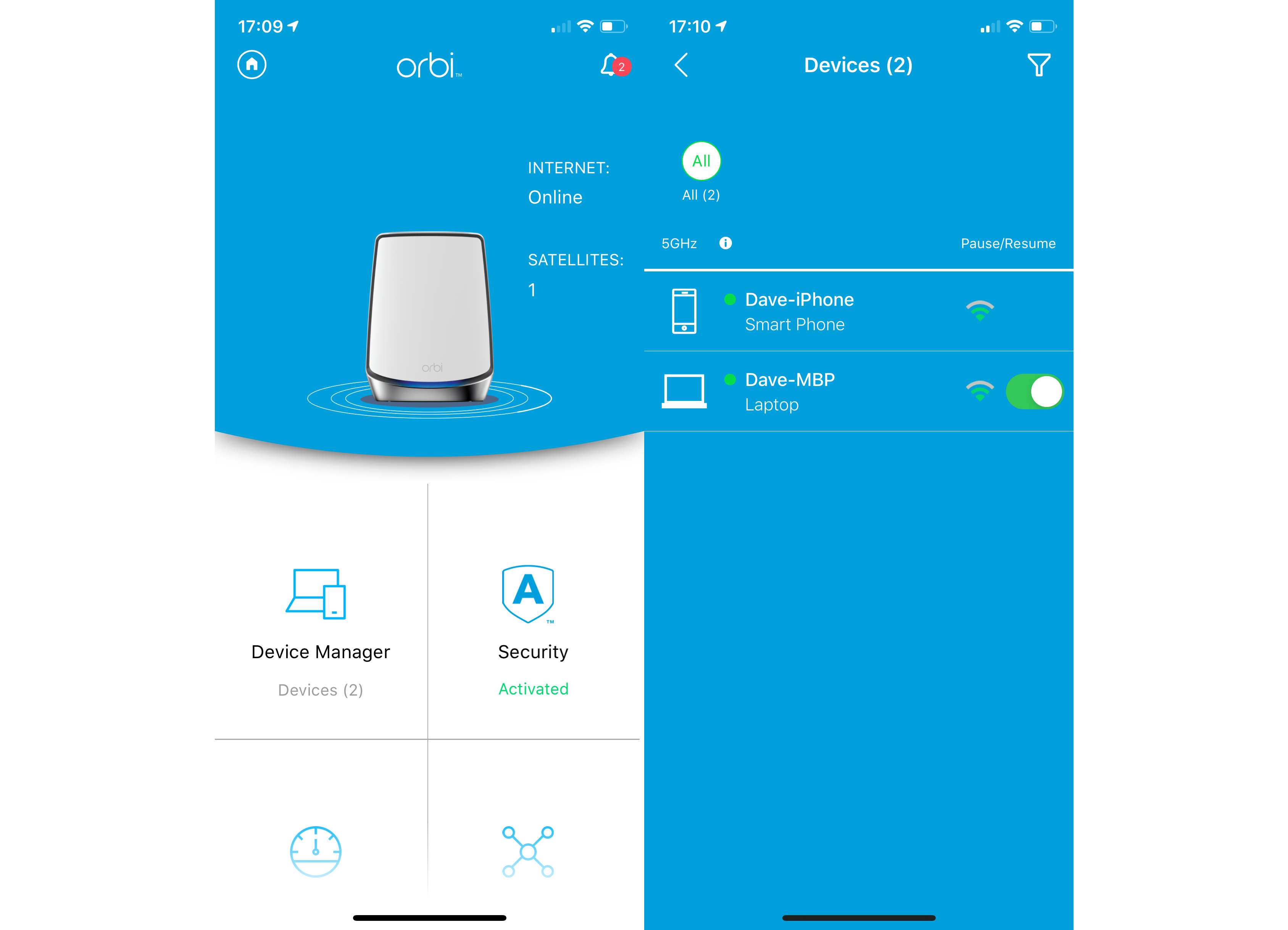 It keeps management simple, as you don’t have to worry about which network to connect to, but those that want more configuration choices are better off with a standalone router.

From the app, you can see connected devices, toggle the guest network, and edit the basic wireless settings: name and password. If you want to change the channels that the 2.4GHz and 5GHz networks run on, then you need to connect to the web-based management interface.

From this interface, you get some more advanced features, including port forwarding controls. This router, however, doesn’t support BT IGMP proxying at the moment, which means that if you have BT TV through a YouView box, you won’t be able to watch streamed channels, such as BT Sport. It’s strange, as this feature is available on the older Wi-Fi 5 Orbi systems and even the newer Nighthawk routers. 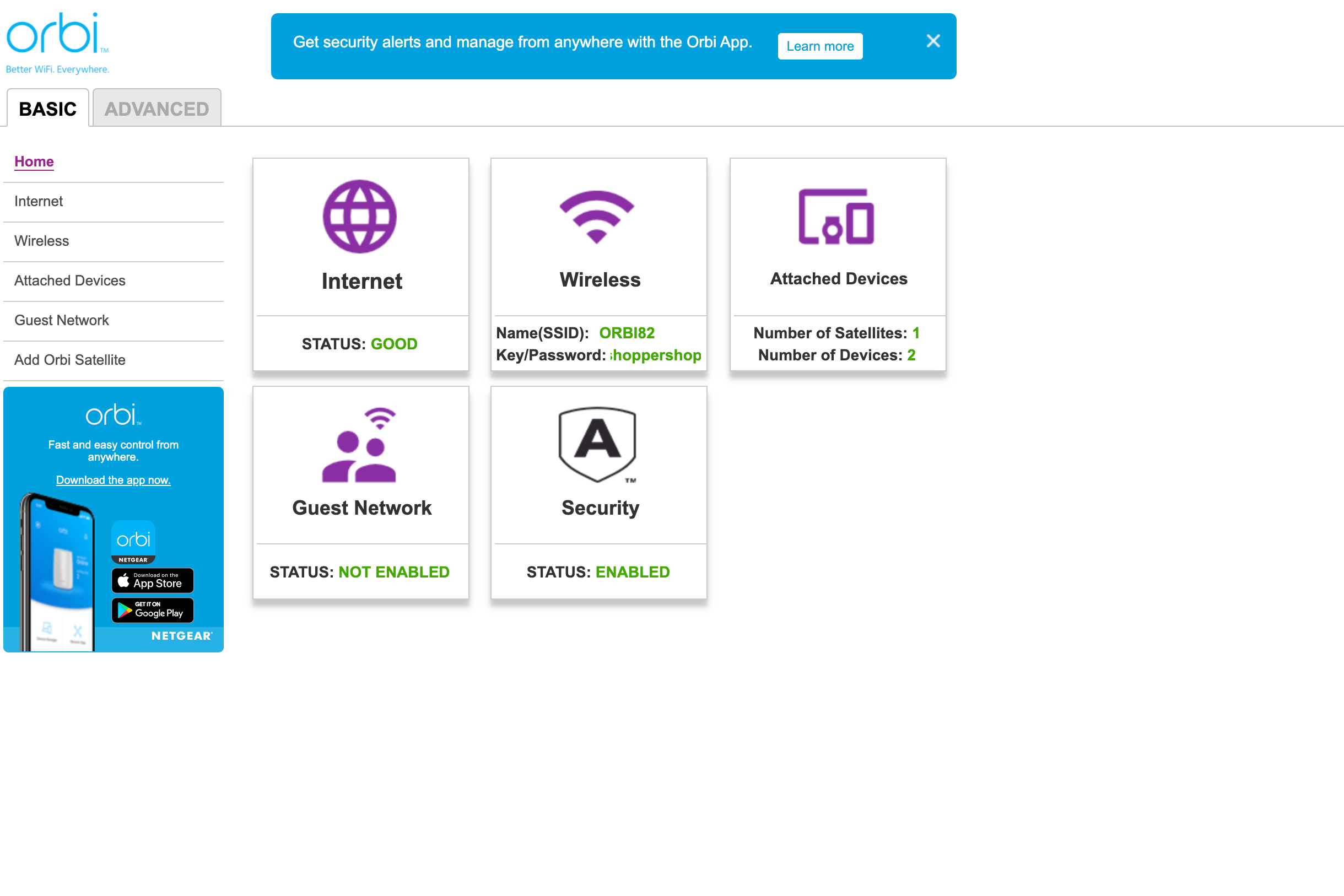 Netgear has enabled Armor on this router, with a free month-long trial. Powered by BitDefender, Armor is designed to prevent attacks on your network, scanning for new threats. For example, it can warn you of products that have default passwords or old firmware. Armor can be powerful, especially given the rise in IoT devices, but it’s another cost to take care of each month, so you may want to disable the service.

It’s a real shame that Circle, the parental control system, still hasn’t been enabled on any of the Orbi Wi-Fi 6 products, as it means that Netgear is losing some ground to its rivals. Without this option, you can only toggle the individual device’s internet access.

The fast backhaul is useful, as it means that you can buy add-on satellites (RBS750) for a cheaper way to boost range on either an RBK752 system or RBK852. Alternatively, you can use Ethernet for the backhaul, which is useful if you want to place a satellite at extreme range, such as in an outbuilding.

While the Wi-Fi specs are reduced, for clients, this system still has eight streams of Wi-Fi 6 split across two devices, which is powerful. If you buy the RBK753, which adds in an extra satellite, then you’ve got 12 streams.

Performance – Fast enough with the ability to give you great range

Testing with a 2×2 Wi-Fi 6 card in a Windows computer, the Orbi RBK752 should technically give similar performance to the RBK852, maximising the full bandwidth available on the 5GHz channel.

In my tests, that proved to be true, with the RBK752 managing decent throughputs of 442.92Mbps at close range, 319.54Mbps on the first floor, and 284.78Mbps on the first floor. That’s just a little way behind the RBK852, although the bigger system still has plenty of streams left for other clients, whereas I was maxing out the bandwidth of the RBK752.

The Asus ZenWifi AX has very similar specs to the RBK752, although the Orbi system was just a touch faster in my tests. 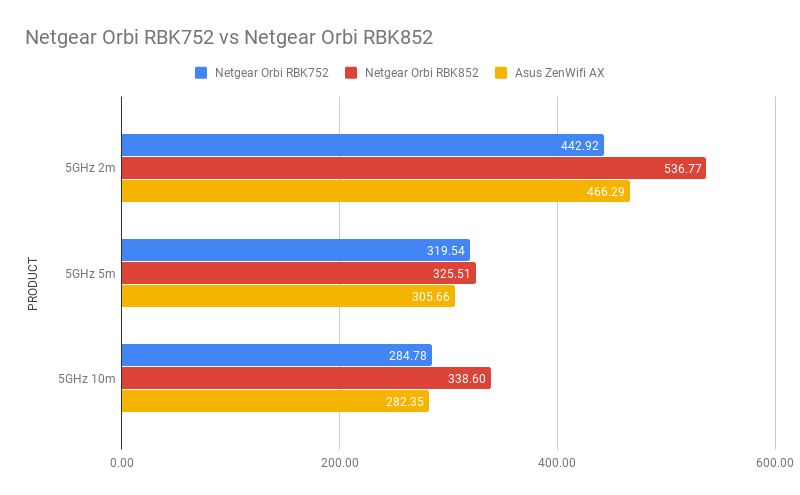 Should you buy the Netgear Orbi RBK752?

Price-wise, the Orbi RBK752 is certainly easier to stomach than its big brother. With a single device for testing, performance was quite similar, although the RBK852 still has plenty of bandwidth left. With both systems, you get the same range of features, so there’s no clear winner in either; it is a shame that neither system supports Netgear’s parental controls at the moment.

The competition has become a lot tougher, too. If you don’t want the hassle of a mesh system and don’t have any particular dead spots to deal with, then the Netgear Nighthawk RAX200 is faster, has a tri-band Wi-Fi 6 network for devices and all the ports that you could want.

If you do have a problem with Wi-Fi punching through walls or interference, then a mesh system makes sense. The Asus ZenWifi AX is the closest rival. This system has parental controls built-in, making it more flexible for now. However, the Orbi will (eventually) get its own parental controls, and Netgear’s range of satellites and app are better.

The Orbi RBK752 is costs a little more than its Asus rival but, even so, I’d buy this system today and hold out for the inevitable upgrades. If you need more range, the RBK753 ships with two satellites.