With its fast performance and highly-configurable networks, the Asus ZenWifi AX is a powerful Wi-Fi 6 mesh system. Given its comparatively low price and excellent range of features, including excellent parental protection controls, this is a great mesh system for anyone looking to upgrade to the latest technology.

The first wave of Wi-Fi 6 devices were exceptionally expensive and while the Asus ZenWifi AX is hardly cheap, it’s comparatively good value for a tri-band mesh system.

Packed full of features and with excellent performance, this is a flexible and powerful mesh system. But is it a worthwhile alternative to the likes of Netgear Orbi?

Available in black or white, the Asus ZenWifi AX gives you the choice of which product will fit into your home the best. The system comes as two devices, giving you a main router and a satellite that you can place elsewhere.

Each rounded cuboid satellite (160 x 75 x 161.5 mm) is identical, down to the slightly confusing array of ports on the rear: each satellite has three Gigabit Ethernet ports and a WAN port for the internet connection.

Either device can be the primary router, with the other acting as a range-extending satellite, but it would be nice to have something to distinguish between the two as with the Orbi, which has separate router and satellite devices. Still, you only set the system up once, so any initial confusion is quickly forgotten, and you get plenty of Ethernet ports for wired devices. 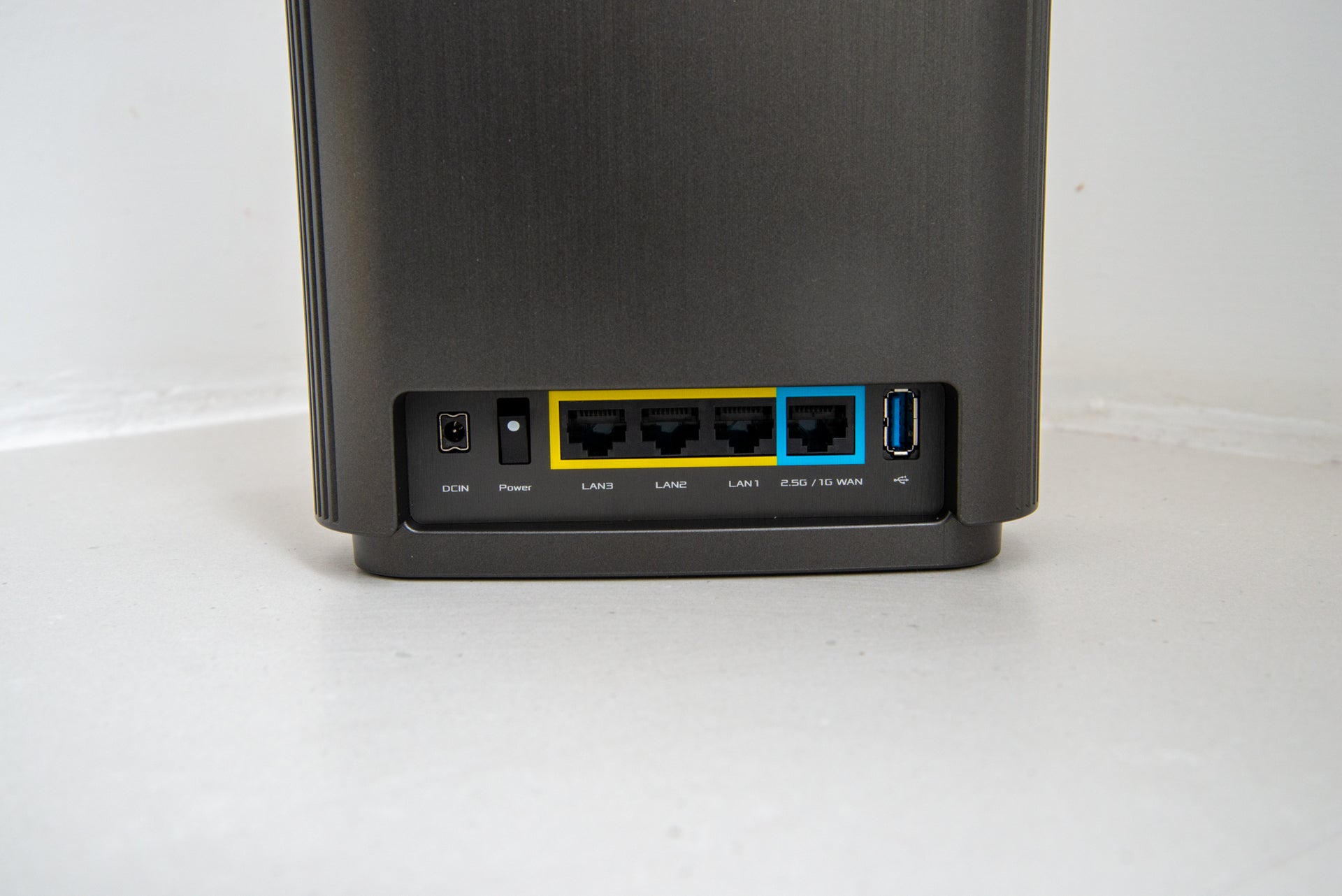 It’s good to see that there’s a 2.5Gbps Ethernet WAN port. While most of us won’t be able to use this port to its full potential, as full-fibre connections become more popular, this router is ready to go.

As with most modern routers and mesh systems, the Asus ZenWifi AX is set up and configured through the smartphone app. It’s a little cluttered and looks like the kind of app that a motherboard company would make. Yet, get past the information-dense screens and there’s a lot to like with this system.

First, you get taken through the initial configuration, which should only take a few minutes. You start with the first device and get this connected via Ethernet to your modem. Once the router is configured, the satellite has to be connected within 3m of the router to receive its configuration; you can then unplug it and put it where you want it.

Dive into the options and there’s plenty of flexibility in how the system is configured. The default configuration uses the second four-stream 5GHz network for the backhaul (the communication between satellites). You can turn off the dedicated backhaul if you’d rather have more shared bandwidth or you want to use Ethernet instead, or you can switch and use the slower two-stream 5GHz network for the backhaul.

The default settings combine the 5GHz and 2.4GHz networks under a single name, with the router choosing where to send clients. If you want more control, you can split the networks; a feature that’s not normally available on mesh systems, although these are the kinds of decision that only those more au fait with wireless networks will want to change. Asus has its AIProtection Pro built in, which is powered by Trend Micro and gives you network-level malware scanning and parental controls. With the powerful parental controls, you can create profiles for each member of your family containing all of their devices. You can even control which websites each person can look at and when they can use the internet.

There’s also simple Quality of Service (QoS) settings, where you can set the type of traffic that you want to prioritise (gaming, media streaming and so on), and let the router sort out the details. The client networks are a little slower than on the rival Netgear Orbi Wi-Fi 6 (four-streams for both 5GHz and 2.4GHz networks, running at 2400Mbps and 1200Mbps, respectively). And, you get fewer streams overall. My guide to Wi-Fi 6 goes into more detail on why streams are so important.

As useful as specs are, it’s the performance that really counts. I used a laptop upgraded with a 2×2 (two-stream) Wi-Fi 6 card. Up-close, I got impressive throughputs of 466.29Mbps, with speeds of 205.66Mbps on the first floor and 282.45Mbps on the second floor. These are quick, but the Orbi Wi-Fi 6 was a touch quicker. 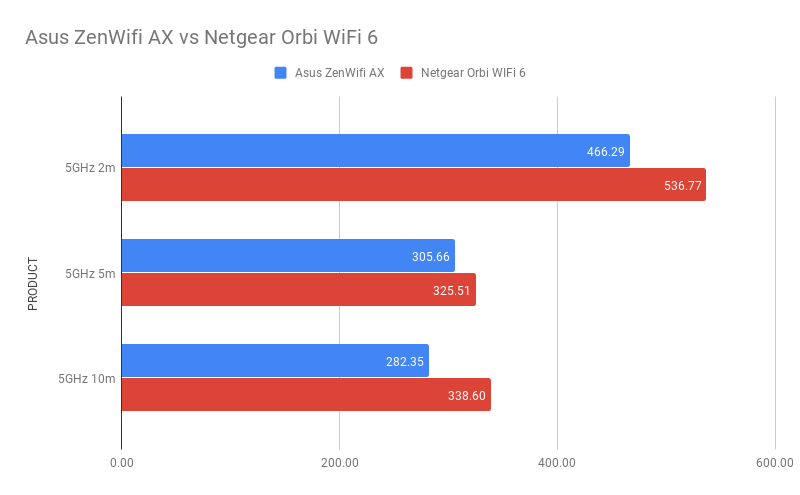 Should I buy the Asus ZenWifi AX?

Line up the Wi-Fi 6 mesh systems that are available, and the Netgear Orbi Wi-Fi 6 performed slightly better in my tests. And, as this system as more streams available, it should perform better in the future when there are a lot more Wi-Fi 6 devices. That said, the big issue with Netgear’s system is price: it’s super expensive and nearing on double the price of the Asus ZenWifi AX.

Given that the ZenWifi AX is also extremely fast, plus it’s more configurable and gives you more control over how the communication between satellites works, it’s currently the best all-round Wi-Fi 6 mesh system that you can buy.