Wi-Fi 6 is the new name given to one of the latest standards of Wi-Fi used by consumer electronics goods including phones, tablets, laptops, and routers.

The previous name was ‘IEEE 802.11ax’, and the Wi-Fi Alliance, the industry body which tests and certifies Wi-Fi products, decided that after 21 years since the first Wi-Fi standard was issued, some snappier names were needed.

On the 3rd of October 2018, Wi-Fi Alliance President and CEO Edgar Figueroa said:

“For nearly two decades, Wi-Fi users have had to sort through technical naming conventions to determine if their devices support the latest Wi-Fi. Wi-Fi Alliance is excited to introduce Wi-Fi 6, and present a new naming scheme to help industry and Wi-Fi users easily understand the Wi-Fi generation supported by their device or connection.”

The Alliance has has done us all a kindness and renamed each Wi-Fi version to something considerably more palatable. So for instance, the latest Wi-Fi standard – the standard formerly known as 802.11ax – is now simply called Wi-Fi 6. Not only that, the previous standard, 802.11ac, has been retroactively named Wi-Fi 5.

Not only is that a whole lot easier to read and pronounce, these new labels should give buyers a good idea of the kind of Wi-Fi performance they can expect from their new tech.

Wi-Fi 6 was introduced in April 2018. This latest version offers a speed boost of course, but you can also expect more reliable performance on demanding networks, such as those found in congested public areas – airports, stadiums and so on. That’s because more devices are now simultaneously supported (or, as techy peeps would say, the ‘throughput has increased’).

As if that wasn’t enough, Wi-Fi 6 is also more power efficient, as the signal is cut when not in use. Therefore, any phones and other devices that use this standard will have their batteries sapped at a slower rate.

What are Wi-Fi standards?

Each new Wi-Fi standard that comes along introduces improvements and refinements to our wireless networks. Wi-Fi 6 is the sixth generation of these standards, as the name kind of implies.

Here’s a full table of the previous Wi-Fi standards, including their old and new names, maximum speeds and other pertinent information.

Note that the three generations prior to Wi-Fi 4 have not officially been rechristened by the Wi-Fi Alliance, as they’re now defunct and won’t be found or supported by any new products.

On speeds, you should note that the speeds given here are theoretical maximum speeds – even if you have the latest phones and laptops, if there are other devices in your home all using the same connection, or you’re moving closer or further away from your router (and you’ve not got a mesh Wi-Fi system set up), then your mileage may vary.

To take full advantage of Wi-Fi 6 and its improvements, you’ll need the proper equipment. For one, you’ll need an 802.11ax compatible router. In addition, each device that connects to that router should have the appropriate Wi-Fi 6 antenna.

Wi-Fi standards also ensure that products are backwards-compatible. In other words, older connected devices which don’t conform to the latest standards will still happily connect to a Wi-Fi 6 router. They just won’t be able to capitalise on those updates. Likewise, any smartphones, laptops and other devices which are Wi-Fi 6 compatible can hook up to a router using Wi-Fi 5.

When is Wi-Fi 6 launching?

The standard was officially unveiled under its older moniker in April 2018 and some devices do already support it, but 2019 is the first year we’ll see it creeping into our everyday gadgetry.

The Wi-Fi Alliance will also begin a programme of certifying devices as being Wi-Fi 6 interoperable, and helping consumers to make an informed choice by issuing a seal of approval: 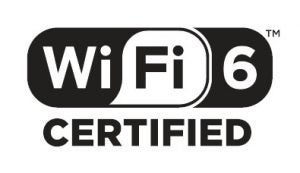 Phones, laptops and premium IoT smart home devices should all emerge with that shiny Wi-Fi 6 Certified logo slapped on the box and listed in their spec sheets.

That said, don’t expect Wi-Fi 6 to be a mainstream thing for a few years yet. Andrew Zignani, Senior Research Analyst, ABI Research said:

“Wi-Fi continues to be a predominant technology for accessing the internet, with a strong history of success. Wi-Fi Certified 6 will further escalate Wi-Fi’s role, with more than one billion Wi-Fi 6 chipsets expected to be shipped annually in 2022.”

No. Since the beginning, Wi-Fi has used two radio frequencies – 2.4GHz or 5GHz.

The 2.4GHz frequency is quite crowded as it’s used by everything from automatic garage doors to old-school baby monitors. Bluetooth, another wireless technology standard, also occupies the 2.4GHz band.

This excess noise is why the much faster 5GHz band was added to Wi-Fi standards.

Most modern routers and client devices these days are dual-band, which means they send and receive data over both the 2.4GHz and 5GHz frequencies.

You can therefore choose which band to connect to on your wireless device, providing it also uses both. You might wonder why anyone would bother using the 2.4GHz band given a choice between the two. However, this frequency is actually more effective at passing through obstacles such as floors and walls – great news if you live in a massive house, and don’t have a mesh Wi-Fi setup.

As for 5G, that’s something completely different. This is the new super-fast data network that’s rolling out across the UK from 2019, allowing us to get more reliable access to the internet on our phones and other SIM-enabled devices.

In 2019 we’ll see the launch of several smartphones which support the new Wi-Fi standard. For one, Qualcomm’s Snapdragon 855 platform, launched at the very end of 2018, supports Wi-Fi 6. We’re expecting to see that chipset packed inside of most premium smartphones released this year, like the OnePlus 7 and Sony’s new flagship handset.

Are Wi-Fi 6 and Sub-6GHz the same thing?

They are not! If you hear the phrase ‘Sub 6GHz’, this is basically a collective term for another set of bands that have been reserved for 5G networks. Frequencies below 6GHz are well suited to 5G delivery, as they don’t require line of sight from source to destination and aren’t as badly affected by inclement weather – particularly useful for readers in the UK, where is rains roughly 300 out of 365 days a year.