While home internet used to be solely provided by single routers, you’ve also now got the choice of a mesh system that uses multiple access points around your home to give you even greater coverage. In the battle of Router vs Mesh System, which one is really the best for you?

In this guide, we’ll go through the differences between the systems and help you choose the right system for you.

A standalone router connects directly to your broadband and is responsible for dishing out a wireless signal to your entire home. As such, as the simplest, most easy-to-understand type of device as you only have the one box to worry about. As you generally get very little control over where you place your router, it can mean that you get dead spots in your home where the wireless signal won’t reach.

A wireless mesh system consists of a router that plugs into your home network as above. However, you also get one or more satellites that you can place around your home. These connect together and with the router via a wireless link (many also let you use Ethernet for a more reliable wired connection), repeating and boosting your wireless signal. As such, a mesh system can give your more even wireless coverage without any dead spots.

Router vs Mesh System – Which one is more powerful?

Generally, a router will have a faster processor and larger antennas than a mesh system’s router. As a result, you can get better performance from a standalone router. Take the Netgear RAX80, for example, which has similar Wi-Fi specs to the Netgear Orbi RBK852 mesh system, and both use the new Wi-Fi 6 standard.

In my tests, the RAX80 proved faster overall throughout my house, even on the second floor. This shows how the extra power and external aerials of the router make a big impact on performance.

However, the limits of the single router showed itself at range and there were some areas, such as at the back of the bathroom on the second floor and outside into the garden, where speeds dropped off. With the RBK852, I got much coverage in all parts of the house, albeit at lower maximum speeds. 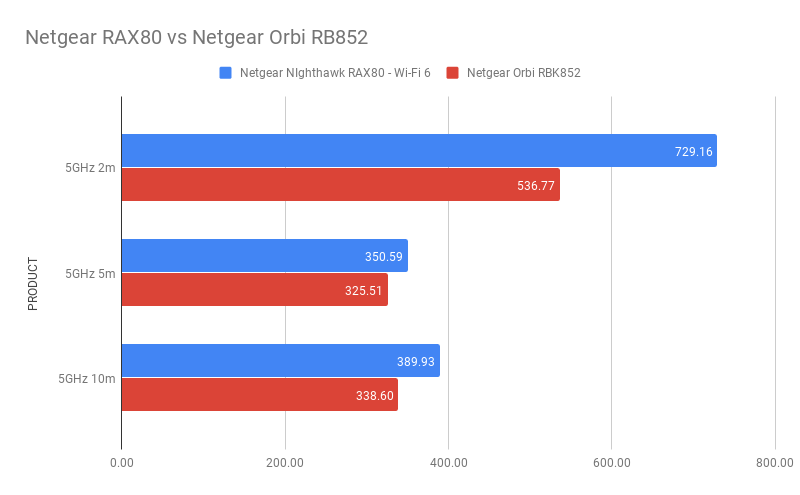 The real question you need to ask is, where do I need maximum throughput speeds? You may well find that a standard router gives you the coverage that you need. Certainly, in my case, either the router or mesh system would do well in my house.

The main reason to buy a mesh system over a standard router is to overcome obstacles and poor wireless in some areas in your home. A good example of this is with a mesh system I helped install in a house with very thick walls. A single router didn’t provide enough power to punch through them, leaving many dead spots in the house; a mesh system with a carefully placed satellite eliminated the problems and gave solid wireless all around the house.

Router vs Mesh System – Is a mesh system required to extend a network?

You don’t have to upgrade to a mesh system to extend your wireless network, and there are a few options to boost Wi-Fi coverage on a regular router. First, you can opt for a wireless extender. These devices connect to your existing wireless network and then give you a new wireless network to connect to. The advantage is that these devices are cheap but they’re often slow. Good use cases are for covering fixed devices that don’t need to move around, such as a media streamer in a kitchen.

You can also use a second router configured in access point mode, connected to the first router via Ethernet. In access point mode, the second router sits on the same network and is given the same network name and password as the first one, extending your wireless network. This can be handy if you need to run your Wi-Fi to a location quite some distance from your main router, such as an outbuilding. However, there are some issues with both of these setups that mesh systems fix.

Router vs Mesh System – What is seamless roaming and why is it important?

When a client connects to a wireless router or satellite, it’s programmed to hold onto that connection while it can see it, even if performance degrades. That’s not an issue for a device that isn’t moving, but if you’ve got a laptop or mobile phone, moving around can mean that these devices cling onto a poor wireless connection.

That’s even if you’ve got an additional router in access point mode, as your client will take a long time to switch over to the new access point. You can force the issue by turning wireless on or off.

Mesh systems are built to support seamless roaming standards. When supported by devices, including most modern phones and laptops, seamless roaming gets a client to switch to the strongest and best satellite automatically. In most cases, this can be done in a fraction of second so that voice calls or video streaming aren’t interrupted. As you move around your home, then, a mesh system handles devices better than a router and a wireless extender or additional router in access point mode.

A good case in point is with my garden office. Outside, wireless devices can just about see the main network in the house, but the connection speed is very slow and unreliable, and it takes my phone a while to switch to the access point in the office. Replacing the system with a mesh system, with a satellite in the office, makes the switch seamless.

Routers tend not to support this technology because they’re standalone devices, so don’t need this tech. It’s worth pointing out that the Netgear EAX80 wireless mesh extender supports seamless roaming and works with any wireless router, but it has to be in wireless mode (if you plug it in via Ethernet, you lose this feature). 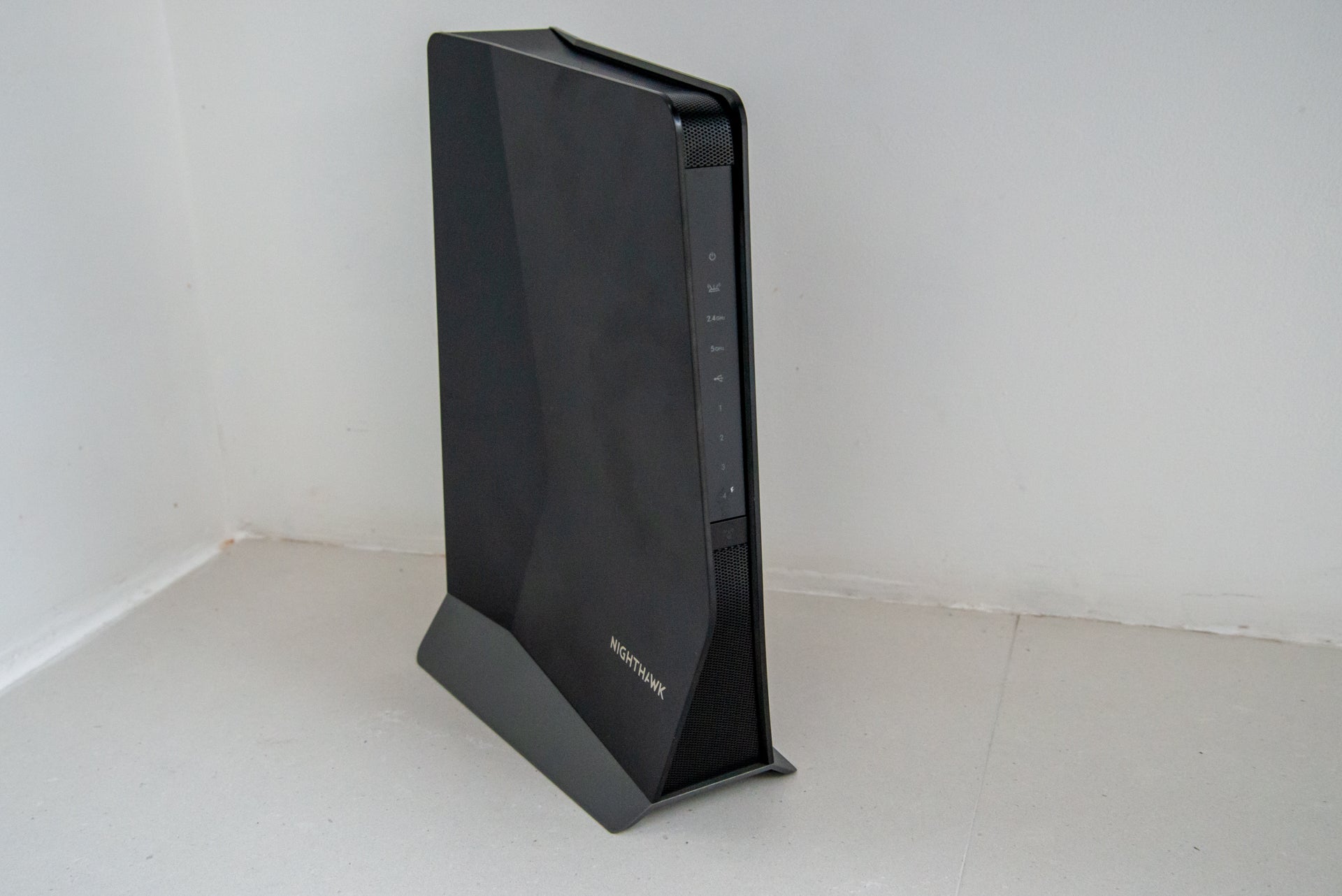 Router vs Mesh System – What else can a mesh system do?

Because mesh systems are integrated and act as one single system, they can be easier to manage. Change the wireless channels that you’re using, and they’re replicated across all satellites. And, a guest network is turned on automatically across all devices.

With a router, changes are only made on that device, so you have to manually update and control guest networks and wireless channels on any access points individually. This makes mesh systems a lot simpler to administer.

Related: How to speed up your Wi-Fi for free

Router vs Mesh System – What else can a router do?

Routers have their own advantages, too. Mesh systems largely present a single wireless network, combining the 2.4GHz and 5GHz bands into one, then sending wireless devices to the best network automatically.

With a router, you can have this option but you can also split the networks into individual bands, having one 2.4GHz and one or more 5GHz network. The advantage of this is that you can choose which band to connect devices to, say connecting older slower devices and smart home kit to the 2.4GHz band, and forcing devices that need faster connection speeds to the 5GHz band.

You can also buy tri-band routers that give you a second 5GHz network for even more devices, whereas this is relatively rare with mesh systems.

Router vs Mesh System – Which one should you buy?

As you can see, there’s no straightforward answer as to which system is best and the main choice comes down to what you want to achieve. If you’ve got a smaller home and don’t have any thick walls, a standard router will probably suit you, and you can buy a new powerful model that will cover your entire home and give you your full broadband speed.

Also, go for a router if you need the absolute best close-up speeds, say for gaming for fast internal file transfers. Routers are also the better option if you want more control over your networks, say splitting your 2.4GHz and 5GHz networks. If you need to extend range to less often used parts of your home, then a Netgear Mesh extender is a good option for inside the same home; otherwise, go for a second router in access point mode for outbuildings.

A mesh system makes a lot of sense if you have significant problems with a wireless signal, and you want a simpler all-in-one system to manage. This is particularly true if you find that you get poor reception when moving around, say with your phone struggling to maintain a connection. You sacrifice some control and the biggest headline speeds but a mesh system provides a simpler, more consistent connection for all devices.