It's impossible to fault the Netgear Orbi WiFi 6 RBK852 for speed and range, with this Wi-Fi 6 mesh system delivering the fastest results we've ever seen. What you gain in performance you lose in features, however: this system lacks the parental controls and security features of the older Orbi system. This, combined with the high price, means the Netgear Orbi WiFi 6 RBK852 is for early adopters – the rest of us are better to sit tight.

With the launch of the original Orbi system, Netgear demonstrated the true power of wireless mesh systems. Today, the company is back with the Netgear Orbi Wi-Fi 6, to show how the next generation of wireless serves to create mesh networks that are even more powerful.

But with an increased price and a lack of features, are the new Wi-Fi 6 speeds worth the expensive upgrade?

Many rival mesh systems sell as a three-pack, but the Netgear Orbi Wi-Fi 6 is mostly sold as a two-pack (RBK852, £699.99) that comprises a router and a satellite. Don’t be fooled into thinking that results in less coverage than those systems with three satellites; the Orbi Wi-Fi 6 package offers excellent range that will easily serve a large house. If you need more coverage, then there’s an RBK853 (£949.99) three-pack too.

On the outside, the router and satellite look identical. In fact, the Netgear Orbi Wi-Fi 6 RBK852 pack looks similar to the original set, only this time there’s a degree of contrast with the silver base, and a more angled body. Both devices are a little larger than rival satellites, although at 254 x 195 x 710mm it’s not by so much you’ll struggle to find them a home. 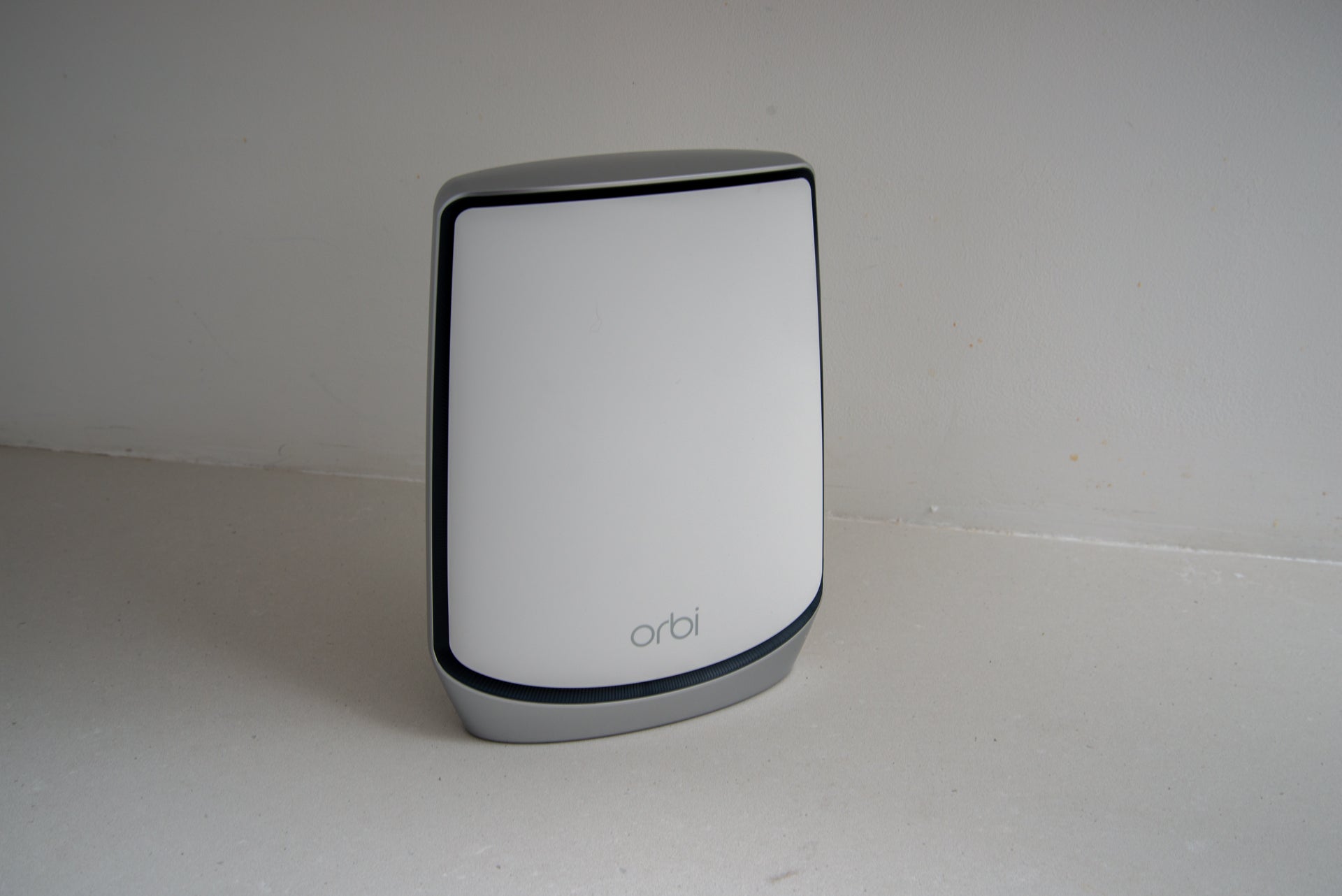 The router and satellite look identical

While it’s not immediately apparent from the outside that the wireless standard has been upgraded, there are telltale signs on closer inspection. Turn the router around, and you’ll clock a 2.5Gbps Ethernet WAN port, which is built for the fastest fibre broadband connections for both today and tomorrow.

There are now four Gigabit Ethernet ports for wired devices: one more than on the original. This unit lacks a USB port, which was included on the original, although it isn’t a feature many will miss.

The satellite has four additional Gigabit Ethernet ports, which provide a decent level of flexibility for hooking up wired devices. 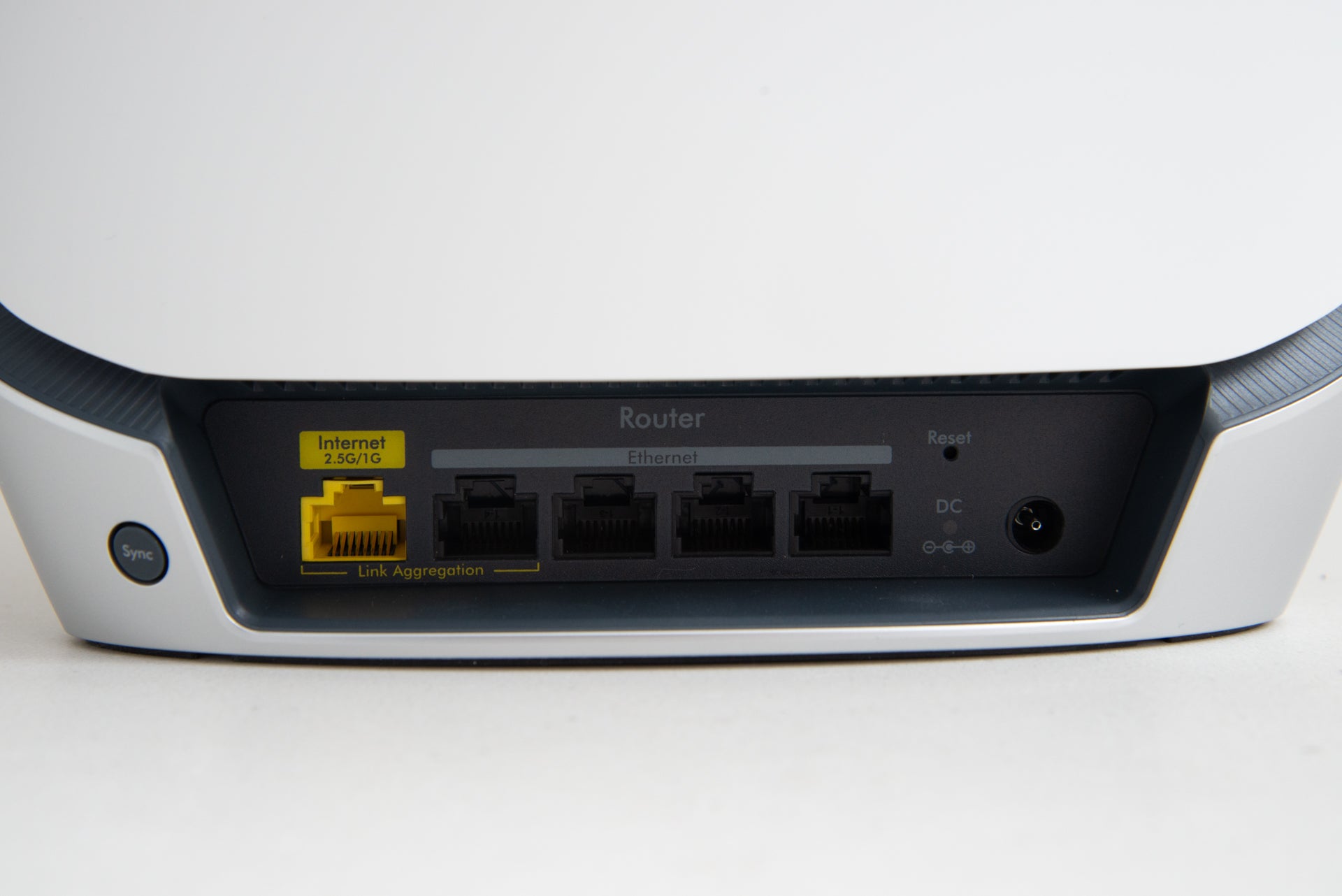 As was the case with the original system, the Netgear Orbi Wi-Fi 6 RBK852 is set up and managed through the Orbi app. As well as making it easy to get going, the app also provides remote access to the router – handy, if you need to reboot the router while you’re out and about.

The app provides pointers on the best placement of both the router and satellite to ensure you get a secure and fast connection between them. One of the reasons that Orbi systems are so powerful is because they use a dedicated wireless link for the backhaul (the connection between satellites).

On this new system, there’s a four-stream wireless backhaul that runs at 2400Mbps, up from the 1733Mbps of the original system. You don’t have to use wireless: the system also supports Ethernet backhauls, so you can use wired networking instead. This is particularly useful if your home has super-thick walls, or you need more range; I have an outside office and rely on Ethernet to get internet there.

Greater wireless bandwidth should help the system if you need to add more satellites. Currently, it’s expensive to add satellites; but we expect Netgear to release cheaper, slightly slower options later, much as it did with the existing Orbi range. The app is excellent, but several features haven’t been implemented yet

First, a quick word of warning. If you have older Orbi satellites, then these can be attached to the Netgear Orbi Wi-Fi 6 RBK852 via Ethernet, and they’ll appear in the app. However, the system isn’t designed to be backwards compatible and we had trouble with devices constantly having their IP addresses changed. An update is being looked at – but, for now, upgrading to the Netgear Orbi Wi-Fi 6 RBK852 means ditching any existing satellites you have.

For the meantime, you’ll also have to accept a loss of features. If you love the Circle parental controls available with the existing Orbi, which allows grouping and control of your children’s devices for web filtering and regulating internet use, you won’t find them here. You miss out on the Netgear Armor security features too. Both are coming, but for now, the Netgear Orbi Wi-Fi 6 RBK852 does less than its sibling.

Currently, then, the Netgear Orbi Wi-Fi 6 RBK852 is a basic router that offers one wireless network for your home, with an optional guest network that you can toggle on or off.

Streams are particularly important with Wi-Fi 6, compared with the older 802.11ac Wi-Fi 5 standard. When Wi-Fi 6 devices connect, the router can decide to give each device its own stream, or a faster device can take multiple streams to boost the maximum throughput. Wi-Fi 5’s stream sharing is far more basic and restricted, and the standard is slower overall.

With a mesh system, the benefits of Wi-Fi 6 grow with the number of satellites you add. With this two-pack, there are 16 streams for devices; throw in another satellite, and you get 24 streams in total.

As is common with mesh systems, the Netgear Orbi Wi-Fi 6 RBK852 presents both networks under the same name. Devices are then pushed towards the best band based on performance and capability. Fast roaming also ensures devices are pushed to connect to the closest satellite to ensure the best performance on devices that can be moved, such as laptops and mobile phones.

As you can see from the graph below, the new Orbi Wi-Fi 6 is far faster than the previous model, the RBK50. 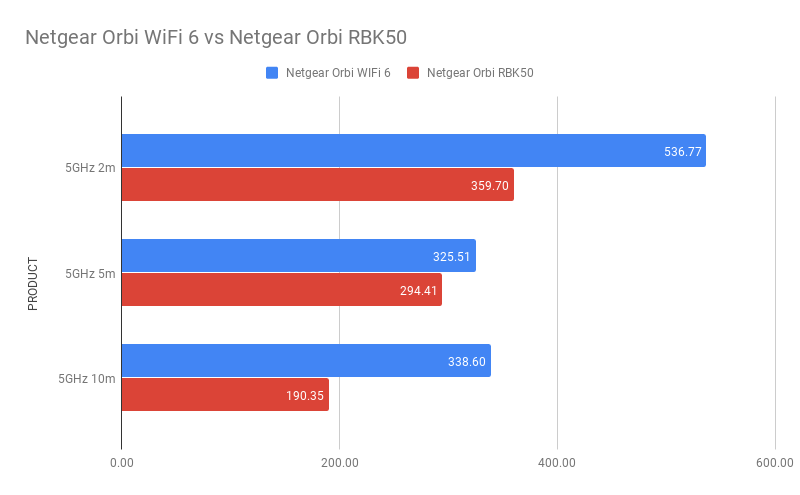 Should you buy the Netgear Orbi Wi-Fi 6 RBK852?

With increasingly more wireless devices, Wi-Fi 6 can help alleviate bottlenecks and improve performance, as we can see from the test results here. More than that, the Netgear Orbi Wi-Fi 6 RBK852 is a mesh system, which increases capacity further by spreading out wireless access points to provide bandwidth where it’s needed in your home. From a pure speed point of view, this really is a fantastic and fast wireless system.

Yet, for what the Orbi Wi-Fi 6 gains in speed, it currently loses out in features, with no parental controls and no security options. That’s a shame considering this mesh system’s price. While I have confidence Netgear will launch these features in the near future, it’s disappointing not to have them today.

Then, there’s the lack of Wi-Fi 6 devices to really take advantage of this system, making the original Orbi RBK50 a better buy for most. Most modern day laptops support Wi-Fi 6 now, but you’re out of luck if you bought your portable PC more than a couple years ago. Consoles such as the PS4, Xbox One and Nintendo Switch also lack support.

However, even considering those negative points, we can’t take away the fact that the Netgear Orbi Wi-Fi 6 RBK852 is stonkingly fast. If you can wait for the missing features, want the quickest mesh system available and want to be ready for more Wi-Fi 6 devices, it’s the best such device out there. Most folk will be better waiting for the price to drop and the features to increase, though.