The sat-nav market is a mature one, so it’s not every day we’re regaled with exciting new features. In fact, changes are usually small refinements rather than dynamic leaps forward. TomTom’s recent new range had just one big headline feature – more intelligent route calculation – and its forthcoming series has one more – built in wireless data connectivity. Meanwhile, Navman’s recent 3D sat-navs added local business directory search to the sat-nav’s armoury, and most firms have been busy adding lane assistance in the last year too.


As far as the core business of displaying the map is concerned, useful innovations are scant. The recent trend for including 3D models of landmarks can surely only be a passing fad – and it’s not that useful anyway – and 3D landscaping (as seen on Mio’s C620T) is in a similar boat. In fact, the last truly useful addition in terms of the way maps are displayed onscreen was the move from overhead, 2D moving maps to 3D. 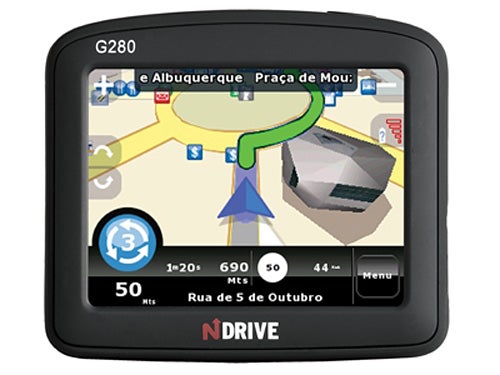 NDrive, however, has other ideas, and its G280R (with UK and Ireland mapping) – along with the rest of the NDrive range – is attempting to take the sat-nav in a completely different direction. Instead of dropping in the odd model of a famous building, Ndrive’s sat-navs feature satellite imagery overlaid onto the main map view. So, instead of plain old roads and plain old backgrounds with the odd roadside feature detailed, you get a Google Maps-style overhead photograph, with roads and road names displayed on top.


The photo maps aren’t available for the whole of the country (just 29 cities are covered right now – elsewhere, and the maps revert to a standard 3D or 2D moving map view), and where I tested the G280R, in London, the photo mapping only kicked as I passed Leytonstone on the A12. But where available they certainly add a new dimension.


Pull up to a complicated junction and look for a recognisable building and it’s surprisingly easy to relate that landmark to the picture on screen. It may not be particularly useful while you’re moving fast, but while slow or static in traffic, or when heading off where no direction of travel has been established yet, it’s quite handy to be able to relate your real position to a photographic image. 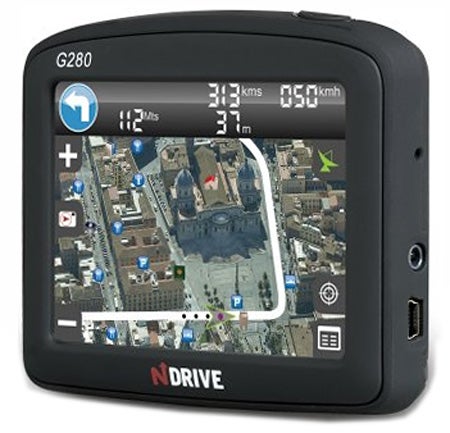 But while I can see the advantages of photo mapping as a concept, I’m not a fan of it in this particular implementation. The main issue with the NDrive G280R is that the map neither rotates smoothly around your current position to keep your heading at the top of the screen, nor does it offer an option to keep North up. Instead, it’s a pseudo heading up arrangement – in order to keep the perspective of the overhead pictures sensible, the G280R flips between a number of different points of view, depending on which direction you’re pointing in.


This keeps the imagery from looking odd and out of perspective, but it can be extremely confusing, especially if the point of view suddenly changes as you’re pulling up to a junction or are driving around a large roundabout. One moment the icon representing your position will be moving towards the top right hand corner of the screen; the next it’ll be moving towards the top left. It’s distracting, annoying and unhelpful and I’d have preferred to have been able to stick to a simple north-up overhead view when in this mode.

The photo navigational wizardry can’t mask a number of other equally serious flaws either. The speaker is the main point of concern here. It’s simply too quiet: if you have the radio on, kids screaming in the back, or are travelling on the motorway you won’t hear the G280R whisper its instructions. And with the volume turned right up to maximum it’s not only too quiet, but the speaker distorts badly. It doesn’t matter that the voice instructions are delivered in a timely manner – they’re simply too hard to hear for that to matter. 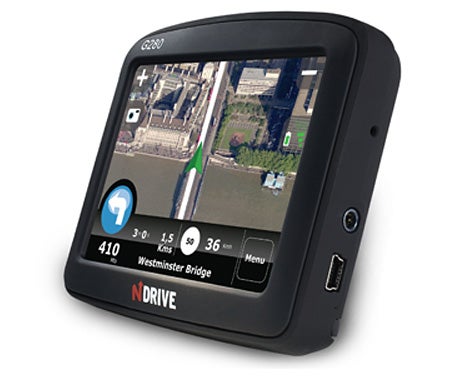 The G280R’s 3.5in screen is far from the clearest I’ve seen on a sat-nav. Colours look washed out on it, and in bright conditions it’s hard to see the standard mapping, let alone make out detail in the photo maps. And I’m none too keen on the user interface. Though addresses are simple enough to enter and seven-digit postcode entry is supported, important settings such as screen brightness and volume are found in odd locations. The volume, for instance, can be turned up in two different locations, while the brightness can only be adjusted on the home screen of the device – you have to exit the navigation application to get there.

The G280R is a pretty average when it comes to features, too. It includes speed cameras, but has no traffic information. You can switch between 2D and 3D modes (the latter has a useful autozoom feature), but there’s no lane assistance. You can’t plan multi-point routes on it. And, while there is a speed warning alarm, bizarrely this can only be given one specific limit. Set the latter to 50mph and it’ll warn you when you exceed that whether you’re on a 30mph or 70mph speed limit road.


There are a number of fluffy extras, such as a media player, a couple of simple games, a photo viewer and calculator. The G280R will get you where you want to go, albeit in a rather confusing way. It also picks up and locks on to satellites quickly and calculates routes without delay, plus it’s bundled with a good, solid windscreen mount.


A few extra toys and the bare minimum of features aren’t enough to make up for the G280R’s problems. Photo navigation is a good idea, but here it isn’t implemented well and there are simply too many flaws elsewhere to make up for it. The device’s screen, speaker and ease of use are all poor and features are scant. I wouldn’t consider recommending this sat-nav at any price, let alone at nigh-on £200.