The compact MSI didn’t balk at 1080p gaming, where it got beyond 80fps in Dirt Rally, GTA V and Middle Earth: Shadow of Mordor. In those latter games the MSI was around ten frames faster than the Asus, despite the laptops sharing the GTX 1060.

The GTX 1060 has enough power for 1440p panels and VR headsets, but be prepared to dial back the quality settings to get games running smoothly in these scenarios.

The MSI’s lead in gaming benchmarks is explained by its Core i7 processor – the Asus ROG Strix GL702VM made do with a weaker Core i5. The GS43 was a few hundred points ahead in single-core CPU benchmarks, but miles ahead in multi-threaded tests – it scored 13,221 in the Geekbench multi-core test, while the Asus could only manage 9,271.

The MSI is smaller than the Asus, but it’s far more potent. It’ll be smoother when gaming at 1080p and when outputting to more demanding hardware, and its Core i7 CPU ensures it’ll handle work tasks and general computing with more speed. 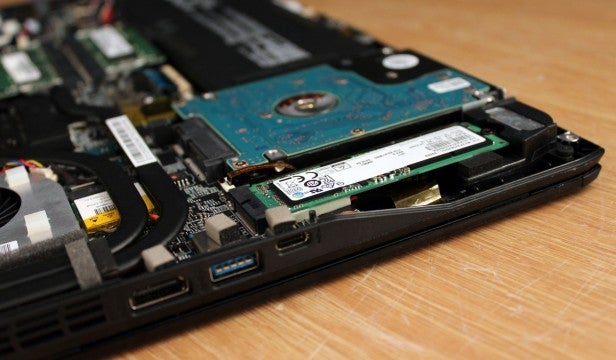 The storage is impressive, too, with reads and writes of 1,937MB/s and 1,352MB/s respectively. These will definitely not be a bottleneck.

By default, the MSI arrives with its fans at automatic speed and its Sport overclocking mode enabled, which sees the core dynamically overclock to around 1,860MHz when gaming – a huge leap. At this level the fan noise isn’t bad, with a noticeable rumble that’s still quieter than the majority of gaming notebooks. When idling the MSI is barely audible.

The processor peaked at 88 degrees, with the GPU topping out at 76 degrees – one of the best temperatures I’ve seen from a Pascal-powered portable.

Those internal temperatures are fine, but the MSI had issues dissipating the heat. With default settings used with a gaming stress-test the area above the keyboard became too hot to touch, with the underside panel almost as toasty. The keyboard was warm, and air was vented from the right-hand side of the machine – no good if you’re using a mouse.

The Comfort and Eco options saw clock speeds vary. In Comfort mode the GPU veered between 1,650MHz and 1,770MHz, while in Eco mode the core stayed at similar speeds but the memory dropped to around 2,000MHz. 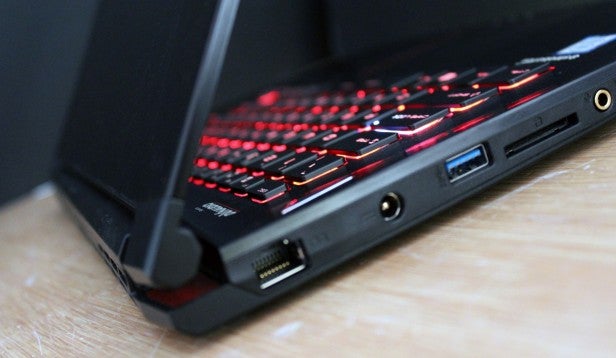 In Comfort mode the noise and temperature levels on the inside and outside barely changed. In Eco mode the GPU temperature dropped to a modest 67 degrees, the noise was cut back, and the exterior was cooler.

That bodes well for heat dissipation, but it’s no good for playing games. The minor clock speed change in Comfort mode reduced the MSI’s Dirt and Shadow of Mordor scores by a couple of frames, but Eco mode dropped the original scores in those games to 33fps and 27fps.

All of those tests were conducted with automatic fan speeds, but the GS43’s other fan options made little difference to sound and temperatures. The Advanced mode lets users tweak fan speeds like gear ratios in a car, but most people just don’t need this level of depth.

Also remember that you’ll only get maximum use when the MSI is plugged in, as relying on battery power means the laptop can’t use its Sport and Comfort modes.

The GS43 has more complex clock and fan options than most laptops, but most of them make little difference to the bottom line: if you’re gaming on this system at full pelt, the base is going to get uncomfortably hot – and the keyboard won’t be far behind.

Toning the clocks down does reduce the heat and noise output, but it’s also a compromise, as games won’t run as smoothly, especially in Eco mode. That’s a disappointment, given that this machine is sold on its gaming ability and small size. 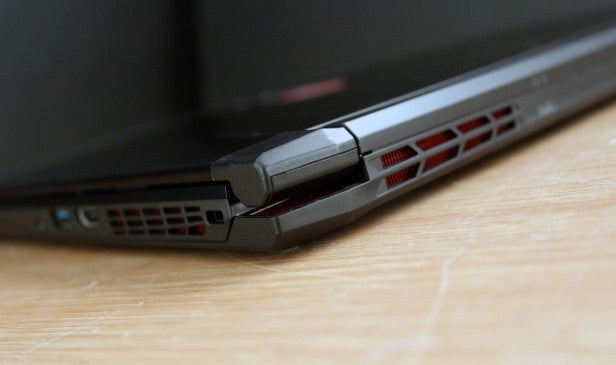 The MSI’s 1080p IPS screen has a solid density level of 157ppi and a matte finish, but it doesn’t have Nvidia G-Sync – now a very common feature in gaming laptops. That means other laptops will deliver a slightly smoother gaming experience.

Technological quibbles aside, the MSI delivers decent performance. Its colour temperature of 6,353K is fantastic, and its average Delta E of 3.66 is middling. The sRGB gamut coverage level of 85.2% is on par with many other gaming laptops.

The contrast level of precisely 1,000:1 is spot on, and the black level of 0.31cd/m2 is marginally deeper than most other gaming notebooks.

MSI’s Dragon Center has several screen modes. Unusually, most are excellent: the Gamer, Movie, Designer and sRGB options are all similar, and all drop the black level a little while improving the average Delta E to around 1.3. The former improvement will make contrast better and colours deeper, while the latter improves accuracy.

Uniformity is good, too, perhaps because of the smaller screen. The brightness deviates by less than 10% across the screen, which is better than most gaming notebooks.

It’s a good bill of health, with impressive colour accuracy and contrast as long as you pick one of MSI’s screen modes. There’s no G-Sync, but this is still an excellent gaming screen.

The pair of 2W speakers are controlled by the Nahimic audio tool. It’s loaded with settings, but by default uses its music mode. This option delivers middling high-end and treble audio, but the pair of small speakers still suffer from a slightly tinny high-end and flat, lifeless treble sounds. There’s very little bass, too, due to the lack of a subwoofer.

The Movie mode turns on surround sound and reverb, which makes sounds a little deeper and louder but also increases the muddy, flat feeling, with high-end sounds compressed towards the mid-range.

The FPS mode is too tinny, with an unbalanced high-end, and the Strategy and RPG modes make little difference. The Racing option is deeper than everything else, presumably to give engines added grunt, but it just makes cars sound like they’re underwater.

The Music and Movie modes are the best options, but they’re still just mediocre. There’s not enough room for better speakers in a laptop this small, but that won’t be too a concern if you wear a headset.

MSI also includes one of the most obnoxious audio options I’ve ever seen with the GS43. It’s called Audio Launchpad, and it allows six sound effects to be played in-game using keyboard shortcuts. Three different profiles with six different sound effects can be configured.

It’s awful. I can see violence breaking out if people deploy memes or comedy sound effects during tense gaming sessions.

Used as our main laptop for the review period
Tested for at least a week
Used consistent benchmarks for fair comparisons with other laptops
Reviewed using respected industry benchmarks and real world use
Previous
MSI GS43VR 6RE Phantom Pro Review Next
Keyboard, Trackpad, Battery and Verdict Review