What is Asus ROG Strix GL702VM?

Asus’s ROG Strix brand is the company’s way of producing quality mid-range gaming hardware without the extreme performance – or price tag – of the pure ROG machines. The GL702VM is a clear mid-range machine, undercutting its rivals while still maintaining appealing performance and design.

The key component at play is the Nvidia GeForce GTX 1060 graphics card. It’s a new Nvidia core powered by the efficient Pascal architecture, which means there’s barely any difference between this mobile chip and its desktop equivalent.

There are more powerful gaming laptops around: the XMG P507, for example, can be configured with the GTX 1070 and a similar specification to the Asus, but it will cost a few hundred pounds more.

The processor is another mid-range component. The Core i5-6300HQ is Intel’s entry-level quad-core laptop chip, with a speed of 2.3GHz and a Turbo peak of 3.2GHz – a little lower than the Core i7 that’s a step above. 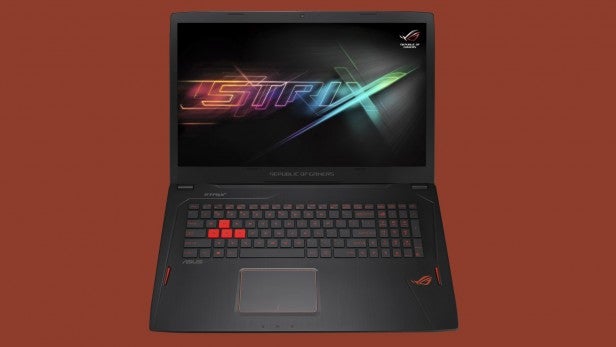 The rest of the specification includes a 128GB SSD, a 1TB hard disk and 8GB of RAM. That’s fine, but the Strix’s budgetary limitations are obvious: the SSD is a slower SATA model, and the memory runs at an underwhelming 2,133MHz. In higher-end laptops you could expect a blazing fast PCIe SSD and faster memory.

Video: How to choose the right laptop for you

Interior connectivity includes normal Gigabit Ethernet and dual-band wireless, and the outside serves up standard ports: USB 3 and 3.1 connectors, HDMI and mini-DisplayPort outputs and an SD card slot.

This laptop might be at the lower end of the gaming notebook spectrum, but Asus hasn’t skimped on the physical design. The Strix is built around black aluminium and plastic, with orange accents on logos, the trackpad and the keys themselves. 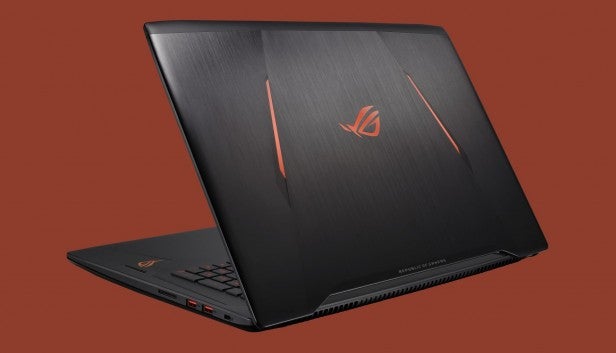 It’s a good-looking system, and its dimensions aren’t overly huge either: it weighs 2.7kg and is 24mm thick; both figures undercut chunkier rivals.

If there’s one area where the GL702VM suffers, though, it’s build quality. The screen is wobbly, and there’s too much give in the wrist-rests. The base panel is sturdier, but it can’t be opened – which means all of the components are locked down unless you’re happy to void the warranty.

The WASD keys are bright orange, and the entire ‘board has red backlighting with adjustable brightness. It also has a numberpad, a full-sized return key, and an Asus ROG button that loads the laptop’s Gaming Center app. Gaming Center monitors clock speeds and temperatures, switches between gaming profiles, and can be used to open the screen and audio utilities. 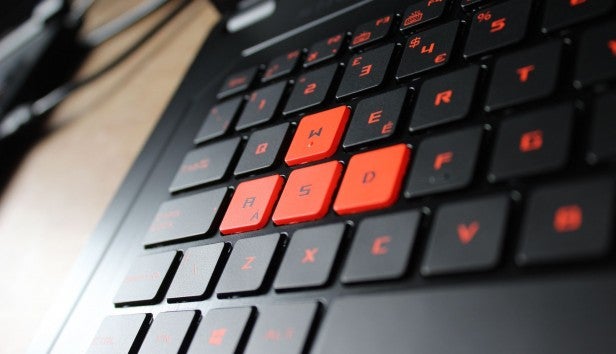 The keyboard is one of the best I’ve used on a gaming laptop – for typing, at least. The keys are consistent with and have a decent amount of travel travel, and their action is soft and quiet.

That makes it great for typing, but less so for gaming – it just doesn’t have the firm snap of the best gaming notebooks. Make no mistake, the Strix’s keyboard is fine for gaming, but top-tier players will want something with a more definite response.

The trackpad encounters similar issues. It’s fine for general computing, but its two buttons are soft and push down a little too far, which means they’re not as snappy and responsive as those on the best gaming laptops – or the best gaming mice.

Used as our main laptop for the review period
Tested for at least a week
Used consistent benchmarks for fair comparisons with other laptops
Reviewed using respected industry benchmarks and real world use
Next
Performance, Screen, battery life Review