The Motorola Moto X has a 5.2-inch screen. This sort of size has gone from being thought of as unfeasibly large to positively normal in the space of just a couple of years.

It’s significantly larger than last year’s Moto X – Motorola didn’t change the naming with this new model, so make sure you know what you’re buying – which uses a 4.7-inch display. Resolution has been bumped up to 1080p, too.

This is important as, like the Samsung Galaxy S5, the Moto X has a diamond-shaped RGBG PenTile-style sub-pixel matrix that makes even very slight deficiencies in pixel density more obvious than in an RGB-type LCD screen. With 424ppi, even a PenTile screen looks very sharp indeed – although, granted, you can still see the pixel structure if you get your eyeball next to the glass. 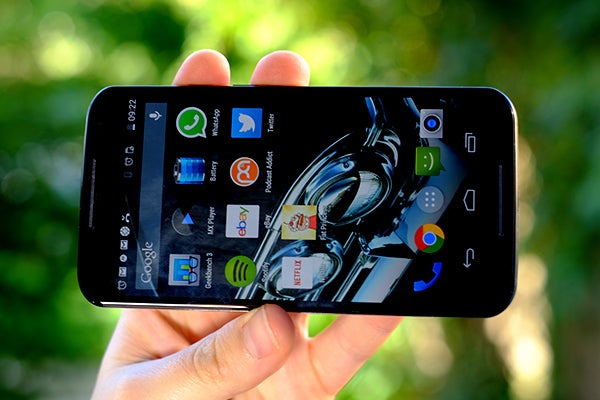 5.2 inches is a great size all round, too. Thanks to the slimming down of phones over the last 18 months, it’s much easier to handle than the earliest 5-inch phones. And it’s big enough to make games and videos look great.

This screen is far from flawless, though. The Moto X’s AMOLED screen comes with some big wins, and some issues that we think should prove deal-breakers for some of you.

Like all OLED screens, the Moto X’s offers superb contrast. Take it into a pitch black room and parts of the screen that are black will still appear perfectly black. With an LCD screen – even a top-end one like the iPhone 6 Plus – blacks will appear blue or grey in the same conditions. 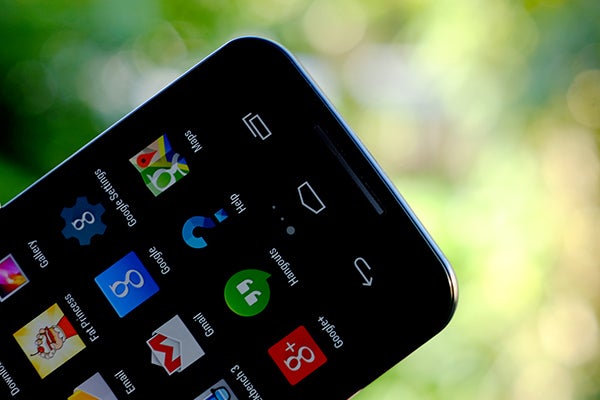 This is one of the reasons why we’re so excited about OLED TVs – they offer more cinematic contrast than, well, the local cinema.

The Motorola Moto X suffers from an issue we saw frequently in earlier OLED phones, though – colour is not at all accurate. Motorola has clearly aimed for a vivid display rather and a realistic one, and it has hit the bullseye.

Colours are closer to those you’d see in pick-and-mix sweets than those of the real world. It’s sure to wow some at first, but we found it distracting – consistently so – and had to switch to an almost monochrome wallpaper to avoid being constantly reminded of it.

Next to an iPhone 6 Plus, the Moto X’s tones appear comically over-saturated. 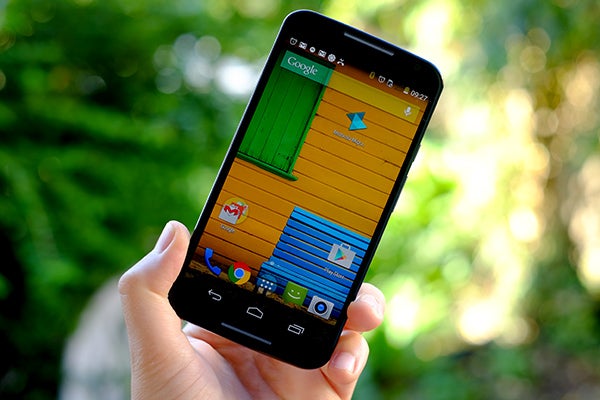 Thankfully we didn’t find that they make everyone look like a red-faced port-guzzler – as some early OLED phones did – but make the Moto X’s screen a dreadful tool for assessing photos you take with the phone. Colours are simply not as they appear.

Samsung has proved that OLED screens can provide pretty much the best displays on offer at the moment in phones such as the Galaxy Note 4, but this is a case of a ‘bad old OLED’ that offers zero subtlety. Even the much cheaper Moto G’s screen is more natural looking.

We also found the maximum brightness a little disappointing compared with Samsung’s top OLED contenders, the Note 4 and Galaxy S5. It’s good enough, but not dazzling, and this hampers outdoors visibility a little. It’s as good as an upper-tier LCD, but OLEDs normally top LCDs on this front. 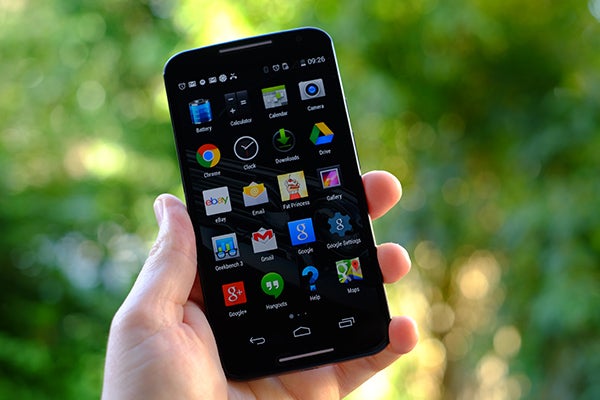 There have also been reports that the Moto X isn’t too hot for motion, presumably because of the sample-and-hold style of display most OLEDs use, but we didn’t notice anything too jarring. For those interested in this, most OLED screens don’t offer perfect motion, because lit pixels stay lit for the full duration of the frame. This can appear juddery and highlights any delay in the pixel powering down. It’s solved elsewhere by inserting black frames between video frames to smooth this out.

Now having explained that… Don’t worry about it, unless you plan to use your phone as your main TV. And if you do, well, why?

A large high-resolution screen always makes a phone seem like a good candidate for a little video-watching device. And you might assume that, like the Moto G 2014, the Moto X also has front stereo speakers.

It doesn’t. While there are two speaker outlets on the front, which are – thankfully – a little subtler than the Moto G’s, only one of them is a loudspeaker. The other is just a call speaker, which doesn’t pitch in when you’re listening to music, podcasts, whatever. 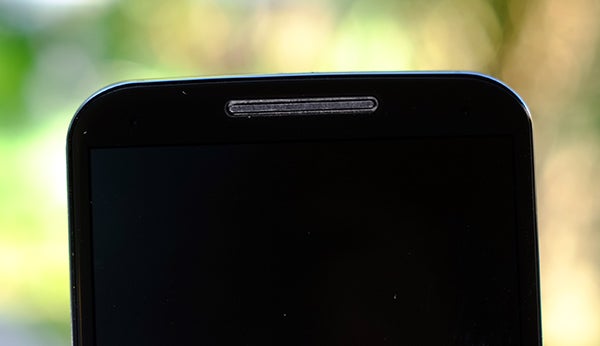 We’ll admit to being a little disappointed, as it means you don’t get the neat stereo effect when playing games that the HTC One M8 offers. However, audio quality is both much better than the Moto G 2014 and among the best offered by mobile phones.

It’s beefy-sounding, with much greater authority than most. As with any mobile phone speaker, there’s zero real bass, but there’s enough mid-range substance to render spoken voices in the register intended, rather than leaning on treble as lesser phone speakers do.

Top volume is good, but like the HTC One M8 the Motorola Moto X focuses on creating a powerful sound rather than an all-out loud one. From memory, the Motorola speaker is a little louder than the HTC’s, though.