The Moto E (2015) is an updated version of Motorola’s popular budget smartphone that has some noteworthy improvements. One is a new design, another is a larger screen, but the best is that it now includes 4G LTE for faster internet and video streaming on the go.

For less than £100 PAYG (or £109 SIM-free) you get a solid and stylish smartphone that borrows some of the key features from Motorola’s high-end devices and has outstanding battery life. There are plenty of good cheap Android smartphones these days, but these updates ensure the Moto E 2 remains one of the most attractive options.

At a time when phone manufacturers are creating phones that make bold and flashy statements, the Moto E takes a different route. Rather than shouting about how great it is, the look and feel of the Moto E warmly invites you to pick it up and have a play, and it feels great in the hand.

The body is a smooth, durable matte plastic and it comes in black or white. But what gives the design some flair are the optional Grip Shells and Motorola Bands that fit around the edges. There are currently six colour bands available – Red, Turquoise, Raspberry, Blue, Golden Yellow and Purple – priced at £14.99 for three. The Grip shells come in Golden Yellow, Charcoal, Turquoise, Blue and Raspberry for £14.99 each.

One of the great things about the Grip Shells is you can stick photos or graphics between their clear surface and the back of the phone, creating a truly personal handset. We don’t know if this was an intended use of the shells, but it’s pretty easy to do and the results are decent. 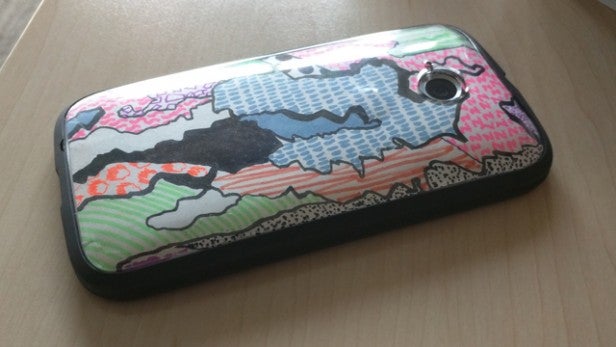 But besides the grips and bands, not too much else has changed physically, at least not at first glance. Look closely, however, and you’ll notice the Moto 2015 is slightly taller and wider than last year’s phone. This is to accommodate its bigger 4.5-inch 540 x 960–pixel display, so we’re not complaining about that. Another side effect is the speaker below the screen has been removed – it’s cleverly built into the earpiece now.

Measuring 12.3mm at its thickest point, the Moto E looks a little chunky, but its curves and the rubberised band make it nice to handle. The build quality is pretty decent as well, and the Moto E’s screen is protected by Gorilla Glass 3. Once the preserve of higher–end phones, the tough and shock–resistant Gorilla Glass 3 should protect the Moto E from general drops and scratches. 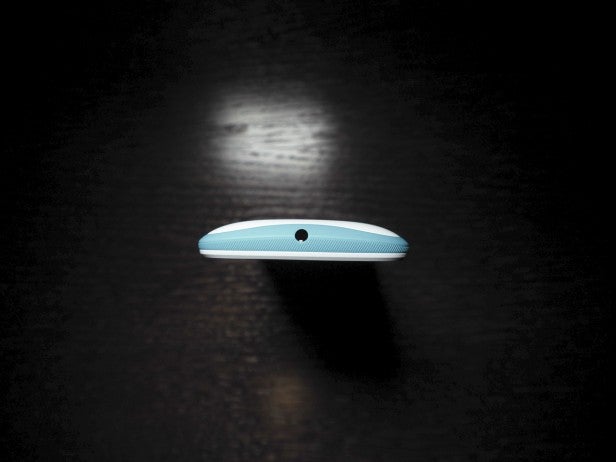 You can’t remove the back cover of the phone, meaning the battery is inaccessible. However, Motorola states that the Moto E has p2i nano-coating, which along with the closed enclosure design of the phone, should offer some basic water resistance, even more so if used with a Grip Shell cover. But we wouldn’t expect this phone to survive being submerged in water, as it doesn’t carry a water-resistant rating like the Samsung Galaxy S5 does.

Internal storage has been doubled from 4GB to 8GB and you can increase that further using an external microSD card, up to 32GB. One significant improvement in the 2nd generation Moto E is the ability to easily transfer games and apps to the external micro SD storage, so you don’t have to clog up the phone’s internal memory. 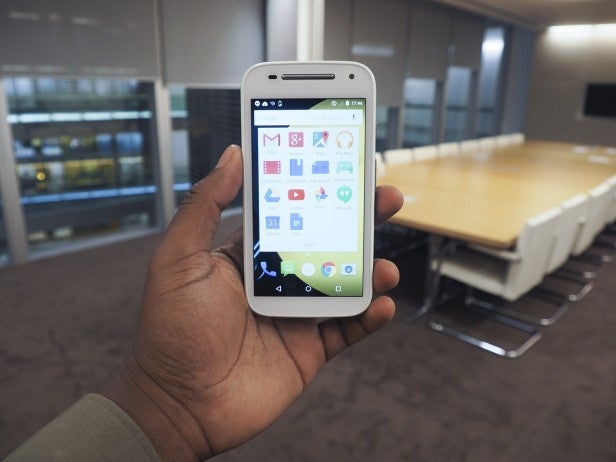 The 4.5-inch, 245ppi (pixels per inch) screen on the 2nd-gen Moto E is about as good as last year’s model, but then last year’s model cost £80 SIM-free and this year’s is £110. The Honor Holly, which costs about the same, has a 5-inch 720p screen that’s larger and sharper. The competition is stronger than ever.

We wouldn’t describe the screen as poor, though – characters and icons are still clear and only appear a little jagged if you look closely. Images and web pages look good for the most part, and colours are reproduced faithfully and without oversaturation.

Contrast is one area where the Moto E could improve, though – the screen is a little flat, and in bright light it’s tough to use, even at full brightness. This is most obvious when watching videos or viewing photos, and a smaller screen isn’t ideal for them either.

All this ignores the fact the Honor Holly doesn’t have 4G, though. The Moto E (2015) does, so you’re essentially trading 4G for a slightly inferior screen. If you want a better screen and 4G, consider the new 4G version of the Moto G (2014). It’s more expensive, but still great value.