The original Moto E carried a 1980mAh battery, which generally lasted about a day and a half of regular usage. This time around Motorola has managed to squeeze in a much larger 2390mAh battery without making the Moto E larger or heavier – it’s witchcraft. 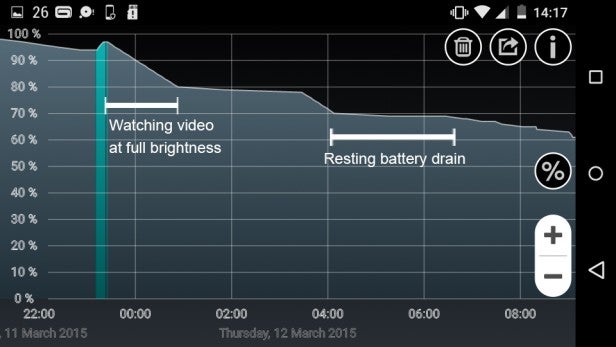 With the larger-capacity battery, plus Android 5.0 and Snapdragon 410’s energy-efficiency boosts, the battery on the 2nd-gen Moto E goes a fair bit further this time – I managed just over two and a half days of regular use, including playing games occasionally and listening to music to and from work everyday. That’s almost double the staying power of the previous model. Perhaps sticking to the same resolution display wasn’t such a bad idea after all.

Used economically, such as limiting internet use and not listening to music much, you could probably stretch the Moto E’s battery life to five days. And if you ever find yourself low on power, a Battery Saver mode limits functions such as background data and vibrations to extend your phone’s life long enough for you get to a charger.

The Moto E’s single loudspeaker sits on the front as part of the earpiece assembly. This means the sound projects toward you, rather than firing backward from the rear or out from an edge like on some phones – we like this.

At full blast the Moto E is loud enough to be disruptive on public transport and clear enough to make out song lyrics from at least five metres away, so its suitable for sharing a song or video with friends in the park, for example. But the quality of it is too tinny for anything with a mid-range melody or smooth bass.

The biggest positive is that audio doesn’t distort violently at full whack, holding up better than you’d expect from a low-end phone. Used during calls, voices are clearly audible whether in an open space or indoors.

One of the main reasons for the Moto E upgrade was to include 4G LTE connectivity, which we’re starting to see more of at the entry-level end of the market.

4G is great because it can hugely improve mobile internet speeds, reducing the time it takes to upload a picture to Facebook from around 20 seconds to less than five for example. Although 4G LTE speeds are gradually becoming the standard, the Moto E is still one of the cheapest 4G phones we’ve seen.

Tested using both 4G EE and Three mobile SIMs, we streamed videos from YouTube almost instantly and experienced snappy web page loading times. We had no dropped calls and found general call quality to be decent on both ends of calls.

Unsurprisingly there’s no NFC connectivity, but Wi-Fi 802.11 b/g/n, Bluetooth 4.0 and an FM radio are all included. 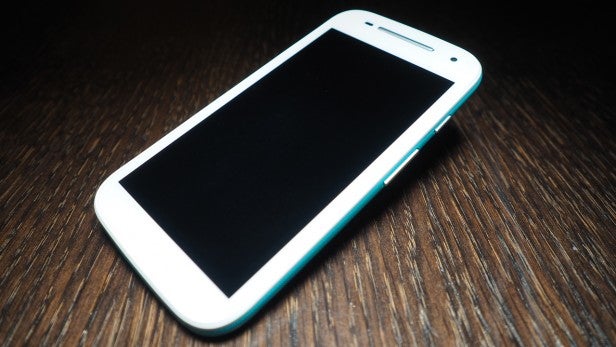 Should I buy the Motorola Moto E?

If you want the cheapest good 4G phone possible, absolutely. It looks great, has class-leading battery life and we love its light, bloatware-free approach to Android. It’s an excellent starting point for anyone buying their first smartphone.

You should consider what’s most important to you first, though. One of the tradeoffs for getting 4G at such a low price is the average cameras and a screen that’s a step below similar non-4G phones at the same price. Neither are bad per se, but you can do better and you might decide 4G is less important to you than these features.

If that’s the case, consider the Honor Holly. It doesn’t have 4G, but it has a larger and sharper 5-inch screen and better cameras front and back. It’s a very good-value option, though it can’t match the Moto E (2015) for battery life – few can. Read our best cheap phone round-up for more options.

The Moto E can’t be beaten for battery life or charm at this price – it’s the best all-round budget 4G phone right now.