What is the Moov?

The Moov is a wearable with a difference. This is not a Fitbit or Jawbone rival that keeps track of your daily activity. It’s worn only during your workout and uses multiple motion sensors to track hand and leg movement more accurately than wrist-based trackers.

Supporting a host of activities including running, swimming and cardio boxing, Moov can be worn on the wrist or around the ankle and offers real-time feedback on whether you’re performing your exercises correctly.

It’s the first generation of the Moov, which has been developed by a former Apple engineer with a second version, the Moov Now on the way with an improved battery and a slimmer more elegant design.

While it’s probably wiser to wait until the new Moov lands, we’ve taken the first one for a spin and it doesn’t take very long to realise that this is wearable that really stands out from the crowd. 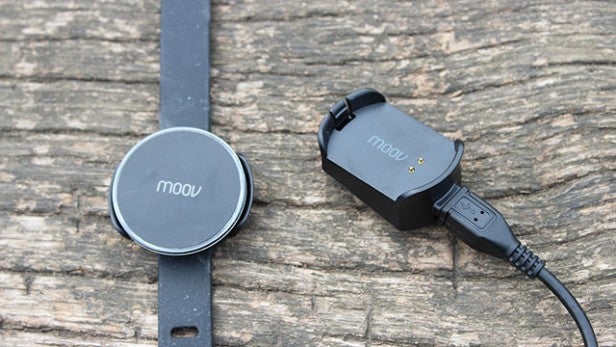 The Moov is made up of a small plastic disc about the size of a 50p coin that comes in either black or white varieties. That disc clips securely into a cradle that’s built into two rubber straps. If you compare it to a Fitbit, a Jawbone or a circular-shaped tracker like the Misfit Flash, there’s a noticeable size difference here. While it’s not the most discreet to wear, it has an attractive minimalist look that’s reminiscent of the Misfit Shine. It’s not designed to be worn all the time so sticking out like a sore thumb when you’re sitting in a meeting is not really an issue here.

Packed into the Moov is a 9-axis motion sensing system and that’s provided by an accelerometer, gyroscope and magnetometer. That’s a similar sensor setup to what you can find inside the LG Watch Urbane and the Fitbit Surge. If you want to track workout intensity, there’s also heart rate monitor support so you can connect a heart rate monitor chest strap like the Polar H7 or an optical heart rate sensor like the one you can find nestled inside in an Apple Watch. But it’s not just about simply tracking your motion data here. The Moov also evaluates the information in real-time and using voice prompts can tell you if you’re on track and offer advice on how to improve your workouts.

There’s no screen built into the Moov, but there’s a transparent ring around the top of the tracker that’ll light up when the Moov is connected to your phone and when it’s tracking. You can customise the colour of the light from within the app settings and it’s bright enough to give you a clear indication of your progress during the day and night. The Moov tracker is essentially a big button as well, so a gentle push is used to begin a workout when you’re prompted to do so in one of the Moov companion apps. 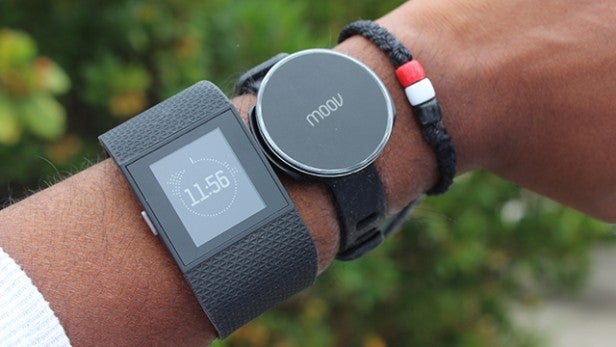 Fitbit Surge next to the Moov

For swimmers, there’s good news. The Moov is IP67 certified dust and water resistant so you can take it swimming and submerge it in water up to one metre depth for up to 30 minutes. We jumped in the pool and in the shower and everything was still in working order afterwards.

In the box you’ll get to two different-sized rubbery silicone straps. The larger one is used to wear the Moov sensor around your ankle. This is aimed at runners and cyclists who want more accurate data when their legs are doing most of the moving. The shorter one is worn around the wrist or further up the bicep depending on what activities you’re trying to track. You can buy additional trackers as well, an extra one will cost you £50, and let’s you track both hands for activities like cardio boxing and swimming.

Both straps adopt the same clasp as the Fitbit Charge and Charge HR for keeping it secure and in place. Granted we have pretty slim wrist and ankles, but we had no issues of the strap coming loose during a workout. It also felt unobtrusive and comfortable to wear. The only real problem with wearing it around your ankle is that does make look like you’ve skipped you’ve breached your ASBO order. 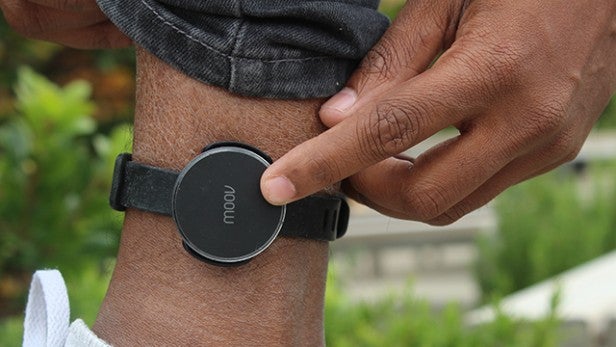 To charge the Moov, you’ll have to use a small charging cradle that clips the disc into place and needs to align the two metal charging pins with the connectors on the cradle. Estimated battery life is around 10 hours so that’s enough for an hour or so of exercise a day for a week. That’s exactly what we’ve found using it over the past couple of weeks. The new Moov now will offer six months battery life as it swaps a built-in battery for a standard removable coin cell battery, On the whole we were happy with the battery life it musters up on a weekly basis and the app does give you clear battery status update.

With the Moov, it doesn’t matter what activity you’re tracking, you’ll need to have your phone nearby. Currently there’s support for iOS an Android, but you’ll get a better experience using an iPhone. That’s because having checked on a Samsung Galaxy Note 4, the Android experience only offers four of the five companion apps at the moment.

Yes, there’s not one dedicated hub for Moov activity. You’ll need to download separate free apps for running, a seven minute+ workout, cycling, swimming and cardio boxing. There’s no sign of third party app support so you can’ sync data from the likes of Runkeeper and Strava. That might disappoint some, but the current crop of apps are a good starting point for the Moov ecosystem. 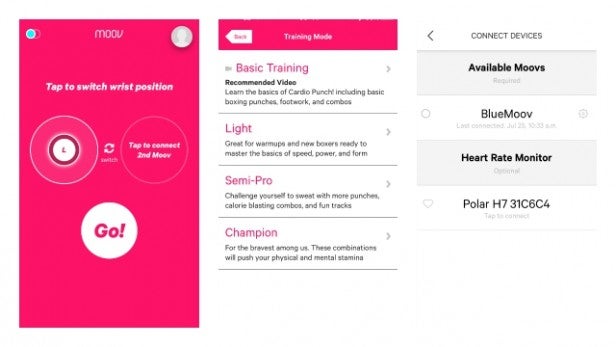 Each of the apps have a slightly different feel. We spent most of our time using the Run & Walk app as well as the Cardio boxing and Swim applications. Unsurprisingly, the running app is the most comprehensive of the lot. The user interface is clutter-free and easy to navigate. The main screen features a huge car-style gauge giving you an indication of how much of the World Health Organization (WHO) recommended 150 minutes of moderate activity you’ve completed for the week. You can also see recorded activity from other apps, so if you’ve done a spot of boxing, it’ll pop up at the bottom of the screen too. There’s also tabs for workout history and a profile section where you can see a breakdown of your workouts. 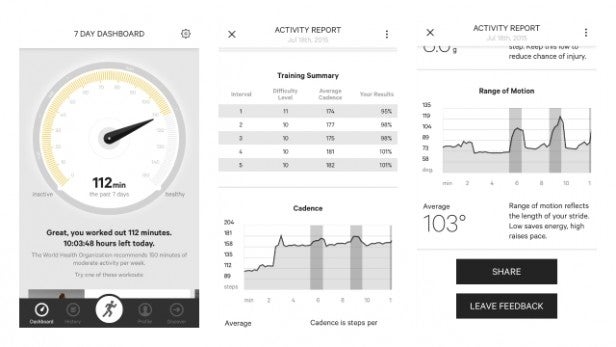 Venture into the other apps and there’a a greater emphasis on jumping straight into the activities. As soon as you launch the app, you’ll be prompted to press the Moov to begin training. Once you’re locked in, there’s a good range of training levels to accommodates a wide range of fitness levels.

Despite spreading the software across several apps, Moov hasn’t done a half-hearted job here, making them all accessible and easy to use straight from the off.

While pretty much every activity tracker we’ve tried recently has focused on simply recording your activity to make those more gradual changes to your lifestyle, Moov takes a refreshingly different approach. By focusing on monitoring only during a workout even for a short period of time, the coaching element really comes into its own.

In the running app, there’s a series of different programs you can test yourself with. There’s sprint intervals, speed endurance, running efficiency, brisk walking and open training. The interval training is the best example of how well the Moov tracker works. Before the program, there’s a concise explanation of the benefits of the workout and the best environment to do it in. Once you get going the voice prompts guide you and pick you up on bad form offering advice like to swing your arms harder or to pick up the pace. 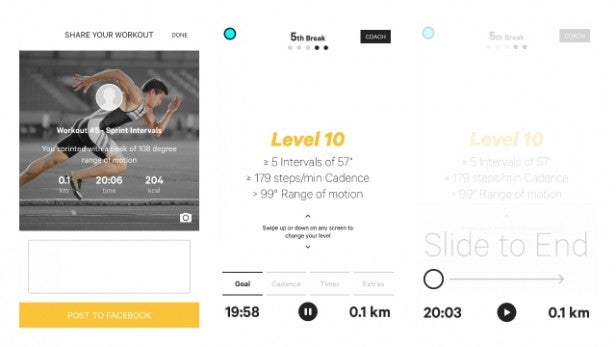 If you think you’ve set the difficulty too high, you can adjust the level to one that’s more within your reach. It’s the same for other activities like boxing. While it’s more effective to have two Moov trackers on for the cardio boxing, it’ll still tell you if you’re punching too slow or to keep your fist up. This really is a coach that will push you and it’s impossible not to get drawn in to push yourself to work harder.

Once your workout is done, it’s back to the apps to review data, and there’s plenty to look over here. In an open training running session you can see details on pace, cadence (steps per minute), impact measured in g-force, range of motion, pace and elevation. That amount of information and data can normally feel overwhelming but everything is explained in a way that’s easy to digest. Data is accurate too. Having tested it with the TomTom Runner GPS sports watch, both up similar data, which we’ve noted below.

Inevitably, coaching doesn’t work perfectly for all of the activities like swimming for example. With no display, there’s no way of knowing how well you’re doing when you can’t look at your phone. Maybe some form of vibration or more sophisticated use of the LED indicator could go some way to addressing the need to have your phone nearby.

All of this data can be shared on Facebook, however it’s lacking a comparison tool to see improvements on previous runs. For other activities, you’re getting the same comprehensive stats letting you see how well you’ve done in a range of areas. 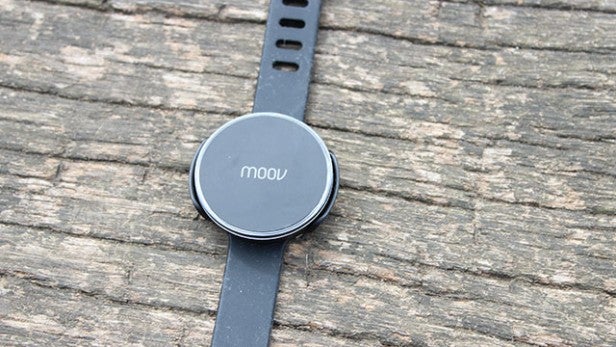 Should I buy the Moov?

As we’ve already mentioned, the Moov is set to be replaced by a smaller, more discreet and longer lasting model in the not too distant future. That being said, this is one of the most interesting wearables we’ve slapped on for a very long time.

We can live with some of the design shortcomings because the coaching element is so good at what it does. Recorded data feels so much more meaningful and useful as well and far more insightful than what you get with daily activity trackers.

At the moment, the Moov is pretty much out on its own for what it can do. Products like the GymWatch and Atlas Wearable offers similar coaching features, but the Moov is more versatile, covers a wider range of activities and is further down the line as a product than its closest competitors.

As the company embarks on its second gen wearable, the original Moov proves that this more than just a concept. This is a wearable that really works and should be the template for other fitness-focused wearables to follow.

With a new version on the way, it would be wise to hold off, but the first-gen Moov is a wearable that really can coach you into getting into better shape.