Hands on with the Atlas Wristband fitness tracker

The Atlas Wristband is one of the oddest-looking fitness trackers I’ve tried on. It’s like a Withings Pulse O2 except with the display positioned horizontally.

Beyond the unique design, though, there does lie an intriguing wearable that raised over $600,000 on Indiegogo. Available to pre-order for $250 (around £160), it offers much more than your average fitness tracker, all without having to be tethered to a smartphone. Whether you’re a swimmer, a runner or spend most of the time in the gym in the weights section, you should find something that appeals with the Atlas. 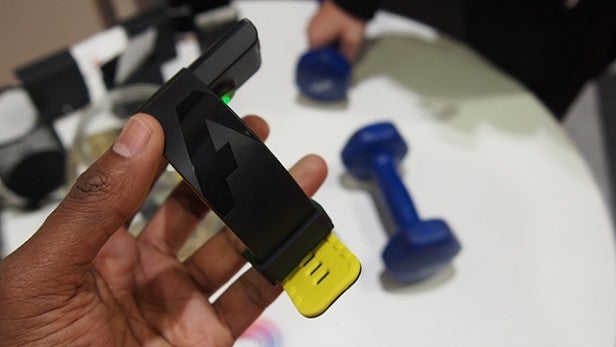 If you prefer your trackers to be sleek and discreet however, look elsewhere. While the silicone strap is slim and feels comfortable to wear, it’s the horizontal OLED display that sticks out like a sore thumb. Speaking to CEO Peter Li, the decision was made to make it easier to read when you’re working out. I’d agree with the point Li makes, but it just doesn’t make for a very elegant design. It’s a bright and easy-to-view screen at least, and touchscreen support is going to be included in the final version as an additional way to move through screens.

Around the display, you’ll find an on-off button and a covered Micro USB charging port to power up the 120mAh battery. That should be enough to get you through seven hours of workouts. One of the most surprising features is that it’s waterproof up to 50 metres, so you can go swimming with it and it can actually track strokes as well as analyse endurance in the pool. 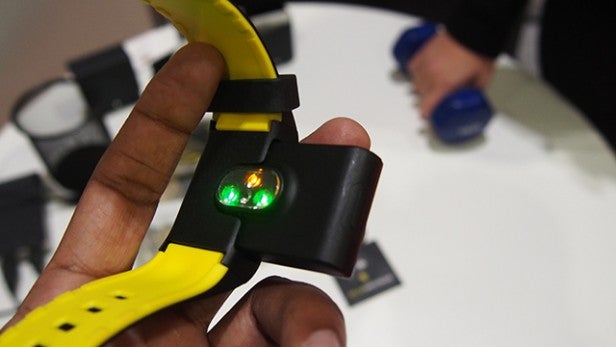 Powering the Atlas are two 32-bit ARM M4 processors, while the sensors used to track movement sound very familiar. There’s a 3-axis accelerometer and a 3-axis gyroscope, which Atlas says can offer 3D motion tracking to identify activities like different varieties of push-ups or dumbbell reps. A light-based optical heart-rate sensor on the back can relay BPM (beats per minute) data in a similar fashion to the TomTom Runner Cardio sports watch.

There are three different modes you can use the Atlas in. Freestyle tracks real-time data on things like rep count, sets, heart rate, calories burned and form recorded. The Coach mode will let you pick from a range of routines available to view through the companion app. It’s here that you can utilise the clever vibrating smart-timer feature, which has the ability to record active time, resting time and the amount of time spent doing an exercise. This makes sure that you’re doing a rep properly and not slacking near the end of a set. For basic data tracking, the Watch mode will keep you up to date on step count and distance during the day, like a standard pedometer. 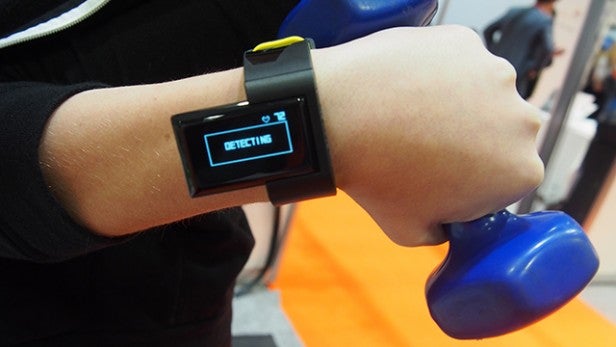 One of the issues with tracking exercises is that not everyone does press-ups the same way. Li says the solution to that is preloaded data from professional trainers to recognise the different methods. The Atlas also has the ability to learn new exercises and movements. With the help of users uploading exercises, it will also be able to support new exercises to add to the database.

As already mentioned, you don’t have to have a smartphone to use the Atlas, but there’s a companion app for Android and iOS that syncs over Bluetooth Smart. Here you can look at recent muscle groups worked and infomation on how quickly the heart recovers after certain exercises. There’s also the ability to share workout data to compare with other Atlas users. Third-party app support currently includes MapMyFitness and Fitocracy, but the open API means others have the ability to add compatibility.

The Atlas is one of the most feature-packed fitness trackers I’ve seen. Apart from the Indiegogo-funded GymWatch, there’s not a high-profile wearable currently available that can offer the ability to monitor weight training and exercises in the way that the Atlas promises to. The smart timer is a great feature and the swim tracking is a nice added bonus as well.

My main issue is with the design. It’s like a protoype that still needs some finessing, despite the seemingly strong build quality. There’s definitely going to be an interest in something like the Atlas, I’m just concerned some might be put off by its quirky looks.